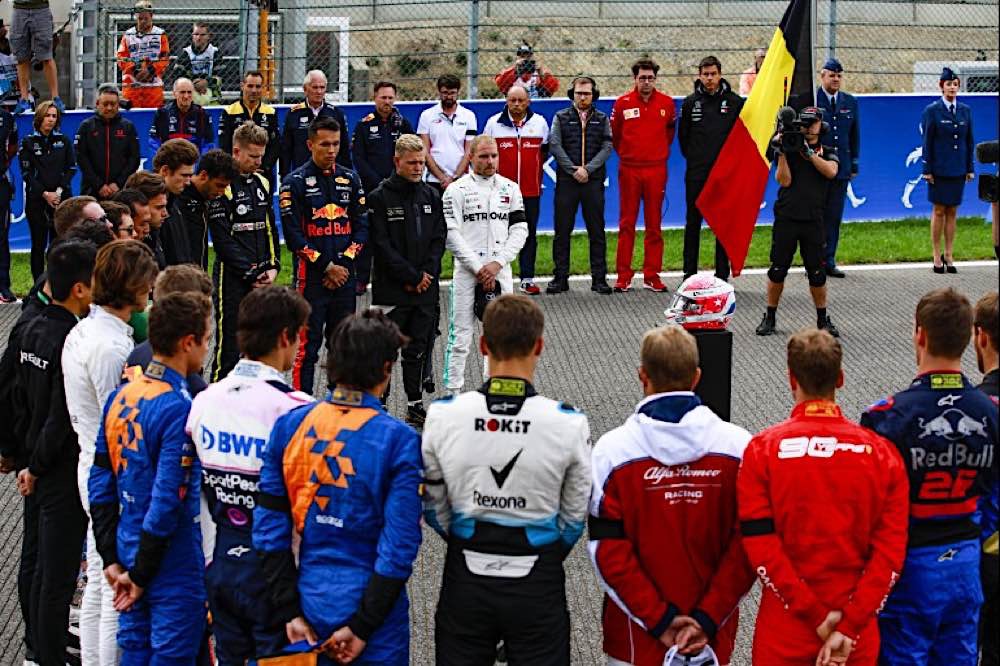 Respect is paid to Anthoine Hubert. The crowd showed their feelings on lap 19. 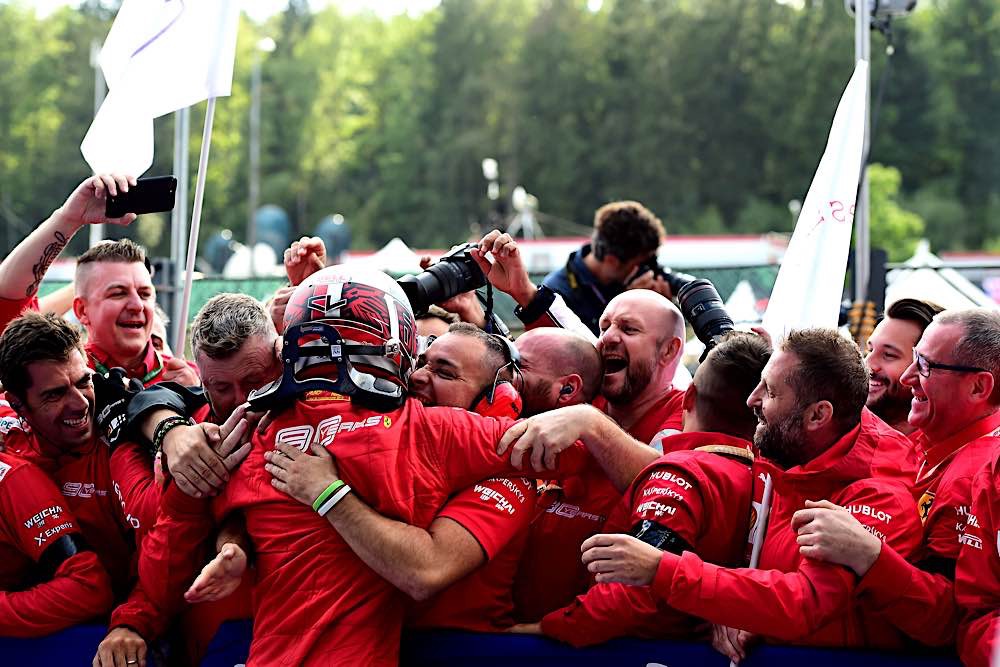 Joy for the team as Charles takes the first win 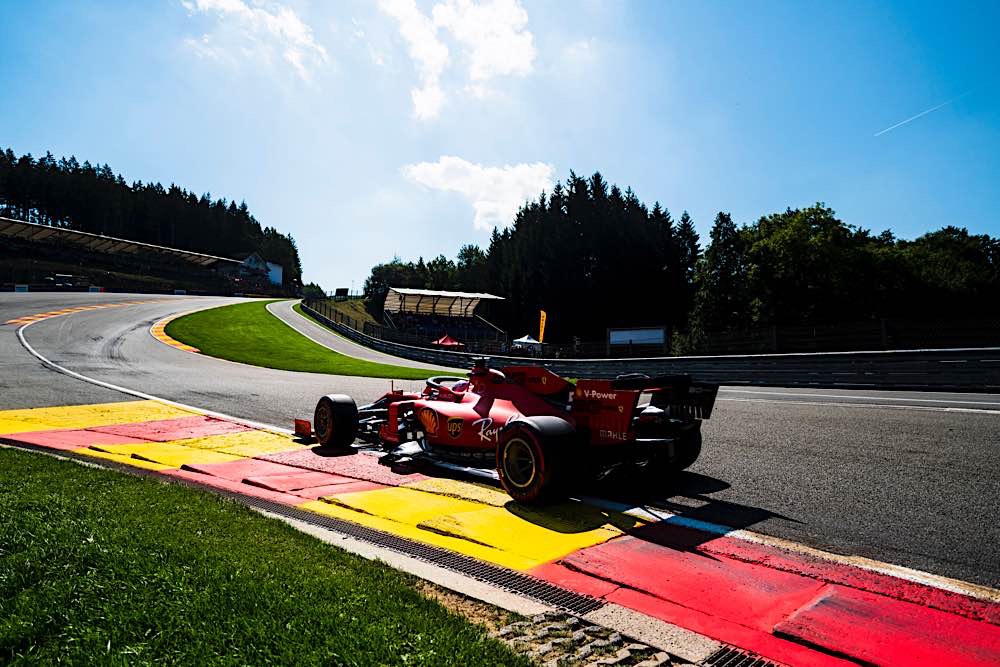 Although it's been flat for some years now, Eau Rouge is still the essence of Spa

It would be wrong to start any report of the Belgian Grand Prix without paying tribute to Anthoine Hubert, the 22 year old Lyon-born 2018 GP3 champion and a popular figure in the F2 paddock. A contemporary of Leclerc, Gasly and Ocon in karting, he was supported by Renault Academy and run by Arden in Formula 2. He died in what must be regarded as a freak accident, after being struck at Raidillon in the side by another car at approximately 160mph; even in the strongest cars, such accidents are simply not survivable. This website would like to express the sympathy and thoughts of all members and readers to Anthoine’s family and friends.

The tragedy meant that a pall was cast over all events of the weekend. In other circumstances there would have been joy for Charles Leclerc as he qualified 7/100sec ahead of Vettel. The team had been dominant in practice, as was expected due to the car’s power to drag ratio. Whether this should have been slightly compromised to gain a bit of extra grip might have been questioned on Sunday, but there was no doubt that the combination was simply perfect on Saturday. So why was Seb 65 hundredths behind Charles and only 15 hundredths ahead of Hamilton’s newly rebuilt car from a P3 off? Broadly, traffic and getting out of rhythm. Except that Charles threw strategy out of the door and just got on with it, ignoring the strategic tows. Bottas was 4th, ahead of Verstappen in 5th, engine not running quite right despite Verstappen’s habitual neck-wringing style. Two Renaults in 6th and 7th was a surprise, while Raikkonen, Perez and Magnussen completed the top 10.

So what of the newly promoted Albon? Due to engine penalties  he was expecting to be at the back of the grid, so concentrated on getting a race setup and was 14th. Certainly better than poor Kubica whose new spec Merc engine blew up soon after leaving the pits.

At this time of year, with engine penalties racking up, the grid bears little resemblance to qualifying. The best illustration of this eccentricity was Sainz, with a 5- and a 10-place penalty, who ended up two places higher than he’d qualified.   One of the sidebar pictures shows the ups and downs of grid versus qualifying. Good luck following it. I’ve only got a degree in maths so expect no help from me.

Having reported on Spa since before several current drivers started primary school, I’ve always anticipated the race and often been disappointed as it’s been deadly dull. That wasn’t the case this year. Whilst Charles led the way fairly imperiously, Seb was initially passed by Hamilton at the start. The superiority in speed of the SF90 showed on Kemmel Straght as Seb swept back past. Behind them, a slow starting Verstappen tried to make up places at the start and over-optimistically tried to dive inside Raikkonen at La Source. Although deemed to be a racing incident, many thought Verstappen to be the guilty party. Fate punished him at Eau Rouge as the track rod gave way and he went into the barriers. This all let Norris up to 5th from 11th on the grid while his team-mate Sainz limped to the pits with an engine problem as the safety car was deployed. He limped around again and stopped at the Bus Stop leading to another safety car which last until the fourth lap.

When racing re-started, Hamilton again hassled Seb, but was repulsed. This gave Charles the chance to build up a good lead, even when a slight error at Les Combes caught him out. Around about this time the strategists started working even harder than usual. The Ferraris were clearly much faster than the Mercs but were wearing the tyres (especially rears) faster. The calculation was not only where the lines would cross but whether making Hamilton work harder to get in a position to pass Charles would have the required serious effect. The conclusion must have been that it would, and Seb played the role of loyal wing-man, taking one for the team. On lap 15, new tyres went on. It was a long game, which when Charles came in on 21 and Hamilton on 22 (a slow stop by an extra second or so) it gave Seb the lead. He held it for just 4 laps, Charles passed him by team orders.  Charles resumed the lead on 27, while the hard work Seb had put in meant a second stop on lap 33, the last pits stop of the race. Even with new tyres, it was too little, too late and Seb couldn’t get past Bottas so stayed in 4th. He did, however, get fastest lap.

At the front Charles continued with a strong lead. But the Merc was easier on its tyres than the SF90 and as the end grew closer so did Hamilton get closer to Charles. Not helped by lapping the midfield/tailenders, he found himself only a couple of seconds ahead of a strong Hamilton with 2 laps to go. Those were very long laps for spectators, and must have been even longer for Charles. It looked as though Hamilton might be within range on the penultimate lap at the Bus Stop, but Charles kept his head and finally took that much anticipated maiden win. A win which was not just due to a better car and better strategy but was also due to a level headed maturity. The supreme driving talent we’ll take as a given. Bottas and Seb came in behind.

Lando Norris’s first lap promotion to fifth had been a solid, unchallenged place for 43 laps. But right at the end the engine misbehaved. It died as he entered the final lap, dropping him ironically to his grid place of 11. This promoted Albon. He’d spent the first half of the race at the mid-back of the field but with a late-ish pit stop on lap 23 he started moving forward. From 14th on his pit exit he made up a place a lap until lap 34 to be 8th and then picked off Kyvat and a ve-e-ery wide Perez (partly on the grass) to then inherit 5th. Not a bad start in the big time. Perez, Kyvat, Hulkenberg, Gasly and Stroll made up the top 10. The Alfa’s deserve mention for having a bad day. Raikkonen recovered from the Verstappen assault to complete the race despite aero damage, but 16th, while Giovanazzi had a similar bad day to Norris as the last lap bit him with an off at Pouhon and a DNF.

It goes without saying that Charles showed very mixed emotions arising from his victory. There was delight for a first win. He is the youngest driver to take pole and a win at Spa and the youngest to take a Grand Prix victory in a Ferrari. But he rightly took the opportunity to remember Anthoine Hubert. “I grew up with Anthoine, and we competed in our first karting race together with Pierre Gasly and Estaban Ocon in 2005. These are memories I will keep forever. He was a champion and this victory is for him.”