A Special Livery for Ferrari 1000 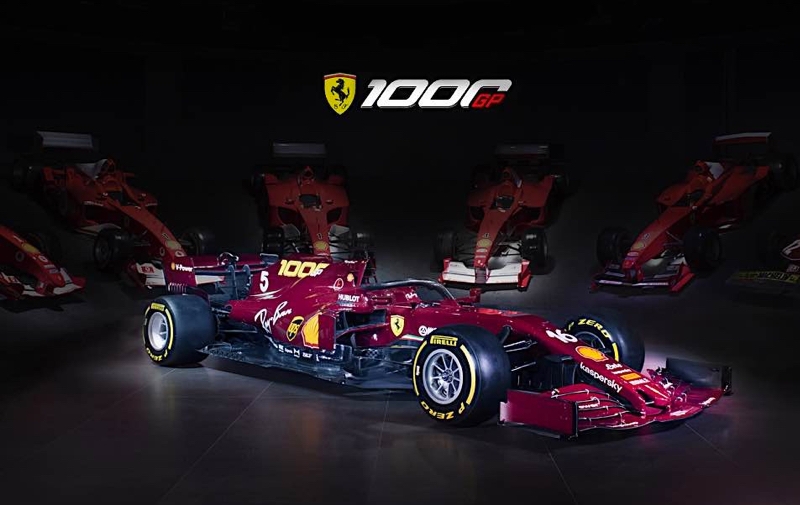 This article is an extract from Ferrari Media

Our most eagerly awaited moment of the year has arrived as Scuderia Ferrari prepares to tackle the 1000th Grand Prix in its history. Not only that, but this milestone takes place at the Mugello Circuit, the facility owned by the Maranello marque, which gets to host a round of the blue riband category of motor racing for the very first time.

The Maranello marque has planned several initiatives, starting with a celebratory livery. Over the weekend, the SF1000s will feature a Burgundy colour, which is a faithful reproduction of the shade of red of the very first Prancing Horse car, the 125 S, and of  the 125 F1 which took to the track in the Monaco Grand Prix on 21 May 1950. For the past 71 years Ferrari has been ever present in every year of the championship. Charles Leclerc and Sebastian Vettel will also have special race suits for this unique race and in this time of Covid-19, a limited number of fans – 2880 – will be allowed into the grandstands from Friday onwards, all socially distanced, a sign of confidence and renewal. The celebrations will spread to nearby Florence with an event in the heart of the city on Saturday evening. Then on Sunday, before the race start, Mick Schumacher, a Ferrari Driver Academy (FDA) student will take to the track at the wheel of an F2004 that his father Michael drove in his last championship winning year: a fitting tribute to the Scuderia’s most successful car and its incomparable driver.

Opened in 1974 as a natural evolution of the Circuito Stradale established in 1914, the track is laid out in the hills of the municipality of Scarperia and San Piero a Sieve. The 5.245 kilometre Mugello circuit has long been one of the favourite circuits for drivers in all motor sport disciplines and has been owned by Ferrari since 1988.

Piero Ferrari, Vice Chairman, said: “Scuderia Ferrari’s 1000th Grand Prix is a very important milestone, therefore it had to be marked in a special way. That’s why we decided to run a unique livery on the cars for this event, with the SF1000s taking to the track at the Mugello Circuit in the Burgundy colour first seen on the 125 S, the first racing car to carry the Ferrari name. Even the look of the race numbers on Charles’ and Sebastian’s cars will reflect the tradition of the past, giving the impression of being hand painted onto the bodywork, while the drivers’ race suits will also match the car colour.
It’s a tribute to our origins: to our starting point for the amazing Ferrari story, characterised by an endless desire to compete, alongside the will to build road cars that are exceptional in terms of technology and design. Ferrari is unique in the world, because the company has the soul of a car manufacturer and of a racing team, an inseparable link that is never questioned.

Only a few months ago, no one could have imagined that our thousandth race could take place at our own Mugello circuit. I am pleased that in the Grand Prix official name, Formula 1 chose to pay tribute to Ferrari, the only team that has always been present in the sport’s seventy one year history.

14.5. Times round the circumference of the earth, which corresponds to the 580,000 or so kilometres that Ferrari cars have covered in 999 Grands Prix held to date. Of these, almost two (just under 80,000 km) have been led by Maranello cars.

18. The nationalities of the 110 drivers who have been entered in at least one Formula 1 Grand Prix at the wheel of a Ferrari. Of these, 96 went on to actually race. The country which has fielded the most Ferrari drivers is Italy with 32, including double world champion Alberto Ascari. Next is Great Britain on 16, including 1958 champion Mike Hawthorn and the 1964 champion John Surtees, France and the United States with 11, including 1961 champion Phil Hill. Five were German including Michael Schumacher and his five titles with Ferrari and of course Sebastian Vettel, currently in the team. There have been four Argentines, including 1956 champion Juan Manuel Fangio; two Austrians and Finns, with two titles for Niki Lauda in 1975 and 1977 and one for Finn, Kimi Raikkonen in 2007. Just one South African has raced for the Scuderia, with Jody Scheckter winning the championship in 1979.

2180. The number of GP appearances for Ferrari cars that have raced over the 999 Grands Prix of the Maranello marque’s time in Formula 1 to date. The year which saw the largest number was 1953 when the 500 F2 became the most commonly used car in the championship, also run by three privateer teams during the season. In eight of the nine races (no Ferraris took part in the Indianapolis 500) Ferrari had 46 entries.