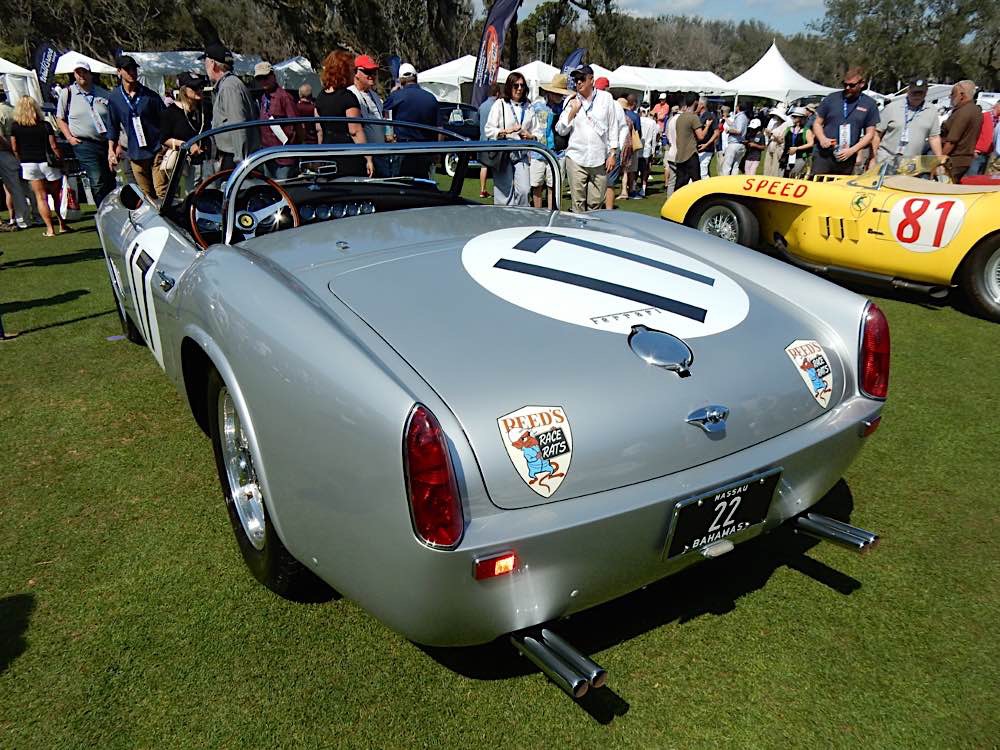 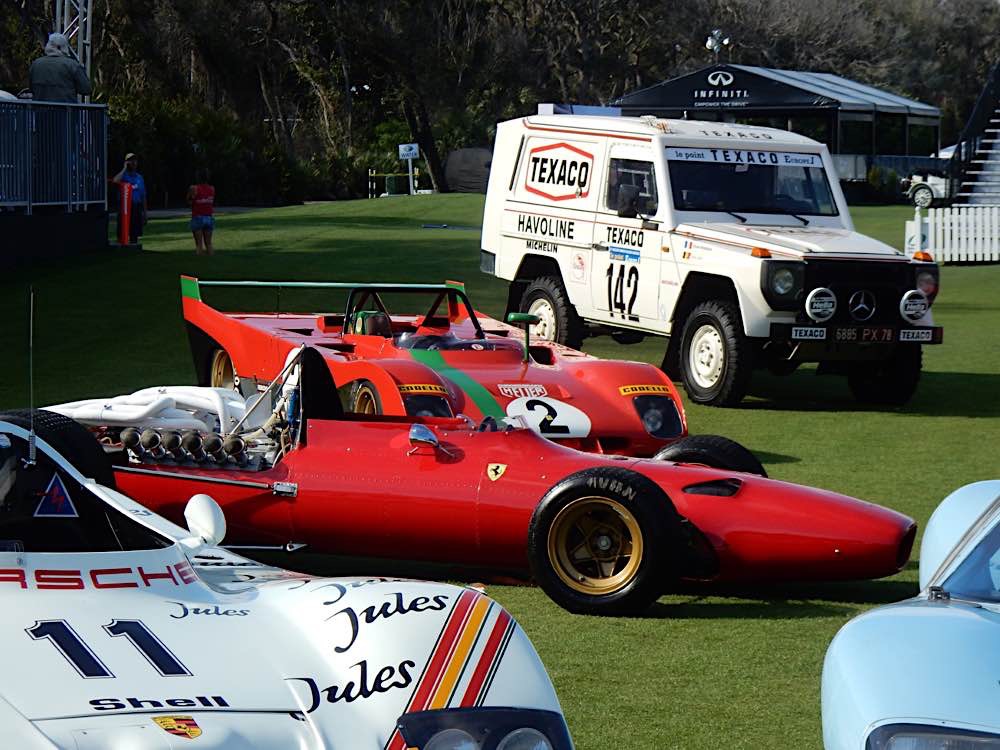 A tribute to Jacky Ickx 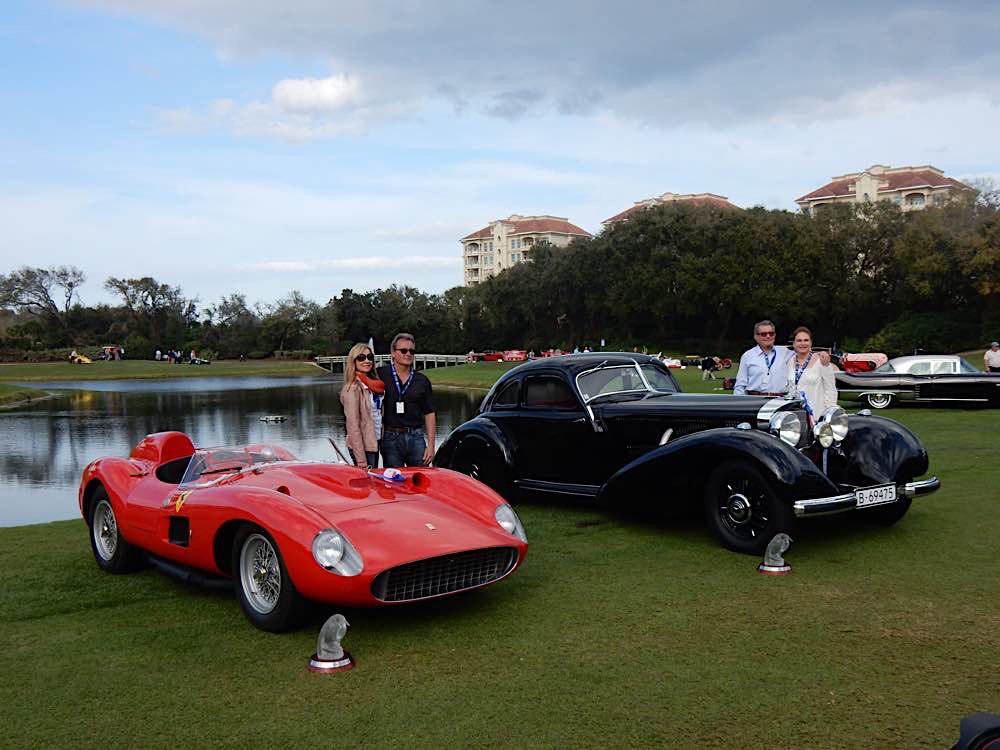 Report and pictures by Keith Bluemel

After the rescheduling necessary due to the inclement weather forecast in the past two years, the 24th annual Amelia Island Concours d’Elegance was blessed with fine weather for the duration of the event, allowing everything to run to the original schedule, much to everyone’s relief. Thus the 10th and 18th fairways of the Golf Club of Amelia Island, adjacent to the host Ritz-Carlton Hotel, once again hosted the concours in its normal Sunday slot.

The Honouree for the 2019 event was ex-Ferrari and Porsche works driver, and six time winner of the Le Mans 24 Hour Race, Jacky Ickx, who also has the 1979 CanAm Championship crown and a Paris-Dakar rally raid win on his CV. The feature classes this year were a celebration of the Porsche 962, the Mercedes-Benz 500K – 540K series, the Jaguar XK 120 and 50 Years of the NHRA Gainesville Raceway. Aside from the feature classes, each year concours founder and Chairman Bill Warner and his team always come up with an eclectic mix of classes, often quite off the wall. 2019 was no exception, of course there was a class for the cars of the honouree, then there was a class for custom VW Beetles, another of the cars of POSIES, aka hot rod builder Ken Fenical, one for the 60th anniversary of the Ferrari 250 GT SWB Berlinetta, one for Heads of State cars and one for Cars of the Rock Stars. Add in all the regular classes, and there was an enormous variety of cars and motorcycles on the show field for everyone’s delectation, ranging from a 1903 Holsman Type 3 in the Horseless Carriage class to a 2000 Porsche 911GT3-R in the Cars of the Rock Stars class.

Apart from all the cars and motorcycles entered in the concours, there were numerous manufacturer displays, notably those from Acura, Aston Martin, BMW, Cadillac, Infiniti, McLaren, Mercedes-Benz and Porsche, some of whom were also offering test drives in their latest offerings. There was also the free to enter MotorXpo show across the street, with another raft of automobiles to be viewed, including a supercar display. One mustn’t forget the Cars & Coffee gathering presented by Heacock Insurance, which is held on the main show field on the Saturday morning preceding Sunday’s main event, which provides local enthusiasts with the opportunity to display their cars in convivial surroundings with like-minded folk.

If one was still left wanting for further choice, there was also the official auction of the event courtesy of RM Sotheby’s, together with a further three major auctions in the area running consecutively, namely Gooding & Company at the nearby Amelia Island Plantation, whilst the Fernandina Beach Golf Club was the venue for Bonhams, with newcomers to the event Russo & Steele just across the roadway from them at Fernandina Beach Municipal Airport. All had a diverse array of offerings, and Russo & Steele pronounced themselves pleased with their inaugural auction, where a 1955 Mercedes-Benz 300 SL “Gullwing” achieved $1,155,000. Over at Bonhams the highlights were a broad selection of “Brass Era” cars, many of which achieved well above their estimate prices, and a 1968 Brabham-Cosworth BT26 F1 car achieved $1,105,000, with the auction having an 84% sell-through rate for total sales of $16 million. At Gooding & Company their 10th Amelia Island auction realized $22,047,980, with an 88% sell-through rate, and six $1 million plus sales, with a 1930 Packard 734 Speedster Runabout drawing the highest winning bid of the day, selling for $1,765,000. Of their top ten sales, apart from the Packard, six were Porsches, two were Ferraris, a 250 GT Lusso and a 275 GTS, together with a 1965 Shelby Cobra. It was RM Sotheby’s 21stAmelia Island auction, and they posted a sell-through rate of 84% with a total sales figure of $38.1million, with both classic and modern cars achieving strong sales figures. A 2015 McLaren P1 sold for $1.49 million, whilst the top sale over all the auction houses was the $2.205 million achieved by a 1965 Ferrari 275 GTB.

Back on the show field, as noted there were some unusual and quirky offerings, probably none more so than the wrought iron bodied VW Beetle in that model’s Custom class. Yes, you read correctly, a wrought iron body, well really more of a lattice work, but it was fully driveable. The idea came about in the late sixties, when an employee at the VW factory in Mexico, Raphael Esparza Prieto, who was also a skilled metalworker, was asked by his boss to make a wrought iron display outline of a Beetle as a display feature above the parts store. This caught the eye of senior management and customers alike, and he was asked to build a fully operational version, which the company used as a promotional tool at the 1968 Olympic Games in Mexico City. In fact there were two cars built by him for the games, and they attracted worldwide attention, with eventually some twenty examples being constructed as promotional tools by dealers around the world. In the Cars of the Rock Stars class, there was the famous Janis Joplin Porsche 356 SC Cabriolet with its psychedelic paint job, plus another novelty worthy of note. This was a Porsche tractor decorated like the 917 model that ran at Le Mans in 1971, nicknamed the “Pink Pig”. Not only was the tractor painted in the cuts of pork livery, but it was fronted by a quintet of similarly painted pedal car tractors with names like Porky, Miss Piggy and Wild Hog, with alongside a pair of guitars featuring the same paint scheme.

Lest it be thought that there was a lack of Ferraris, don’t worry, there were two classes for them, one for the featured 250 GT SWB Berlinetta model, which had seven examples, including the unique Bertone bodied example, chassis # 1739 GT, the Pininfarina “Speciale” bodied chassis # 2429 GT, together with an example of the LWB “Interim” model, chassis # 1377 GT, which was the forerunner of the definitive SWB body style. The second Ferrari class was for GT road cars, which spanned from a 1952 212 Export Cabriolet, chassis # 0110 E, through to a 250 GT SWB California Spider, chassis # 3293 GT. Naturally there were examples in the Cars of Jacky Ickx class, these being a pair of 312 P(B) models an 312 F1 car, whilst there were also further examples in other classes, notably the 335 S sports racing car, chassis # 0674, in the Race Cars (1948-1957) class.

At the end of the day, after all the various class, corporate and special awards had been handed out to the winning recipients, it was the trumpet fanfare for the announcement of the Best of Show awards. The Concours de Sport Award was won by the 1957 Ferrari 335 S sports racing car entered by Cavallino Investments, whilst the Best of Show Concours D’Elegance Award was won by the 1938 Mercedes-Benz 540K Autobahn-Kurrier from the Keller Collection at the Pyramids in California.