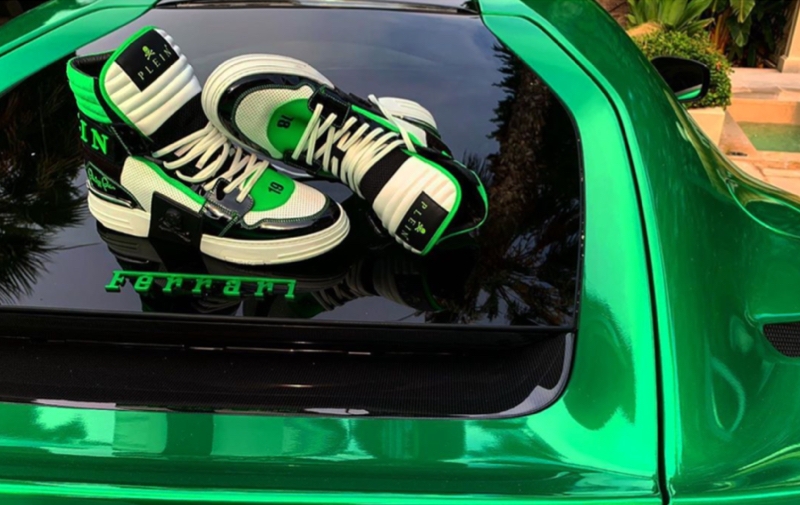 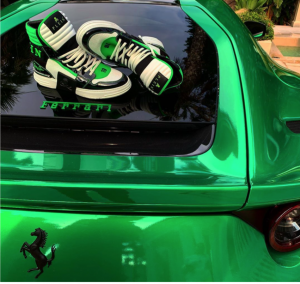 This story first appeared in The Fashion Law (Pic:Philipp Plein)

Ferrari wants Philipp Plein to stop positioning the wares of his fashion brand alongside its pricey cars – that Plein owns. In a letter that the German fashion designer received this week (and swiftly posted to his Instagram account and called, “Blackmail!”)), counsel for Ferrari is none too pleased that he is using its wildly famous trademarks “for promotional purposes of [his] brand and products,” thereby, “unlawfully appropriating the goodwill attached to them.” Of particular concern for Ferrari’s legal team? The images that the over-the-top designer is posting to his Instagram account.

According to the cease and desist letter that Plein received on Monday, Ferrari is taking issue with his use of images of its Italian-made sportscars alongside products from his 15-year old eponymous label, and the automaker’s counsel is troubled by a specific photo: one that features a limited edition pair of Plein’s $800-plus PHANTOM KICK$ sneakers sitting atop of Plein’s $350,000-plus green Ferrari 812 Superfast, with Ferrari’s word mark and legally-protected prancing horse logo front and center.

In the letter, Ferrari’s outside counsel Fabrizio Sanna of Orsingher Ortu Avvocati Associati asserts that Plein’s pattern of using images featuring Ferrari’s prized trademarks aligns Ferrari “with a lifestyle [that is] totally inconsistent with [its] brand perception,” namely due to the connection with “performers making sexual innuendos and using Ferrari’s cars as props in a manner which is per se distasteful.”

If you recall, it was not all that long ago that Plein paid “Chris Brown, who’s faced felony charges for rape, sexual battery and assault (among countless other allegations) to take the stage [at his S/S18 fashion show] alongside Tekashi 6ix9ine, the rapper currently facing jail time for pleading guilty to sleeping with an underage girl and filming the act,” per GQ.

Plein’s behavior, according to Mr. Sanna, is “harmful and serious,” in large part because it “tarnishes the reputation of Ferrari’s brands and causes Ferrari material damage.” More than that, “The undesired connection between Ferrari’s trademarks on the one hand, and Philipp Plein’s line of shoes and the questionable manner in which they are promoted, on the other hand, is interfering negatively with the rights enjoyed by Ferrari’s selected licensees, which are exclusively entitled to sue Ferrari’s trademarks to produce and promote [footwear] that is Ferrari branded.”

With this in mind, Sanna “formally asks” Plein to remove the images at issue “no later than 48 hours from the receipt of this letter,” and states that Ferrari will bring such “unlawful, unfair and harmful behavior to the attention of the Courts.”

In his Instagram post on Monday, Plein, who has opted not to remove the images at issue, stated, “I can’t even put in words how disappointed and disgusted I am about this unfair and totally inappropriate claim against me personally,” noting that he purchased his first Ferrari 10 years ago and remains a “good client” of the company. “If you want to continue treating your loyal clients with such letters from your lawyers, you will lose the support from many Ferrari fans.”

Plain did not leave it at that, though, going on to accuse the famed automaker of “blackmailing” him for threatening to initiate legal action.

As for whether the nearly 80-year old Ferrari has a legal leg to stand on, it just might. While it is generally acceptable make use of brands’ trademarks in a descriptive, decorative, or other, non-source identifying capacity (which is why they tend to appear in movies, music videos, and even other brands’ ad campaigns without issue), there appears to be more going on here than that. Just as in the U.S., the holder of a registered trademark in Italy has the right to prevent third parties from using identical or similar trademarks for identical or similar products or services.

Given the positioning of Plein’s footwear in the photo – i.e., right next to the Ferrari logos, and with the coordinating colors in mind, consumers might be led to believe that the two brands are working in collaboration for Plein’s footwear collection or are otherwise affiliated in some way, which would give rise to merited claims of trademark infringement. (Although, it is worth noting that in accordance with European Union trademark law, for well-known marks, it is not necessary for the plaintiff to demonstrate a likelihood of confusion if the unauthorized use “seeks to ride on the coat-tails of the mark with a reputation”).

Trademark infringement claims are particularly relevant since Ferrari maintains an arsenal of valuable trademark rights and registrations across the globe for its name and logo for use on footwear, and has a long history of stamping its prancing horse logo on everything from Tod’s loafers to Oakley sunglasses as part of its various retail partnerships and 60-plus license deals, the latter of which see third party manufacturers manufacture and market products with the Ferrari name and logo on them. Still yet, as the holder of trademark rights, which to a large extent require meticulous and vigilant enforcement, the duty is on Ferrari (and Ferrari alone) to initiate such efforts to stomp out unauthorizes uses that might chip away at the value and distinctiveness of its marks.

In terms of the tarnishment argument that Sanna makes, in a manner somewhat similar to trademark dilution in the U.S., EU trademark law provides protection against the unauthorized use of trademarks when such use “would take unfair advantage of, or be detrimental to, the distinctive character or the repute of the earlier well-known trademark.” Since Ferrari is one of the most famous luxury brands in the world, its marks certainly would be considered “well-known,” and it likely has merited claims in both instances.

Putting the merits of Ferrari’s trademark claims aside, it is worth noting that Plein’s very public response to the car company’s letter highlights an important element in modern legal practice: aggressive enforcement of one’s trademark rights – or what is perceived as aggressive enforcement – very well may result in a public relations fall out. As such, brands increasingly need to weigh their options carefully when it comes to their specific enforcement efforts and consider the chance that their cease and desist letters will end up on social media.

As Georgetown Law professor Madhavi Sunder recently wrote for Harvard Business Review, “Companies should consider how efforts to shut down unlicensed fan activity may backfire,” referring to the boundless examples of intellectual property rights holders enforcing those rights when it comes to popular franchises. She points to examples: “J.R.R. Tolkein’s estate shut down an unlicensed Lord of the Rings summer camp. DC Comics enjoined a custom carmaker from making and selling real-life replicas of the Batmobile. Warner Bros. shut down a venue that emulated The Great Hall at Hogwarts. A year ago, Netflix sent a cease-and-desist letter to the owners of an unauthorized Stranger Things pop-up bar in Chicago.”

“The law of intellectual property, which was intended to stimulate the creation of artistic works for humanity to enjoy, is being stretched by companies to commodify more and more forms of that enjoyment,” Ms. Sunder states. “Really, companies ought to be pinching themselves that their fans want to bring their fictional worlds to life.”
Certainly, there is a difference – both from a practical standpoint and a legal one – between Plein as a brand owner with 1.8 million followers and a global company that, as of last year, was bringing $300 million in annual revenue, and an individual who hosts an unlicensed Disney princess-themed birthday party or a Stranger Things-themed pop-up shop.

However, unfortunately for Ferrari and its very-valuable trademark rights (assuming this does not go down well), regardless of whether its approach is legally appropriate (and it almost certainly is), the mob that is social media quite often lacks the willingness and/or the ability to make such distinctions. So, let the potential PR mess ensue …
Counsel for Ferrari told TFL that they are “unable to comment” on the matter.