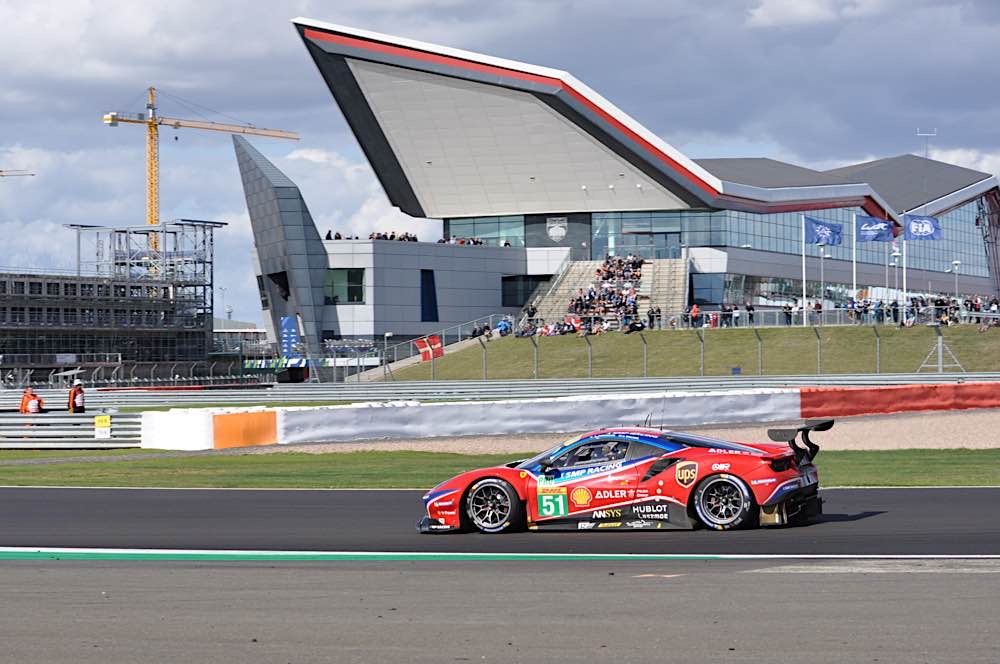 AF Corse LMGTE in front of the Wing 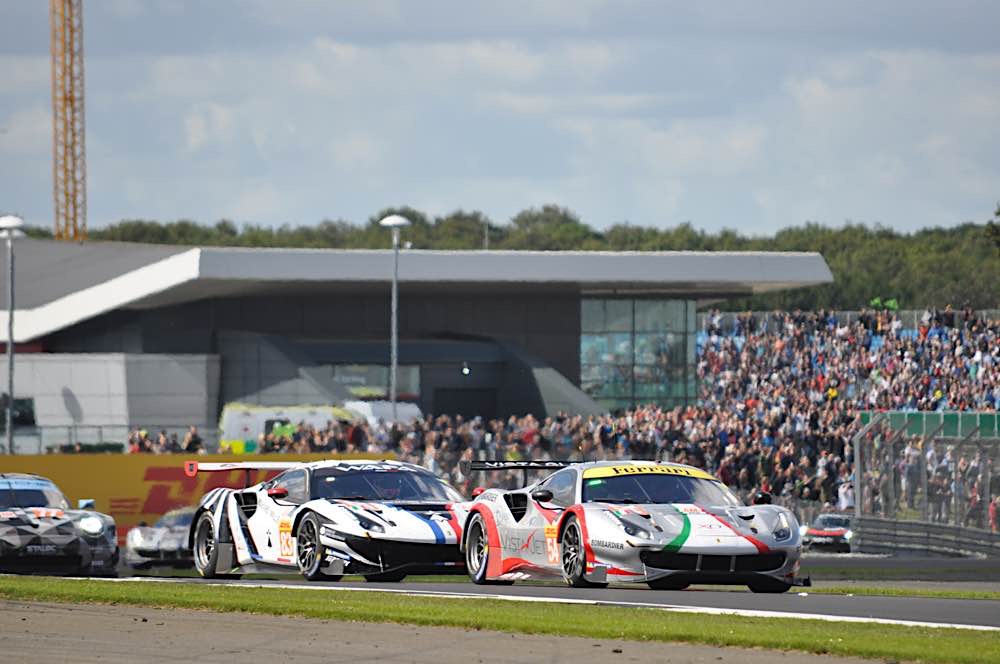 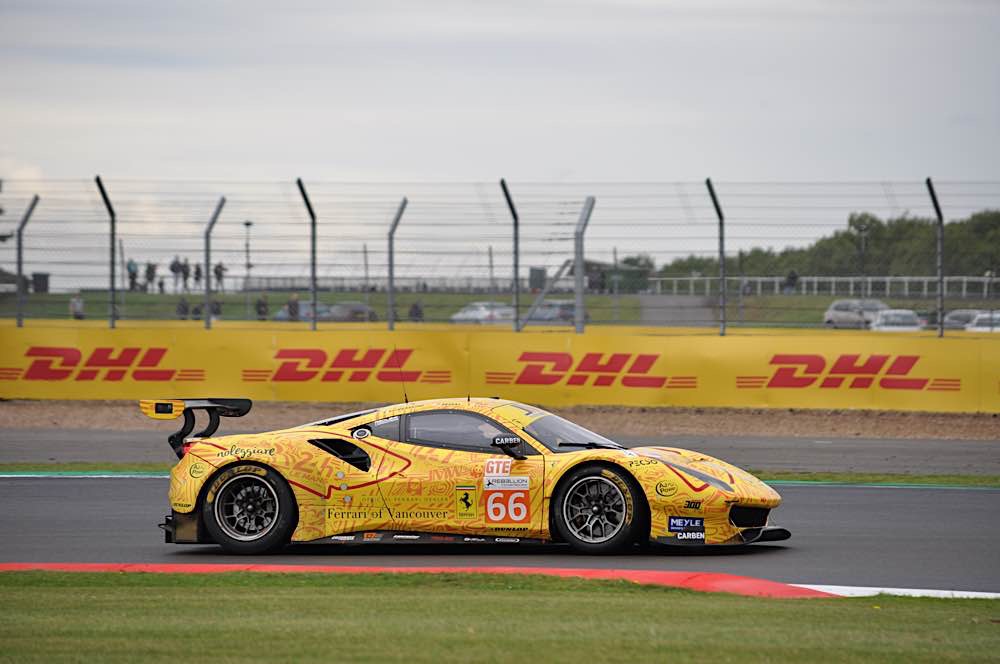 Report and pictures by Keith Bluemel

The weekend of 31 August/01 September saw the Silverstone circuit host a double header for fans of endurance racing, with the ELMS 4 Hours of Silverstone on the Saturday, and Round 1 of the 2019-2020 FIA WEC series featuring another 4 hour race on the Sunday.

The weekend also saw the return of Goodyear to endurance racing, with the announcement that they would provide tyres for three of the top teams in the LMP2 class of the FIA WEC series. To publicise this they had a paddock display featuring a Brabham BT20 F1 car, which used Goodyear tyres in period, and a Brabham BT26 in Goodyear’s blue and yellow livery, with David Brabham in attendance signing autographs.

Below is a round-up of the action in the various GT classes in which numerous Ferrari 488 EVOs competed.

The Silverstone race was the 4thround of the 6 races in the 2019 series, with an entry of 39 cars spread across the three classes. The overall pole position was taken by the LMP2 Dragonspeed entered Oreca 07-Nissan driven by Ben Hanley, whilst in LMP3 the M Racing entered Norma M 30-Nissan took the honours, and in the LMGTE class it was the #60 Kessel Racing Ferrari 488 GTE EVO that was quickest, but only a fraction over a second covered the whole class.

From the start, as the armada of cars barrelled into the first turn there was a distinct lack of space on the ribbon of tarmac as they jostled for position, and a number had to take to the run-off areas to avoid serious contact. The race had started under leaden skies, and after just over five minutes of racing the rain swept in, causing plenty of spins, with most teams opting to pit for wet tyres whilst others decided to try and brave it out on the slicks they had started on, which jumbled up the running order.

By the time the track had dried sufficiently for a return to slick tyres, it was the #60 Kessel Ferrari leading the LMGTE class from the sister #83 example. The #51 Luzich Racing Ferrari, winner of the LMGTE class in the previous round at Monza, had its usual class leading performance hampered by 35kgs of success ballast.

Just after half distance an LMP3 Ligier was pitched heavily into the concrete wall, when it was clipped by an overtaking LMP2 car, which brought out the safety car for a lengthy period whilst the wreckage was cleared.

The final hour of the race saw some great battles through the field, notably between the #83 and #60 Kessel Ferraris and the #51 Luzich example going into the final 20 minutes, when the # 83 car had a quick splash and dash fuel stop, dropping it back into the clutches of the other pair for the final two podium spots, as the #88 Proton entered Porsche had taken command of the class a little bit earlier.

The # 83 managed to get a little clear air over the other pair, who were swapping positions going into the closing laps, but a couple of taps on the rear of the #51 car by the #60 example, allowed it to get past to take the final class podium spot.

Whilst overall the two factory Toyotas dominated qualifying in the LMGTE Pro class it was the #51 AF Corse Ferrari 488 GTE EVO of Calado/Pier Guidi that took the class pole from the #71 sister car of Rigon/Molina The LMGTE Am class pole went to the #90 Aston Martin Vantage AMR in the hands of Eastwood/Yoluc.

Both GT classes saw some frantic action throughout the course of the race, with the pair of AF Corse Ferraris heading the LMGTE Pro class in the early stages, but only narrowly from the pursuing Aston Martins and upgraded 2019 specification Porsches. However, the class pole sitting #51 Ferrari suffered an early puncture which dropped it down the order, which became a fierce fight-back for the remainder of the race. This car’s race was further compromised when it was given a drive-through penalty for an alleged safety car infringement, which the team protested. They thought that their protest had been to no avail and called the car in late in the race to serve it, then just as it was coming through the pits the stewards rescinded their decision, but it was too late and the net result was a 4thplace finish.

The sister #71 car had even worse luck, as it was running a strong 3rdchasing down the Porsches ahead of it, when it was rudely punted off the track and into the barriers by an LMP1 Ginetta driven by Oliver Jarvis – race run! This left the field open for the Porsches to take the class win in the order of #91 driven by Bruni/Lietz, which finished a shade under 4secs ahead of the sister #92 example of Christensen/Estre, with the #97 Aston Martin of Lynn/Martin just over 2secs behind at the chequered flag.

AF Corse had greater fortune in the LMGTE Am class, as their #83 Ferrari driven by Perrodo/Collard/Nielsen eventually came through to take a comfortable win from the # 98 Aston Martin of Dalla Lana/Turner/Gunn. In qualifying the #70 MR Racing entered Ferrari had propped up the time sheets, but came good in the race to take the final podium spot in the hands of Ishikawa/Beretta/Cozzolino.