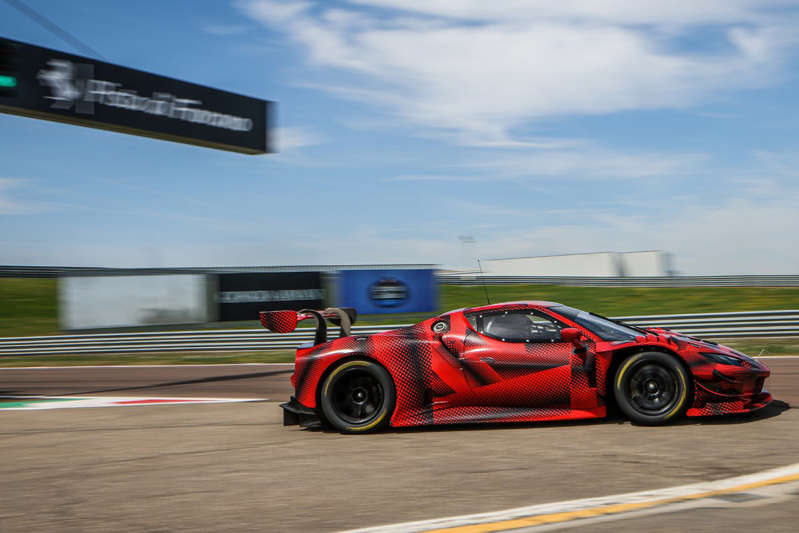 The car is the successor to the hugely successful 488 GT3 and has been built in conjunction with ORECA.

A statement from Ferrari said that “the day’s programme alternated between sessions of laps on the track and stages when the 296 GT3 was checked by the technicians”.

Factory Ferrari drivers Alessandro Pier Guidi and Andrea Bertolini took turns behind the wheel of the car, which ran in a scarlet and black camo livery and features a six-cylinder engine but with no electrical hybrid system, unlike the road-going version.

“Today marks the occasion of GT racing becoming part of our future and it’s a special moment,” said Stefano Coletta, the boss of Ferrari’s Attivita Sportive GT department. “We chose to carry out the first tests in Fiorano because it’s our home and to allow the people who worked on the project to share a very special emotion.

“The car has an intense testing programme ahead of it, but we’ve already had some good feedback from this first session.”

The 296 GT3 will be introduced to competition in the GTE classes next year in a parallel programme to the new Le Mans Hypercar in the World Endurance Championship, which heralds Ferrari’s return to the top class at the Le Mans 24 Hours – a race it has won overall on nine occasions, the last coming in 1965.

The Ferrari Le Mans Hypercar is being developed by AF Corse and is expected to hit the Fiorano test track in June.

Learn more about the 296 GT3 at Ferrari.com