GRAND PRIX: Abu Dhabi: At the Risk of Boring you… 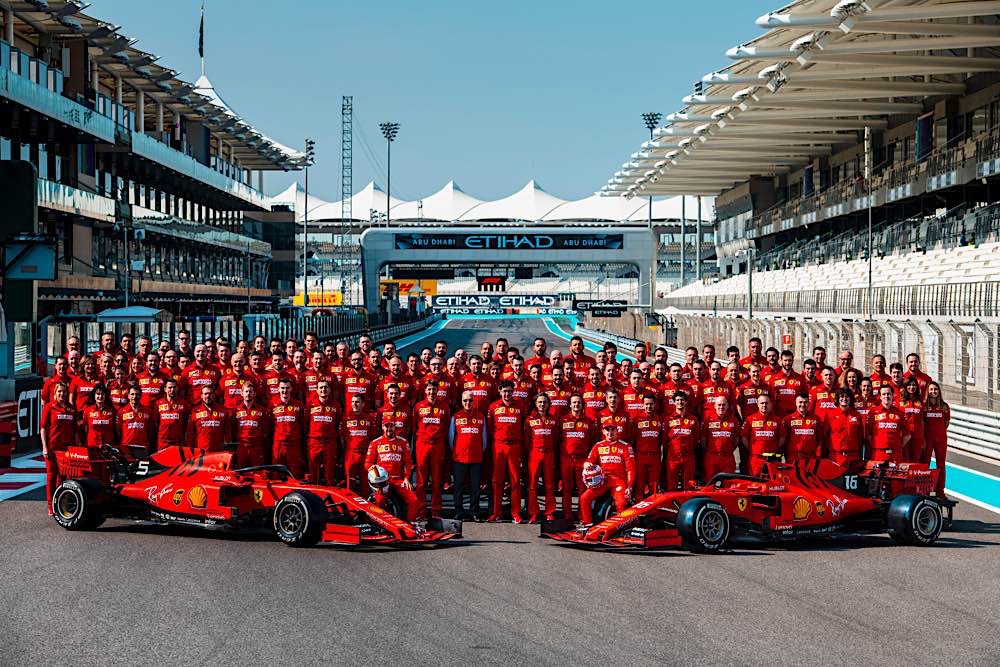 A big thank you to all of the team, from the fans. 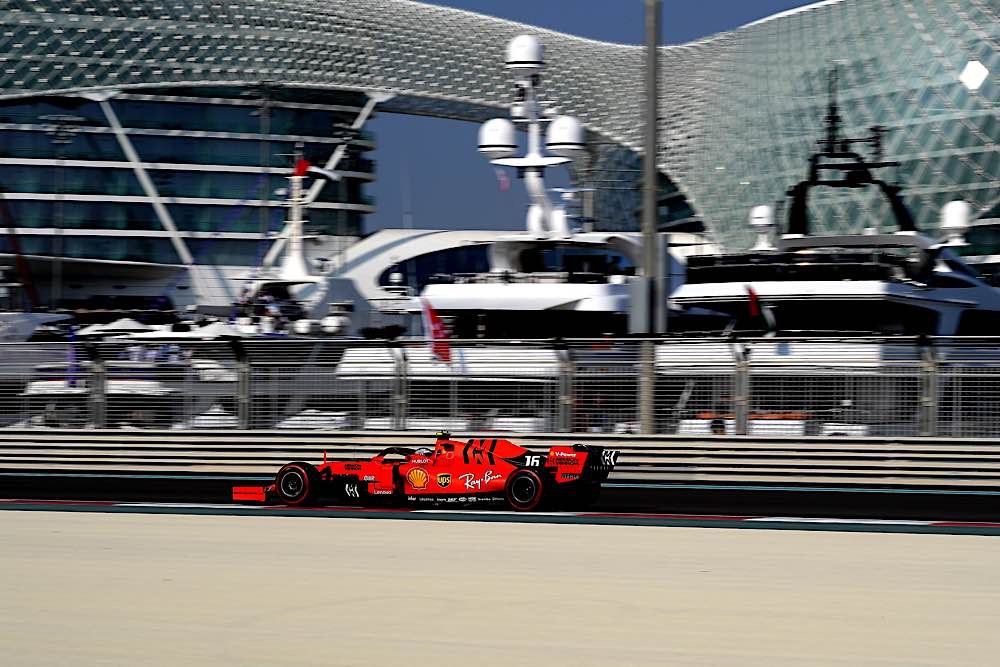 Extravagant yachts and architecture, mainly in white. It has to be Abu Dhabi 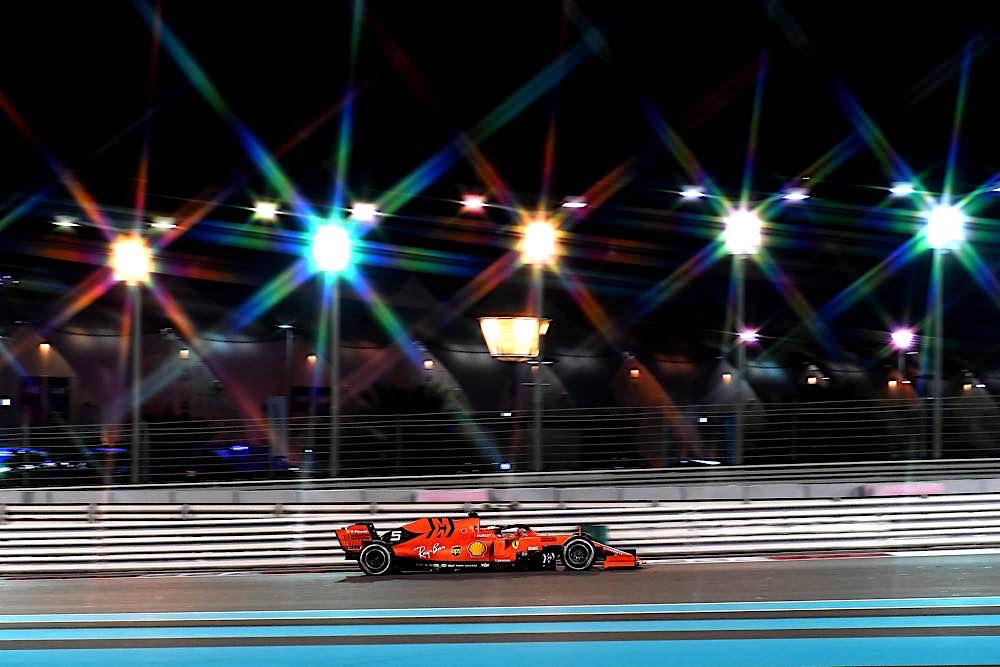 If proof were needed that F1 is becoming too clever for its own good, the Abu Dhabi Grand Prix provided it in more than one way. The “big story” of Abu Dhabi was that Charles Leclerc’s 3rd was in doubt because of an under-declaration of fuel by the team by 4.88kg. That would be just over a gallon to you and me. At first I (and m’ learned friend and fellow scribe Mr Bland) thought “it was less than the allowed 110kg so what’s the problem?”. Now permit me to speculate, based on what I’ve read on t’interweb, using the maths, chemistry and physics of my 1970s secondary school:

Power comes from burning fuel in air, so you can restrict power by limiting either. In a turbo, limiting air is a bit difficult, so the FIA limit the fuel. Not just to the total amount but to the instantaneous amount, as even an F1 car uses more fuel when working hardest, for example when overtaking. They measure this by blasting the fuel in a precision tube in the feed system with a very short high frequency vibration. Measure how long that takes to reach a sensor further down the tube and you know the speed of the fuel, multiply by the volume that’s passed through the tube and you know the flow rate, which needs to be below the maximum at all times. Obviously this vibration, or ultrasound, has to be generated and measured electronically, and this is where in October Red Bull accused Ferrari of cheating by interfering with the signal. Stop the vibration or distort it and you can’t measure it accurately.  The FIA declared that Ferrari were not cheating, Red Bull were mistaken.

However, there’s an “easy” way to check whether the meter is being cheated. Add up all of the little blobs of fuel that you’ve blasted with sound and that’s the total fuel used. Add the total fuel used according to the meter (say 95kg) to the finishing fuel (say 5kg) and you get the opening fuel of 100kg which should agree to the declared fuel. However, if a team is cheating, it has really used 100kg when measuring 95kg,  so for the sums to work a team would have to say it started with 100kg when it really had 105kg. Unfortunately, this equation only works if there are no spills, no evaporation, and no errors of measurement, calculation, etc, which must be very unlikely in as hostile an environment as an F1 car. The FIA “only” fined the team €50,000 – trivial in F1 terms –  and Charles kept his place. Therefore I think this was very much a warning to all teams that they have the technology to check, but this time it was obviously a genuine oversight.

Personally I find all the above fascinating. But then, I enjoyed integral calculus at school. My guess is that it’s of no interest whatsoever to 99% of spectators who are just bemused that they’ve watched a race and don’t know whether the third place man is third or not. F1 has just got too clever.

Practice demonstrated that the Mercedes was, as usual, much softer on its tyres, in this case through the critical 90 degree corners of sector 3. Ferrari were as fast if not faster in the other sectors, but the silver cars had the overall edge because of that sector. Add in a World Champion wanting to prove a point and pole was a foregone conclusion, as indeed was second for Bottas, which became back of the grid due to engine penalties. There was therefore a good chance for Charles and Seb to have a front row place and third, but there was a mix up in the final Q3 run. Trying to time it to perfection, they got stuck behind Albon and Bottas. Charles missed the flag, and Seb’s tyres had cooled too much to post an improvement. This left them 4th and 5th behind Verstappen. An uncomfortable Albon slotted behind them, with regular leader of the B-class, Lando Norris, in 7th ahead of his team mate Sainz in 9th. Ricciardo and Hulkenberg sandwiched the Spaniard to finish the top 10.

Q2 set the tyres for the race, and to try to get an edge, Seb bucked the trend by going for softs while most others – all others in the top 6 – went for mediums.

Disappointingly but unsurprisingly Hamilton drove off to an untroubled victory, if you ignore the usual whiny pit radio. The interest was behind him. Charles pipped Max for second on the opening lap and held it until the pit stops, sadly falling behind Hamilton at around 0.5sec per lap. Seb, whose soft tyres would have been a major advantage, trailed Max. But Seb was scuppered by server failure. “Too clever by half – Volume 2”. The PC controlling DRS went down, and by the time they’d either turned it off and on again or used the back up and wondered whether an Argos Special Offer was an ideal choice, it was lap 17, when Seb’s tyres were long gone. In fact, that happened on lap 12, at the same time that a tactical early change for Charles was called for leading to a stacked stop. Sadly, it worked out badly when a reluctant left front cost Seb 4 seconds.

It was lap 25, 13 laps later, when Verstappen pitted, promoting Charles briefly, but new tyres for Max allowed him past and the one stop strategy went by the board as Charles pitted again on lap 38 to adopt “Plan C” for softs. It was another double stacker which this time went well, but wasn’t enough to give Charles a tyre advantage so the podium ended as Hamilton, Verstappen, Leclerc. During the race, a mapping issue lost some power for Verstappen, though if any actual time was lost it was more likely due to the effort he put into complaining about it over the radio.

In the final stages, Charles had to fend off Bottas who had come through from the back. Just as Seb suffered from no DRS, so Charles slightly benefitted as the Finn was not able to DRS past back markers in the early stages, meaning it was lap 18 of 55 before he reached 4th, passing Seb on his unfortunate first pit-stop. In the course of the race, “end of term” power settings were used where if the engine wore out early nobody cared. But as both Mercedes and the Scuderia did the same, (and probably Red Bull to compensate for the fault) it really made no difference, and Bottas ended 4th. In doing so, a chassis more tyre friendly than the Red Bull had allowed him past a disappointed Albon, and Seb’s 2 stop plan showed what might have been as he demoted a one-stop Albon on lap 53 for 5th.

This year an unbiased observer might have said that much of the real racing was down at 6th and below, and sure enough Perez demonstrated this. He is one of F1’s most annoying drivers since much of the time he makes silly mistakes, but at other times drives superbly and achieves more than could be expected. Starting from 10th (Q 11th) he suffered at the start as Stroll pushed Gasly into him. Stroll subsequently retired and so his dad bought him Aston Martin to cheer him up. A good tyre strategy and good passes on Hulkenberg and, on the last lap, Norris, rewarded the sometimes problematic Sergio for probably his best drive of the year.

The McLaren pair finished as they started, separated by 2 places with Norris 8th and Sainz in 10th, separated by Kyvat. He too had suffered from the DRS issue, which incidentally had led to some very entertaining real overtaking and dicing, but had a well deserved 9th. It’s perhaps indicative of the McLaren resurgence that Norris was disappointed to have not won Class B, blaming it on excessive politeness (sic).

This was never a track where the SF70 was going to shine, and 3rd and 5th are perhaps the best that the team could have hoped for, which is a sad thing to say as the season ends. And whilst we can hope for an improvement in 2020 on a worthy but ultimately disappointing set of results for the Scuderia, spare a thought for the departure lounge. Kubica was a prodigious talent who could easily, in a parallel universe, have been a championship winner, perhaps even in a Red Car. How tragic that the rallying accident stopped his career and that his F1 return was in the worst car on the grid. Hulkenberg is another talent never fully realized. If Nico Rosberg and Jacques Villeneuve could be champions, I suspect he too could have been. However, we welcome back Ocon, a hard and quick racer.

Let’s hope 2020 will be a successful season for Ferrari, and safe for everybody. But wouldn’t it be good if these reports were less about integral calculus, tyre stops, tyre choices and DRS, and more about racing? Come on FIA, you must be able to do something……