GRAND PRIX: Abu Dhabi: The Season Ends, with a whimper… 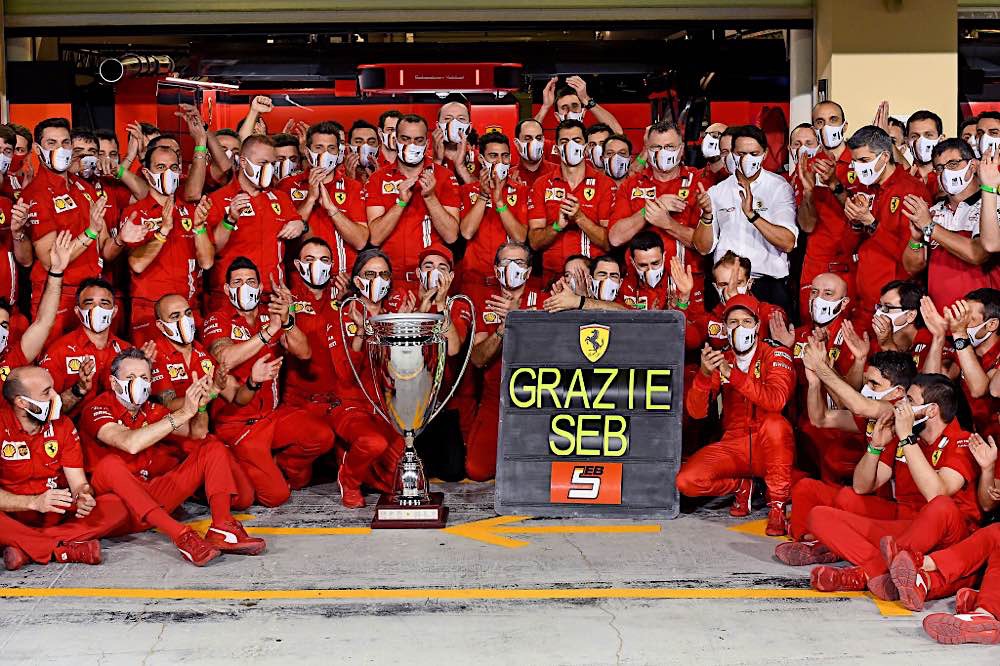 A sad farewell to Seb after 6 seasons. 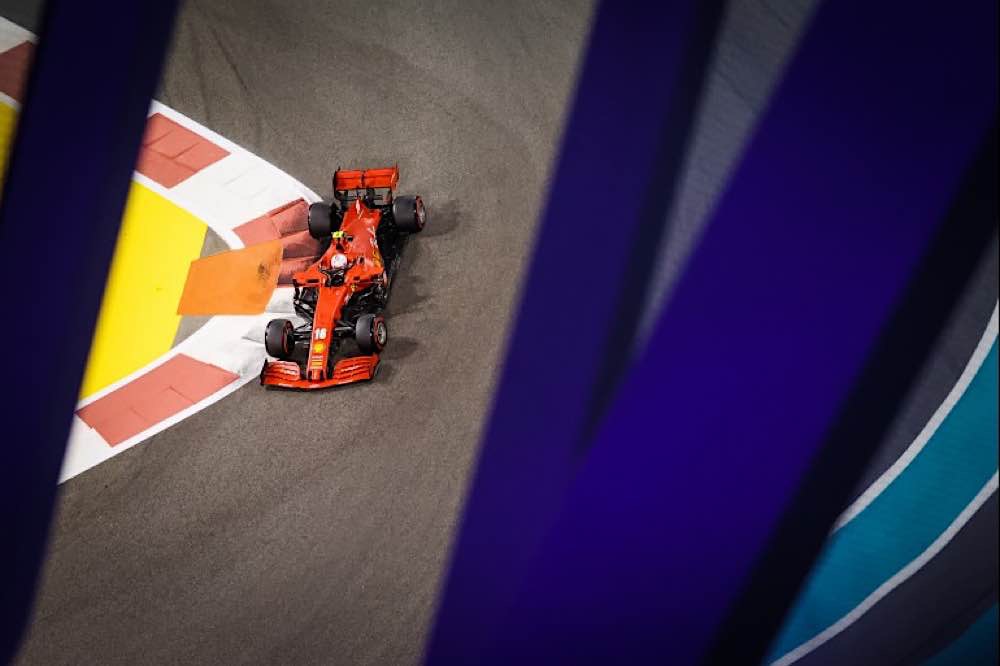 Charles from a strange and dramatic angle.

That’s 96 minutes of my life I’ll never get back. If Sakhir was one of the best races in the last few years, Abu Dhabi was one of the most tedious, which was a shame because there was “so much at stake”. I can hardly remember a year when the seasonal highlight hasn’t been deciding third in the Constructor’s Championship, for which the coveted award is “The Least Mediocre Cup”.

The big news in the week before was on Thursday when Hamilton was declared to have returned “a number of negative COVID-19 tests” so was free to race. The cynics did wonder whether the return was helped by the knowledge that each race done by Russell drops his value by at least £5m a year.

Ferrari’s qualifying followed the recent form with an easy escape from Q1, but only Charles reaching Q3 while Seb languished in 13th.  Strangely, the former did his 1:35.9 on mediums while Seb’s 1:36.6 was on softs. Charles, of course, had a 3 place drop from Sakhir, so started in 12th after qualifying 9th, which was slower on softs than he had done on mediums in Q2. Nobody can say Pirelli don’t give food for thought.

Laurent Mekies,  Sporting Director, said “Today’s qualifying result was pretty much in line with the rest of the season, but it’s worth looking at it more closely as there were some positives to be drawn from it. Yas Marina has never suited our cars, especially the third and slowest sector, although today we are among the quickest on this part of the track, which is interesting looking to the future.” Oh, good.

At the other end of Q3, Verstappen was in charge, but only by 0.03sec from Bottas, in turn 0.05 from Hamilton. What this didn’t reveal was that Mercedes were worried about their engines, in particular the MGU-K reliability. Without making it clear to everybody (or indeed anybody?) the engines were a bit downrated for reliability, which would be seen in the race.

In view of the nail-biting battle for third constructor, Lando Norris’s 4th place with his Macca set the scene, backed up by Carlos just two places away, separated by the under-pressure Albon. The AlphaTauris filled 7th and 10th, the departing Kyvat proving faster than the fancied and retained Gasly. Lance Stroll was 8th, possibly reflecting the de-rated Merc, whilst Perez didn’t run in Q2 to preserve tyres, knowing his engine change would start him from the back.

The first three on the grid finished in that order, and in fact stayed in that order for the whole race, Verstappen finishing 16 seconds ahead. Mercedes could have shaken things up a bit by a strategy to pincer Verstappen, but it’s possible that they decided the engine issue could make that end in tears, so two on the podium would be a decent end to the season for them.

Albon moved ahead of Norris on lap 5, and Norris was challenged for a while by Ricciardo who, on a different tyre strategy ran 5th for a short time then finished 7th. Similarly, Sainz was demoted by the jovial Aussie but recovered to his starting point of 6th. And so with 5th and 6th in the bag, McLaren took 3rd best constructor, which looking back to 2018 must be like a World Championship.

In fairness, I’ve been a bit cynical about 3rd in the Championship, but it does involve substantial prize money. It’s easy to think of McLaren as well funded, but that clearly isn’t the case when a large share of the race team was sold this week to the MSP Sports Capital-led consortium, possibly reflecting the struggles of the road car side.

The other candidate for 3rd was of course Racing Point. Last week’s star Perez was at the back of the grid due to an engine (“IC”, “TC” and “MGU-H”) change, with just Magnussen behind him who had an ES and CE (energy store and controller) change. At the rate of roughly a car a lap, he was up to 14th by lap 8. On the next lap, the Merc engine (MGU-K) blew and that was the end; so much for reduced power for reliability. Cynics suggested that the engine was intended for the obviously still poorly Hamilton so he didn’t have to do the full race and went to RP because Mercedes fouled up again.

“It’s a bit sad leaving the team this way” said Checo “but I told my boys, some of them were crying, you just have to remember what happened last weekend.”

The resultant safety car to recover the Racing Point led to frantic pit stops, and in particular the Ricciardo interval already mentioned, but perhaps the biggest effect could have been a penalty for Sainz for driving slowly in the pitlane. To determine the answer the stewards waited until after the race to look at the telemetry, and then decided all was well. However, if it takes that long to get an answer, it’s clear that the rules and the system are wrong. VAR gets a bad press in football, but at least that is reasonably prompt.

Charles and Seb did not score any points, finishing 13th and 14th respectively. They spent the entire race fighting in the middle of the pack, running different tyre strategies: the Monegasque started on mediums and tried to do something different to those running the same tyres by staying out when most of the field pitted under the safety car. He then pitted on lap 22 to fit the hard. Seb did the opposite, starting on hards and changing to mediums with 20 laps remaining. However, the end result was similar for both drivers, who finished one behind the other.

Ferrari thus finishes sixth in the Constructors’ championship with Charles eighth and Seb 13th in the Drivers’.  It was Seb’s 118th and final race at the wheel of a Scuderia car. Over the course of six seasons, he took 14 wins, to put him third behind Michael Schumacher (72) and Niki Lauda (15) in the list of all-time Ferrari winners. He also took 12 pole positions, 14 fastest race laps and scored a total of 1400 points. Arrivederci vecchio amico.

Re-reading last week’s report, unlike this report  there’s very little about finance, tyre choice and rules. It was about racing. That says a lot. This season has been far better than it had any right to be, starting in July and ending in December. The circus has visited some real tracks that have given interesting races, albeit the best race was on a circuit that ticked none of the desirable feature boxes. The tracks used give food for thought: everybody liked Mugello, and nobody missed Singapore, or even Monaco.  There was some hope for Ferrari at some stages in the season, but it was rudely dashed, and this will remain a season to forget for tifosi everywhere.

It’s unfortunate that the Abu Dhabi race finished the season. With no racing, little atmosphere, Ferrari not scoring and the only excitement out on lap 9, I surely can’t be the only one (yes you are – ed) who thought of TS Eliot’s lines from “The Hollow Men”: “This is the way the world ends; not with a bang but a whimper.”

Merry Christmas and Happy New Year from myself, Nigel and Winston, your 2020 F1 reporting team.