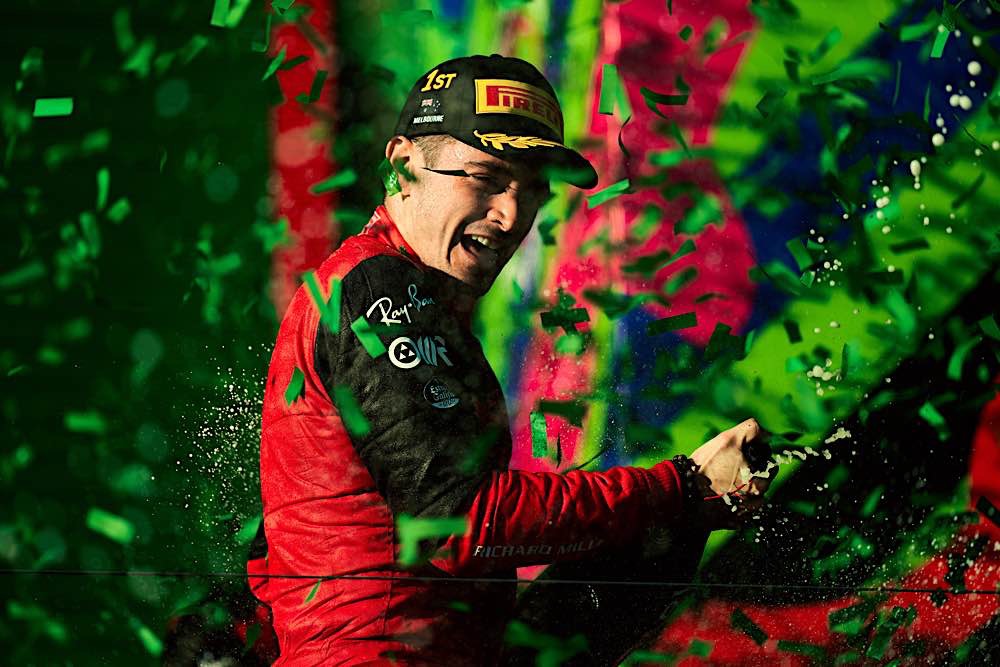 Joy for Charles on the podium. 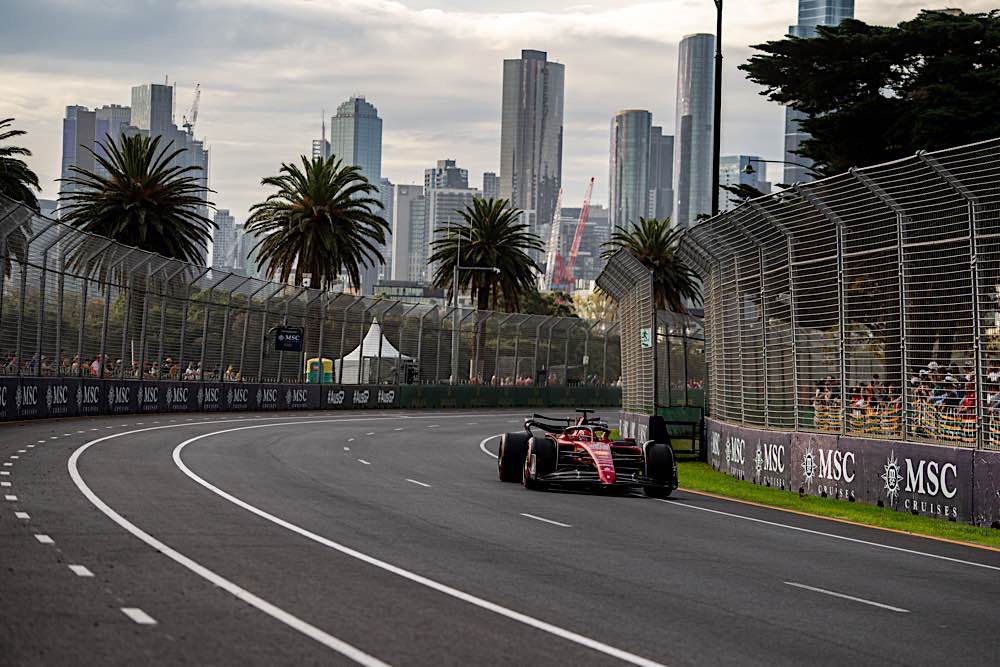 Melbourne is a "road" circuit with few of the downsides. 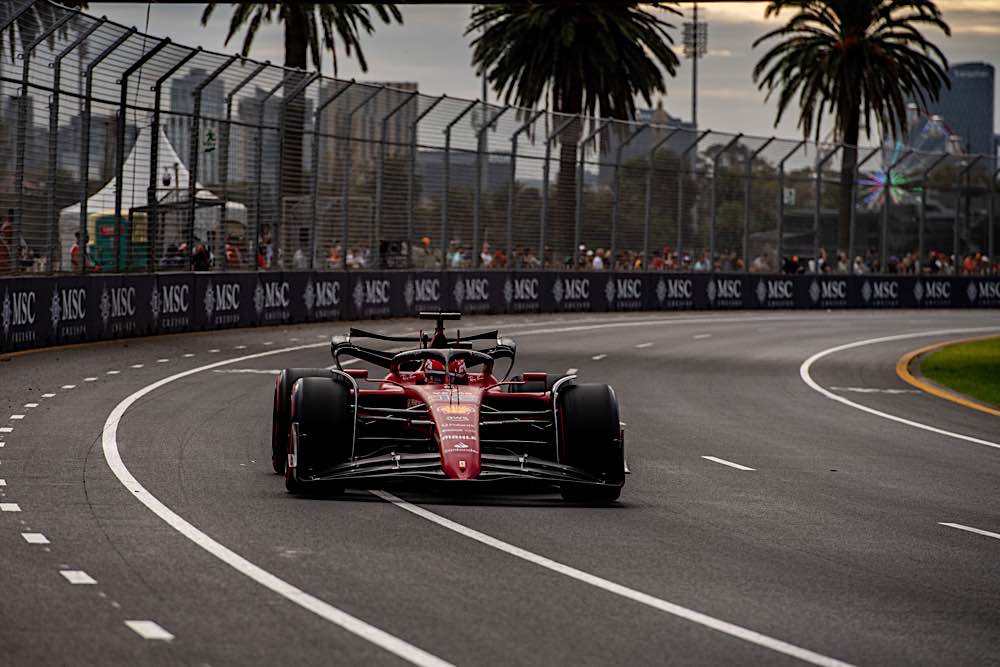 Can you remember when Adrian Newey first went to Red Bull and they had a major reliability issue? It was as if he was “doing a Chapman” and designing everything to the limit, and often past it, to try to get the advantage. At first it all broke, then gradually as the innovation stayed but the breakages stopped they became dominant. It seems to me that exactly this approach has been taken by some of the leading teams following the reg changes. Red Bull who are “no longer Honda powered” (it says here) are suffering with engine issues.  In Melbourne practice, the Ferraris suffered quite bad porpoising, though not as bad as Mercedes had previously had. One must assume that the risks are all carefully balanced against the benefits and the designers hope things stay the right side of failure.

Take for instance porpoising. I think we all know that the problem is that as the car goes faster, the downforce increases but then the tunnels stall and the downforce is suddenly lost, so the car springs up and the process restarts, often at up to 3 cycles per second. To keep away from the dangers of porpoising would be to throw away the chance of more grip. So while maximizing downforce is paramount, it’s interesting to think of the challenges. The tunnels are “wings”, but as they are of a shape never seen on aircraft, there’s far less data to examine than with higher aspect ratios. Issues are not only the downforce, but also the way that the point it acts through (“centre of pressure”)  moves about. If it moves backward, there can be stability but forward means instability. Then as the angle of the car changes, what is the impact on the front and rear wings, and all the other aero bits? How do the springs and dampers react as the downforce lets go? The tyres form part of the suspension – what effect do they have on porpoising? Then there is the variable of the circuits. Anything other than super-smooth is sure to upset the aero as the seal to the tunnels changes. These thoughts are just naïve non-engineer thoughts. Goodness knows how many are the real considerations, and this is just one aspect.

I am truly lost in admiration for the designers who manage to get so close to perfection within all these parameters. It’s clear that the cars at the front have taken an adventurous route in the hope of gaining the mythical “unfair advantage”, but when did conservative ever win World Championships? (1966 and 1967 – Ed).  Fortunately, Ferrari seem at present to have got everything better than the rest, and in Melbourne it showed.

Red flags in qualifying seem to be on the way to becoming normal. Melbourne had two, and one of them cost Ferrari dearly.

All began well with both Ferraris securely in the top six when, 2 minutes from the end of Q1 Latifi was passed by Stroll on a slowing down lap. Stroll considerately moved over for an Alfa, whereupon Latifi then decided to pass him at high speed and converted his FW44 into a sled, also converting part of Williams’ capped development budget into a repair budget.

Q2 went well with the Ferraris mixed in with the Red Bulls at the front. When Q3 started, Charles followed the ideal strategy of two warm up laps and a hot one for the softs, resulting in a 1:18.24 which he later dropped to 1:17.87, the only sub-18 and pole. Carlos looked to be on for copying him, when, unusually, Alonso parked in the barriers, blaming loss of hydraulics and registering 10th. The red flag went out seconds before Carlos crossed the line, meaning he had to re-run. However, there were unspecified problems restarting the car – we call it flooding where I come from – and he only got one warm up lap so qualified 9th.

Verstappen and Perez put up times good enough to beat Charles’ first run, but his second demoted them to 2nd and 3rd, while Norris outqualified his team mate as seems to be his habit, this time by three places for 4th. The Mercs took 5th and 6th, George only 1/10 behind Lewis. Ocon’s Alpine was 8th. Sadly, it’s beginning to look like the old order is back, pushing out those Alfas and Haas we saw doing well at the first races, as the rough edges are knocked off adventurous design.

Charles had a decent start, while behind him Perez challenged Verstappen, and was pushed back as a result of which Hamilton took third. So basically a rerun of the start at Saudi, just with different characters. One might expect GP drivers to realise that fighting one’s team mate is not ideal if it benefits other drivers. There was a bit of shuffling behind the top 4, but the worst loser by far was Carlos. In 9th with apparently little to lose, they gambled on hard tyres. Things had already gone wrong on the way to the grid as some steering wheel switches malfunctioned requiring a swap, and then anti-stall kicked in at the start.  Oh, for simpler days. It would be wrong to make assumptions about trying too hard too soon, but Carlos commented “I pushed too early when the tyres were probably not ready”. He went off into the gravel at turn 9 on lap two after passing Schumacher, bringing out the safety car.

Restarts are always a nervous time, but Charles managed it well, and created a gap between him and Verstappen. By lap 10, Perez passed Hamilton to reclaim 3rd, showing perhaps that the Mercedes is currently weakest of the Big 3.  Charles managed to keep the tyres going for 4 laps longer than Verstappen, not needing to change until lap 21. “This was a track that we expected to be tough for us [but] we didn’t suffer from tyre degradation, even when pushing hard. The car was just amazing and I’m very pleased with how my race went.”

Safety car time arrived again when (lap 24) Vettel crashed. Mercedes quickly changed Russell, who was promoted to 3rd as the others pitted, Perez dropping behind Alonso to 5th. Charles’ restart was again exemplary and he didn’t look to be under pressure. Unlike Russell who defended valiantly against Perez until told to conserve his tyres; Red Bull became 2 and 3, but with a 5 second gap by lap 38 to Charles in the lead. As Verstappen started lap 39, everything stopped. Max reported a “weird fluid smell”  to his engineer while the fire marshall took a characteristically relaxed Australian no-worries approach, until directed  by the Dutchman to point it at the cooking definitely-not-Honda-honestly power unit.

With only one of each Ferrari and Red Bull left, the space behind was quite symmetrical with two Mercs (Russell leading Hamilton)  and two Maccas, unsurprisingly Norris leading Ricciardo. Charles built his lead to 20 seconds by the flag, and with reliability worries hanging over Perez he seemed to be driving for the second place points. To emphasise the premium the sport puts on first place, Charles,  the single Ferrari finisher, scored only one point less than Hamilton and Russell combined, albeit assisted by fastest lap. Ocon, Botttas and Gasly took 7th to 9th, while Albon, having run the whole race on one set of tyres, pitted on the last lap to satisfy the regs and dropped a place to 10th.

With the next race being “home turf”, we hope for consistency of results from Charles – he cannot improve on pole, a win and fastest lap –  and better luck for Carlos.

Last words go to Mattia Binotto: “Charles delivered a mature performance, something he is now making a habit of. It’s a shame for Carlos, because his weekend was complicated by a series of circumstances in both qualifying and the race, which affected his performance. I know him well enough to believe that he will turn the negatives to his advantage and come back stronger next time he’s in the car. The next race, being at Imola, takes on even greater importance. We can’t wait to be there and we’re looking forward to seeing the circuit packed with our fans, to share this good start to the year.”