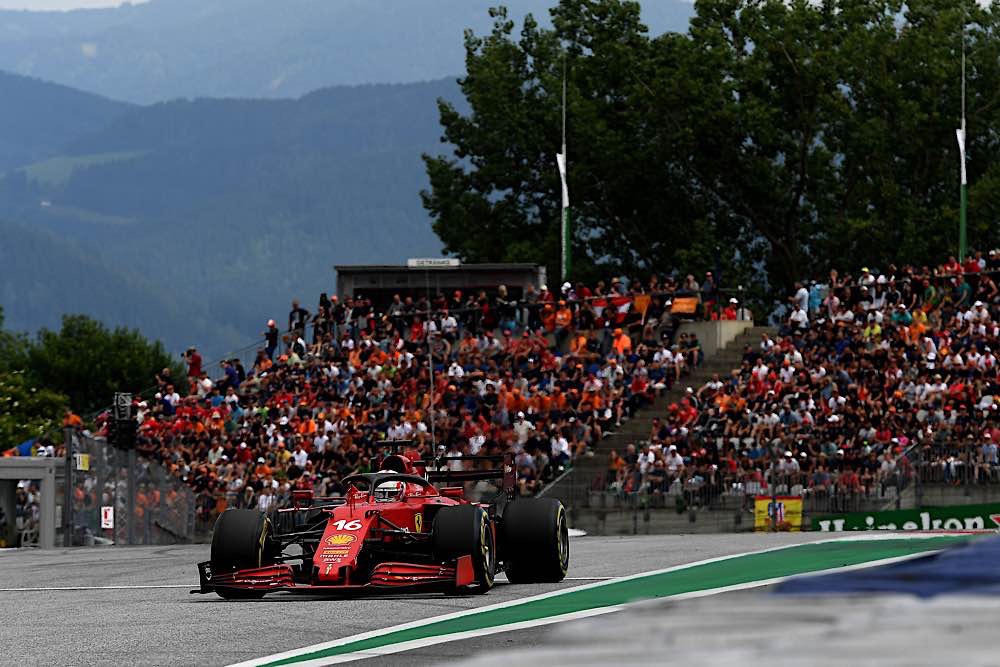 Getting back to normal with a decent size of crowd. 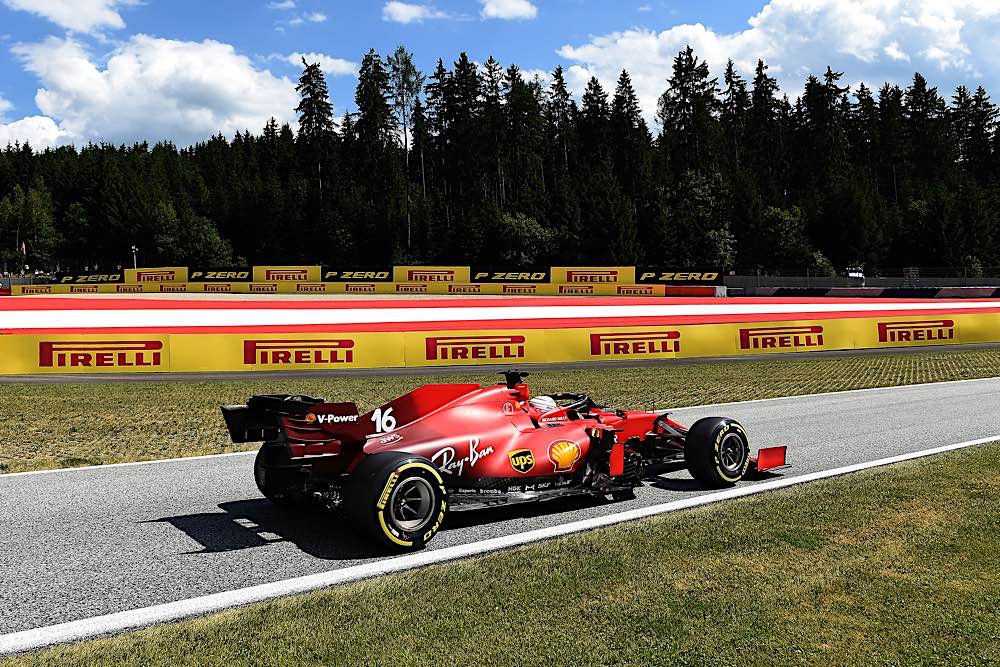 Even coniferous trees look good with a Ferrari in the foreground. 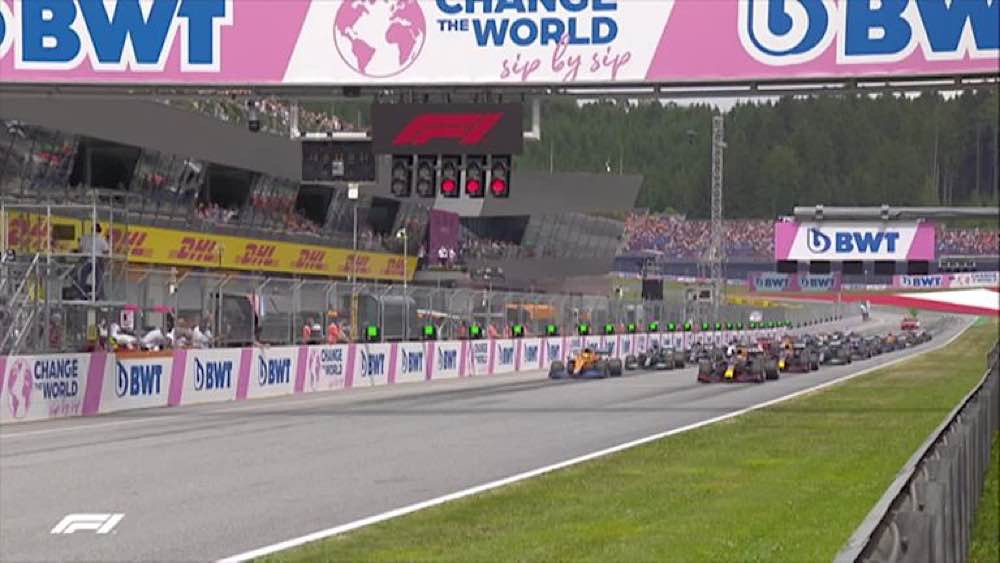 Popular pink sponsor BWT were behind the race. 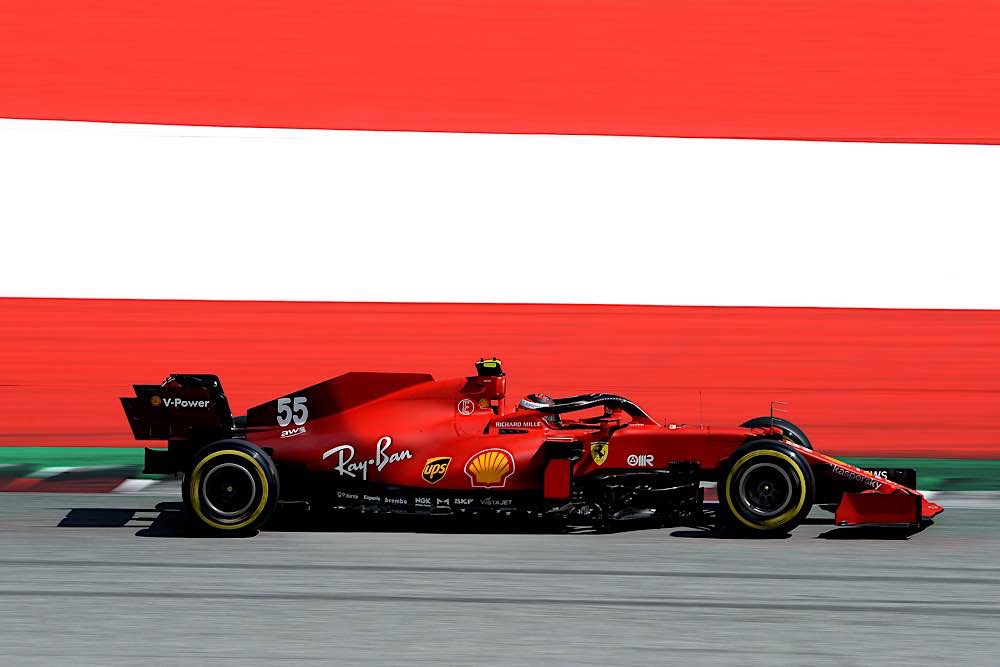 Carlos and a huge Austrian flag. 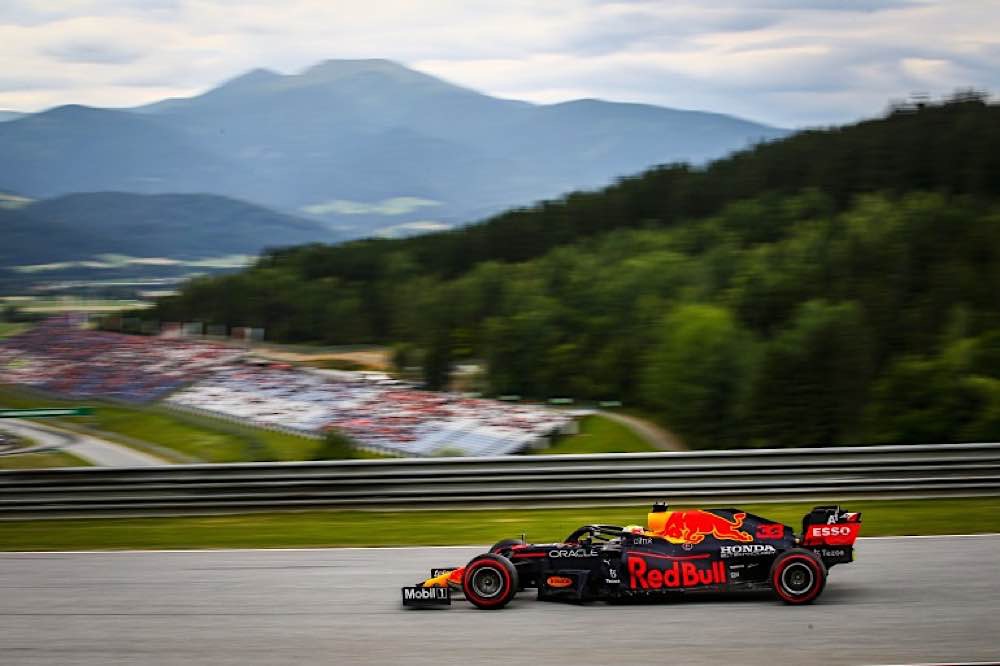 Mountains. Good, even with a RedBull in view.

The consequences of an action can be interesting. Sometimes, they’re logical, predictable and obvious – I became interested in motor racing, so I am poor. But sometimes they are convoluted – if I hadn’t been to my cousin’s 21st birthday party in 1978, I wouldn’t be writing this report. The second example is often regarded as chaos theory, and in either type, consequences can be immediate or long term

The incident when Norris tried to pass Perez in Austria had immediate, logical but unexpected results, and possibly more wide ranging effects.  Norris held his line, with the result that Perez had no option but to go into the gravel, resulting in a drop to 10th. Enthusiasts, would call it “good strong racing” and whilst it might result in a brief  “that was a bit sharp, mate!” in parc ferme if it happened in club racing, it was judged unacceptable at the pinnacle. The stewards, former Stock Car Champion Derek Warwick and some long-standing stewards with no known direct single seater driving  experience, thought that Norris should have moved out of Perez’s path, so penalised him with 5 seconds.

Regular reader (I am told we have one, in County Durham) knows that I enjoy checking the regs, and the nearest of relevance that I could see was a prohibition of “deliberate crowding of a car beyond the edge of the track or any other abnormal change of direction” or possibly requiring a car’s width be left if a blocking manoeuvre moves off the racing line.  I’ve watched the incident a few times, and find it hard to fit the penalty into these rules.  To say the stewards were slated for their decision is to understate the reaction.

What’s this to do with Ferrari, you may ask?  Perez dropped to 10th and fought back to reclaim his place near the front, but was held up by Ricciardo, racing better than he qualified. Charles therefore caught Perez, but went off track during the same overtaking manoeuvre, but by him on Perez, at the same turn 4. And again at turn 6.  In the view of this writer, Perez made a couple of twitches which were a bit dubious, though in many races similar moves have been dismissed as a “racing incident”. But the stewards had backed themselves into a corner and so logically a couple of 5 second penalties had to be issued. This later promoted Carlos to 5th on track, which is good, but brought the competence of stewards in general further into question by many commentators. An opportunistic move by Lando may have big implications, though as it’s the FIA I won’t hold my breath.

For Ferrari, this began in France. There, it became clear that the SF21 does not like soft tyres, and the choice this week was generally slightly softer than even last week. There are, until the next race, no points for qualifying, so the decision was taken to be able to start the race on hards or mediums, which meant the chances of getting into Q3 were reduced. Sure enough, Carlos and Charles lined up 11th and 12th, in front of Ricciardo in 13th, which must have galled the Aussie as his team-mate was 2nd. How does he keep smiling?

Verstappen took pole, to the joy of many Dutch who filled one of the stands, with Norris second by less than 0.05s. Perez kept up the loyal wingman role in 3rd, with Mercedes slipping to 4th and 5th, ahead of both AlphaTauri. Vettel and Stroll crowbarred the Astons into the top 10, sandwiching George Russell who staggeringly got the Williams into 9th. Whilst Lando deserved plaudits, perhaps Russell had the greater achievement.

Whilst the start was clean at the front, Ocon got caught at turn 4 in a mediocrity sandwich between Schumacher’s Haas and Giovinazzi’s Alfa, resulting in a safety car. This had helped squeeze the cars up a bit, which is what resulted in the infamous Norris/Perez incident. Perez’s exit promoted Hamilton to 3rd, and whilst it was a hard fight he overtook Norris on lap 20 with the radio comment “such a great driver”. It would be a massive cynic who thought the reason for this was calculated to take the spotlight away from his potential nemesis, Russell. So let’s just say what a nice gesture.

Norris’s 5 second penalty, taken at his tyre stop, put him behind Bottas, but meanwhile Hamilton had, unusually for him, picked up some slowing floor damage. He was as surprised as most spectators, so once again do we see weaknesses in Mercedes F1 engineering? His team asked him to swap with Bottas and he was powerless to hold off Norris, so it finished Verstappen, Bottas, Norris, which isn’t an order we might have guessed at the beginning of the year.

The consequences of that Perez move then came to the fore. Charles and Perez, as we have discussed, clashed twice with Charles dropping back a little as a result. Perez eventually passed Ricciardo, and eked out enough of a gap to keep his position. However, Ferrari outsmarted him with team tactics. Carlos had begun on the unpopular hards, and they had lasted 48 laps. He was now on relatively fresh tyres, so swapped position with Charles. He wasn’t able to get close to Perez, but 9.2 seconds was close enough to gain 5th with the penalties. Ricciardo was a commendable 7th, leaving a disappointed Charles 8th.  Mattio Binotto said “This result is in line with our potential at this track. Fifth place was on the cards and the most we could aspire to. Carlos secured it with a great drive, while Charles definitely deserved better.I think the decisions we made yesterday were shown to be the right ones, given how the race went. What I would highlight today is the spirit shown by our drivers, as Charles did not hesitate to make way for Carlos, who was on fresher and faster tyres. That meant we were able to get the best possible result for the team. It’s the right spirit and it’s the way to go as we continue to make progress.” Interesting, and satisfying, how often team spirit and a sporting approach come into the Ferrari quotes.

Inevitably, Gasly came into the top 10 whilst heartbreakingly for the struggling once-mighty Williams, Alonso passed Russell for the last point, 4 laps from the end.

But that didn’t finish the controversies. The “F1 incompetent club racer’s impersonation team” came into action. Raikonnen turned into Vettel as Seb passed him on the last lap, the video looking as though Raikonnen  was a stranger to the mirrors and Vettel a mite careless. It got worse as 8 cars were accused of not respecting the double waved yellows. My guess is that they were so puzzled by the accident that they didn’t see them. Only 2 were penalised, but it didn’t affect the points, so perhaps the stewards do have some sense.

George Russell must wonder what he has to do for a point.

With RedBull doing so well with Honda engines, wouldn’t you like to be a fly on the wall in the Tokyo boardroom, as, for twice in a dozen years, the marketing department explain how to snatch defeat from the jaws of victory?

It hurts me to say it, but Ferrari seem to be confined to carpet bagging points from intelligent strategy and good driving. But there is hope; if McLaren can recover from the dire position they were in a few years ago, surely the Scuderia must soon be able to rise again?

Will the new qualifying/sprint race format help the sport?

If you’re off to Silverstone to bravely volunteer for the Covid transmission test programme, enjoy yourself.