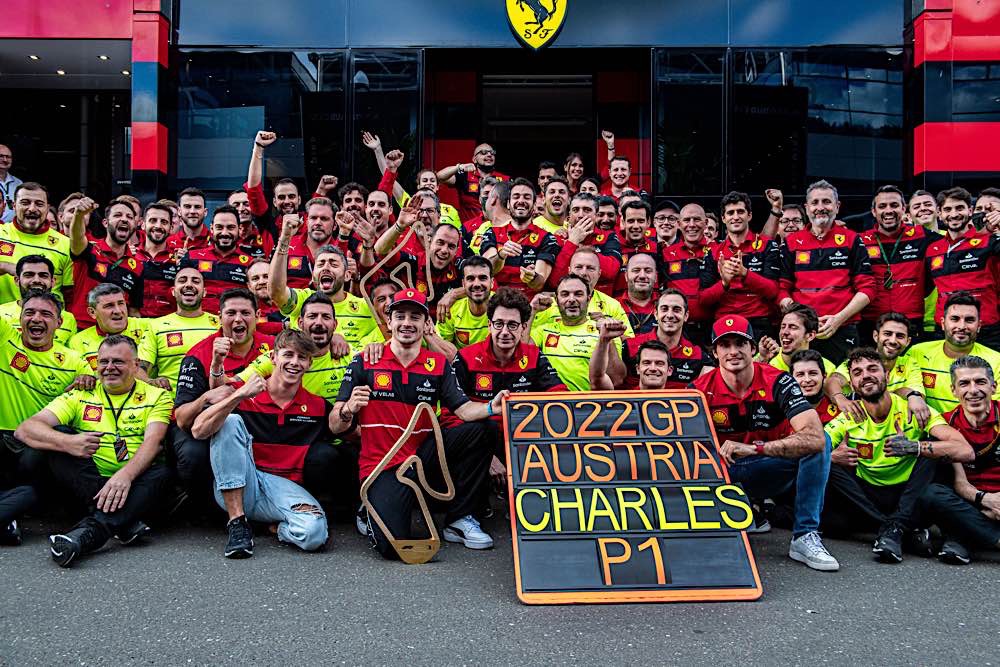 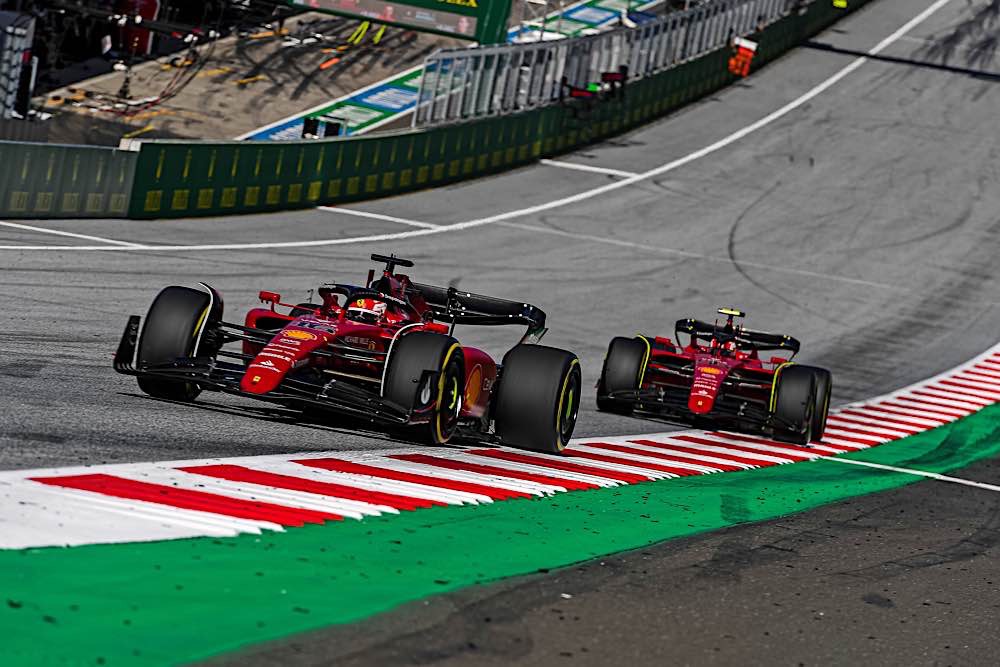 The cars spent the weekend running together, up to a point. 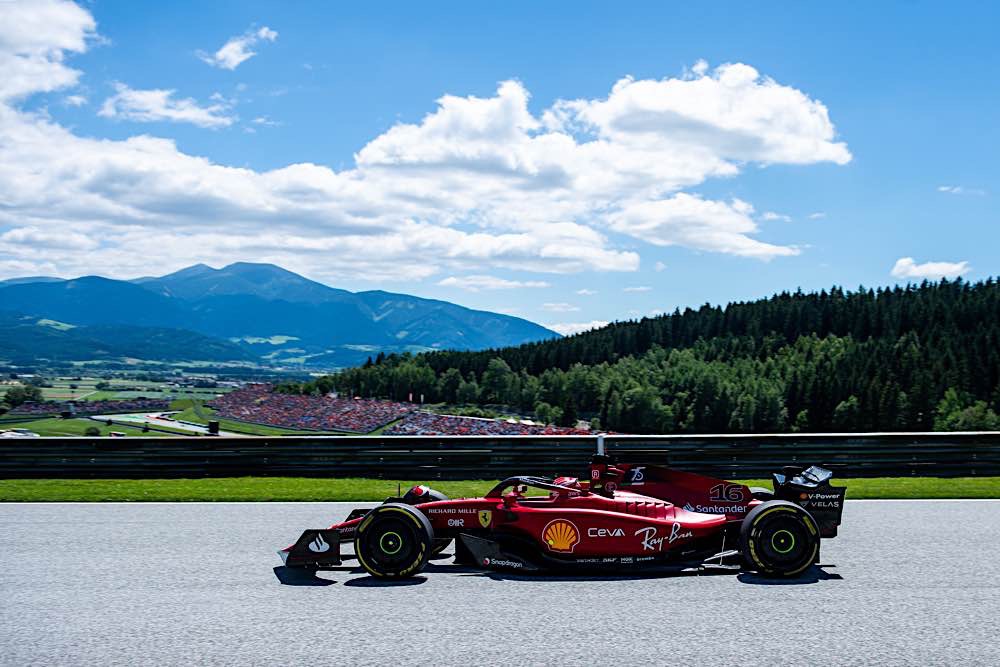 One of the non-racing items discussed after the Austria race was fan behaviour. When Hamilton went off in Q3, there was what was described as cheering, though jeering is a more accurate description, from the Verstappen fans. This caused some complaints, in particular from Hamilton himself, as being unsporting and unattractive and whilst I couldn’t argue with that, the accident was not an obvious life-threatening one. We’ve had fans jeering in the past when ill fortune befalls their opponents, and in my view the behaviour of fans merely reflects the object of their admiration.

To expand my point, look at the “orange army” in more detail. They are generally dressed alike, they are loud but in an organized way, and by discharging smoke bombs they make the sport look dramatic but severely unattractive and slightly thuggish. So, nothing personal Max Fans, but you follow your hero in being unimaginative, a bit dirty, and brutish. In the past Schumacher fans were somewhat self assured and confident, and taking this a step further Senna fans merely had a serene confidence that comes from knowing their man was simply the best, though that might be my own prejudice coming out.

There is also a “magnifying effect” from the way society now behaves. As anybody who listened to Rory Stewart’s excellent Radio4 series on argument (and who, amongst F1 fans wouldn’t?) we are conditioned by media, social and otherwise, to have polarized opinions without any acceptance of nuance. To give an example, those Dutch fans really believe that Verstappen won the Champiosnhip last year. This clearly leads to less pleasant behaviours.

Being Ferrari fans, of course, we’re above such squalid matters. Like our drivers we have sporting, intelligent passion We take all the ups and downs pragmatically (really? -ed) celebrating with infectious joy and weeping with anguish as the moment dictates.  And in Austria, it clearly dictated both joy and anguish.

Qualifying was characterized by a sudden desire of the officials to enforce track limits. Anything that keeps them happy and stops them making up new rules as they go along must help, I suppose.

Q1 and Q2 were uneventful for the Scuderia, but elsewhere the happy but hapless Ricciardo was eliminated together with both Aston Martins. Q2 confirmed that Ricciado wasn’t wholly to blame when his team-mate was eliminated. A lock up and a track limit penalty put the pressure on Perez, who responded with a “measured” 6th. Sadly for him it also entailed a track limit violation which was spotted after the session, resulting in  4th becoming 13th.

Verstappen initially took the lead  in Q3 with Charles and Carlos behind, but as they were gearing up for final runs 5 minutes from the end, Hamilton went off unhurt, bringing a red flag and childish jeers. After the car was recovered, there was another red flag as Russell also went off without injury, leaving only 2 minutes. Charles and Carlos calmly went 1-2, and it looked as though it was a front row lockout, especially as Verstappen’s run looked a bit nondescript until the final sector when he lit up and took pole.

Russell had done enough for 5th before his crash. Ocon was 6th, and the increasingly less surprising Haas twins were 7th and 8th, with Alonso taking 9th, Hamilton with only an out lap to his credit in 10th.

There was drama as Alonso’s car died on the grid, and then Zhou stalled leading to an extra formation lap. Charles tried to pass Verstappen at the start, but the Dutchman closed the door, which let Carlos slip by into second. Charles retook the position at turn 5. On lap 5,  Charles and Carlos swapped places again, but the Monegasque ended the lap in second place, ahead of his team-mate, which was the order at the flag. Russell started 4th and finished 4th while Perez climbed to 8th by the end of lap1, 5th at the end. He was helped by a Gasly/Hamilton collision on lap 1 which delayed both. Hamilton recovered enough to be hassling Schumacher for 8th which he finally achieved after Mick lost the DRS from Magnussen in 7th. Ocon was 6th.

To say the emotions ebbed and flowed (intelligently and passionately) would be somewhat of an understatement.

Verstappen kept the lead, but in the melee off the start line, Russell passed Carlos, only for him to retake the place at turn 3. This clearly put Russell on the back foot, and when challenged by Perez at turn 4 they collided. Perez rejoined last, and would retire on lap 25,  Russell had a 5 second penalty, and a pit stop for a new wing.

After the sprint, Ferrari management spoke about the data gained during the race and the better experience of Medium tyres. Whilst the cynics may have dismissed such comments, there seemed to be some truth in them by lap 13, when Charles took Verstappen down the inside at turn 4, the Dutchman looking  quite defenceless. He pitted for new tyres, leaving Carlos second.

On laps 27 and 28, the Ferraris pitted for hards, emerging in second and 4th behind Verstappen and Hamilton,  who had struggled a bit to pass Schumacher. With newer tyres, Charles was past Verstappen within 5 laps, and the RedBull almost had the air of “go ahead mate, I can’t compete with that”.

Differing strategies had got the Ferraris and RedBulls out of phase, so as Charles and Carlos pitted on laps 49 and 50, Verstappen’s tyres were already 13 laps older. When Charles reached him on lap 53, he went to the outside of Verstappen into Turn 3, forcing the RB driver to take a tight line. And lacking traction, Verstappen was easily passed by the Ferrari driver as they exited the corner. By lap 57 Carlos was ready to pass Verstappen, but while trying to outdrag him the engine let go in a big way, flames appearing. Or as an ’80s Alfa man would have said “the bodywork caught fire due to an errant Dutch flare, and this damaged the engine electronics”. Poor Carlos was distraught (another “No.. Noo…….Noooo!!”) and conflicted as he needed to bale out but if he did, with no engine brake the car would have rolled back to the track. A marshall eventually appeared with a chock, and then the fire could be attacked. Brave marshalling, but poor organisation. Fortunately there was no injury, but another major repair for the team bodes ill.

The resultant virtual safety car meant new mediums.  Ten laps from the flag, Charles reported an issue with his throttle pedal not returning to 0%, and Verstappen was told to apply pressure. With five laps remaining the Red Bull driver was just 2.7s behind the Ferrari but, as we all held our breath, the Monegasque was able to hang on to take victory just 1.5s ahead of Verstappen. Hamilton finished third ahead of team-mate Russell, which in view of the issues both faced was a commendable achievement, while Ocon took fifth place ahead of Schumacher. It’s reaching the stage that the White Ferraris will soon excite no sarcasm from your reporters, a sad day to contemplate. McLaren’s Lando Norris finished seventh ahead of Magnussen and the second McLaren of Daniel Ricciardo, and the final point on offer went to Fernando Alonso. The Alpine driver was investigated after the race, accused of releasing with a loose left front, but it was determined that all appeared normal at the release.

The gap to Verstappen is narrowed, and the gap to RedBull is narrowed as well, ironically thanks to Mercedes putting Perez out. However, it could have been so much more. As Carlos said: “Today’s result is a hard one to take as it cost the team and myself an important number of points for both championships.” If only we could see both drivers happy.

Let Mattio Binotto have the final word, which seems to rightly mix joy with anguish, intelligence and passion: “There are a lot of positives we can take home from today’s race. We have secured our second consecutive Grand Prix win, which confirms that we are doing a good job with a car that is proving to be competitive at every track. We were able to put Verstappen under pressure, forcing him into a defensive race. The mechanics carried out five very quick pit stops and the drivers executed everything we asked of them prior to the race and managed the tyres very well.

“Charles drove like a lion, overtaking Max on track no fewer than three times and Carlos looked like doing the same which would have resulted in a well-deserved one-two finish. Of course we are very disappointed for him, but I’m sure he will fight back in the upcoming races. We are still suffering with reliability problems, we know what they are and we must make every effort to solve them as soon as possible. I am sure we can do it, but after a performance like today’s, I want to congratulate the whole team, here at the track and back in Maranello, where all the departments did such a great job over the winter.”