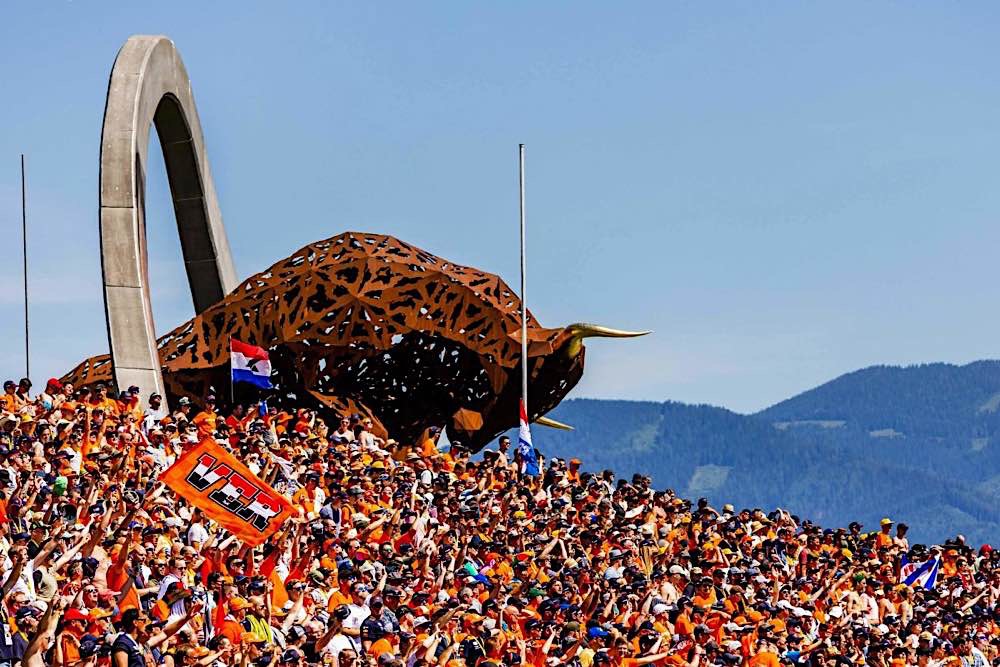 Circuit is a shrine to Red Bull 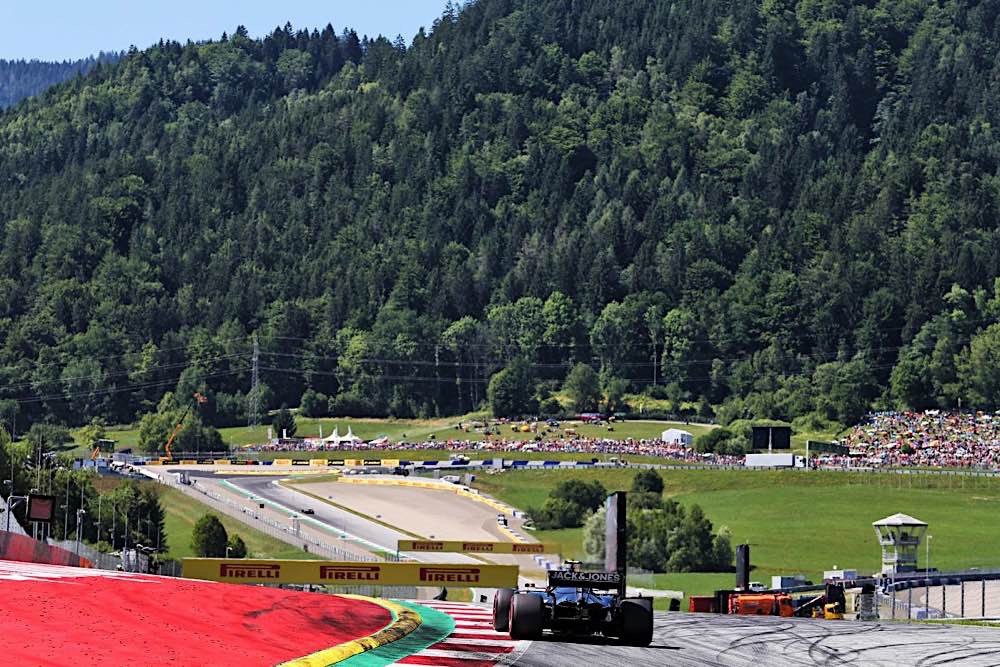 The Styrian Mountains form a backdrop that is hard to beat 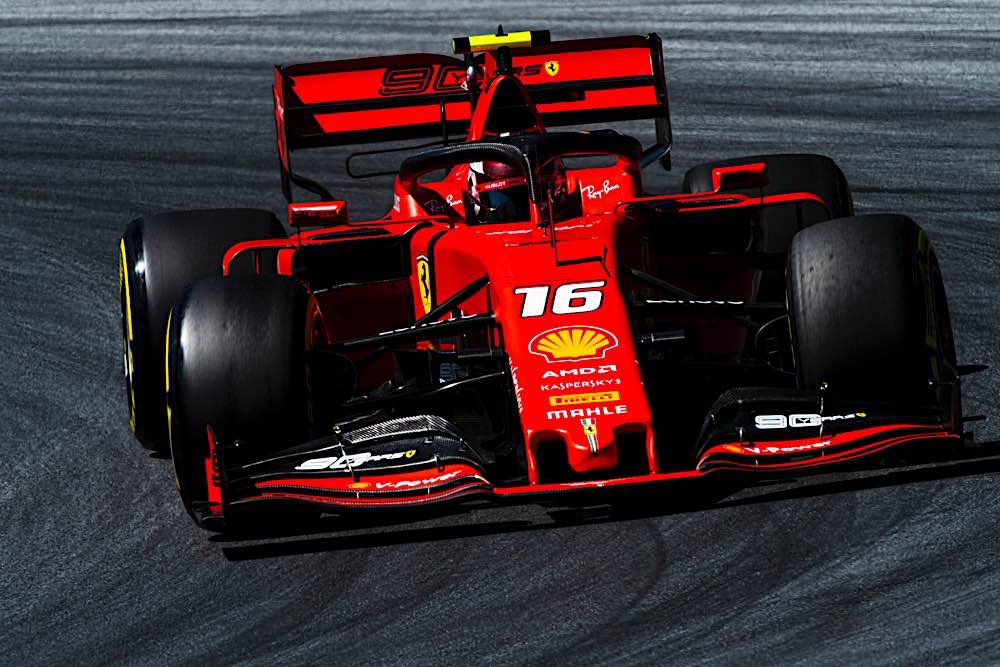 Charles was first for so long, but pipped at the post

After the dreadful French GP I was nervous when the website editor asked me to report on the next race. Nervous that I would sleep through it all, especially with all the fizz in the Paddock Club that I decided to lash out for.
But instead it was edge-of-seat stuff all the way, including the normally dull-as-ditchwater practice sessions. Despite being considerably emasculated over the years the Zeltweg track still exudes class and atmosphere and its resurrection by the Red Bull company has turned it into a first-class facility, with elevation changes, tightening corners and a set of kerbs that seemed to befuddle the best of them – as well as costing a lot of money in spare front wings.

The race of course had that essential ingredient – a mixed up grid. Whilst Charles Leclerc continued his practice form with pole position in the qualifying session, behind him things were a bit unusual. Hamilton would have been second but got a three-place penalty for impeding Raikkonen, and this moved Verstappen onto the front row with Bottas just behind. Magnussen finished quali in an excellent fifth but then got a five-place penalty for a replacement gearbox; this in turn moved Hamilton back up a slot and so it was an all-Merc second row.

And where was Vettel? He took no part in final qualifying because of a pneumatic issue with his engine and was therefore classified tenth, although the Magnussen penalty turned that into ninth. Why don’t they just accept that a mixed up grid provides for the best races and draw the names out of a hat?

The start gave the race another ingredient for excitement when Verstappen’s Honda engine went into anti-stall mode and he staggered away in 8thplace. At the front Leclerc kept his cool and began to pull away from the two Mercs. On this very hot day the latter had cooling issues and clearly could not use the full power of their engines (or power units or whatever we are supposed to call them). But in the meantime Max was turning up the wick, quickly passing Norris and Raikkonen, and on a long run on his first set of tyres he passed Vettel and Bottas during their stops, and when he finally stopped on lap 30 he was actually in the lead.

His stop dropped him back to fourth but on his relatively fresh tyres he was able to catch and pass Vettel, then Bottas for second place, and for a thrilling last 5 laps of the race he closed inexorably on the leading Leclerc whose tyres were by now 8 laps older and running out of grip. Max tried to pass the Ferrari on lap 68 (of 70) and, despite getting past, he was outdragged by Leclerc who resumed his lead until the next time they got to turn 3. Max had learnt his lesson and brusquely shoved his Red Bull up the inside of Leclerc and ran the Ferrari out of road on the outside of the turn. Leclerc had no chance of retaining his lead.

There was the expected outcry from Leclerc and Verstappen was invited to see the stewards but after some hours of deliberation they decided it was a fair manoeuvre and no penalties were handed out. Wish they had been equally realistic in the Canadian Hamilton vs Vettel incident…

Had the verdict gone against Max it is unlikely the stewards would have been able to leave the paddock other than by helicopter.

It was a shame that Leclerc had been denied his first GP win, but his time will come. The ‘home’ victory for the Red Bull was well received although how a car built in Milton Keynes, driven by a Dutchman and powered by a Japanese engine could be thought of as Austrian is a bit beyond my pay grade.

Vettel had a quiet race after his lowly start and never seemed to get his Ferrari on the pace of his team-mate. He stopped for a second set of new tyres towards the end of the race, lost his fourth place to Hamilton but got it back again thanks to his newer rubber. The Mercs therefore finished in third (Bottas) and fifth.

Unfortunately, the one day the Mercs got beaten, it was not by a Ferrari but a Red Bull. The two stars of the show were undoubtedly Verstappen and Leclerc and, as many others have already commented, we have surely seen the future of F1. That is, as far as drivers are concerned, but whether these unattractive and awkward to race cars will ever allow decent wheel-to-wheel racing is very unlikely. The Austrian GP made it possible because of a tricky and picturesque track unlike that horror in France.

Whilst all this was going on at the head of the field the B-class race was again won by McLaren, with Lando Norris in an impressive 6thplace and Carlos Sainz, starting from 19thup into 8thby the end. I admire the way McLaren have recovered from their doldrums of the last few years, although it hurts this Ferrari-lover to say anything nice about the hated Grey Empire of the past.

Next we go to Silverstone for the British GP and I suspect we will be back to a DRS-dominated race without much wheel-to-wheel stuff. I so hope I’m wrong.