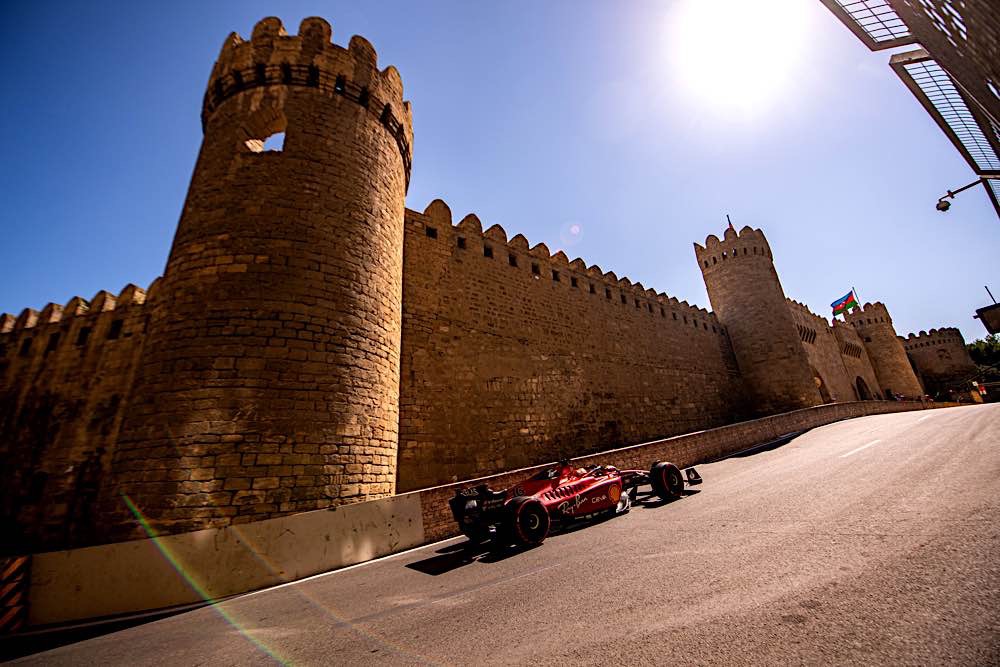 Castle is a dramatic background. 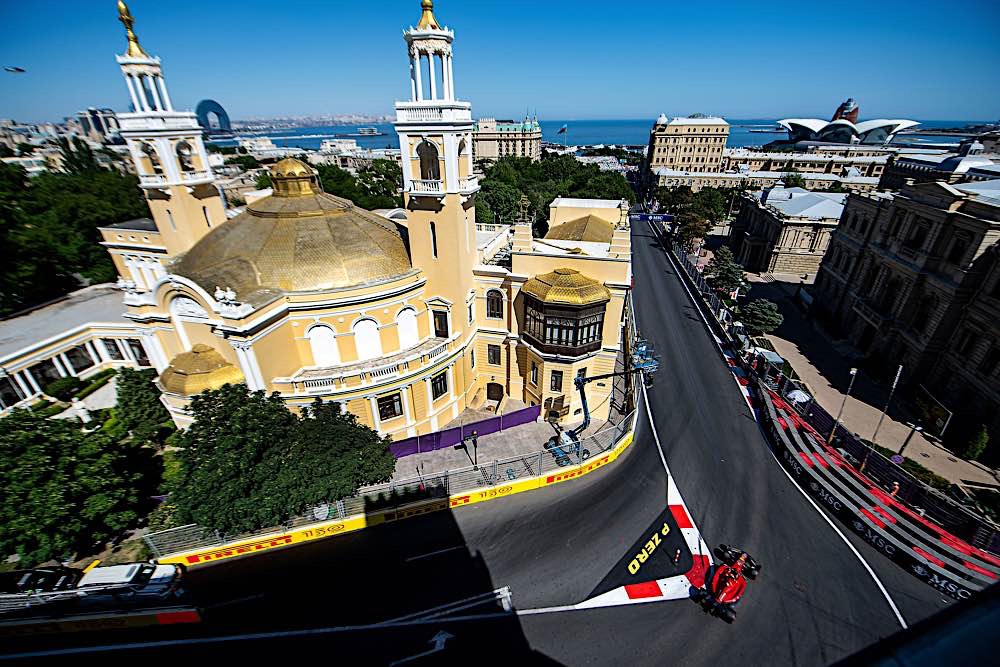 On the Caspian Sea, bordering Russia and Iran, Azerbaijan is an interesting country. 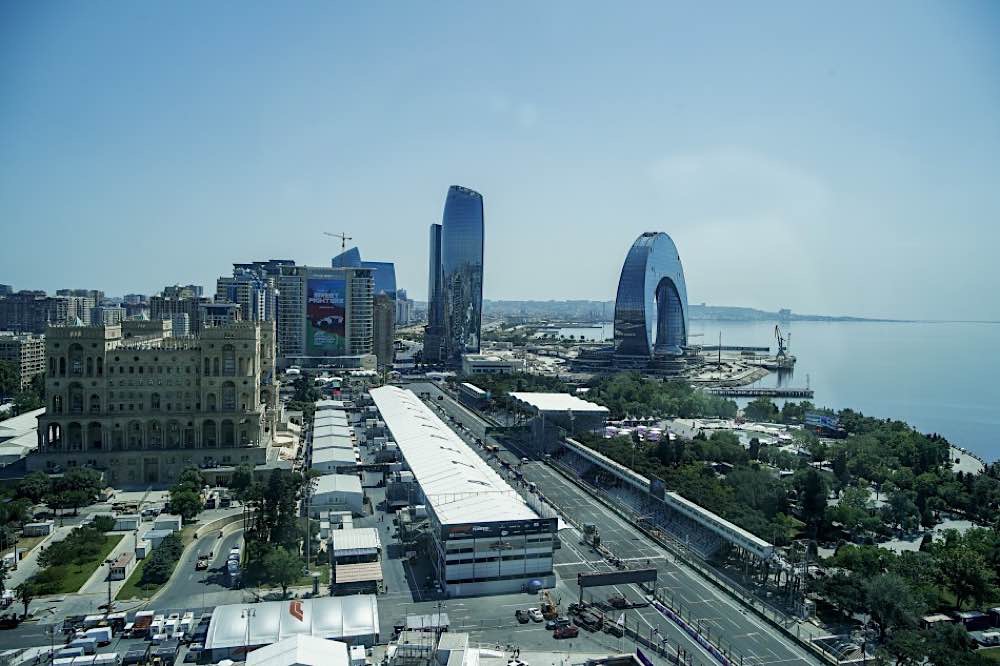 The modern side of the circuit includes the 2 mile straight.

Report by Tony Cotton (with thanks to the FIA race report).

My apologies that this report is a bit late. I’ve been lying down in a darkened room, trying to come to terms with things. I also spent quite a lot of time trying to post it with a black border but apparently that isn’t possible.

There were two problems at Baku, and both were attributable to the long straight. The first was the inevitable porpoising, and that seems to be an ongoing issue. However, during first practice, it became clear that RedBull had the upper hand in top speed, whether through less drag or more power. Then, suddenly, Ferrari became competitive. In a club formula we might change the gearing to achieve this, but of course that isn’t an option in F1 where for “economy” reasons the ratios are fixed. Whether it was running a few extra revs or, as our technical consultant suggested, amending the ignition map, it proved a very effective mod, winning pole.

Let me now digress into Roman History. In 280 BC and 279BC, King Pyrrhus of Epirus fought the Romans at the battles of Heraclea and Asculum. He won both but he lost so many of his army, both the general forces and the commanders who were also his friends, that he realized another battle was impossible. The dreadful cost of victory in those battles had lost the war, hence “Pyrrhic Victory”. If there is such a thing as a Pyrrhic Pole, then Charles won it at Baku. Not only did the tweaks introduce engine unreliability that destroyed the race itself, but their legacy damaged Charles’s chances in Canada.

Both drivers got their F1-75s through to Q3 without any difficulty with Carlos going quickest on the first run in 1’41”814. All the leading drivers then pitted for a new set of Softs before going out for a final attempt. Carlos brushed the walls on his second run and had to settle for fourth, whereas Charles produced a truly perfect lap to post a time of 1’41”359, a 0.282s margin to Pérez who beat team-mate Verstappen by five hundredths of a second.

Russell put in an excellent lap to take P5 ahead of Gasly. Hamilton was left with seventh place ahead of Tsunoda and Vettel and the final top 10 spot went to Alonso.

There had been a drama in Q1 as Latifi, at his second attempt at an accident, successfully put the Aston into the wall at Turn 2. With only 2 minutes remaining, the cars lined up nervously at the pit exit. Sensibly, both Ferrari and RedBull stayed in the garages and the others all just managed to cross the line in time to run qualifying laps.

Charles got away well but Pérez’s start was fractionally quicker and as they reached the end of the short run to Turn 1 the Red Bull driver was able to steal the lead though the corner. Verstappen slotted into P3 ahead of Sainz and behind the leading quartet George Russell held fifth ahead of AlphaTauri’s Pierre Gasly and the second Mercedes of Lewis Hamilton. If the idea of Hamilton as a Mercedes driver was, all those years ago, to appeal to the well-heeled yoof market (AMG A45S anybody?), then surely Russell is there for the traditional Mercedes buyer – sensible, reliable, good but slightly dull (230 W123). He fills the role well.

At the front, Pérez quickly began to carve out a gap and by the end of the fourth lap he was 2.2s clear of Charles, who had Verstappen in his mirrors. By the start of the next lap Verstappen, aided by DRS, had closed in on the Ferrari driver, but Charles defended well. Then, on lap nine, Sainz suddenly lost power and was forced to take the escape road at Turn 4. The Spaniard tried to resume but it quickly became clear that his race was run due to what was later confirmed as “a hydraulic issue”. Charles suffered the dual frustrations of no drive but stuck in gear. He later commented “Together with Charles’ issue, this is definitely a difficult day for the entire team and our fans, as we lost valuable points and mileage. For one reason or another, it’s been complicated to build a strong momentum so far this season.”

The Virtual Safety Car was deployed and under the caution Ferrari pitted Leclerc. The Monegasque driver’s switch to hard tyres was delayed by a stuck front jack and with Red Bull choosing to stay on track, Leclerc rejoined in third place, just under 13 seconds behind Verstappen who was now second and 2.0s behind Pérez.

Behind the leaders Russell, Gasly, Aston Martin’s Sebastian Vettel, Hamilton and Alpine’s Yuki Tsunoda all pitted for hard tyres. Vettel, who had passed Hamilton in the pit stops, locked up while trying to overtake Alpine’s Esteban Ocon. Whilst he dropped to 12th place as a result, for me it was a highlight of the race when, well before stopping in the run off area, he had started a perfectly executed spin turn to return.  That left the order behind the leaders as Russell in fourth place after his stop, followed by Alpine’s Fernando Alonso, the McLarens of Lando Norris and Daniel Ricciardo and Gasly, all of whom needed to make a pit stop.

On lap 15, Verstappen closed on Pérez and with DRS “made his move past his team-mate” (and in no way was let by, honest)  to take the race lead. Behind them Charles was closing in, running a second quicker than the Red Bulls and by lap 16 he was 7.9s behind Pérez.

Pérez pitted at the end of lap 16 for his switch to hard tyres but he too suffered a slow pit stop, this time caused by a problem with the gantry lights. Charles swept past and Checo rejoined in third place just ahead of Russell. Verstappen made his pit stop at the end of lap 18 and after taking on hard tyres he rejoined behind Leclerc who now led by 13.6s. But on lap 20, the shape of the race changed completely. A plume of smoke suddenly bloomed from the back of the Ferrari, forcing retirement. Verstappen retook the lead, 5.2s ahead of Pérez.

On lap 21, Gasly DRS’d  past Ricciardo for fourth place. Hamilton was now sixth ahead of Tsunoda, Ocon, Vettel and Haas’s Kevin Magnussen. Ricciardo, still on starting hard tyres, then lost fifth to Hamilton. At the front, Verstappen began to pull away from his team-mate and on lap 28 he was more than seven seconds clear of Pérez, who had settled into second place 13.6s ahead of Russell.

On lap 33, Magnussen pulled over at the side of the track as his Ferrari power unit rather worryingly expired and the Virtual Safety Car was deployed for the second time in the race. Red Bull took the opportunity to pit both its drivers for more hard tyres. Russell, too, took on fresh tyres but Gasly stayed out, soon struggling on his ageing hards. After a couple of rebuffed attempts, Hamilton passed him on lap 44.

In the final laps the order settled and after 51 laps Verstappen crossed the line to take his 25th career win. Behind him, Pérez took his fifth podium finish of the year to seal the one-two for Red Bull. The Mexican also grabbed the extra point on offer for fastest lap. The final podium place went to Russell, who scored his third P3 finish of the season.

Behind them, Hamilton finished fourth ahead of Gasly, while Vettel secured his best finish of the season to date with sixth place. Alonso finished seventh ahead of the twin McLarens of Norris and Ricciardo and the final point on offer went to Ocon.

This was the first race since Australia 2009 when Ferrari failed to score – and at the opener in 2009 “teething troubles” were a valid excuse. It’s concerning that the team has started the season so well but while their principal rivals have built up reliability, Ferrari seem to have traded off speed against dependability. Mattia Binotto, in his entry for “blindingly self evident understatement of the year” said “There is still work to do”.

I suppose the tiny trace of racer in me thinks it’s great that the team is, almost Villeneuve-like, apparently adopting a “go for the win” mentality, and it is wonderful that this is now possible. Perhaps it’s only hindsight and the accountant in me that says a solid 3rd  is a more attractive proposition.