GRAND PRIX: Azerbaijan: Nobody was expecting that…. 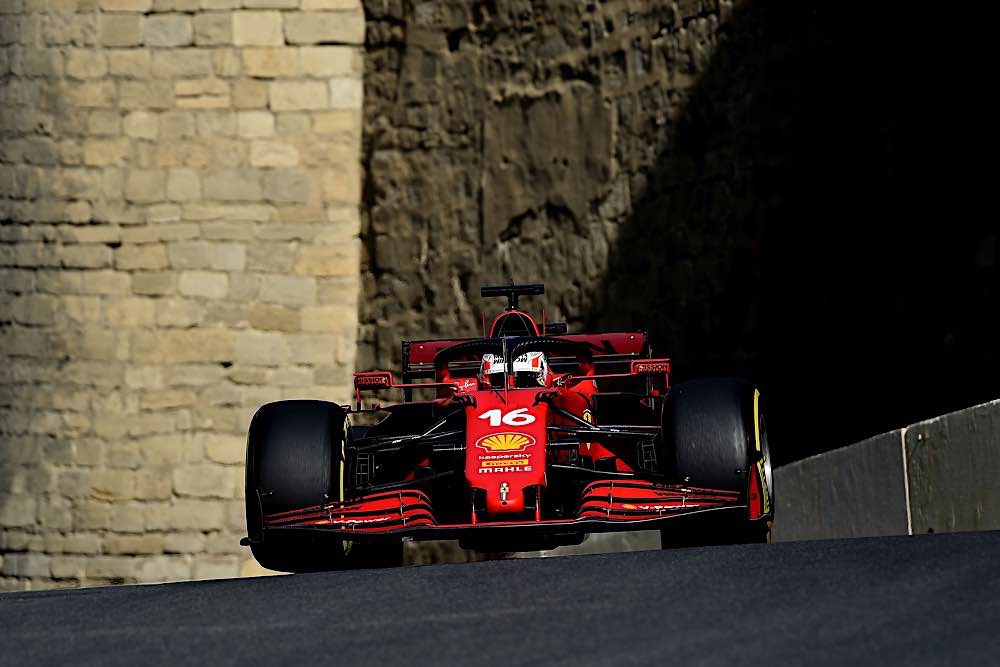 Much of Baku offers dramatic backgrounds 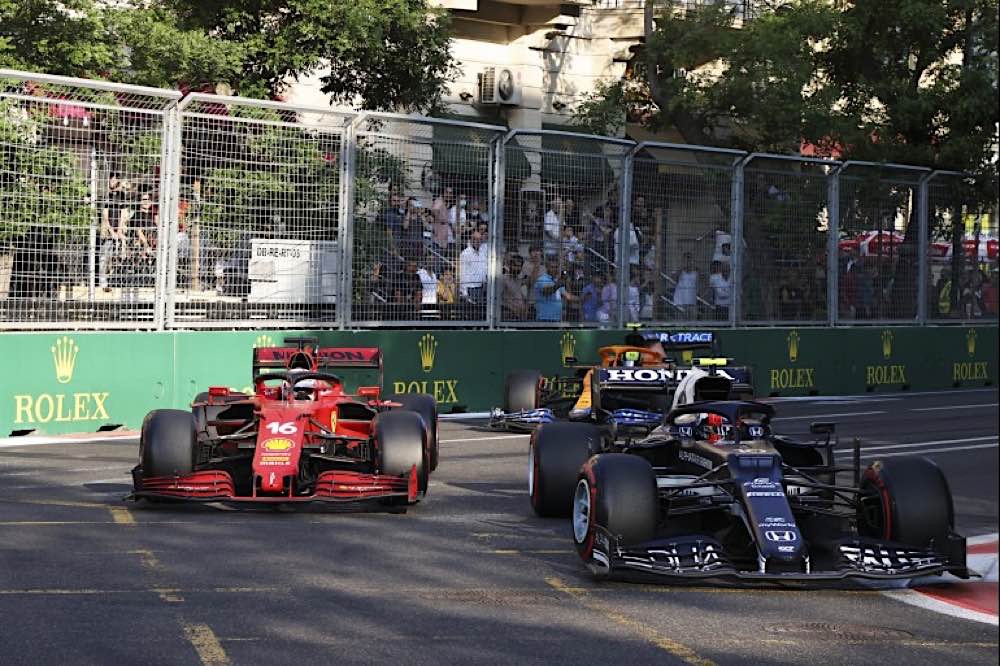 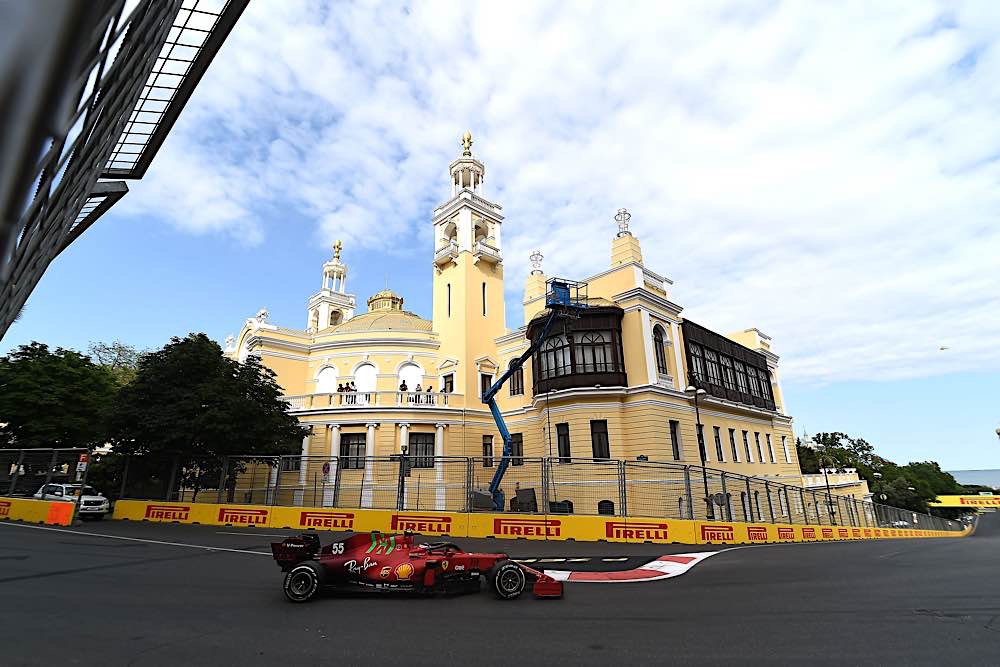 Baku is rightly proud of its historic architecture

Baku is on the Caspian Sea, and to aircraft anoraks that suggests one thing: the glorious Ekranoplan “Caspian Sea Monsters”  of the 1970s. In case you haven’t heard of these, they were a cross between a ship, aircraft, hovercraft and hydrofoil. They arguably reached their peak with the 540 tonne, 300 mph, 10 engined KM which literally floated on air (a ground effect cushion) a few metres above the water. Despite massive effort and investment, and being remarkably aerodynamically efficient, they proved to be overweight, overcomplex and a technological dead end. How I hope that these aren’t characteristics shared with the 752kg , 220mph, c900bhp+160bhp KERS hybrid F1 cars we saw at the Azerbaijan Grand Prix.

Leaving complexity to one side, the 752kg weight and 220mph speed of F1 cars are a major issue. Hopefully no spoiler alert is needed when I say that tyre failure proved to be decisive in Baku.  Debris was, as usual, the primary suspect, but the immediate reaction of many, including myself, is that tyres should stand some rough treatment. I then saw a set of newish slicks that ran for a few minutes at Curborough on an F3 car. The surface was soft to the  point of being almost fluid. Stones – sharp or blunt – were embedded several mm into the surface, and had to be levered out of the tyre with difficulty. Even a cable tie was swallowed up. Now imagine how, after extensive running at high speeds and aggressive loading, the surface of an F1 tyre will want to absorb any foreign object, especially if it is carbon-fibre sharp.  Also recall that the F1 car is closer in weight to some Ferrari road cars of the past than it is to the F3 I saw at Curborough, and only 100kg lighter than a 333SP Sports Racing Car. The sport, by demanding exceptional grip in such heavy cars at high speeds, is asking Pirelli for the near impossible. As speeds and weights increase, the grip needed grows dramatically, yet the laws of physics are unbending. Something has to give. And in Baku it did so, twice.

Charles won his 9th F1 career pole, and of course the second successive pole of 2021. The Q3 session was stopped when Yuki Tsunoda,  doing remarkably well to reach Q3 in his Alpha Tauri, hit the turn 3 tyres. At the time, Charles was on what seemed to be a quicker lap, and Carlos looked ready to improve on 5th, but it was not to be and in fact Carlos was caught off guard by smoke from the incident and joined the Japanese lad in the barrier. He wasn’t happy.  Carlos was just 13 thousandths slower than third placed Max Verstappen and 11 thousandths behind the increasingly reliable and quick Pierre Gasly in fourth. The session was not resumed.

Ferrari Racing Director Laurent Mekies said that the result was  “even more unexpected than the one two weeks ago in Monaco. Our performance level was better than expected right from the start of practice, even though theoretically this track should be less suited to our car.” Good signs.

It goes without saying that Hamilton filled second, between Charles and Max. He had, one must assume inadvertently, given Charles a tow which obviously helped after the poleman made a couple of small self-confessed mistakes on his best lap. For Hamilton, a tow from Bottas and a low downforce setup helped resolve practice issues where the Mercedes was just plain bad – 11th and 16th at one point. One can’t help wondering whether Toto Wolff should adapt and adopt Enzo’s famous saying: “Aerodynamic protests are for people who can only make engines”. Unlike the Ham, life didn’t actually improve much after practice for the hapless Finn, who squeezed into Q3 but managed only a distant 10th.

Norris had a bit of bad luck when, having qualified 6th, he was dropped 3 places for not entering the pits when the red was shown. He hesitated very slightly, missed the pit entrance, and as he isn’t a Mercedes they couldn’t ignore the offence so docked him to 9th rather than 11th where the code says he should have gone. In 7th (6th), Perez was disappointed to not have another attempt while Tsunoda’s crash was while trying to improve on an impressive 8th(7th).  I still can’t decide about Tsunoda. Alonso was 9th, while Vettel failed to reach Q3, and for the first time I can recall, two cars (Stroll and Giovanzzi) were unclassified under the 107% rule, partly as a result of three other red flags.

It was an unusual qualifying, and apart from the dismal Haas and Williams cars, all the teams’ cars were nicely scattered rather than the neat but boring 2 by 2 we sometimes see.

Fingers were crossed for Charles. It seemed to work because he reached the grid, unlike in Monaco, and then still led at the end of lap 1. Hamilton was using all of his undoubted skills in a difficult car, and was quickly able to pass Charles. The Monegasque  held off Max for another 4 laps, but then lost out on his DRS deployment behind Ham as the ultra-low drag Merc disappeared on the straights, while first Verstappen and then a fast starting Perez who had jumped to 4th at the start, swept past him under their DRS.

During the pit stops, Hamilton had an unusual piece of bad luck as Gasly was (legally) in the wrong place at the wrong time and he had to be held back, allowing Max to take the lead and Checo to slot into 2nd. As Charles said: “Despite starting at the front, we knew we could well be overtaken by the cars of the two front running teams.” Well, make that  1½ front running teams, as Bottas was still in 10th. For perspective, that’s two places behind Tsunoda’s Alpha Tauri.

Charles had dropped to a frustrating 7th after the pit stops, while Stroll in his Dad’s Aston had started on hards and not taken part in the first round of pit stops. This seemed a clever move until lap 30 when without warning the lesser-loaded left rear failed, pitching him into the pit wall with substantial car but fortunately no Lance damage. At the time, tyre failure was only one of the possible causes considered and after a lot of clearing up under the safety car, the race continued. Vettel subsequently led for 4 laps by extending his use of the softs during the stops. Those Astons must be kind to the tyres.

With the unexpected drama out of the way, we settled down again to Max and Checo controlling the front and Hamilton hanging on to the Mexican. The “out of phase” tyre strategy of Vettel proved productive for him as he passed Charles and Gasly on lap 36 for 4th.

After 10 more laps, lightning struck for a second time. Another tyre failure and again left rear, but this time the leader, Verstappen, at 200mph. One imagines that much midnight oil will be burnt in Milan, as Pirelli try to find why the tyre failed (almost certainly “debris”). And no oil at all will be burnt in Paris as the FIA will not think for a moment that part of the reason for the failure is the car spec. RedBull had to tell the perpetually bewildered Masi that the failure was unexpected and that a red flag to allow general tyre changes might be wise. Fortunately, he accepted the advice.

Article 42.8 of the sporting code concerning resumption after a red flag states  “The race will be resumed behind the safety car”, so naturally the cars were gridded for a standing start. I can’t begin to attempt an explanation as to why.

What happened next had a fortunately happy ending but it could have been carnage. Hamilton sat in P2 behind Perez with brakes smoking. He had apparently used the “magic brakes” button, which despite its silly name switches the bias heavily to the front to warm the front brakes and hence wheels and tyres. As the red lights went out, Hamilton had a great start and moved over, though not as much as Perez. He had to reconsider his chop and, if you accept the story of Wolff and Hamilton he caught the “magic” button and switched off the rear brakes. Needless to say, the fronts locked up and he skated off straight ahead, down the escape road, fortunately with no contact. Had he been in the middle of the pack, who knows what would have happened. If you discount the theory that in fact he had forgotten to turn off the “magic brakes”, then the only conclusion that is left is that Mercedes’ design and engineering  is negligently bad by allowing such a safety critical matter as turning off part of the brakes to be so easily invoked. And it’s another example of unnecessary, complex technology, ekranoplan-style.

However, all was well except for Hamilton, and it has to be said that only those with a heart of stone could not have laughed embarrassingly loudly. Starting from 5th, Charles looked to have a chance of a podium as Gasly’s power unit misbehaved slightly, and the lap chart shows him 3rd on the penultimate lap, but when it came to the flag the podium just eluded him. I’ve barely mentioned Carlos, for whom the race was probably best forgotten. “I didn’t have the same feeling with the car that I had had all weekend. I struggled a lot with front locking and with the brakes.  I’m not happy with the result.” 8th was a result that flattered a car that spent much of the race in the company of the Alfas.

For Perez, it was a joyous win and well deserved, Seb in second was a remarkable achievement from 11th on the grid, both representing the marques that had experienced tyre failure. Gasly in third continues to punch above his weight, as indeed did his team-mate Tsunoda in 7th. The shake-up in the results continued with Alonso bringing the Alpine in 6th, whilst McLaren had 5th and 9th, Lando dragging himself back from the penalty and Ricciardo still struggling to look comfortable at Woking. Final points scorer was Raikonnen.

Whilst not an inherently exciting race, it was undoubtedly memorable for many of the wrong reasons.  It’s one of the oddball circuits, and the next race is Paul Ricard in France where power/drag ratio is key. Has the team made the progress needed to take the fight to Mercedes and RedBull? Will the wing rule changes affect the order? As long as I don’t have to drink the cough medicine the place is named after, I look forward with eager anticipation.