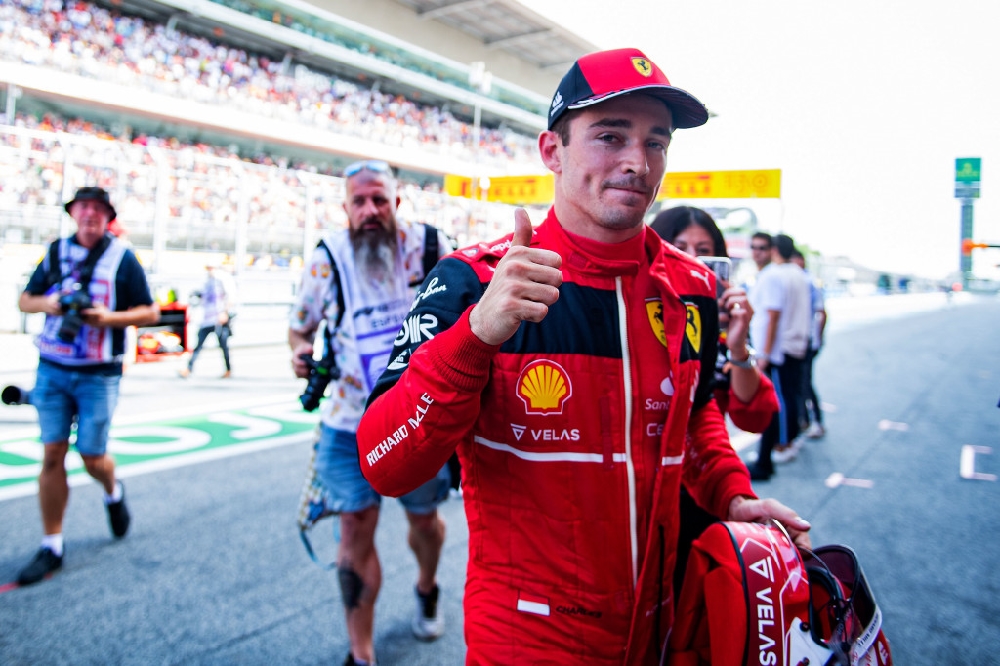 Charles was happy after qualifying. 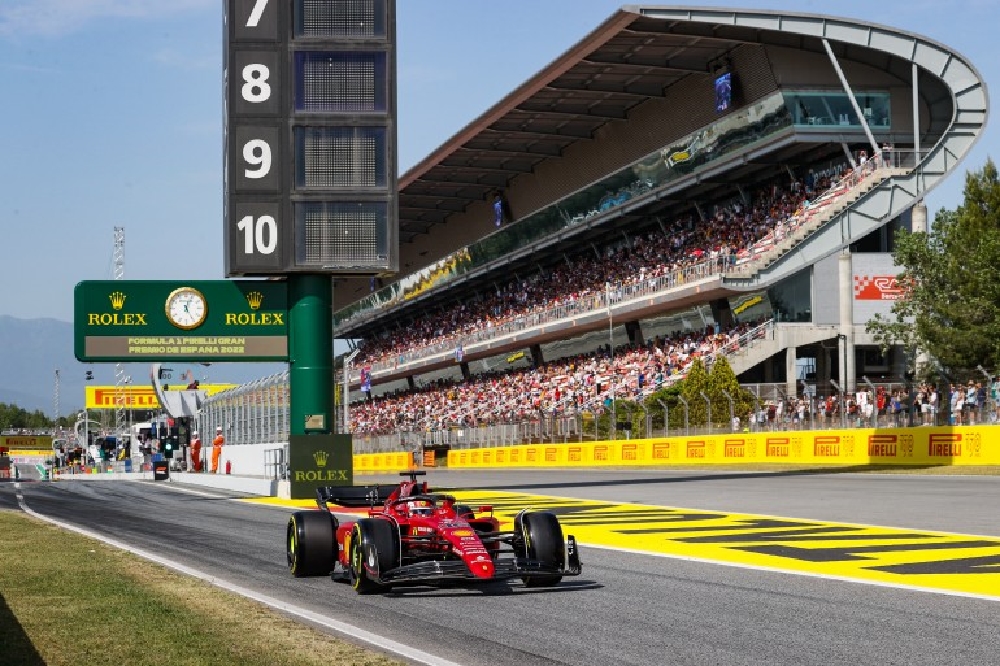 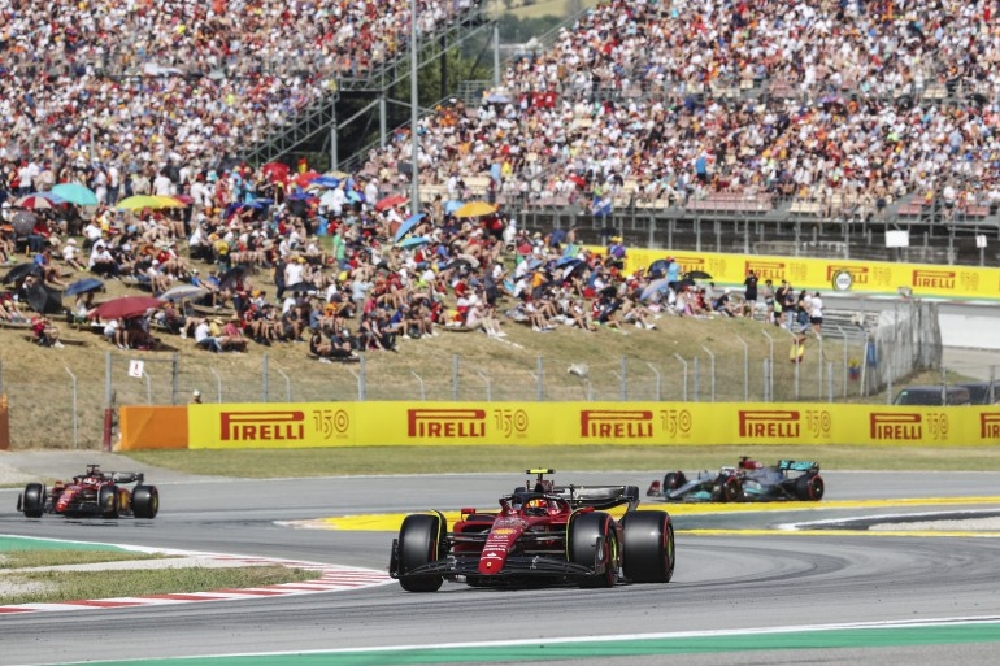 With the pandemic probably past, the crowds are truly back. 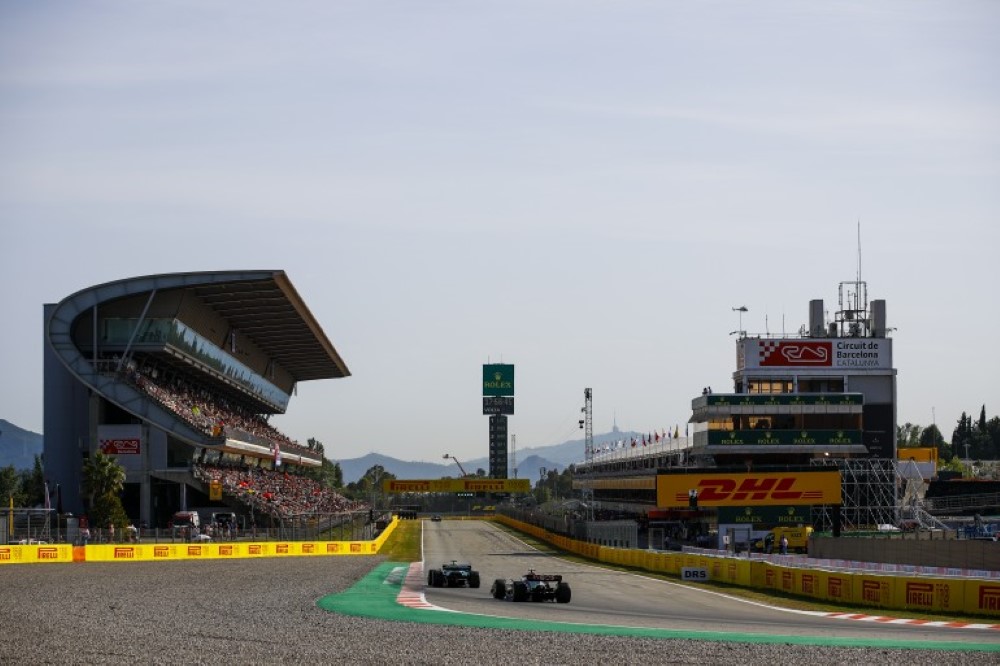 Unlike my peers Winston and Nigel, I (just) remember UK Prime Minister Harold Macmillan. When asked what was the greatest challenge facing a statesman, he replied “Events, dear boy, events”.  Or to put it another, less Eton/1950s and more 21st century/Wolverhampton way, “S**t happens”. Step forward Charles Leclerc.

Having been disappointed with “only” second at Miami, Charles had a nice little job to do at the Monaco Historic meeting: to drive the ex-Niki Lauda 1974 312B3. Only a demo, mind. Nothing could go wrong; at least not until the brakes stopped working properly because of “a screw of the brake pads” (sic), according to the report I read. Cue Charles arriving backwards at the Rascasse barrier. Also cue somebody at Maranello looking forward to a P-quarantacinque. Flippancy aside, Charles commented that perhaps driving old racing cars might not be a good idea in current circumstances, which is a real shame as it is always a joy to see a current driver in a classic machine. Events were to sneak up on Charles again.

Whilst Ferrari had looked quick in practice, there was a distinct question over race pace after the FP2 “long run”. Significant set up changes were required overnight which might have compromised qualifying speed, but worries were not justified. Strategy ruled in Q2, when Charles and the engineers sat it out after his first run, leaving more options for Sunday.  There was concern when Charles spun at the chicane before the final corner on his first Q3 run. The team kept calm and he was despatched with ideal timing and had a clear run to a 1:18.75 pole, 0.6s quicker than Verstappen who ominously for RedBull had a tiny bit of a power unit issue. Carlos managed 1:19.166, less than 1/10th away from the Dutchman. Presciently, he commented after qualifying that the back was “very light”.

George Russell continued his upper hand performances at a recovering Mercedes to place 4th, two places ahead of his number 2. Having him as a “spacer” between Carlos and Perez in 5th looked useful.

Bottas continued to successfully showcase the Alfa with 7th, while the top ten finished with Ricciardo making an escape from mediocrity with 9th (his team-mate Norris suffering badly from tonsilitis), and remarkably both Haas (Magnussen 8th, Schumacher 10th) being in the top 10. This gave half of the top 10 qualifiers to Ferrari engines, and it also seems perhaps that Haas are being groomed as the B team while Alfa-Sauber can be released for sale to a leading German Automotive Group, currently absent from F1. (surely not Borgward? -ed). As Stellantis seem to be moving to a Peugeot-based future and Alfa are getting more SUV than sports saloon based, a loss of Alfa naming might be on the cards for the Swiss based team.

It was also interesting to see who didn’t make it,  Vettel and Alonso both failing to clear Q1, despite controversial RedBull-style upgrades to the German’s Aston.

Charles had an excellent start, and despite inevitable challenges from Verstappen he held his place robustly. Straight behind him Carlos hit the anti-stall, and stuttered away like a Curborough start in 3rd gear (which coincidentally was exactly what your scribe was doing only minutes later). Naturally he was a bit swamped by Russell and Perez. However, further down the order, there was the inevitable mid-grid jostling. Who would have thought last year that Magnussen’s Haas would be challenging Hamilton? In a racing incident, the former went into the drive-through gravel at turn 4, the Brit returning to the pits with a  left front puncture, returning in last place.

There must have been a smile in the pits as Leclerc gradually built up a lead over the RedBull – 1.2 seconds after 5 laps. Smiles turned to anguish 2 laps later as a gust of wind in turn 4 upset the aero of the number 55 car, and Carlos spun off into the gravel. Despite driving out to 11th – not something that can be done on many circuits – the car suffered some damage which hampered Carlos’s drive back to the front. “Lack of downforce meant I was sliding with the tyres pretty much everywhere” which was a shame as the main benefit of the overnight tweaks had been improved tyre management.

As if to demonstrate that turn 4 gusts really are “a thing”, Verstappen suffered the same issue at the same corner, but this time understeered off and lost two places.  During his recovery, Perez was told to cede his place to him, which he did, though grumpily. Friction at the Bullery, I think. Whether caused by the off or not, Verstappen’s DRS failed which caused him problems in challenging Russell, now running second.

The tyre changes started, and such was Charles’s dominance that he rejoined on lap 21 with fresh mediums, 6 seconds ahead of Russell. Verstappen kept trying to pass Russell, the DRS working only intermittently which caused some verbally aired frustration.

Then “events” intervened. So far this season, the Ferrari power unit has given exemplary service, balancing power and reliability better than anything else. Suddenly Charles’s engine note dropped and he pitted, MGU-H and turbo being blamed. “No, No!, No!!” he cried. I think we all did.  Not only was this a loss of a dominant victory, but it reduces the available power  unit alternatives for later in the year, so is a potential double hit.

Russell was now leading, but the Merc didn’t look as strong as the RedBull. One has to admire their tactics, as Verstappen pitted for softs, while Perez chased Russell. On lap 31 after a feigned pass on the straight, he took the Englishman at turn 1.  Verstappen had rejoined in 4th, behind the impressively performing Bottas, who he passed on lap 31. The benefits of better tyres soon became obvious as he hunted down Russell for 2nd, closing at 2 seconds a lap. Russell gave up on lap 36, pitting for new mediums. Both RedBulls later also pitted for new tyres,  coming out 1-2 with Perez leading. More grumpy Checo as he was again told to cede the place, but in fairness Checo wasn’t then fighting for the championship lead.

With RedBull in 1-2, the interest fell to 3-4-5. Carlos had fallen to 11th after his spin, but gradually worked up his way past, amongst others, Norris, Stroll, Ocon (twice), and Tsunoda to be 5th by lap 26, dropping to 6th after taking on softs and passing Ocon yet again, on lap 45. Meanwhile, Hamilton, in the massively improved Mercedes, had recovered to 5th, but came out behind Carlos on fresh tyres by lap 48.

Carlos passed Bottas on lap 59 for 4th, but almost immediately Hamilton passed him. It initially looked as though this would be the final order, but those “events” came in again on the penultimate lap. Hamilton was told to slow due to power unit concerns, and as he seemed to be coasting into the corners Carlos took advantage to take 4th on the final lap, which was not a podium but after all the trials of the afternoon seemed like it.

Bottas continues to impress in the relative adversity of an Alfa to take 6th, ahead of Ocon and Alonso’s Alpines (7th and 9th), and Tsunoda 10th in the Alpha Tauri. Special mention must be given to Lando in 8th, suffering so badly from his illness that when the pit asked if he was OK, they had to ask again and suggest he presses the transmit button to signal all was well as he couldn’t speak. As I’ve said before, these drivers are different to the rest of us.

A power unit issue is of course concerning, but as Mattio Binotto explained, in Harold Macmillan mode, “these things happen”.

Loss of the championship lead is disappointing, as is RedBull’s new found apparent reliability, but both the qualifying performance and the upgrades’ effect on tyre management are distinct positives.

There’s a bit of a spectre in that Mercedes seem to be joining in the fight, but as long as Ferrari can stay ahead, this only adds to the excitement, and adds to the cars that can take points off RedBull.

Next stop Monaco,  so Charles can have a bit of a lie in and still be in time for FP1.

And on a completely non-Ferrari and non-Barcelona point, as she seems to win every W-series race, and appears to be utterly competent and media friendly, please could somebody give Jamie Chadwick a chance in F1?