GRAND PRIX: Belgium: Ruled by the heart or the head? 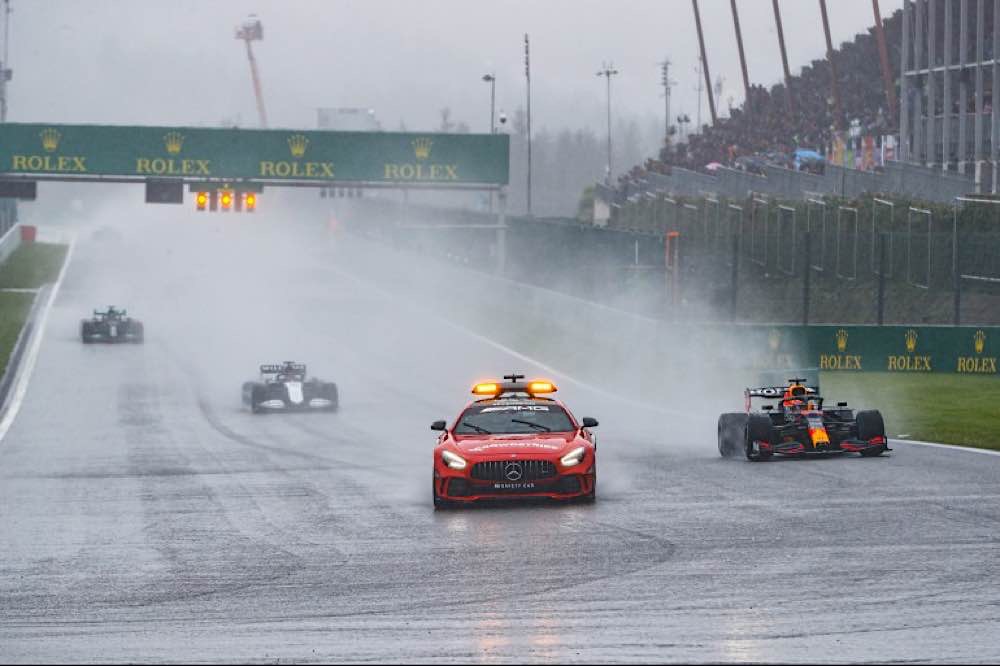 All laps were led by AMG - the safety car. 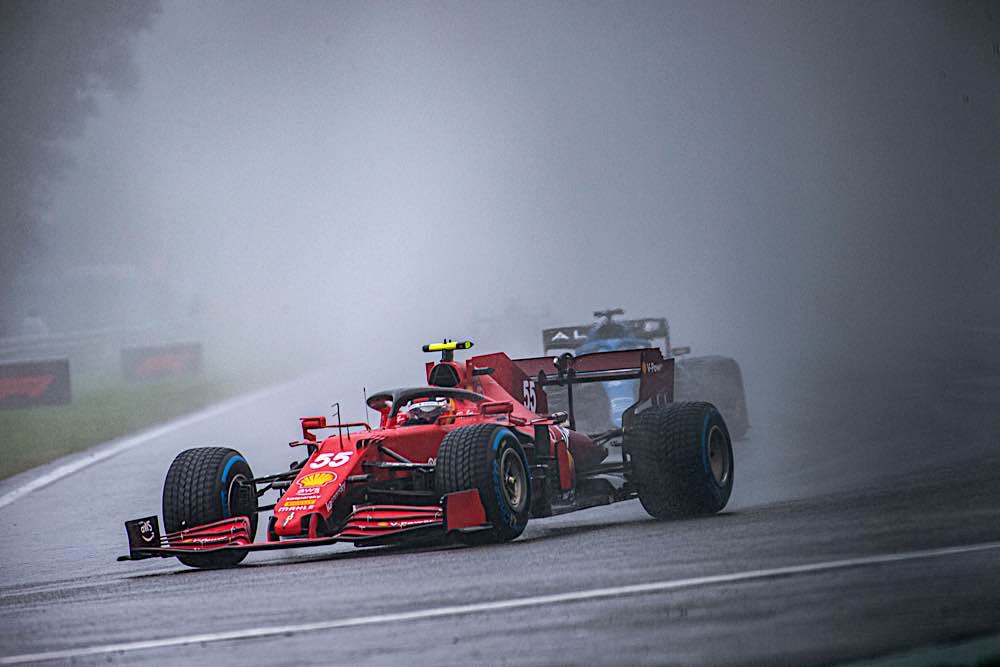 Visibility was a disaster. 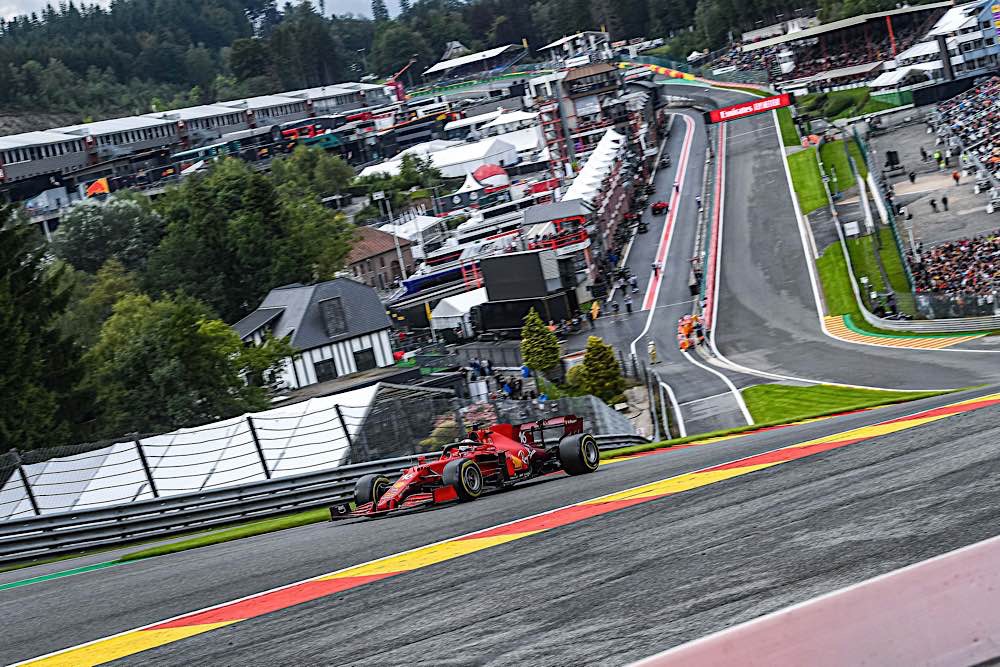 Heart or head? It’s a difficult question for any car enthusiast. When I bought a Morgan (what that? – Ed) in 1987 it was in every way a far worse car than my Golf GTi, but I loved it and still do, because it made me smile. I fear that over the years I’ve adopted the same approach to Spa-Francorchamps circuit. Almost every report of a race asserts it as the best circuit in the world, with the finest corner in Eau Rouge/Raidillon, and in my heart that is certainly the case. But the Grand Prix weekend made my head doubt the judgement.

Part of the attraction of the circuit is also part of its problem. The glorious Ardennes give it the contours and change of elevation that adds to its delight for spectators and drivers. Those same hills lead to a highly changeable climate, always happy to drop huge quantities of rain at a moment’s notice, and not necessarily consistently across the circuit.  Modern F1 is built, it sometimes seems, on soul-less data-led decision making. A capricious climate at the circuit must play havoc in windowless, air conditioned strategy rooms, not to mention finance directors’ offices.

As for Eau Rouge/Raidillon, it has been modified a little over the years but is still hallowed ground. It’s where I found that my scruffy old F3 chassis flexes. The gap between the throttle pedal beneath my foot and the bulkhead was nothing when I entered the corner, but quite big as I exited yet I’m sure I didn’t lift.  This doesn’t trouble professional drivers because downforce is now such that the corner can usually be taken flat. Sadly, “usual” and “always” aren’t the same as Sarah Moore found out in this year’s Formula W support. She lost it on the entrance as rain began to fall  and banged sideways into the barriers, bouncing back into the road. Five other cars did just the same in quick succession to result in one of the most horrific pile-ups of modern times. Fortunately a combination of halos and Tatuus chassis strength meant they were all OK. Still, when Eau Rouge turns on you, it bites unlike almost anything else on the F1 circus.

An off for Charles in FP2 and a shortened session made set up for qualifying even more challenging than FP2 11th and 18th might indicate. Sure enough, qualifying was challenging, even though Charles said he was  “quite satisfied with the car balance and our overall performance wasn’t bad considering the track conditions.” After a delay due to rain, both cars got into Q2. Surprise of the session was when Russell, on intermediates, beat wet-shod Verstappen by 5 seconds, prompting mass changes and opportunist timing of laps.

Q2 proved challenging for tyre decisions and their timing. At one stage, even Mercedes were struggling, but a late change to the “green band” tyres put them P2 and P3. There was no such fortune for Charles and Carlos, an unfortunate call on tyres resulting in P11 and P13.

More rain preceded Q3, and on his first hard lap, an over-confident Lando Norris got Eau Rouge wrong, slamming into the barriers and back into the road. It was fairly heavy, dismantling the McLaren rather more than Sarah Moore’s excursion, leading to clearly expressed concern from Uncle Seb both about Lando’s wellbeing, and then forcefully about the judgement of the race director. The session was stopped, and after a long delay restarted, still in rain but improving with time. Russell was already over-achieving by even being in Q3, but took full advantage of timing, set-up and a brilliant lap to put in a 2:00.09, which was faster than Hamilton could manage 9 seconds later. Verstappen did beat the time by a quarter second, but still the F1 family were lost for breath.  Another surprise was Ricciardo, coming back from the write-off pile for fourth ahead of Vettel in fifth. The inevitable Gasly, then Perez (who had to add on a 5 place penalty), Bottas and Ocon filled the other places. Norris dropped to 15th when the shattered remains of his gearbox were changed for a new one.

It rained, and it didn’t stop. After a 25 minute delay, the safety car led them for the formation lap, and the start was then abandoned. Unfortunately for Perez, this came after he’d dropped the RedBull at LesCombes on the out lap, putting him to the back where he joined Stroll, the Canadian punished by a 5 place penalty for Hungarian misdemeanours.  The repair was possible because the race was delayed for 3 hours.

The cars then followed the safety car from the pitlane, this being deemed a start, for 2 laps. The rain was now falling more heavily so they returned to the pitlane, and 19 minutes later the race was declared finished with half points awarded. Although there had been no racing, the result was not quite qualifying order. The “podium” was unchanged as Verstappen, Russell, Hamilton, and 4,5,6 were also unchanged. The loss of Perez and Bottas promoted Ocon to 7th and our own Charles Leclerc to 8th, ahead of Latifi (yes, really!) and Carlos Sainz taking the final half point. For once, the FIA and Ferrari were in unison when their official press releases headlined the race as a “wash-out”.

As a fan, my heart says it’s a shame that the race didn’t run as Charles and Carlos would surely have made their way up the order. But if there had been serious accident, I would be the first to condemn the organisers for starting the race. So it was a wise choice to abandon racing, though pretending 2 laps behind a safety car is a race is surely farcical.

It’s worth looking at some quotes.

Charles said: “I’d like to thank everyone who stayed in the grandstands hoping that the conditions will improve. It surely wasn’t easy and I have massive respect for every single person who stayed here with us. The track conditions weren’t that bad in terms of standing water, but in terms of visibility it was a disaster. I couldn’t see anything ahead and it was a good call to make sure we are all safe given the gravity of the rain today.”

FIA President Todt said that he was “sorry for the spectators who waited for hours in the wet and cold but the existing regulations had been correctly applied.”

Lewis Hamilton, whose opinions regular readers will know we always treat with great respect, said “The race was a farce. The points should really not have been given. I wish the fans get their monies back.”

Bearing in mind the conflicting requirements of giving the fans what they had paid for and not risking lives, Charles has successfully picked the tricky balanced line, with Hamilton being perhaps a bit too emotional and Todt appearing heartless and uncaring. Yet they are all correct.

Having been, in club racing, in exactly the same situation of dangerous conditons stopping a race, I am aware that either abandoning with no points or re-running it are preferred options. However, the cold-hearted accountant in me realises that the pandemic has drastically reduced revenue for both Formula One Management and Spa-Francorchamps circuit. A decision by either to refund ticket monies would be brave – one suspects it could perhaps push the circuit under if there was no reciprocal repayment from FOM. Added to these potential costs or the potential loss of future income as Spa attendees choose not to risk a 2022 ticket purchase we must add the re-sculpting of Raidillon to keep the cars that hit the barrier away from a return to the track. The question then arises, can the greatest circuit in the world afford F1? Or should it become the Laguna Seca of Europe, revered but used only in historic series?

But equally, with its reliably unpredictable climate, a safety record coming increasingly into question, and some pretty dull races, can F1 afford Spa? Can F1 afford the generosity of refunds either as a one-off, or as a precedent?  Or can it risk the loss of reputation that a farcical race may bring? It has been denied that money or TV contracts came into the decisions at the circuit, and of course I believe that, as I’m sure we all do…

There are some hard decisions to be made arising from this race, both short term and long term, for the good of the sport, the drivers, and a romantically great circuit. The answers could well depend on whether hearts or heads rule.