GRAND PRIX: Belgium: Worse than the bitterness of death, is hope 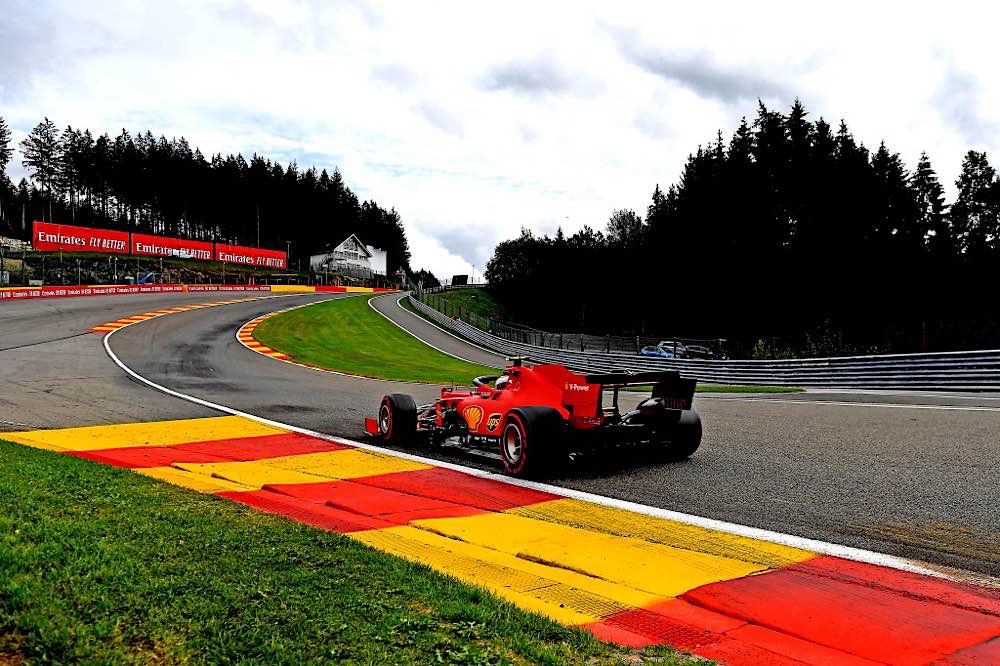 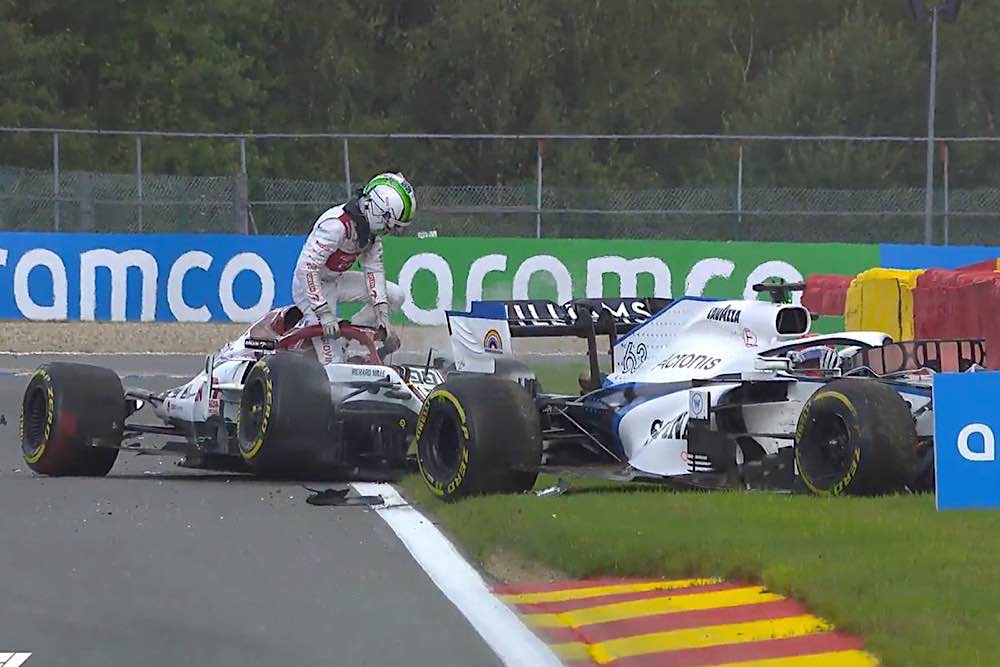 Defining moment of the race was the Giovannazi losing it at Les Fagnes. 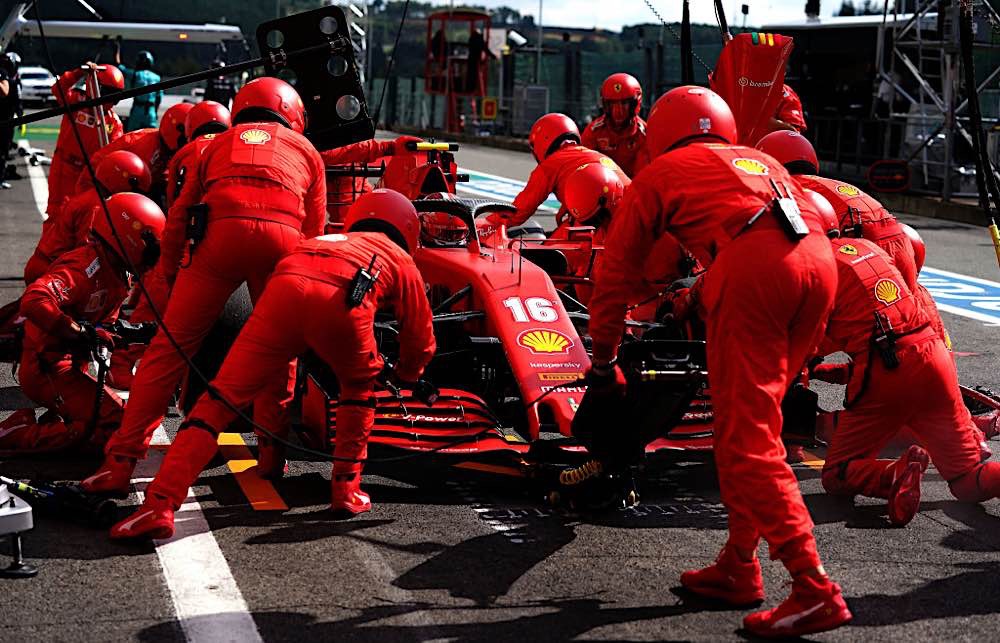 Efficient tyre changes for Charles were scuppered by topping up the engine air supply.

Well that’s the report out of the way, unless the meds kick in soon and I’m sedated enough to write a bit more about the race. Meanwhile, please permit me a rant.

I know nothing about cricket, but am quite good with quotations. The Victorian cricketer WG Grace was once bowled first ball in an exhibition match. He looked at the bowler. ‘They have come to watch me bat, not you bowl,’ he said, before replacing the bails and resuming his innings. That’s how I feel about Ferrari at the moment. They are the longest standing team in F1. I won’t count Alfa, that’s just sponsorship and it’s not continuous. There is more passion about Ferrari than anybody. As a team, we have more fans than anybody. Just as nobody came to see a journeyman bowl out WG Grace, so there can be few who come to see the admittedly admirable Racing Point, with a couple of average drivers, thrash Ferrari. It’s unnatural. Racing Point’s role is to be the underfinanced underdogs, punching way above their weight. Ferrari’s role is to fight for the Championship, and occasionally dominate it. I know that because I’ve been following this soap opera for the last 45 years. (Only 45? pah! – Ed)

And yet the FIA mandarins and Liberty Media seem to have completely missed the point. By imposing a disproportionate, secret penalty on the team over the winter resulting in engines with a significant power reduction they are doing their best to destroy years of heritage. If, as is thought to be the case, an honest misinterpretation of the rules meant that the engines momentarily used too much fuel, only to effectively “pay it back” a bit later, so what? The engine wasn’t over-size, no extra fuel was used, and no animals were harmed. It was an ingenious solution, and ingenuity is what F1 should be, and used to be, about.

Compare the swingeing punishment on the Scuderia (and the Tifosi) of destroying the competitiveness of both its cars and its engine customers’ cars with a fine of 50p and a gentle tutting meted out to Racing Point for photocopying a Mercedes. It was embarrassing to watch Ferrari at Spa, but it’s even more embarrassing to try to explain the madcap rules and running of the FIA to a mildly interested passer-by. There is still time for the Sport to do something about the misjudgement which has turned what should have been a thrilling season of Leclerc against Hamilton into a tedious procession, but I’m not optimistic.

Heritage also came into the big news of the last week or so, the sale of Williams to US venture capitalists, Dorilton Capital. A quick Google shows that their portfolio includes specialist engineering companies, a food company and a health care company; no racing connections whatsoever. Unsurprisingly, the departure of Frank and Claire after Monza has been announced. It will be an emotional time for the paddock and for fans.  Williams have been fierce competitors who did things their own way. They are almost universally held in equal measures of respect and affection.  I think anybody with a racing soul will hope that the name is preserved along with the enviable culture of a precision engineering company who happen to be in F1. It has been sad to see the decline of a once great name, so let’s also hope that in the near future Williams can be challenging Ferrari – not too closely though – for the top step rather than at the back of the pack.

Sadly, hoping for something is not the same as being optimistic that it will happen.

Contrary to appearances at one stage, both cars made it to Q2, with Charles 3 hundredths behind George Russell in the literally pointless Williams. Arguably, that was the high point of the team’s weekend. At the front Hamilton, Bottas and Verstappen ploughed their habitual furrow with Ricciardo livening things up with a fourth. The illegal Racing Points were disappointingly down in 8th and 9th, with both McLarens and the other RedBull and other Renault filling the top 10.

“Worse than the bitterness of death, is hope” said the poet Shelley. We had hope when Charles rose from 13th on the grid to 8th by the end of lap 1, but of course it was dashed by a combination of more powerful engines and the World’s Greatest Circuit. Gradually the others picked him off and he fell to 12th by lap 9. Then Giovinazzi lost it at Les Fagnes, the high speed esse at the back of the circuit, while under pressure from team mate Kimi. “He should have flippin’ let me past”, were (almost) the words of Kimi, always one for the sympathetic bon mot.

The violence of the impact led to both a left rear wheel and the tether point becoming detached from the Alfa, and so the wheel broke free into the path of the unlucky George Russell. Fortunately it avoided the cockpit area, but it made a strong case for the halo.  Both drivers were unhurt.

The incident led to a safety car and tyre changes, which resulted in nearly everybody pitting for hards to run through to the end.  Charles had trouble at that pitstop, and also the second. The issue was that the pneumatic valvegear had sprung a leak, so the air needed to be topped up, which takes 3 seconds, also known as “forever” in pitstop jargon. That dropped Charles to 14th, the position where he finished, and promoted Seb to 12th.

The ultimate ignominy for Seb was when Kimi, aged 40 and World Champion in 2007, passed him in an Alfa (aka Sauber) with a customer Ferrari engine. Frankly, if I had been Seb I would have parked up then and gone for several beers. Fortunately I am not Seb, he went on to finish 13th :” I think this track maybe exposed our weaknesses a bit more than others. We must learn all there is to learn and go forward.”

Mattia commented “We are disappointed and angry, as indeed are our fans and with good reason. It’s a difficult moment in a season that we knew from the start would be a tough one, but it’s at times like this that we need to stand firm and look ahead in order to get over this difficult period. It’s the only way we will get out of this situation.” One must admire his stoicism.

In the race, Bottas had a good start but a lucky mistake by Hamilton out of La Source caused Bottas to back off. Thereafter Hamilton drove the only way he knows – brilliantly accompanied by occasional wingeing – to the win. Bottas was from time to time challenged by Verstappen, but only had to be told to put a spurt on to put the Dutchman into his place, which as always is third. Ricciardo looked to be under pressure for 4th after the safety car tyre changes when he was jumped by Gasly and Perez, but they were running wacky tyre strategies so he regained the place by lap 21 and held it to the end.

Max really summed the track up well post-race. “It’s such an amazing track but you can’t really push. It was pretty boring to be honest. I really enjoy driving here…[but]  it’s not been the most exciting today.” Sadly, whilst no driver can fail to enjoy the track at Spa, it is rare that the racing is inspiring.

Max’s team-mate Albon looked to be on for 5th, having been there for 20 of the last 21 laps, but a choice of mediums for his last session proved wrong and Ocon used his DRS to pass on Kemmel straight. It would, of course, have been much more dramatic and better in every way to see the pass under braking for LesCombes, which is where it would have happened in club or historic racing. Without any late race heroics, Lando Norris was 8th, bringing some comfort to Woking’s finest as Carlos Sainz didn’t make the start due to an engine/exhaust problem. Not long ago Stroll and Perez would have sold their souls to be in the top 10; with the Pink Mercedes, 9 and 10 count as disappointing.

But not as disappointing as 13th and 14th.