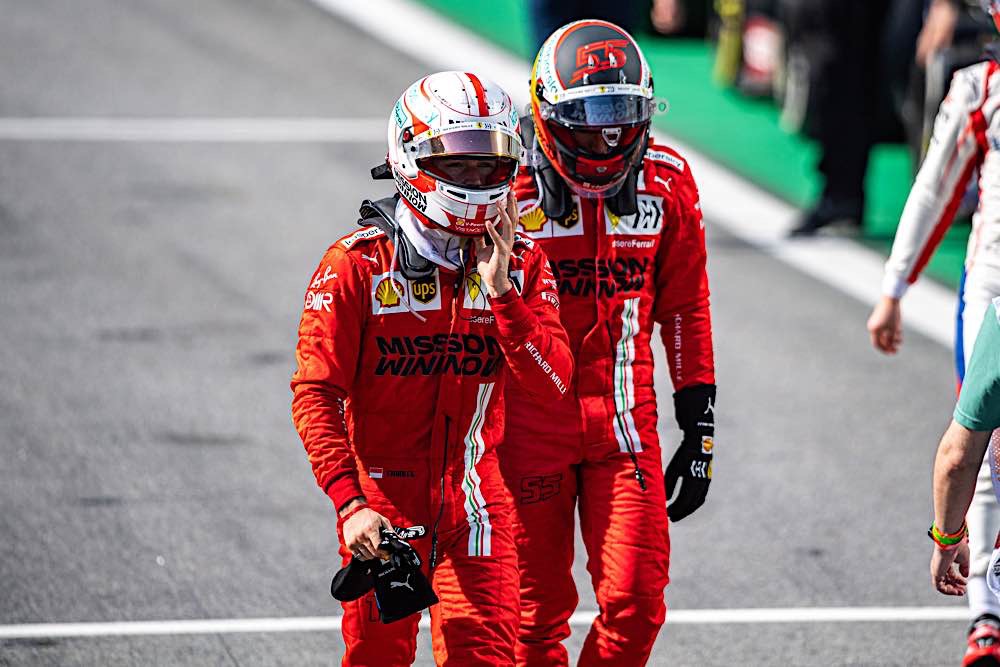 As good a result for the team as could be expected. 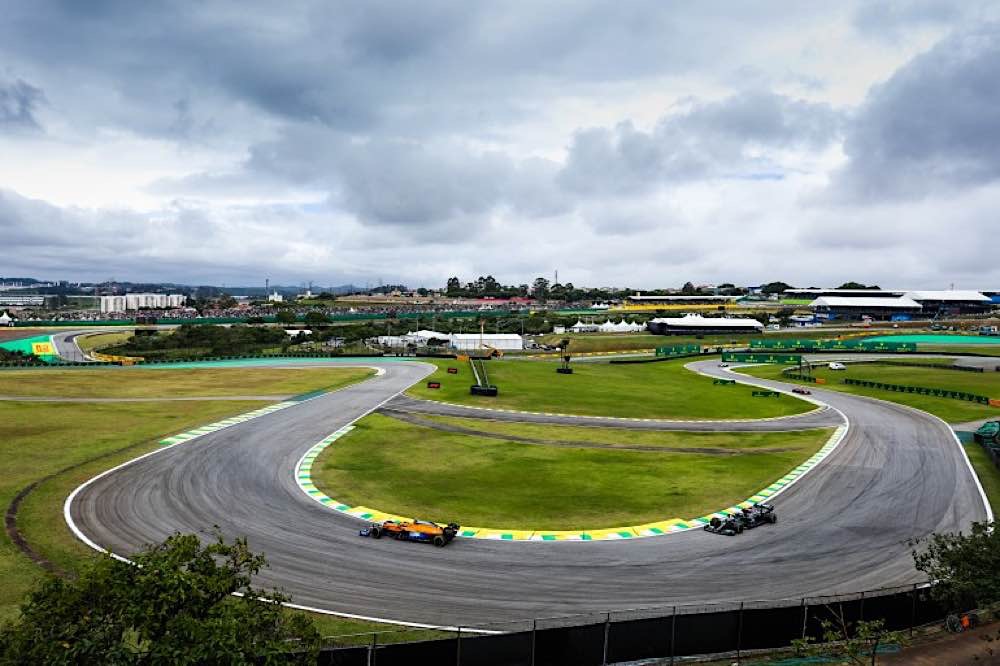 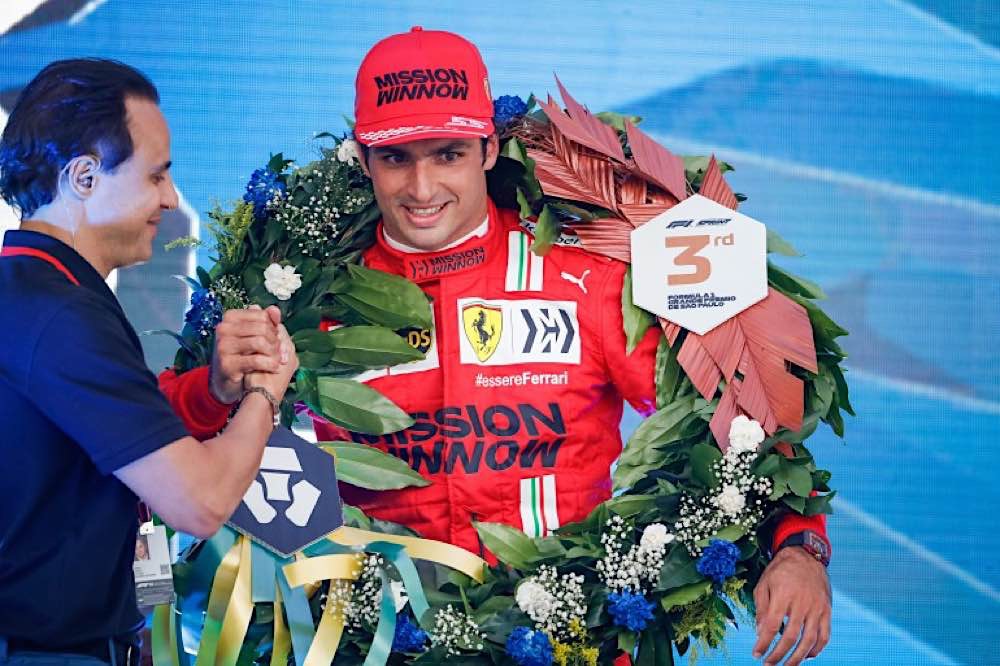 Carlos was happy with 3rd in the Sprint Qualifying.

Drivers’ styles are always interesting to watch. On a micro level, it’s interesting seeing how they have subtly different techniques, when they brake, turn in and put the power on. It’s as interesting to watch that in F1 as it is in hillclimbing or club racing. But there’s another way the drivers show their approach to a racing challenge, the human side. I would class both Charles and Carlos as intelligent and balanced, with perhaps a tiny extra bit of exuberance from the former. Verstappen is brutal, Norris impetuous, Ricciardo variable, and then we have Hamilton. Although I’ve often found his media persona to be difficult to like, there can be little doubt that on track he can sometimes effectively combine aggression and intelligence, especially in adversity. Both were present in abundance over the weekend.

Does this apply to the teams? Certainly, intelligence and balance back at Maranello produced a few tweaks to the cars to enable a good performance in Brasil, while Mercedes followed their driver and had an interesting balance of intelligence and aggression. In the chassis, they had a set up that gave excellent rear grip which, compared with RedBull, delayed the rears degrading. Also, by taking an engine penalty when they didn’t strictly need to, they arguably found themselves able to take a chance on running the engine for Hamilton a little harder than they might otherwise have done. Perhaps this helped the performance?

After some Q1 worries when Charles only reached Q2 at the last moment,  Carlos outqualified Charles for the pair to be 6th and 7th on the road. The first four places on the Qualifying Sprint Race grid were the traditional RB/MB mix with Gasly pushing the  Alpha Tauri quali special into 5th.

Sprint qualifying has been controversial. Some have said that it just serves to slightly muddle up the grid from qualifying, but otherwise serves little purpose, but Saturday’s event was full of drama. That had been caused by Hamilton’s wing having been found to have too large a DRS gap, so he was disqualified to the back, promoting Carlos and Charles to 5th and 6th.

The grid was evenly split between soft and medium tyres, with Carlos on softs and Charles mediums. It turned out that softs were the answer, as Bottas passed poleman Verstappen allowing Carlos, who passed Perez at the start, to then pressure and pass the Dutchman for second. Carlos was re-passed on lap 4, but got a point for 3rd ahead of Perez. Meanwhile, Norris had slipped ahead of Charles, which would have left him 5th on the road had it not been for an impressive recovery drive by Hamilton. Gaining five places on lap 1, he seemed to have a car in a different league to everybody else (including his team-mate), riding through the field to pass Charles on lap 20 of 24. Whilst he put Carlos under pressure, the cool head of the Spaniard kept him behind, leaving Hamilton 5th, demoted to 10th because of the engine change. Gasly, Ocon and Vettel completed the top 10.

Whilst, of the two Ferrari drivers, Carlos had the better weekend up to the race, it went wrong at the start. Charles had a good start, ending the lap in 4th, which was assisted somewhat by Carlos having a poor one. His slow start gave an opportunity for an impetuous Norris to try a fairly optimistic overtake which led to contact, and a puncture for the McLaren driver, in turn allowing Charles past. Carlos finished the lap in 5th, directly behind Charles, whilst the lead was taken by Verstappen, backed up by Perez, Bottas again had a poor start.  Carlos was disappointed, saying that he felt 5th was achievable, which demonstrates that there is a respectful rivalry between the two drivers.

If there were tales of woe at the front concerning starts, there certainly were not in 10th place. The demoted Hamilton made up 4 places on the first lap – 3 by overtaking, plus Norris – and DRS’d past Carlos and Charles on lap 3. Sadly, it almost looked as if Hamilton was running a 1700 against everybody elses’ 1600. 3rd came easily for him, on team instructions. Second was eased by a safety car following a low quality attempt at a pass by Tsunoda on Stroll which left carbon everywhere as the Alpha Tauri driver shredded the side of his own car on the Aston. Perez fought back and regained second from Hamilton, but soon afterwards the steamroller was back in front. Bottas also passed Perez after he got “cheap” new tyres under another neutralisation while bits of Stroll’s car were picked up.

Mercedes might have dropped the strategy ball a few times this year but this race wasn’t one of them. Their first stop (lap 26)  showed how quick they were on new tyres, which unsettled Red Bull. They therefore tried the undercut on lap 40, which proved too soon. On a car already heavier than the Mercedes on its tyres, they allowed Hamilton to play the waiting game as he pitted four laps later. By lap 48 he pounced on Verstappen who took a VERY wide line, both of them going off the track, out of the circuit, into the local Waitrose car park and back again. Although the move was a bit dirty, there was no investigation, though a penalty on Verstappen might have helped our boys. Hamilton bided his time, and with better tyres tried again on laps 58 and 59. A dummy into turn 1 unsettled Max’s line and the Englishman triumphed into turn 4.

The gap between the front four of Hamilton, Verstappen, Bottas and Perez and the rest was such that Perez was able to take new tyres and hence a fastest lap point without being troubled by Charles and Carlos, while these two were the last unlapped runners. Behind them, Gasly had an unusually successful race – my colleague Nigel Bland’s theory about running the RB settings is looking increasingly accurate -ahead of Ocon, Alonso and Norris who never really recovered from his failed start opportunism.

Ricciardo had initially run as high as 7th, but retired, reportedly due to a crack in the chassis causing power unit issues. This helped Ferrari take a 31.5 point lead in the battle for 3rd.

I apologise that this week’s report is not as Ferrari-centric as some of our readers may wish. But whilst I can never be accused of being a Hamilton fan, I cannot help but admire the sheer professionalism and determination of both driver and team which turned a back-of-the-grid starting position into a victory. This is a race which will be remembered for a long time.

Mattia Binotto summed up Ferrari’s performance as follows: “The team, both at the track and back in Maranello, worked very hard and with great precision, tackling every situation with the right approach. Today, every aspect of the race was managed well – strategy, tyre management and pit stops – and the drivers produced a clean and effective performance.” Team work and fastidious attention to detail seems increasingly to be the characteristics of team and drivers; let us hope both carry on into the last three races.