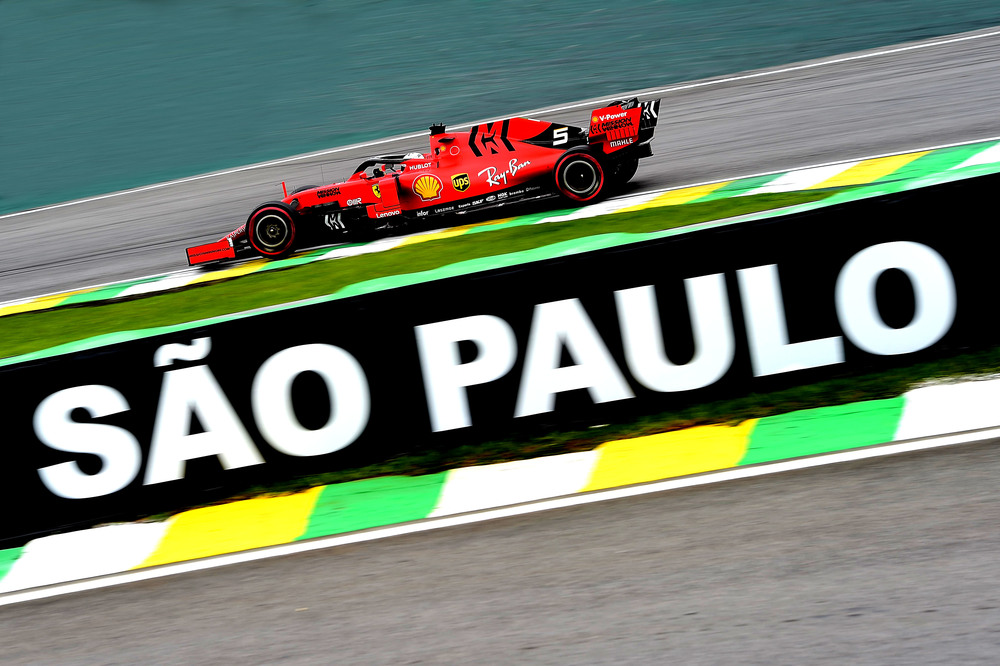 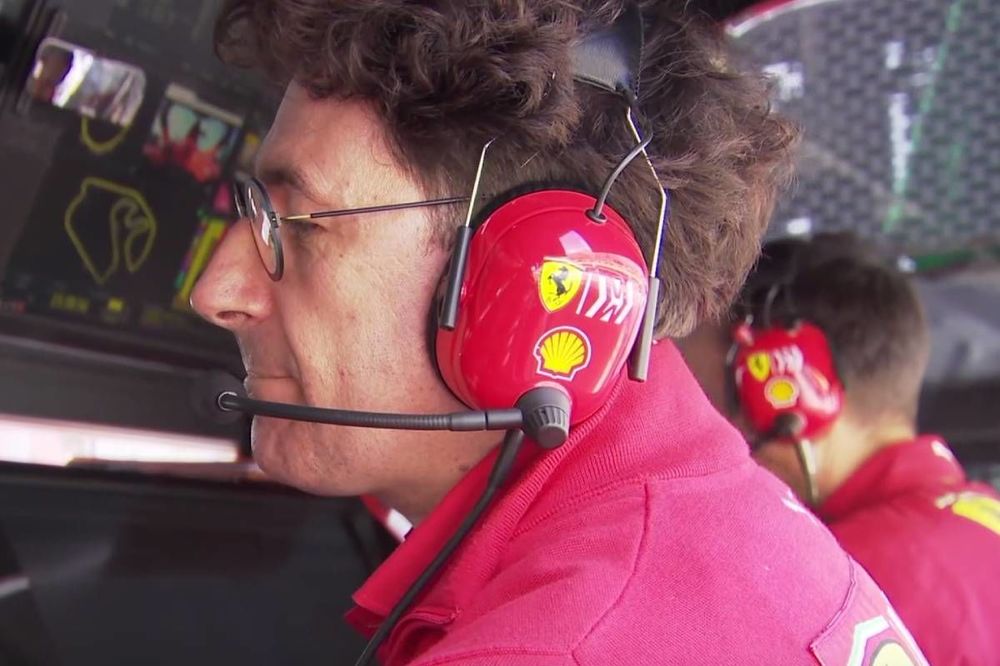 Mattia had reason to look miffed 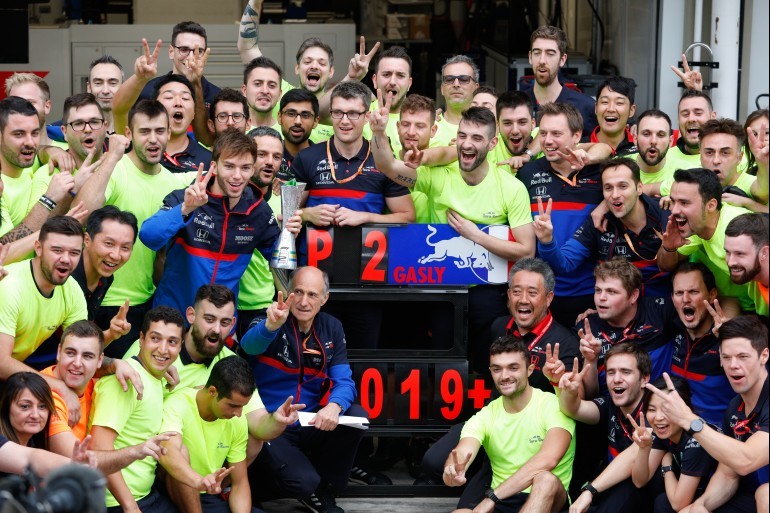 Gasly's men had much to celebrate

The 20th Grand Prix of 2019 saw Max Verstappen win his second race of the season for Red Bull Honda in quite dominant style; perhaps of more significance though were the mistakes from Sebastian Vettel and Lewis Hamilton, the two drivers who have in turn dominated the F1 World championship since 2010, winning all but one of the Championships since then and accounting for over 60% of the race wins.

In Seb’s case the mistake not only ruined his race it also ended that of his Ferrari ‘team mate’. While aggressive driving tactics can perhaps be passed off as acceptable under the 2019 rules, pulling such a manoeuvre against another team member cannot be justified. While team manager Binotto understandably did not want to apportion blame in front of the media, the post-race discussions back at Maranello would surely be pointed and further question Seb’s ‘number 1‘ status. A sabbatical year for Seb in 2020 would not surprise this writer, as his mistakes over the last 18 months are not worthy of a four-times World Champion.

Lewis as current World Champion had an overall scrappy race, culminating in a 7th place finish after being given a 5 second penalty for causing Alexander Albon to spin on the penultimate lap. Earlier he had been passed twice by Max, and while the Mercedes was not its customary pre-eminent self it did seem Lewis was a little rattled by Max’s performance in the Red Bull, perhaps explaining the rare errors first noted in their battle in Hungary. Certainly if Red Bull can maintain this form into 2020, Mercedes should have two teams challenging their supremacy next year.

The teams descended on Interlagos for the penultimate race of the season with both drivers and manufacturers championships for 2019 already decided. Also with Red Bull and Alfa confirming their driver line up for 2020 before the race weekend, and hence effectively the whole grid for next year being set (with the only exception being the 2nd Williams drive, which everyone seems to assume Nicholas Latifi will fill thanks to his father’s financing), the season’s pressures were reduced and all was set for a great race at an historic circuit where overtaking is possible.

Practice commenced in wet and overcast conditions, but by FP2 the track had dried and Ferrari pressures from their performance in Austin eased as Vettel led Leclerc at the end of the first day, although times throughout the field over the 70 second lap (2.7 miles) were very close. Unfortunately the exception was Robert Kubica who spun off before setting a time, perhaps praying his nightmare of an F1 return with Williams could end as soon as possible.

Saturday remained overcast and cool with FP3 again suggesting Ferrari would be very competitive as Leclerc and Vettel were 3rd and 4th, but now behind both Hamilton and Verstappen. The Honda engined Red Bull was performing well at a higher altitude than normal, as in Mexico, and the threat materialised in qualifying as Verstappen was fastest in each of the three qualifying segments. Gaps were inevitably small with the big three teams being split by less than half a second, headed by Vettel who thus secured a front row start.

Behind the Big Three times were incredibly close with Gasly in the Toro Rosso emphasising the Honda advantage by being 7th quickest, but nearly a second slower than the car he drove until mid-season. The remainder of the grid (excluding Williams) were within 1 second of Gasly, with notable performances from the Ferrari engined cars of Haas (8th and 10th) and Alfa (9th and 13th). For both this was a welcome return to competitiveness in the 2nd half of the year, although Haas team manager Guenther Steiner admitted to not understanding why!

Race day dawned hot and sunny so tyre wear was critical, although no one seemed to tell Max Verstappen. Starting with the soft tyre he immediately pulled a gap of over a second from the start and seemingly controlled the race until the first stops after lap 20. Seb was immediately passed by Hamilton off the grid and although able to keep within a couple of seconds for the first 10 laps tyre wear meant by the time Hamilton pitted on lap 20 3rd place appeared to be the best that Ferrari could hope for. In the meantime, Leclerc had managed to improve from 14th on the grid (10 place grid penalty as new ‘power unit’ elements fitted) to complete the top 6 on his Medium tyres, and almost within range of Albon in 5th.

Hamilton’s early stop on lap 20 was an attempt at the tyre ‘undercut’, and surprisingly it worked as he led Verstappen after his first stop, aided by Kubica being released into the path of the Red Bull, requiring evasive action from Max and resulting in a penalty from the stewards for the hapless Robert. The Mercedes lead was short lived however as Max dived past Lewis at the end of the next lap, aided by Lewis being held up legitimately by a late stopping Leclerc, Max using DRS and the Mercedes hybrid being in recharge mode as Lewis had maximised power on the previous lap to enable the undercut. The race then settled down again as the front runners managed their second set of soft tyres, and the second stops for Max, Lewis and Seb passed without incident.

Soon after their stops Bottas suffered an unusual Mercedes power failure, and in these Health and Safety conscious times retrieval of his car from trackside required a safety car. Apparently post the Bianchi incident the use of a track recovery vehicle necessitates a safety car, but surely a virtual safety car would suffice? The result was Max immediately pitted to change from the Medium tyre, as the Red Bull certainly worked better on the soft, and he somehow retained 2nd place for the restart in front of Seb. As the safety car pulled off Max again retook Lewis at the first corner while Albon also passed Seb, meaning the two Ferrari’s were 4th and 5th, both with visions of a podium finish.

For 5 laps Albon managed to hold off Seb, but Charles saw an opening at turn 1 on lap 66, and passed Seb in a late but decisive out-braking move, completed without contact. Seb now had the DRS for the run down to turn 4, which he used to draw alongside Charles on the outside; unfortunately, he then moved over to the left while still alongside, brushing Charles’ right front tyre and breaking his front suspension. Seb also suffered as his rear tyre deflated, leaving both cars at the side of the track and the Tifosi silent. While manufacturer points were not required as the team has already clinched 2ndplace, the incident effectively ensures the Ferrari drivers will end the drivers’ championship in 4th and 5th places, not acceptable in view of the pre-season optimism.

A second safety car ensued, after which Max completed his 8th career victory and a Red Bull 1-2 was denied by Lewis causing Albon to spin on the penultimate lap as he fought back from a late pit stop. A Honda 1-2 did however result as Gasly, the first ‘Division 2 car’ all weekend, scooped an unlikely but generally popular podium followed by Sainz in the Mclaren; his drive from last on the grid deserves a lot of praise, but was significantly assisted by the safety cars.

Alfa scored their best result of 2019 with Raikkonen just beating Giovinazzi to 4th place having run in the top 10 since the start. Haas suffered as the track temperatures were much higher on race day, with Magnussen salvaging 11thafter an initial incident with Ricciardo, and Grosjean 13th.

So the Brazilian GP ended with a very unusual podium, assisted greatly by an unnecessary safety car.  Sport or entertainment, this GP certainly created some interest. Where Vettel goes from here must be questioned, and a Ferrari with Ricciardo, Hulkenberg or even Alonso behind the wheel in 2020 would not be a surprise.