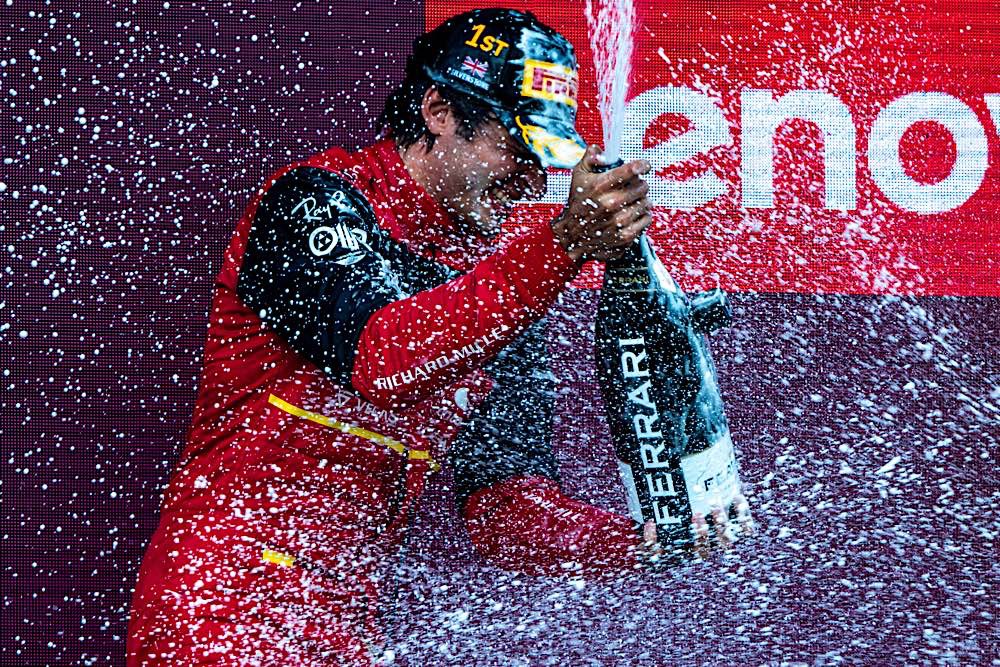 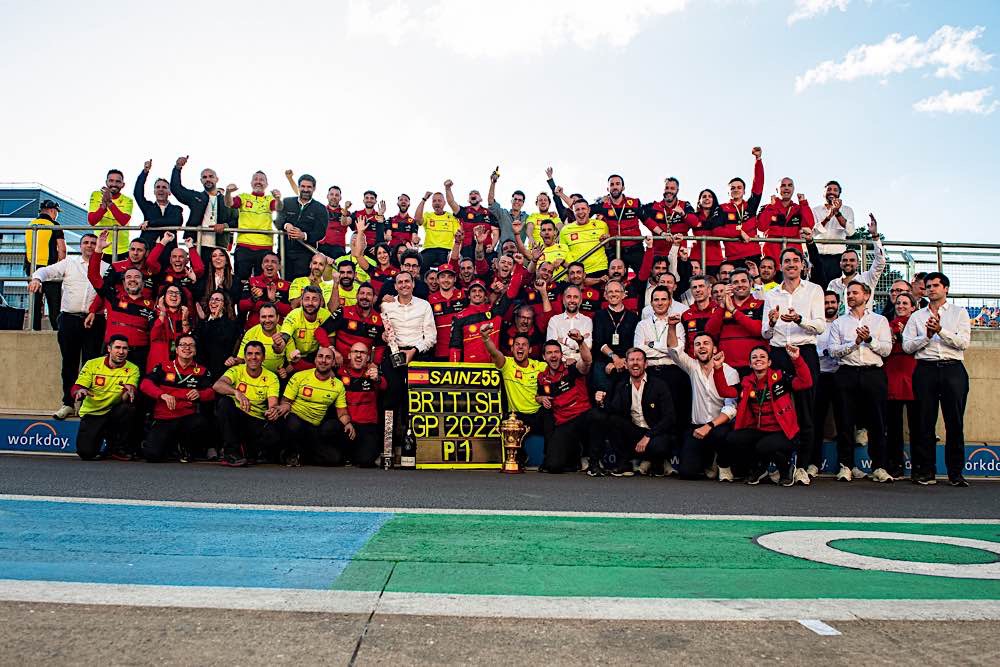 Celebratory team photograph. It took 23 attempts before they got one with Charles smiling. 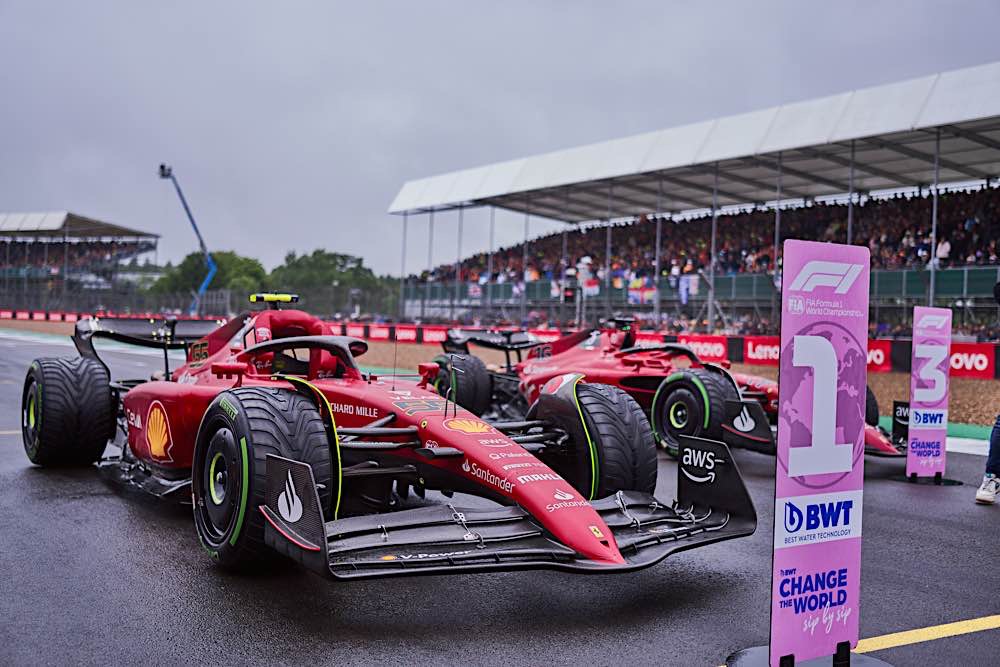 After 150 Grand Prix Carlos Sainz Junior can call himself a Grand Prix winner, and thus being part perhaps of the first father and son duo to have won F1 and World Rally events at the highest level of motorsport. While Ferrari also scored more Constructors’ points than their rivals Red Bull, many observers again questioned team tactics as Charles Leclerc was clearly the fastest Ferrari driver on the day, yet he only finished 4th as a result of questionable team decisions during the safety car period.

Ferrari entered the weekend after a positive result last time out in Canada; both cars had finished, a significant positive after Baku, while many believed Sainz and Leclerc had the fastest car. This trend continued at Silverstone with Sainz heading the Friday times with Charles in 5th, separated by a resurgent Mercedes of Hamilton, Norris as normal outperforming his Mclaren and the inevitable Verstappen. Disappointingly the remaining Ferrari engine cars were all in the bottom half of the times, perhaps preserving their equipment for the remainder of the weekend?

Third practise on Saturday morning remained dry, and the potential of the Red Bulls was highlighted by finishing 1stand 2nd, with Max over 0.4s clear of Charles; the top three teams were well clear of the rest, perhaps suggesting that while the new rules have produced better racing the possibility of a winner on merit from outside Red Bull, Ferrari and Mercedes remains remote.

Thankfully the weather can add another dimension to the results and rain, a frequent visitor to Silverstone, arrived as qualifying commenced. Thankfully it wasn’t torrential, so intermediate tyres could cope and being on the track at the right time was crucial. As a result the grid was determined by who was on track for the last two minutes of qualifying, and more importantly delivered a clean lap, and Sainz duly delivered after being only 6th in FP3. He perhaps could thank his team mate for his first pole position, as a quick spin by Leclerc on his final lap at Chapel meant Charles only lined up 4th, but perhaps more importantly it delayed Verstappen sufficiently so he could only finish 2nd. Perez, Hamilton and Norris completed the top 6, with Russell out of position in 8th.

Guanyu Zhou was perhaps the star performer, hustling his Alfa to 9th after being quickest earlier in the final session, and beating renowned qualifier Bottas. The other two Ferrari engine cars were 17th  (Magnussen) and 19th(Schumacher), the latter a disappointment for Haas after being 9th quickest in FP3.

Tyres as ever were a major talking point before the race, with Sainz and Leclerc starting on the medium, while Red Bull opted for the soft in an attempt to lead from the off. Russell was the only driver to choose the hard tyre for his out of position Mercedes, and his resulting slow launch led to a pincer movement which resulted in Zhou’s Alfa colliding with the Mercedes and being launched upside down into the Abbey Curve debris fencing; its energy led it into rolling over the barriers only being stopped by the spectator debris fencing. Amazingly after a long extraction period Zhou was released, totally uninjured, while Alex Albon was taken to Coventry hospital after hitting the pit wall hard in the incident, but was released later in the day. While Zhou’s escape is to be commended, largely as a result of the halo, the consequences if the car had caught fire need to be considered, as photos show he was effectively trapped in the car by the debris fencing.

The accident also saved F1 and Silverstone from a potentially very serious incident as a few environmental protestors had managed to evade security and were sat on the track on the Wellington straight; thankfully they were removed before any incident with a F1 car occurred, but it was only by chance…

A 17 car GP restarted after an hour’s delay and Red Bull had rethought their tactics and put Verstappen on the Mediums as he had easily beaten Sainz into turn 1 at the initial start. Second time around Sainz aggressively defended into Abbey and managed to head off Verstappen, while Leclerc was fighting for 3rd with Perez, and managed to lose his front wing endplate in the skirmish at Village. While his Ferrari continued, and indeed was soon quicker than Sainz, Perez had to pit with wing damage.

For the first few laps Sainz could contain the Verstappen charge, but under continuous pressure he drifted wide at Beckets allowing the “World Champion” through; a lap later the Red Bull junior team drivers collided at Village, the apparently innocuous skirmish leading to debris on the circuit, with the front endplate of Gasly’s  car managing to lodge itself under Verstappen’s who now was driving an uncompetitive Alpha Bull; thankfully for the Tifosi this was not one of Newey’s best creations and he eventually finished 7th, after significant wingeing to his team.

With Verstappen out of the lead battle a Scuderia 1-2 led by Sainz continued until their stops for new tyres, after which Leclerc was clearly the faster and with Hamilton’s Mercedes gradually catching them a team order for Sainz to move aside was given and Leclerc was released; that should have been the race result but on lap 40 Ocon’s Renault (sorry, “Alpine”) stopped on the old pit straight and the race director thought a safety car, and thus more confusion, was needed. Unfortunately for Leclerc fans team management thought as he was on newer tyres Sainz should pit and cover off Hamilton, which left at the restart Leclerc on used hard tyres against Sainz, Hamilton and a very lucky Perez on softs.

Predictably Sainz immediately retook the lead, and although fighting valiantly Leclerc slumped to a very disappointed 4th, despite a very impressive repass of Hamilton around the outside of Copse. Thus a very eventful GP ended with Sainz taking his first win from Perez, and Ferrari taking 37 Constructor Championship points; they remain 49 points behind Red Bull, while Leclerc is now 43 points behind Verstappen in the drivers’ championship.

Behind the top four Alonso finished 5th, benefitting from Mclaren also making strategic errors with the safety car by not pitting Norris straight away and thus coming 6th, while Schumacher (his first points), Vettel and Magnusson completed the top 10. Bottas, the only other car with Ferrari power had to retire, disappointingly with gearbox issues.