GRAND PRIX: Britain: So Close, but no Cigar 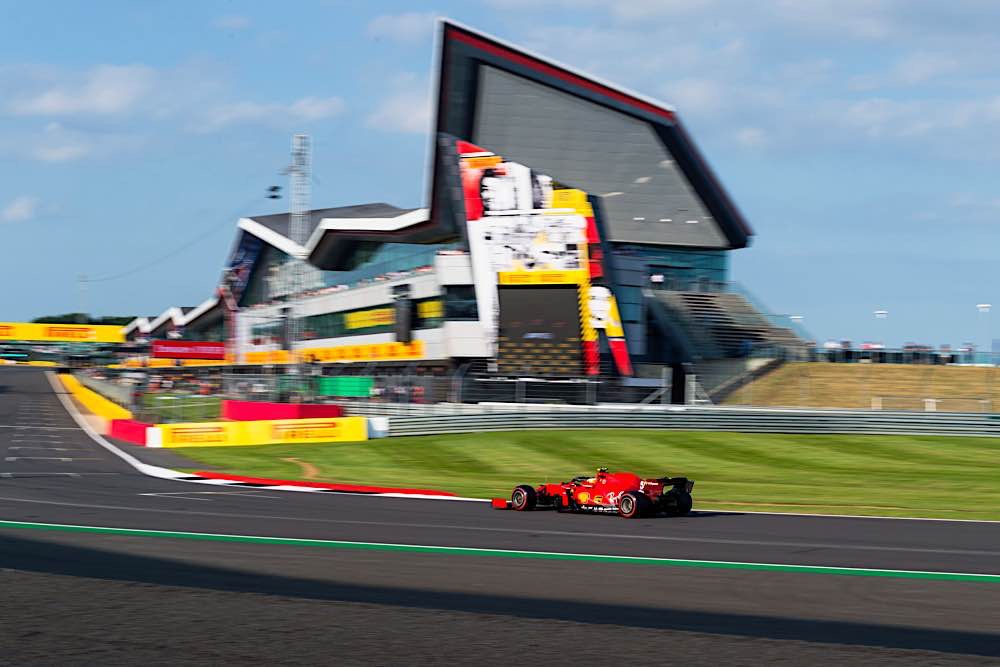 Carlos by the oft-admired Silverstone Wing. 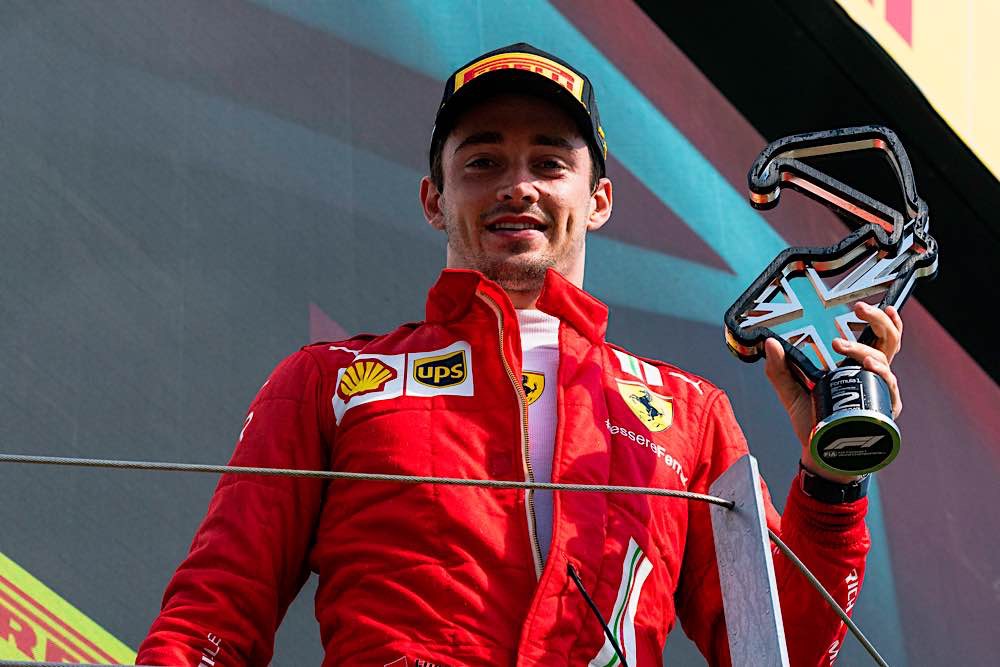 It seems strange to regard 2nd as a disappointment. 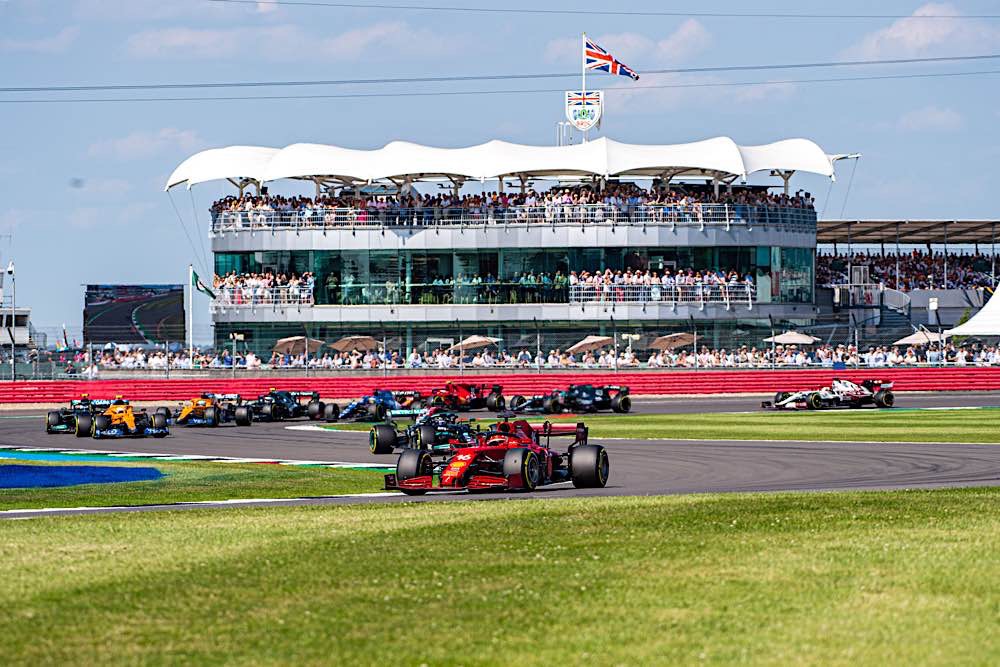 Charles led for the majority of the race.

Yippee! A new format to report on rather than the drudge of practice, another practice, more practice, by which time the winner on Sunday can be more or less predicted.

The different race format was however a bit convoluted to understand. Why do they make it so complicated? There was a normal practise session on the Friday followed by the usual-format Qualifying which set the grid for the Sprint race on the Saturday. Except we weren’t allowed to call it a ‘race’, it had to be ‘Sprint Qualifying’. Really? Then a fairly useless additional practice session before the race on Sunday, with the grid set by the result of the Sprint race. Geddit?

How about one practice on Sat morning, qualifying on Sat afternoon, a 15-min warm-up on Sunday morning and then the race? Nice and simple, and a lot cheaper for the teams. But it would need Bernie to impose that and those days of autocracy are long gone.

Max and Red Bull continued their winning form into P1, being an astonishing 0.7secs ahead of Lando Norris and Hamilton, with Leclerc popping up nicely in fourth in a Ferrari that was not expected to do well on this swoopy and high-speed circuit. But by the time of the late-afternoon Q. session the tables were turned, with Hamilton a tenth ahead of Verstappen, in turn a tenth ahead of Bottas. In fourth it was again Leclerc who produced an excellent performance, albeit seven-tenths behind the pole sitter. Team mate Carlos Sainz languished in 9th, behind the sensation of the session – George Russell who popped his Williams into 8th with a very smooth and polished lap. His car is obviously getting better but his driving is so mature that if Mercedes do not take him in ’22 then another front-running team maybe will.

The second practice session, on Saturday morning, was a bit of a waste of time as it counted for nothing. Max topped the timesheet but some 3 seconds slower than he had gone in qualifying, but it was good to see Leclerc and Sainz in 2nd and 3rdwhich was a good indication of their potential pace in the race. Hamilton took it easy and was down in 8th with Bottas one place behind.

The Sprint race followed late afternoon on a blisteringly hot track with 48C surface temperature. Hamilton had pole for this one and as it was a 17-lap race with no pit stops he elected to use medium tyres, like most of the rest of the field. Bottas, however, was put on softs in the hope that he would out-drag Max at the start and play the cork so that Hamilton could disappear at the front.

It went a bit wrong, however, as Hamilton fluffed his start and Max shot into the narrowest of leads, with the Merc trying every which way to get past. There was some pronounced weaving going on but the RB gradually eased away from the two Mercs. In 4th it was good to see Leclerc holding on strongly but not able to trouble the trio ahead, whilst poor Sainz bashed wheels with Russell and dropped back to 18th place, not ideal in such a short race, but he managed to get back to 11th by the end. The highlight had to be Alonso who shot from 11th on the grid to 5th with some very decisive moves whilst others were being a bit too circumspect about their front wings – bearing in mind this race would set the grid for the Sunday event. As his soft tyres went off he defended mightily, with some adventurous weaving, but still finished 7th.

And that’s the way it stayed to the end of the 17-lapper. Was it worth it? Well, not really, as hardly anyone made any effort. With only 3 points on offer it made the main race (with 25 points) much more valuable so there was never much incentive to go racing properly. Now, had there also been 25 points up for the sprint race….

So for the main race it was Verstappen on pole ahead of the two Merc with Leclerc handily in fourth. Max again got slightly the better start but Hamilton was severely crowding him on that first lap, trying desperately to get ahead to prevent the RB from again edging away at the front. Then came the infamous incident at Copse, with two hard racers refusing to give way, and at 180mph it was inevitable that the one on the outside would fly into the barriers. It was a very hard hit but, once again, it showed the inherent strength of a modern F1 car. In the melee that followed Leclerc got by Hamilton for the lead, having passed Bottas at the start, but the race was quickly red-flagged to clear up the considerable damage.

Whilst the Red Bull and Mercedes teams hurled abuse at each other over whose fault the accident was it became clear that Leclerc would be on pole for the new grid, an unexpected bonus, with Sainz up in 8th. Leclerc pulled cleanly away at the restart to narrowly hold the lead from Hamilton and Bottas, and things looked even better for Ferrari when it was announced that Hamilton had been given a 10-second penalty for causing the Verstappen accident. I saw it more as a racing incident, albeit a very dangerous one, with Max chopping in front of Hamilton and the latter trying to force his rival wide. They were both to blame.

Leclerc held onto his narrow advantage with Hamilton sometimes in DRS range and sometimes outside, and it all became heart stopping when the Ferrari developed slight engine issues that were frequently broadcast over the TV feed. He held on and seemed safe when Hamilton took his 10-second penalty and dropped to fourth. But inexorably the extra speed of the Merc took effect and with some exceptional driving Hamilton swept by the Ferrari with just three laps to go. It was a podium and a second place for Leclerc what a disappointment for the tifosi, unlike the euphoria that greeted the Hamilton victory on his so-called home circuit [thought that was Monaco? – Ed]. Despite suffering a slow pit stop Sainz managed to finish 6th, so at least both Ferraris were in the points.

It’s certainly spiced things up in the Hamilton-Verstappen battle at the front but that silly incident on lap 1 (of 52!) deprived us of what might have been an epic tussle at the front between the two best drivers on the grid today. I can’t help wondering whether we are beginning to see the changing of the guard, like when Schuey began to pressure Senna