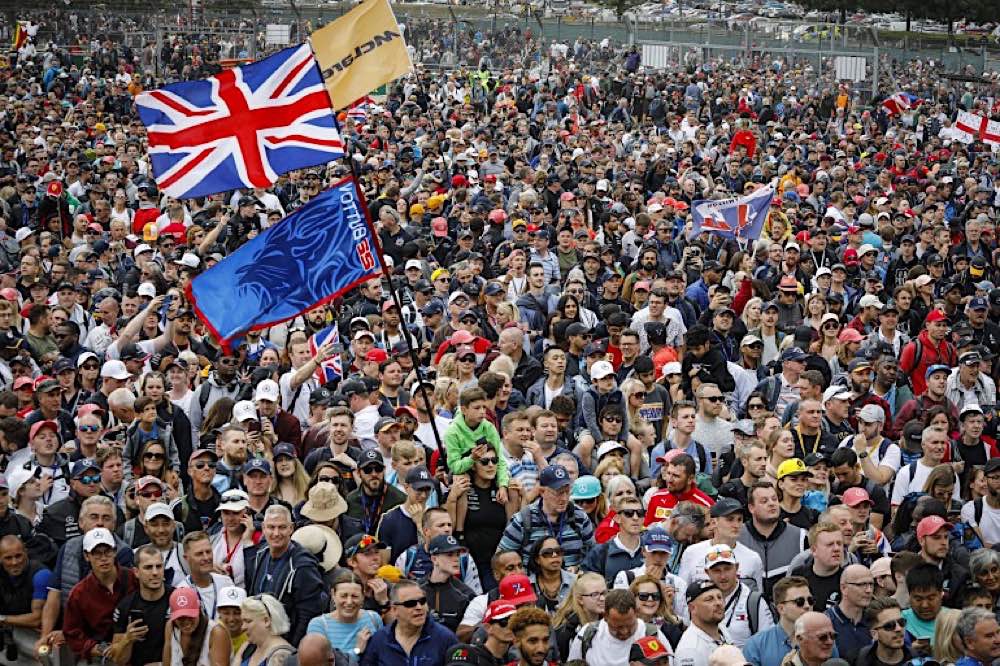 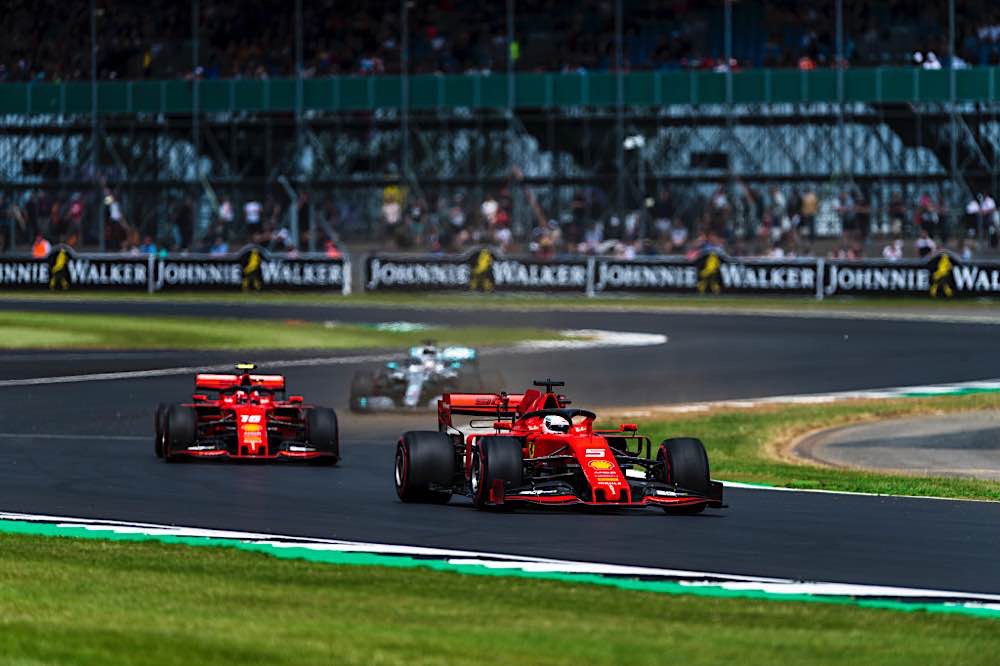 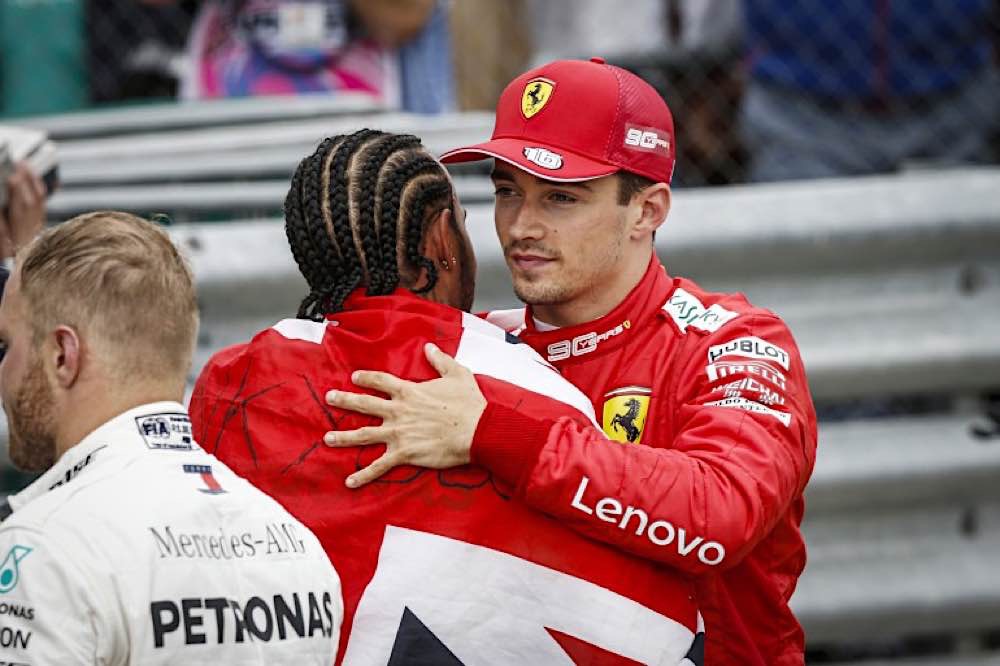 We’re lucky to have a wide range of reporters on this website. Last time my old friend Winston was concerned he had a bit too much fizz in the Paddock Club in Austria. This time, my even older friend Nigel was worried he had a bit too much tea in the Silverstone Club. It’s a question of the right man in the right place. Much, sadly, like our dear friends at Mercedes, who seem to currently have a stable team of the right men at the top of their game with messrs Cowell (engine), Allison (technical) and Vowles (strategy) and – pass me the painkiller- Hamilton (driver).

The first hint of what was going to happen in the race came in P2. Traditionally, the first half is spent in high speed runs and the second at race pace. It could have been a bit of gamesmanship but Mercedes were in a class of their own, well ahead of the rest of the field. So much so that Hamilton, with knowledge of the new track surface, (or it could have been the strategists) hatched a plan for Sunday.

When qualifying started in earnest we did have hopes for Charles, and this held through to near the end of Q3 where for a while he headed the timesheets. However, Bottas did a flawless lap while Hamilton had a twitch at Brooklands, sufficient to put him second and unable to recover. Charles’ lap was good enough for third, while Seb languished in 6th, and sounded disappointed in the interviews. It can’t have helped that not only was Verstappen, bizarrely tipped at one point as Seb’s successor, ahead, but so too was Gasly. Whilst he now had the same aero as Max at Silverstone, the proximity of contract negotiations must have played a part in Gasly’s unexpected renaissance. Nonetheless, the RedBull Hondas do now seem to be a concern to us Tifosi.  Ricciardo then edged out Norris by 4 hundredths. The McLaren man had apparently spoilt his reputation a bit on Thursday when, during the Pirelli Hot Laps session, he put a McLaren road car into the gravel. Should have been in a 488 then.

Elsewhere, spare a thought for Haas. Their upgrade for Silverstone was to run Grosjean in Melbourne spec. He duly outqualified Kev in the latest spec car. There then came news that their title sponsor was to be renamed “Lightning Volt”, which sounds to me more like a brush painted 13 year old Prius at Curborough than an F1 sponsor, but it coincided with losing William Storey as sponsor CEO, which at least makes the paddock a bit tidier.

When the lights went out, the two Mercedes had a battle, with Bottas firmly shutting the door. Seb shot past Gasly who was also challenged by Norris. The most stupidly intense battle, since it ended with both cars retiring due to self inflicted damage, was the two Haas’s who collided at the start of Wellington Straight. Netflix will surely be moving the “Drive to Survive” Haas fly-on-the-wall to a comedy slot next season.

Back with the grown-ups, Hamilton hassled Bottas whilst Charles, Max and Seb kept watch behind. After a few laps, Hamilton made a few attempts at passing, which was repulsed, but it was certainly good to watch. Verstappen pushed Charles, and whilst nothing actually happened, it looked like it might.  Why, even Gasly had a go against Seb. No, I didn’t believe it either. Unfortunately, and as is usual, the real overtaking happened in the pits. A marginally better pitstop for Verstappen got him in front of Charles, who promptly got the place back on the road. Seb, meanwhile, moved up to 3rd.

Ferrari had started on softs and Mercedes on mediums. Whilst both were acceptable, the mediums lasted a bit longer. Bottas pitted 3 laps after Charles, Hamilton 7 laps later, confirming his lesser wear rate on the tyres. Whether influenced or not by Gasly and Hulkenberg going onto hards, Hamilton, who we are led to believe always wanted to run a one-stop, followed the same route giving him a chance of getting to the end with only one change. Charles and Seb would need 2, as would Bottas having already re-shod with mediums. Not only did he have the advantage of a single stop, but it was a very “cheap” one as Giovanazzi went off just before, and a safety car was deployed as Hamilton took his stop. As a result, Hamilton kept his lead. Seb also chose hards, and moved up to third. Although it had been but 7 laps since the previous change, Charles and Verstappen also took the safety car as a chance to pit for hards with less time loss.

Something unusual happened on lap 25, as Charles and Max battled away, at times side by side. Max went into the run off area, but it was regarded by the powers as “racing”. Now that IS unusual. It would be nice if occasionally Ferrari got the benefit of such judgements, but the racer in me applauds the stewards for their common sense.

By lap 36, Seb was still third but under pressure from Verstappen who passed into Stowe. Seb fought for the place into Vale, but was closed off by Verstappen. As he switched to the other side of the track, he caught the Red Bull, resulting in a wing damaged enough to need a change. This of course dropped Seb right down and he finished a disappointing lapped 15th, down to 16th after a 10 second penalty for “racing”. Sorry, “causing a collision”. Verstappen also suffered a little, dropping to 5th as Charles and Gasly moved up to 3rd and 4th. A subsequent tyre change to softs for Bottas gave no loss of position.

Bottas set a fastest lap on his new softs just before the end of the race. As if to underline the dominance Mercedes and Hamilton had at the British Grand Prix, Hamilton then bettered it on 25 lap old hards on the last lap with full engine mode. He can’t need the extra point, he’s doing it because he enjoys it. Bottas’s second must have seemed almost like a major defeat for him, while Charles quite clearly accepted that third was a major achievement on this day when Not Mercedes meant Not Competitive. Gasly’s 4th was completely against the run of his recent performances, whilst team-mate Verstappen must have felt aggrieved at “only” 5th. As Winston said in Austria, the Grey now Orange  Empire are fighting back, this time with Sainz in 6th, both helped by the safety car and starting on the mediums so his first stint could be long, which again enabled a 1 stop strategy. Raikkonen, conversely, suffered, having a change to hards just before the safety car. He was 8th, behind Ricciardo, and ahead of Kyvat and Hulkenberg.

But finally…with very little good news from Silverstone for Ferrari fans, there was at least some good news for British Grand Prix fans with a renewal (after 2 years’ negotiation) of the contract, and at a supposedly realistic price. Silverstone also sorted out a couple of issues – the track, which, after unfit-for-purpose resurfacing last year, seemed to behave, and the traffic in and out was described as “better than a national meeting”. So perhaps things could be worse.