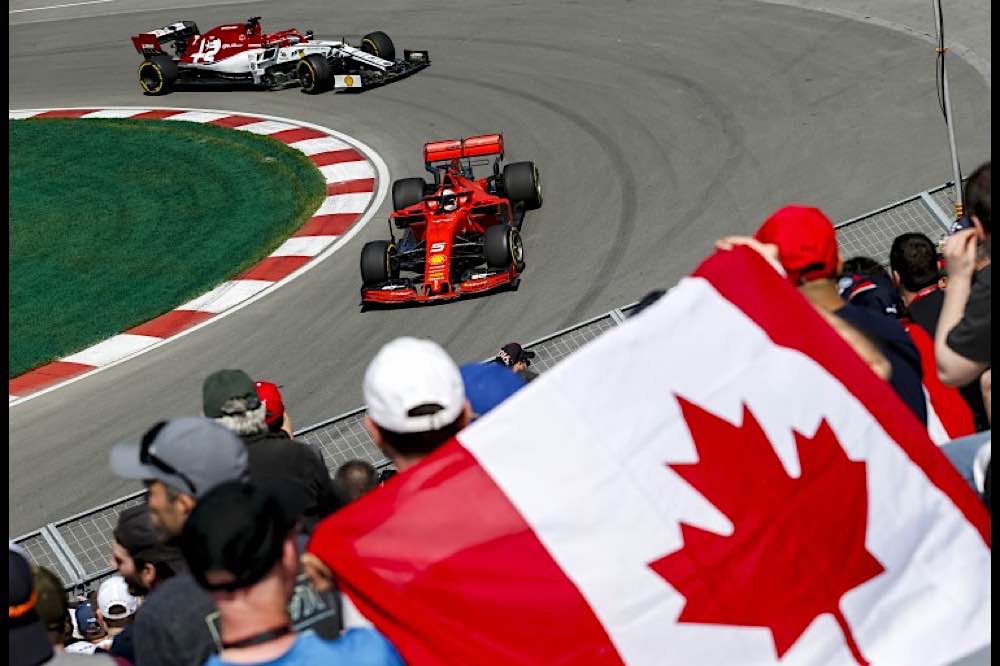 Canada usually throws up something unexpected 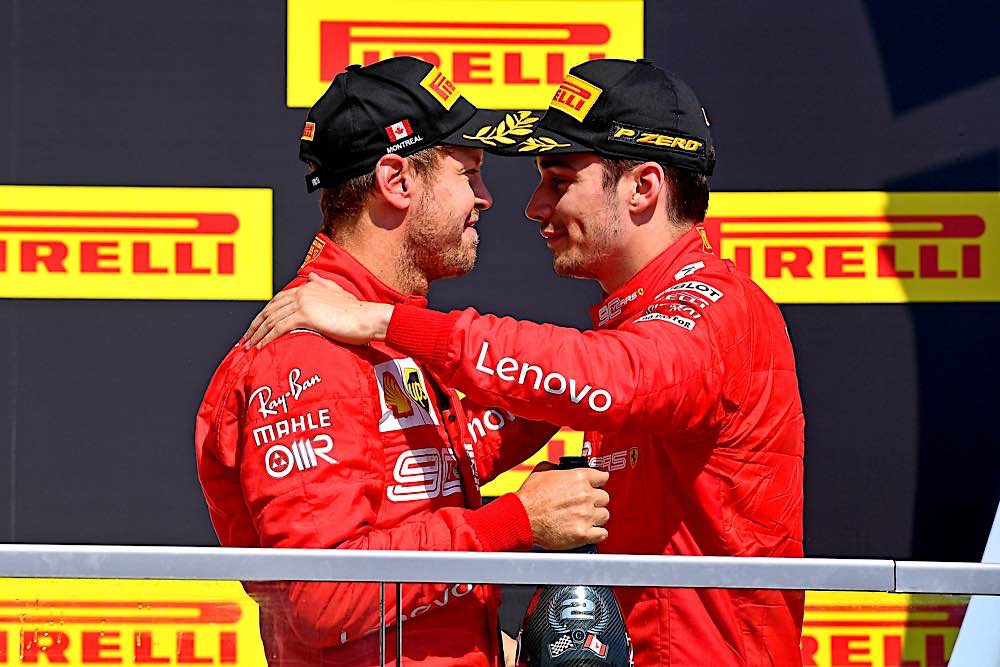 Emotions on the podium best described as "mixed" 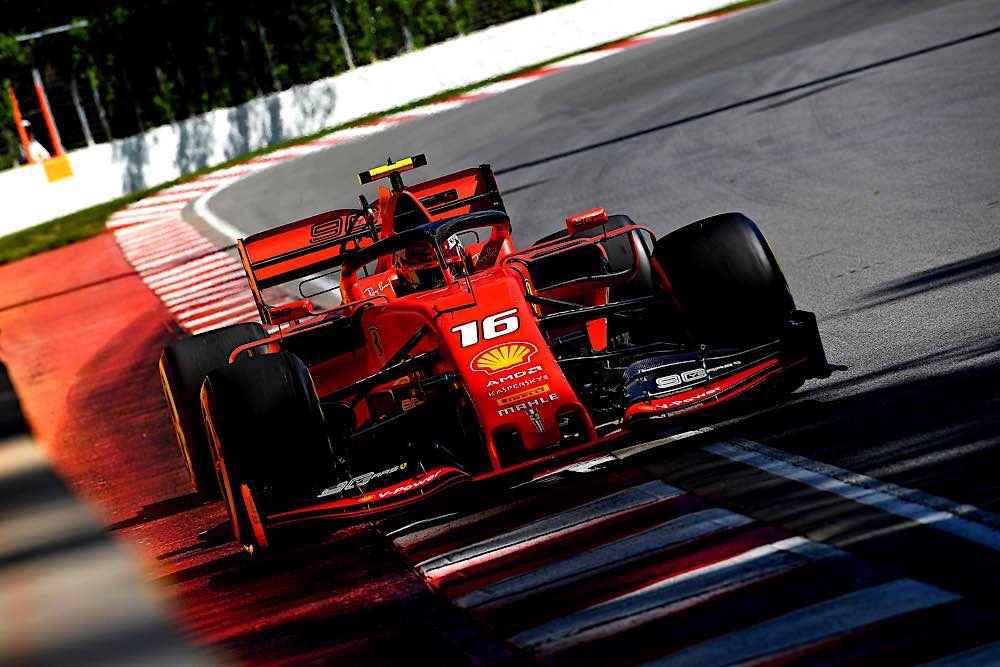 Charles makes full use of the track width

The Canadian Grand Prix highlighted yet again that the fastest driver to complete a race is not necessarily the winner.

Iit has happened before and no doubt will happen again that the winner on the road is penalised, and so 2nd over the line wins. Unfortunately for the Scuderia, this meant that the Canadian GP weekend that promised so much left the team celebrating ‘only’ a 2-3 finish (the best result of the season), but left a very disappointed Sebastian Vettel questioning stewards’ decisions and, perhaps of more concern, his motivation within motorsport.

So how did the race weekend unravel? First practice concluded with the standard 2019 season order repeated, as Mercedes led comfortably from Charles Leclerc, with Seb 5th fastest behind Max Verstappen. Thankfully matters improved in the afternoon where the Ferrari performance was fully unleashed, with Charles ending the day just quickest from Seb. So pre-race expectations of the circuit suiting the SF90, with its long back straight and no seriously quick corners led to the team approaching qualifying day in an optimistic mood, particularly as Hamilton had lost most of 2nd practice after hitting the wall.

Qualifying day was hot, further helping the tyre situation such that Ferrari dominated final practise with Seb’s advantage nearly 0.5 seconds over the quickest Mercedes, so confidence was high for the crucial 3 part final qualifying session; thankfully both cars passed through to the final session without much drama, but after the first runs Hamilton produced one of his banker laps to edge Seb, with Charles a distant 3rd. With the engines fully turned up Seb produced perhaps his lap of the season at the end of the session, to annex pole by over 0.2 seconds, helped by the straight line speed advantage of the Ferrari of 207.1mph, compared to the Mercedes at 203.6. As Racing Point achieved 205.6 with the customer engine, extra downforce appeared to be being run on the factory Mercedes.

So race day was anticipated to be a straight battle between Ferrari, with 1st and 3rd places on the grid and Mercedes with 2nd and 6th. The first stint proved uneventful with Seb making a clean start and maintaining a gap of around 2 seconds to Hamilton. It was only after the pit stop, and a change to the hard tyre that the Ferrari advantage appeared to reduce as the gap, initially 5 seconds after the pit stops, was gradually reduced to the point that Hamilton was almost within the 1 second DRS range. The relentless pressure finally forced Seb into a small error on lap 48 as, perhaps distracted by a soon-to-be-lapped Toro Rosso, he lost the rear on turn-in to a right-left chicane, short-cut the corner and regained the track just as Hamilton was appearing on his right hand side. Being a racer, and in true ‘Schumacher’ style he ensured the gap was not quite wide enough for a Mercedes to pass and resumed the race in the lead, and despite continued pressure from Lewis continued to lead the race until the chequered flag. Being 2019 though the Stewards decided by lap 57 that Seb had ‘rejoined the track in an unsafe manner and forced car 44 (Lewis) off track. Car 44 had to take evasive action to avoid a collision’. As this action was in conflict with the FIA’s Sporting Code, a 5 second penalty was applied, and thus Ferrari did not win their first Grand Prix of 2019.

The rights and wrongs of the decision were debated at length in the media, with the consensus suggesting that Seb had been robbed of a clear victory. Others disagreed, and being objective it was unfortunate that Seb made the error that allowed all the debate, as it seemed clear that although Lewis could get very close it was unlikely he could overtake without significant risk, and would he have been so desperate to lose 18 points? Of more concern to this writer was Seb’s post-race comments, which suggest he is not enjoying his racing at present, particularly as a 6th world title for Lewis appears probable; will Seb thus retire at season end? – it would not surprise me.

As for Leclerc, he drove a very controlled race and was only 6 seconds behind Seb when the flag fell, his best result since Bahrain. Ferrari subsequently admitted that they had not informed him of Seb’s penalty (perhaps fearing he could have deprived Seb of 2nd place), agreeing this was an error. Perhaps, as questioned at Monaco, team management is not functioning at 100%?

Ferrari return to Europe in 2nd place in the Constructors’ Championship, a huge 123 points behind Mercedes, while Seb is in 3rd place in the drivers’ standings, 62 behind Lewis. The first third of the season is now complete, so there remains plenty of races to close the gaps, but these are largely on circuits which to date have not favoured the characteristics of the Ferrari chassis.

While the Ferrari team achieved their best results of the season, the same could not be said for their ‘satellite teams’. Sauber (sorry – “Alfa Romeo”) seemed to struggle all weekend, with Giovinazzi and Raikkonen only qualifying 13th and 17th respectively and finishing 13th and 15th, despite having the 4th quickest car in a straight line. Raikkonen’s performance, in his 301stGP was particularly underwhelming, suggesting that the Scuderia promoting Charles this year was the right move.

At Dallara (sorry –“Haas”) matters were a little better in qualifying until Magnussen made one of his frequent errors, which led to him starting from the back in a rebuilt car and his team mate Grosjean being resigned to starting 15th as his qualifying lap was annulled by Magnussen’s accident! The race showed no improvement with 14th and 17th place finishes…at least all the Ferrari engines were reliable.

Finally, in order to write this report Sky TV coverage was purchased for the day; while it’s good to see live coverage, why we need at least 8 presenters at the track, when 20 years ago just two (Murray Walker and Martin Brundle) covered largely the same material is difficult to explain. Job creation in F1/Media springs to mind.