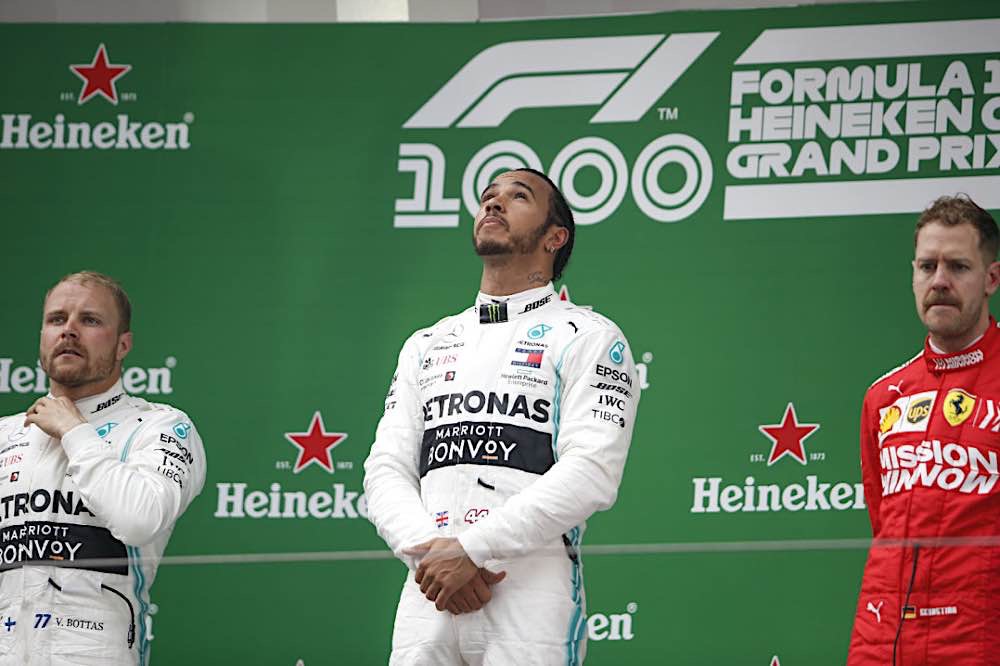 Whilst Hamilton seems to be thanking the heavens, Bottas and Seb look distinctly grumpy 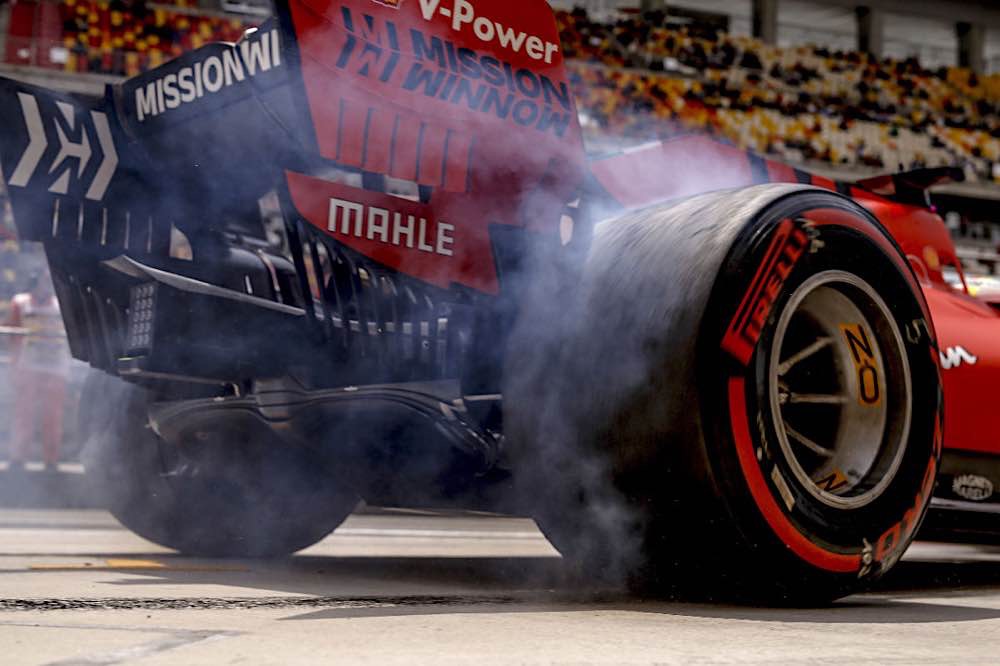 Why does a tyre lighting up look so nostalgic? 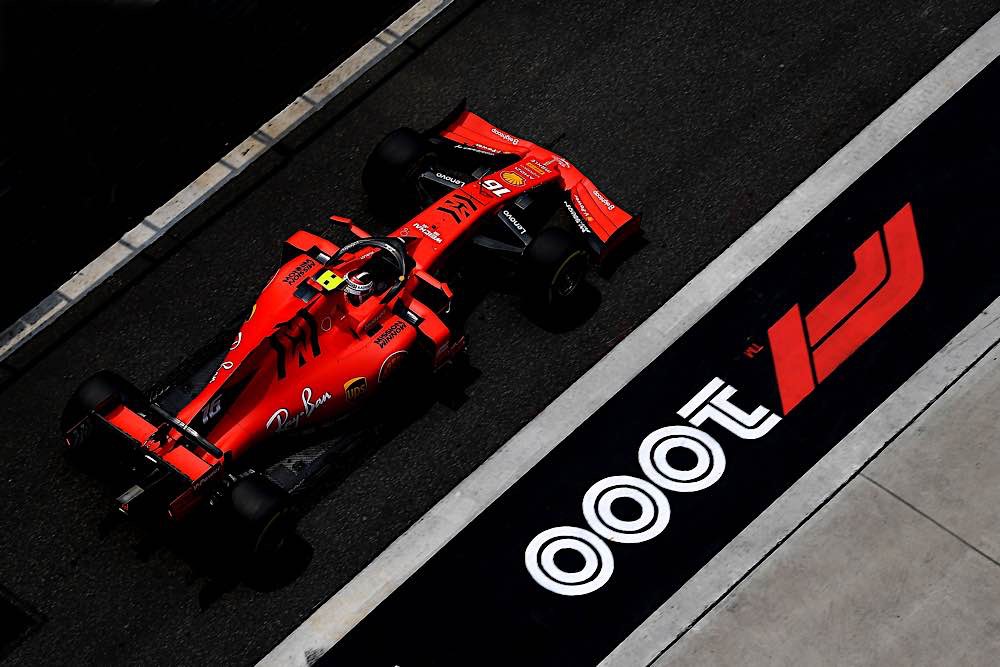 Lewis Hamilton won F1’s 1000th race as Mercedes made it three 1-2 finishes to start the season. The Brit notched up his 75th race victory and took the lead in the championship over his teammate Valtteri Bottas by six points.

Again, Ferrari had a weekend to forget. Not only could they not get a car on the front row in qualifying, team orders came in to play for the first time and did not work. Then to top it all off, Sebastian Vettel was denied an extra point for fastest lap right at the death as Pierre Gasly notched up a quick lap in his Red Bull.

The controversy at Ferrari was inevitable at some point this season but it is a bad sign that it came after only the third race of the season. Charles Leclerc had qualified behind Sebastian Vettel, but had a great start and moved up to 3rd. Once the two Mercedes were ahead by some way it took only ten laps for questions to be asked of the Ferrari garage about letting Vettel go through. They made the move and it didn’t work. Not only did Vettel not get anywhere near the Silver Arrows out in front, they were being caught by Max Verstappen with the Dutchman eventually finishing in front of Leclerc. The young Monégasque went from a podium place to 5th. It is fair to say he is not a happy boy.

It was Bottas who qualified fastest on Saturday and started on pole. He beat out his teammate by only 0.023 seconds. Vettel beat out Leclerc by even less but was still three tenths of a second off the Mercedes. Elsewhere Gasly was much improved, finishing 6th and gaining the extra point for fastest lap. Sergio Perez recovered well from a dodgy qualifying to finish in the points but it was another week to forget for McLaren as Lando Norris retired from the race and Carlos Sainz finished 14th. Both however were hard done by thanks to the return of ‘The Torpedo’, Daniil Kvyat who collided with both McLarens during the race.

On Sunday there was drama right from the start. Actually it was before the start! Both Robert Kubica and Max Verstappen spun on the formation lap. No, it was not raining. Very odd. When the lights went out at the start of the race, both of the top two team drivers who had been outqualified by a teammate, moved up a space.

Everything seemed great early on as Bottas could have been caught but Ferrari just weren’t able to decide what to do with their drivers and in the end made a move that didn’t work. Leclerc had a decent gap between himself and Vettel and told team radio he felt he was starting to pull away, but the decision had been made to switch to give Vettel a run at Bottas. It was very early on in the race but a question may have to be asked if Leclerc deserved to have his place given back to him. Maybe this would have been the case if they would have not let Verstappen split the pair. It will be another talking point back at Maranello for sure.

Meanwhile at the front, Hamiton was having a lovely day in 1st place and managed to reach his 4000th lap leading a GP, a feat only matched by Michael Schumacher.

If Ferrari were hoping for drama, they would have hoped it would have been with the Mercedes pair, but instead they had a torrid time dealing with Verstappen’s Red Bull. When Vettel did go in to the pits, the first of the Ferrari drivers to do so, he came out just in front of Max leading to the pair having a tussle. Verstappen cut down the inside of Seb through the hairpin but the German was able to recover and get back in front by the last corner. Although the move didn’t stick, it was impressive from Verstappen who not only avoided bumping in to Vettel in the same spot like he did last year, he also set the fastest lap in the process.

There may have been some hope for Leclerc who was doing well having only stopped once during the race. He was holding off Bottas but it was just too early in the race to carry on with the tyres he had. The thought of carrying on was thrown out of the window and he had to settle for 5th.

I think the season so far for Ferrari can be summed up by a line from Martin Brundle about halfway through the race:

“We need to stop talking about Ferrari this and Ferrari that and all their power because they aren’t doing it. Mercedes are dominating”.

After the promise of a faster car, here we are once again watching Mercedes dominate and Ferrari causing problems for themselves. Roll on Baku.