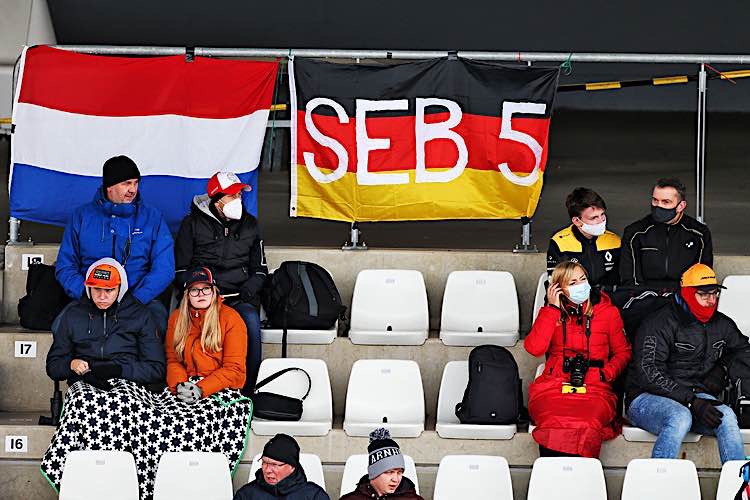 Even under social distancing, there's support for Seb 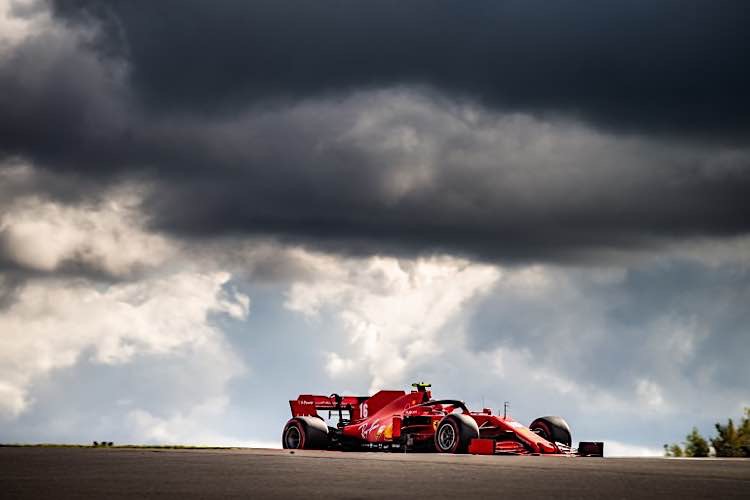 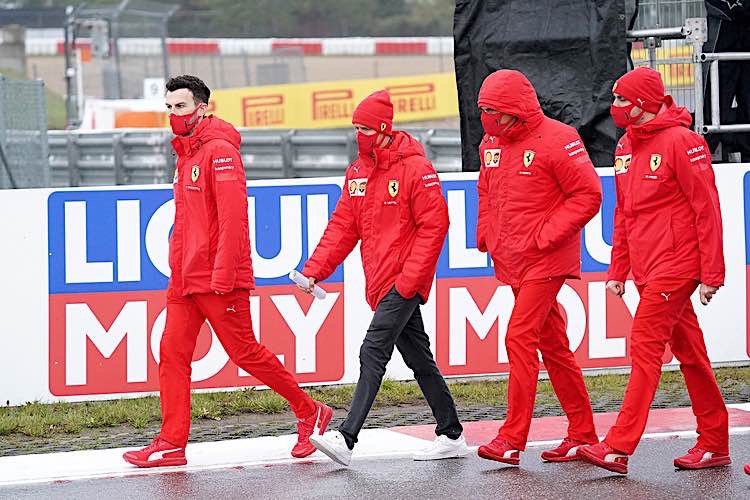 Grab your coat and grab your hat

When I watched some old friends in a single seater race at Silverstone on one of the many live TV feeds that have sprung up this year, and I saw the lead change 3 times in the last lap, I thought “why can’t F1 have exciting races like club racing does?”. Of course like you I know the reasons.  However, there are some similarities between club racing and F1. Like many club racing series, F1 has had to take what races it can get to be able to have a reasonably full calendar.

Nurburgring in October seemed as good an idea as Silverstone at Easter did 20 years ago, though the Eifel Grand Prix’s timing was necessity rather deliberate sabotage. Sure enough it was cold, and fog enveloped the ‘Ring on Friday. The medevac helicopter couldn’t fly so there could be no question of FP1 and 2 going ahead. As a result, FP3 became the first time in the event that the drivers had been on the circuit. More importantly, it was the first time the tyres had seen the circuit in the weekend, and the lack of experience caused issues for most teams.

With 8 degrees of air temperature and 15 degrees of track temperature, the tyres were well outside their window. Inaki Rueda, Ferrari head of Race Strategy, explains: “Usually the track temp is somewhere between 30 and 40 degrees centigrade although the Pirellis can work fine up to 60°C, which we can see sometimes in Bahrain. It is pretty unusual to see the 15°C we had in Germany. When the resistance limit of the tyres is too high, you get blistering, while if it is too low the rubber rolls off the surface giving the driver the impression that he is driving on a very slippery surface, like driving a road car in summer on snow tyres, but this also accelerates the wear rate.”  This meant that softs might well be the best choice for a good qualification, but in the race they could be less helpful.

With, amongst other things,  floor and bargeboard aero updates to the SF1000, there was some justified optimism. Both drivers sailed through to Q2, but Seb then struggled a little, and at 1’26.7 he was half a second behind Charles, out in 11th place, but with a choice of tyres for the race. Charles achieved optimum tyre condition on the out lap and a 1’26.03 gave him 4th on the grid, equalling the Scuderia’s best Q-result this year.

Further forward, it was thought that the DAS system on the Mercs helped excite the tyres and assisted in a first row start, Bottas having the upper hand on this occasion. Verstappen was 3rd, with his team-mate Albon 1/100 behind Charles. The contrast with Seb’s performance emphasises what a good job Charles is doing.  Both Renaults and both McLarens (separated by Perez) finished the top ten.

At the front, Hamilton made the better start, but Bottas didn’t let go and passed at turn 2. Hamilton put the pressure on Bottas, who broke on lap 12. He went wide at turn 1, letting Hamilton into a lead which he would hold to the flag. Bottas tried to fight back with new tyres but 5 laps later the MGU-H (turbine) gave up and the Finn withdrew. Verstappen did his best to challenge the Brit, but 2nd was realistically all he would ever manage.

Charles held 4th for 8 laps, but almost from the start he looked to be under pressure. The low temperatures which made the softs perfect in qualifying killed them in the race, so as the rubber rolled off and he was passed by Ricciardo,  Charles made for the pits (lap 10) for mediums which carried him comfortably through the middle stint. He was now on a two stop race, during which he pulled off several impressive passing moves on his way back up to sixth place by the time of his second stop (lap 35), where his only option was softs.  Back on track, he made it back to 6th again.

Seb opted for Mediums at the start, after which he lost one place to a hard charging Antonio Giovinazzi in the Alfa. As he tried to pass the Italian, he lost control at turn 1 and had to pit having flat-spotted his tyres too badly to continue. He passed Russell on DRS, but as Kimi followed him through, the Finn punted George off, causing a virtual safety car, which allowed Hamilton and Verstappen a free pit stop for mediums. At one point they were a minute ahead of P3 Ricciardo. It wasn’t generally close at the front.

At the VSC restart an overenthusiastic Albon chopped Kyvat’s front wing, leaving debris across the track, but it gained him nothing as he retired, overheating.

Seb had taken on hards, but they would not go the distance and so he came in for a final set of new softs on lap 41, which allowed him to fight, most notably with Kevin Magnussen. He was unable to get into the points, having to settle for eleventh behind Giovinazzi. In fact, life might have been better had Seb waited a couple of laps to pit. On Lap 43, Lando pulled off with electrical problems, having spent much of the race reprogramming via the steering wheel at most corners. Multi-tasking is obviously a core skill these days. This caused a real safety car so nearly everybody pitted for softs. That gave a problem to Charles who had no more fresh tyres and therefore “decided” to stay out.  At the restart, he had to give best to Pierre Gasly in the AlphaTauri to finish the race in seventh spot.

The restart excitement was, this time, from Dani on Max, but whilst it was of interest, it didn’t stick and it probably wasn’t ever going to do so, but there’s no problem with giving the viewers a quick thrill.  Perez and Sainz filled fourth and fifth, whilst behind Charles came [cliché alert] supersub Hulkenberg, covering for a gastroenteritis-ly challenged Stroll.  The top ten was rounded off by Grosjean and Seb’s nemesis Giovanazzi. The clutching-at-straws department might note that all Ferrari powered cars finished, while Renault, Honda and Mercedes powered cars suffered power unit failures, but the real cause of optimism was the genuine improvement in competitiveness of the SF1000. The team will be back soon.

And finally… Hamilton’s win equalled Michael Schumacher’s record of 91 GP victories. 72 of the German’s wins were obtained with the Scuderia, the other 19 with Benetton. To mark the occasion, Michael’s son Mick presented the Englishman with one of his father’s crash helmets. The Ferrari Driver Academy student was due to make his Formula 1 weekend debut here at the Nürburgring at the wheel of an Alfa in the fogged-off first free practice session. He’ll be back soon.