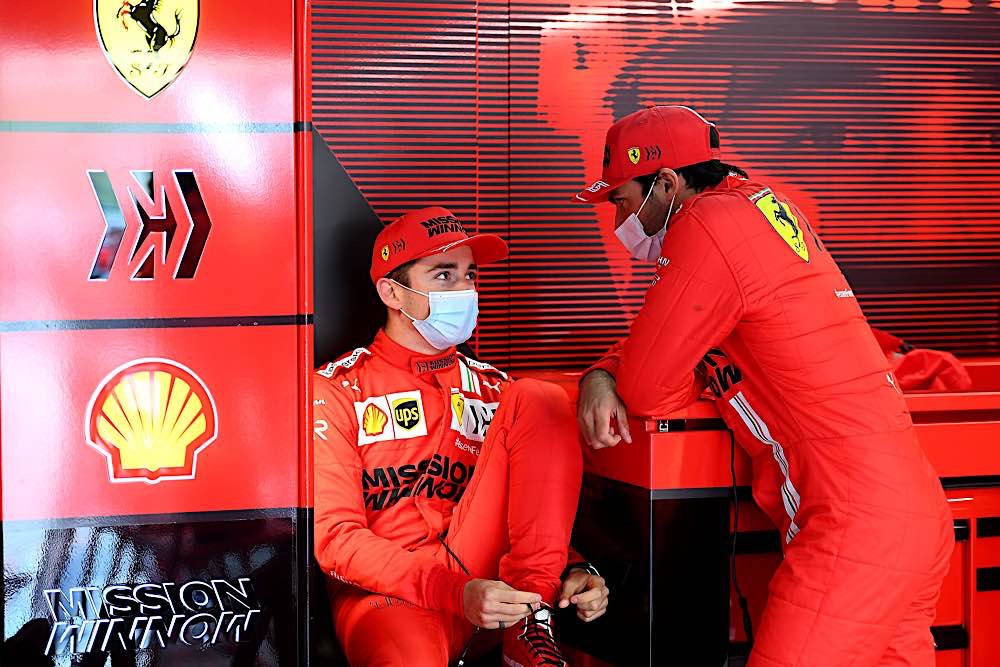 The lads, Charles and Carlos 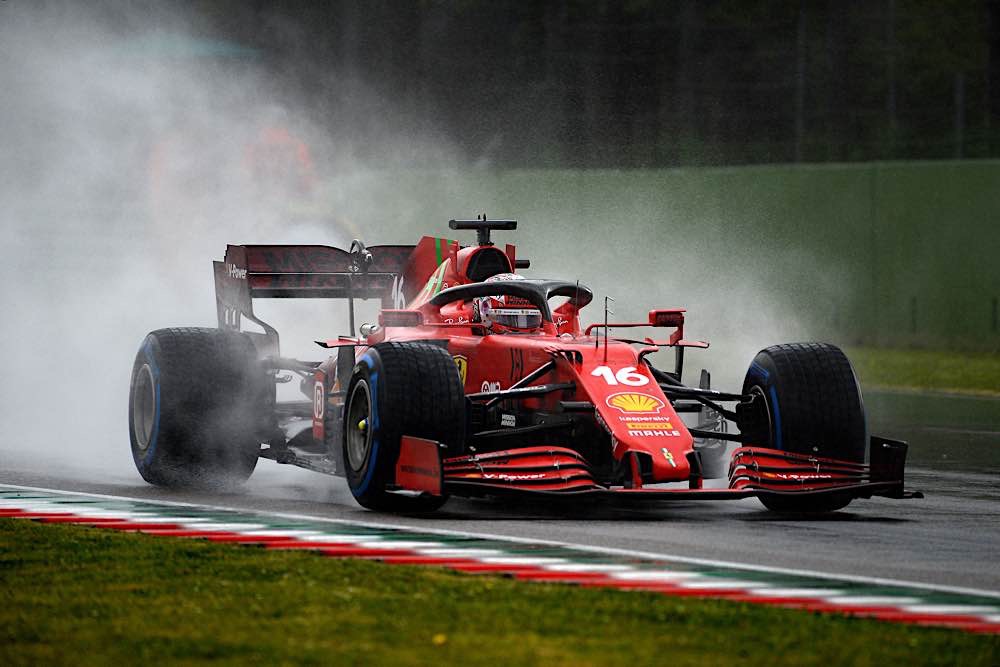 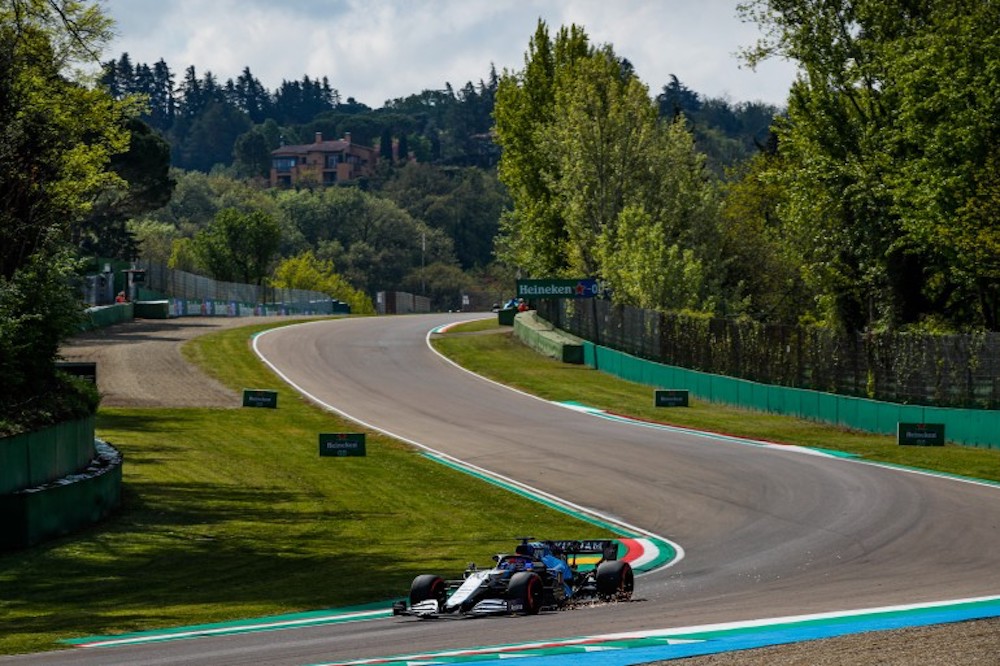 Whether it’s F1, football or fencing, sport is watched for three main reasons: to see our own choice of competitor win, to see an exciting, unpredictable competition and at the top level to see the ultimate exponents show us how it should be done. For readers of this website, the first remains a hope. The third is almost a given in any year. But strangely, the exciting, unpredictable element made a  comeback last year and it seems to have got even stronger this year. The order of the teams may have shuffled, albeit with Mercedes still just at the top and Haas emphatically bringing up the rear, but the gaps between teams and drivers is not as big as it was. This may be due to the cost cap but I prefer to think it’s the effect of the apparently minor tweaks the FIA made to the aero rules. A slice out of the rear floor doesn’t seem much but when teams will spend lengthy wind tunnel time refining tiny vanes it can be huge.

Pricey-pullover magnate Lawrence Stroll drew little but ridicule by grumbling that the rules had disadvantaged the development of his honestly-it’s-not-really-a-Mercedes-copy low rake car, and sure enough it seems to have slipped down the grid. Funnily enough Mercedes are still number one with theirs.

The top 10 were covered by under 0.8 seconds. Despite Red Bull appearing fastest in practice, Hamilton produced his habitual pole position by the very simple method of being closer to perfect than anybody else. Both Perez in second and Verstappen third made minor mistakes (final corner and turn 3 respectively), but it was a major shock that the confirmed no2 and Racing Point reject beat the hard trying Dutchman. Time for the genial Max to tell the team who’s number one and that they’d better mess with Checo’s settings. There was no need for The Ham to have the same conversation as Bottas duly confimed his number 2 status with 8th, almost 0.5s behind his no1 and under 0.4s ahead of his nemesis Russell.

There was mixed news for Ferrari enthusiasts. The car looked competitive, and the fact that it continued this perception from Bahrain hopefully means that it is not flattering to deceive. Charles in fourth was a second off Imola pole last year, compared with 0.3 this year. Carlos disappointingly just failed to join Q3 so started 11th. He said the time was there but “every small mistake can cost you many positions in this tight field”.

As if to prove that there’s a bit of moving in midfield, Gasly achieved 5th while McLaren continue their upward trajectory from last year with Ricciardo outperforming Norris for 6 and 7. Lando’s last time would have been 3rd, but an off-track gave the armbands who run the sport an excuse to erase it.  The top 10 was completed by Ocon, who did well with the Alpine which seems to have moved backwards since last year, and Stroll, who would have been 9th if he’d stuck to the track.

A touch of rain. Excellent, it all adds to unpredictability.  So does fire, but not in a good way as Aston Martin found out when both cars’ brakes set light, necessitating a brake change for Vettel, and a pit lane start. He was later penalised for this, but informed only after 17 laps.

Verstappen has clearly been studying the recordings of Hamilton squeezing legally at the start. Neither is one to give way but Max is getting a bit more of the evil genius subtlety he has previously lacked and despite a good start from Ham he squeezed the Brit over the kerbs, removing part of his front wing. Charles gained a place over Perez, to give three different cars in the top three, including a Ferrari.  2021’s looking good.

A lap later, the groans from the pit lane could be heard as Lattifi spun his Williams in the damp, and rejoined in the path of the (in this case) hapless Mazepin. Both were eliminated. Always the team to go for comedy, Haas’s Schumacher then spun under the safety car at the pit lane exit, destroying his nose. He couldn’t come in to replace it because the pitlane was closed due to collecting the shrapnel from Schumacher having spun at the pit lane exit, destroying his nose.

Continuing the theme of safety car errors, Perez spun and repassed two cars. 10 second penalty which took an age to be handed out. It would be helpful if (a) drivers learnt the rules and (b) stewards also learnt the rules so that mistakes didn’t happen so often and then those that do are punished promptly.

Hamilton, whose car is a bit lighter on the tyres than the RB’s, started to take time out of Verstappen. As a result Charles dropped to 15 seconds back. Gradually the grid changed to slicks, the mediums being the choice of most. Hamilton was delayed by a slightly slow stop but on lap 32, by which time Charles was second to Verstappen, the Brit went off at Tosa. The nose was damaged as he hit the car against the wall while trying to recover. With some effort he selected reverse and backed though the gravel onto the circuit. This caused a bit of disquiet on social media, where many thought reversing on the track wasn’t allowed. This was presumably prompted by the  FIA’s General Prescriptions of 2019 which, unlike the F1 Sporting Code, are applicable to all FIA championships run on circuits. Clause 13 states: “Drivers are strictly forbidden to drive their Automobile in the opposite direction to the race unless this is absolutely necessary in order to move the Automobile from a dangerous position.” Nobody can blame Mercedes and Hamilton for taking a chance as there was nothing to lose, but Race Director Michael Masi’s subsequent justification that the operation was done with radio instruction doesn’t seem to answer the basic question.

A conspiracy theorist would now claim that Toto Wolff told Russell to “do a Piquet Junior” and stop the race. I am above such nonsense. [really? – Ed] At a 200mph point of the circuit Russell in his Williams went to overtake Bottas’s Mercedes, a sentence that would normally require fact checking several times, but he hit the grass. He speared into the Finn who hit the barriers on the inside and outside; George had a comparatively light accident, but still unwelcome damage for the struggling Williams team. Ignoring the maxim which is true through all motorsport of “never react within 5 minutes of an accident”, he marched up to Bottas, still recovering from two big bangs, and shouted some sort of blame followed by a tap on the helmet, thus destroying his Mr Nice Guy image. It also destroyed any suspicion of intelligence as the likelihood of a conversation between two drivers wearing helmets and earplugs is limited.  He later apologised when the truth was explained to him, the key truth being Toto Wolff’s “behave like that again and you’ll be in Clio Cup next year.”

The resultant red flag gave time for a new nose for Hamilton and, after following the rules to unlap himself,  a restart for him from 8th after Raikkonen spun behind the safety car and retook his place. Raikkonen was subsequently docked 30 seconds for this but as it took over 3 hours to reach this decision this perhaps says more for the governance of F1 than it does for Kimi who was probably on his nth vodka by then. After an initial twitch by Max, the restart was fairly clean. Norris was behind Charles but during the stop had switched to softs which initially proved the better choice over Charles’s mediums, so rapidly demoted him to third.

As for Carlos, he is building a reputation as quiet, professional and efficient.  From his lowly grid place of 11th, he was 8th by lap 2, and though he had a few scares in the tricky conditions – both for grip and visibility- he had fought up to 5th by the red flag. After 4 laps of restart racing, Perez spun at turn 4 and dropped to 14th, an unfortunate mistake after an otherwise good weekend, but pleasing for Tifosi as Charles and Carlos were now 3rd and 4th.

The recovering Hamilton, with his now 100% working Merc, passed Carlos on lap 42 and Charles on 55. The softs that gave Lando the advantage over Charles proved his undoing on lap 60 when Hamilton’s mediums proved to be superior. An untroubled Max won from Hamilton by 22 seconds, with Norris 2 seconds behind, Charles and Carlos following at a similar interval. Not only have Ferrari made great advances, but McLaren also seem to be getting there, as Ricciardo was 6th. The surprisingly effective Alpha Tauri of Gasly was 7th, with a 5 second penalty dropping Stroll to 8th.  Ocon led the other Alpine of Alonso to complete the top 10.

Imola was a good start to the European Season for Ferrari, who will hopefully recover even further.

After a good start in Bahrain, Tsunoda was somewhat disappointing.

Even allowing for Haas, Mick Schumacher is no Michael.

The AMG returned as a safety car and will alternate to give time to fix the Aston between races.

Of the older champions, only Alonso managed the top 10 with Raikkonen 13th and Vettel 15th.  Vettel and Alonso are in cars new to them at a circuit with less run-off than Bahrain. Will we see a renaissance of the old hands as they become more familiar with the cars at more open circuits?

And finally, I was lucky (within the Covid rules) to attend two race meetings at Donington this month. Both were run by Jonathan Palmer’s MSVR. Official decisions were made quickly and efficiently and notified to the teams by professional Clerks and Stewards who know the rules. Recovery was prompt even with a limited number of snatch vehicles. Safety car periods were short and sharp, but effective. I wonder, is there any possibility that F1 could follow the example of British Club racing, because on Sunday while the racing was good, the organisation verged on shambolic.