GRAND PRIX: Emilia-Romagna: The Agony and The Agony 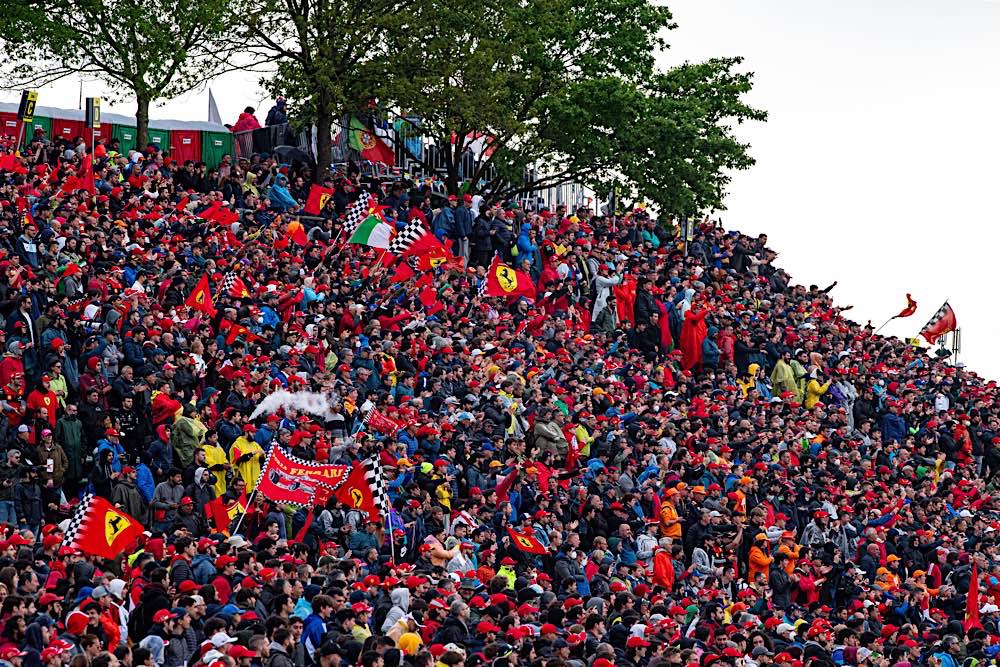 The Scuderia had solid support. 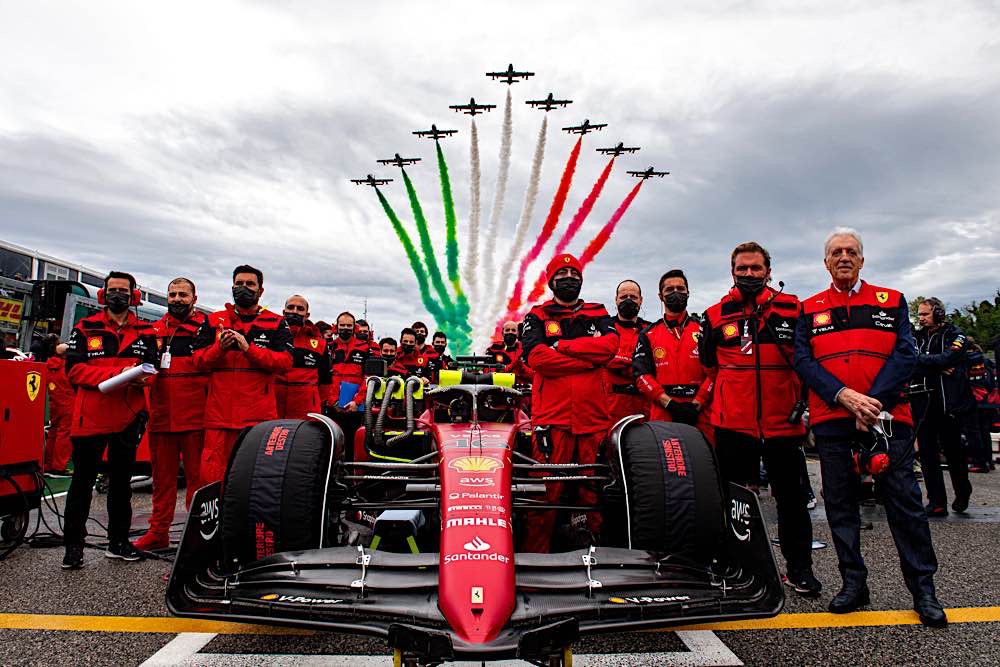 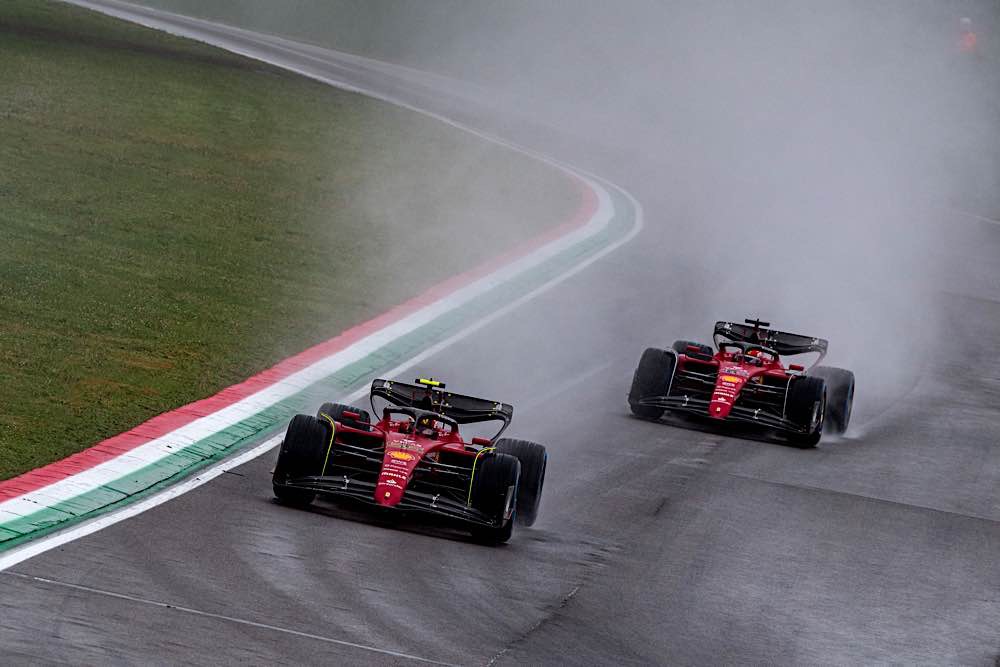 A wet Q2 was the last time the cars ran together. 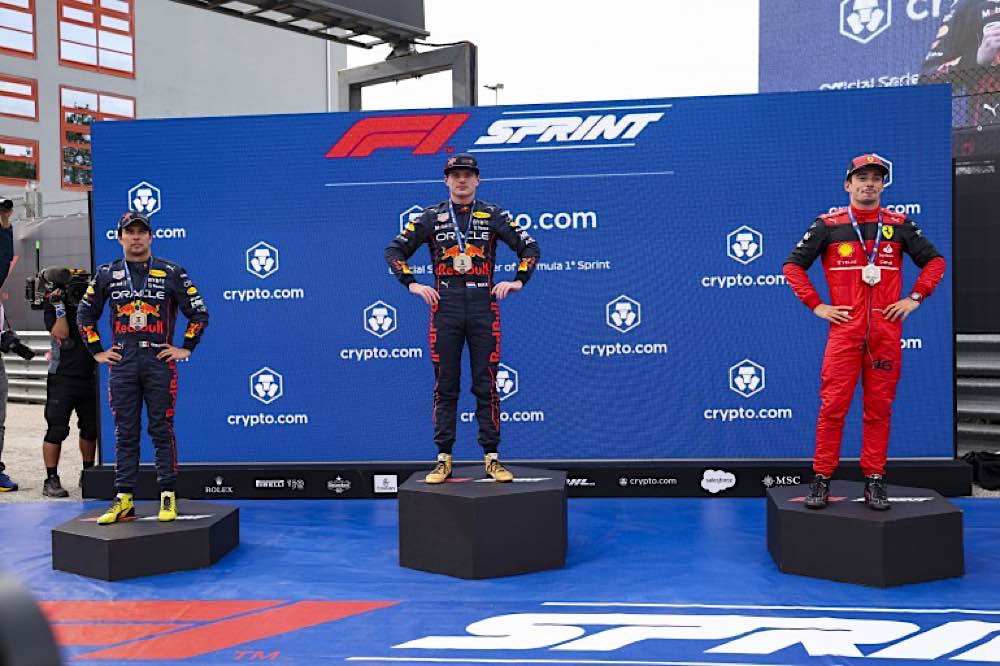 2nd in the Sprint Race 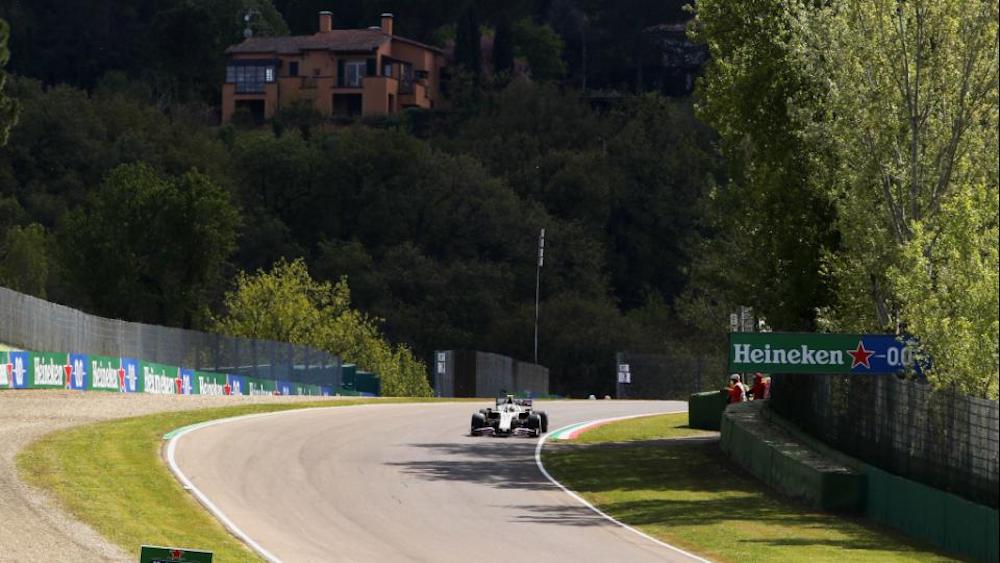 A pleasant view through the trees.

Shortly after the Imola Grand Prix I visited the BRM Track day at Blyton Park in Lincolnshire. There were some beautiful cars (in particular the V16 Replica/Continuation) but my breath was taken away while watching a P153. The driving flowed, gearchanges were imperceptibly smooth and quick, lines used all the road but were tidy, there was no brutality, and through the only chicane I could see the driver was still accelerating when others had braked, and then accelerated again. Everybody on the banking was spellbound. To add to the sense of awe, I was told the driver wasn’t used to racing H pattern gearchanges.

The driver was Estaban Gutierrez, ex Sauber (2013/14), Haas (2016) and (relevantly for this report) Ferrari test/reserve driver in 2015 [and I saw him in Reg’s cafe in Banbury once – Ed]. With six career points, his impact on F1 was to say at least secondary and yet his driving was on another plane to everybody else. This made me realise that although from our keyboards myself and my colleagues may snipe at the drivers in F1, they are without exception on a whole other level, and extremely talented, even the ones we may criticise.

Unfortunately the reason for this preamble is that there was a costly mistake at Imola, and it’s important to remember that at the level these drivers operate, the tiniest of errors can have disastrous consequences. I’m certainly not going to criticise Charles or Carlos for the errors that meant a possible 1-2 ended poorly.

BBC “Strictly” fans will know the expression “slow, slow, quick quick, slow”, and this summed up qualifying. Q1 began damp, and generally intermediate shod. Albon’s brakes exploded,  leading to a 10 minute delay which allowed higher speeds. Both Alpha Tauris and Ocon were eliminated besides the inevitable Williams, which if nothing else illustrates how much the regs have shaken things up. Last year Gasly would have been mid-rank in Q3.

Q2 started on softs and with rain expected, fast times were needed straight away. While in 5th and going for a better time, Carlos parked his F1-75 in the barriers. The rain fell as it was recovered, so no better times were posted and he was guaranteed 10th on the grid. Disappointing, but not as bad as Hamilton who was still down in 13th (with Russell 11th) when the rain fell. So we had a session where Magnussen in a Haas was in Q3 but no Mercedes got out of Q2.

Q3 was back to inters, and it was interesting to compare strategies. Charles was initially fastest, but while he did a cooling off lap Verstappen carried on and beat him by 0.8s on 1:27.999. Then Bottas’s Alfa broke down, causing a red flag, meaning Charles could not improve due to a slow middle sector. With only 3 minutes left, a flying lap was possible until Norris slid off at Acque Minerale. This left the order as Verstappen, Leclerc, Norris, Magnussen (yes, really), Alonso, Ricciardo, Perez, Bottas, Vettel and Sainz.

Unlike Winston, I quite like these sprint races, but with the slightly random grid (Ferrari’s press release described it as a lottery) I wish that the Grand Prix had started using the qualifying order. Apart, obviously, from Carlos.  As it was, the sprint race sorted things out a bit and we ended up with a slightly more normal final grid.

With softs being the choice of most, Charles took the lead at the start from Verstappen. Behind them, Perez made a dart for 5th from 7th, and Magnussen, obviously finding the sharp end attractive, got a black and white flag for weaving in front of the Mexican who wanted 4th. There was a safety car after Zhou tangled with Gasly, and this might perhaps have influenced Sunday more than we realised because it gave the softs a respite and allowed Verstappen to push at the end.

Charles held the lead at the restart and as DRS was enabled, Perez passed Magnussen and then Norris for third. Meanwhile Carlos had gain two places at the start and gradually worked his way up to 4th, passing Norris on lap 19. On lap 20, Verstappen, who had been close behind Charles, made use of DRS and potentially of slightly better tyres to pass for the win, leaving the grid as Versappen, Charles, Perez, Carlos. Behind them, Norris and Ricciardo gave McLaren a bit of succour while Bottas blessed his good fortune for passing from Mercedes to Alfa. Magnussen and Alonso were 8th and 9th, while Mick Schumacher dragged a second Haas into the top 10.

It’s difficult to say who had the worse day of the two Ferrari drivers. Let’s start with Carlos.

At the wet start, Daniel Ricciardo obviously was a bit overwhelmed by being so unusually near the front. He tried to move from 6th to pass Carlos but caught the Spaniard who spun into the gravel. Ricciardo did manage to continue but ended 18th. Carlos took it well: “I  braked well into turn 1, leaving enough space to my left, but unfortunately Daniel lost control of his car a bit and hit me from behind, throwing me into a spin and into the gravel. It’s a big shame because we were up for a good race, but there is nothing else I could have done differently at that point to avoid it.” Ricciardo, being an honourable man, was contrite. “I obviously have to be accountable for that. I’ll go see Carlos and apologise. An apology doesn’t change anything but, at least for now, that’s all I can do.”

For Charles it was a bit more complex; and if anything, more agonizing. He made a poor start and was passed by Perez and Norris. Verstappen disappeared into the distance and won, with extra points for pole, the sprint race, fastest lap and whatever else they give points for these days. He couldn’t have had a better day, though it was  bit dull to watch.

By lap 8, Charles had taken 3rd back from Norris and as the track gradually dried he caught Perez. At around this time (lap 16) Ricciardo, with little to lose, became the first to try slicks (mediums). They seemed to work and shortly afterwards he was copied by most of the others, including Perez. Verstappen,  Leclerc and Norris stayed on intermediates for a bit longer, pitting on lap 19. Whilst the TV concentrates on the drama of the stop itself, where the Monegasque’s stop took 1.4 seconds longer than the Dutchman’s, the overall “entry to exit” time was even worse at 1.8 seconds longer than RedBull. Again, a forgiveable issue but one which might have contributed to the race outcome. He rejoined ahead of Perez, but Checo took advantage of hot tyres and passed into the Villeneuve chicane. Would another 1.8 seconds have kept Perez at bay?

The next laps were great racing as Charles pressured Checo and the latter defended superbly. After 5 laps or so it became clear that Perez was not going to easily give up, a fastest lap being one good hint. There followed 20 or more laps with Verstappen 10 seconds ahead of Perez, who was just over a second from Leclerc, who was 15 seconds from Norris.

By lap 49 there were 14 laps to go and a gamble was in order. Charles put softs on, rejoining behind Norris but soon passing him. Meanwhile, RedBull responded in the next two laps by swapping both their men. Leclerc was catching Perez but as he was ready to pass, the Mexican’s tyres had come in and he was able to defend. It was all thrilling stuff, and with over 12 laps to go, there was the fantasy in my mind, and I guess some of those at Imola, that Charles would pass Perez and then catch Verstappen. It was not to be. He took a bit too much kerb at Variente Alta and launched into the air. In perfect conditions it would probably have been catchable, but with damp still present on the circuit it wasn’t and Charles kissed the barriers, enough to just take off the wing endplate. He kept the car going and rejoined in 5th. We’ve all seen races where the car is brought back with part of the aero missing, but the decision was taken to replace the wing (at the same time swapping on new softs) which dropped Charles to 9th.

It took a couple of laps to pass Magnussen, another three to pass Vettel, and then the final pass was on Tsunoda for sixth, which is where he finished. In front of him, Bottas wasn’t able to dent George Russell’s fourth place while the podium consisted of Verstappen, Perez and Norris. Behind Charles were the three he passed in unchanged order with Stroll scoring Aston Martin’s first point of the year. Spare a tear for poor old Hamilton, languishing in 13th and nine places behind his team-mate. That must hurt.

This was a race of might-have-beens. Could Charles have had pole if his softs had hung on in the sprint? Or would Verstappen’s tyres have held on as well if there hadn’t been a safety car? Would the fight have been different if the pits stop hadn’t been 1.8 seconds slow? Or if Charles had made a better start? Or if Carlos had made a better start and been in the mix to provide some support? A few millimetres different and would Charles have missed the wall altogether? The answer to all these questions is simply that Charles finished 6th.

Elsewhere, Ricciardo had an utterly pointless afternoon in every sense of the word and must by now be considering his position.  Nice chap though he is, maybe the clunky Formula E is quite attractive?

And finally, while the atmosphere in the Ferrari meeting room after the race was undoubtedly a bit down, at least it can’t be a low as Mercedes..