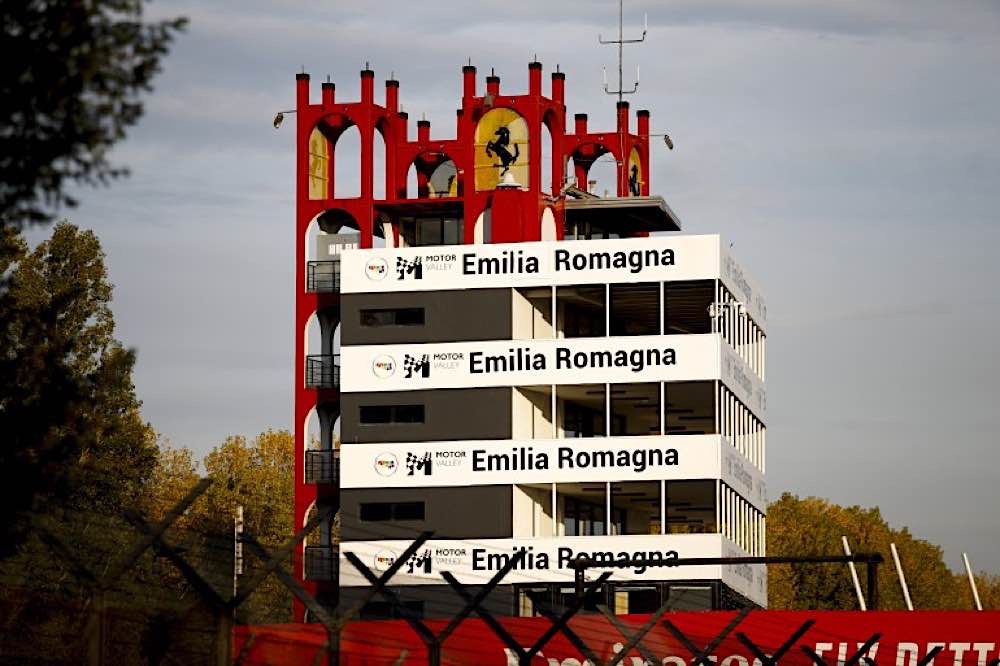 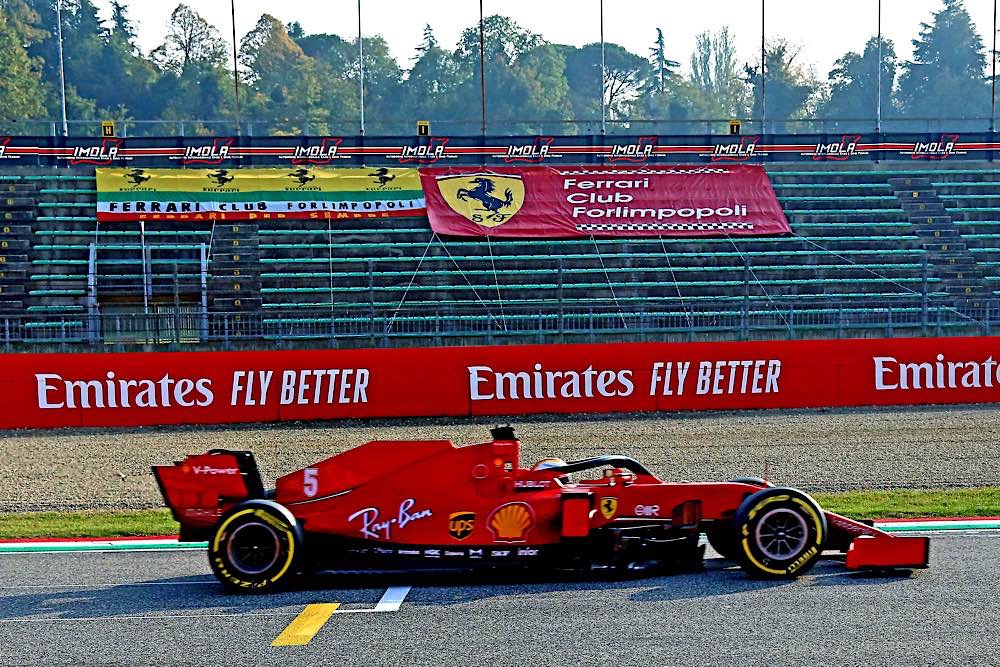 Dramatic support from Forlimpopoli, population 13,184, of which none seem to be present. 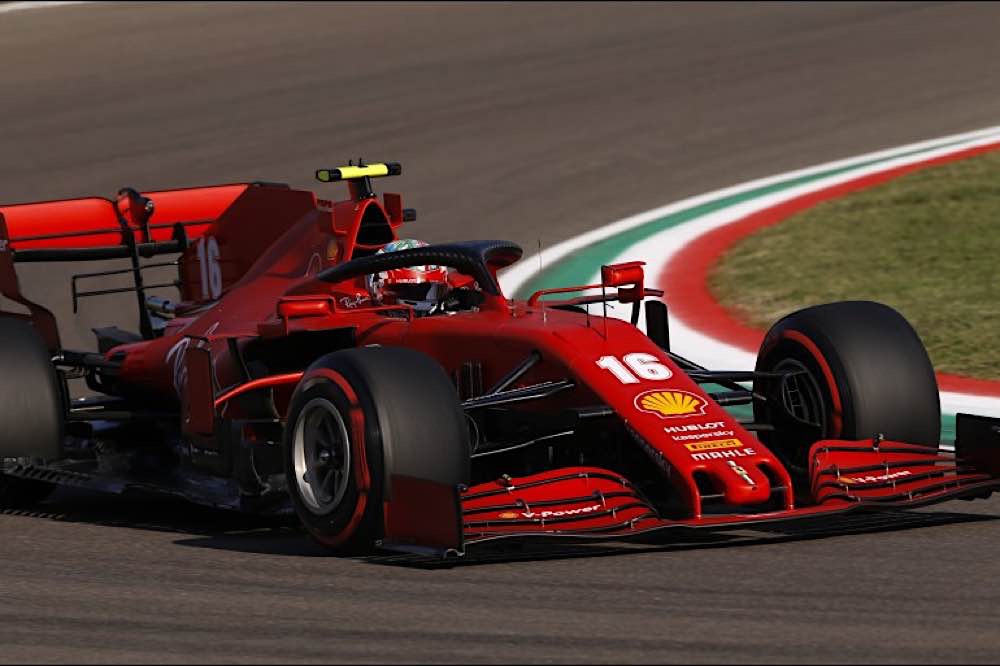 Charles looks at home at Imola, which is reasonable as it's the closest GP to Maranello.

The Emilia Romagna area of Italy, and more specifically the Autodromo Enzo e Dino Ferrari, hosted the 13th round of the 2020 World Championship at Imola. Whilst the results this year have been very predictable, the venues continue to be varied, with Imola hosting the 3rd Grand Prix in Italy this year, 14 years after its last. The Scuderia celebrated in 2006 with Michael Schumacher winning his 85th Grand Prix, before being replaced in 2007 by the only current driver on the grid that day, Kimi Raikkonen. The race weekend commenced with confirmation he will continue with the Alfa Romeo team for 2021, his 19th season in F1.

The Alfa announcement was one of three  over the weekend, with Raikkonen’s re-signing together with his current team mate Antonio Giovinazzi being predicted by the media. While both drivers are performing competently one does wonder what the Alfa management are trying to achieve; a Raikkonen re-signing with say Mick Schumacher as his partner could be justified, as Ferrari would have a sensible baseline to determine whether Mick could have a long term F1 future, but we already know after two seasons that Giovinazzi is not going to be a future star (Raikkonen has out qualified him this year 7:6), so why sign them both again? Perhaps the new 2022 regulations and being Italian may provide answers, but if Ferrari are going to back five drivers in F2, three of whom could be Champion, why not promote more? With Alfa’s announcement only one Ferrari junior is likely to step up, with Mick rumoured to be a Haas driver in 2021.

The second announcement was Pierre Gasly being confirmed for a 3rd year as an Alpha Tauri (nee Toro Rosso/Minardi) driver in 2021. While deserved, his win at Monza has obviously not impressed the Red Bull hierarchy sufficiently to promote him to the main team, where Alex Albon’s future seems very tenuous. From Pierre’s viewpoint it would seem Red Bull do not see him as the future, so no doubt he will be looking for a different seat in 2022.

If Ferrari have an embarrassment of riches, Red Bull’s junior program does not seem to be producing any future stars, an issue highlighted but not seemingly addressed three years ago when Brendan Hartley was given the Toro Rosso seat, having previously been dumped from the Junior program. Currently rumours abound that Albon’s seat will be taken by either Nico Hulkenberg or Sergio Perez, both reliable, proven F1 drivers but hardly ‘up and coming’ stars which fit the image Red Bull try to project. Both however should be a reliable back up to Red Bull’s Max Verstappen and theoretically give them a much greater chance of fighting for the manufacturers championship. But is that theory justified?

Red Bull in 2020 appear to me to have seriously underperformed, with only one win to date, despite a works engine deal and a seemingly unlimited budget. Their car appears difficult to drive, as highlighted by pre-season testing and yet never fully addressed if you believe their latest press releases. As a result, Albon’s season has been difficult, highlighted by his current 9th place in the Drivers’ Championship in the ‘second best’ car. Really? “Second best”?  Even with their resources which include design guru Adrian Newey, it would seem the primary reason they are the main challenge to Mercedes is the undoubted talents of Max Verstappen; I suspect he would still be the main challenger if he were in a Renault or McLaren. In fact the Red Bull story in 2020 continues that of previous years in the hybrid era where, despite a competitive car, a tally of 17 wins over 7 seasons is poor reward for the resources employed and hype that the team generate.

The final announcement was Williams reiterating their earlier confirmation that the 2021 drivers would be unchanged. George Russell continues courtesy of his Mercedes connections, but is he seriously a contention to replace Bottas in 2022? Nicholas Latifi keeps his seat due to the size of his father’s bank account, but his race performances perhaps indicate Russell is not the Hamilton replacement the British press forecast.

Imola acted as a trial for Liberty wishing to reduce race weekends to two days in order to allow more time for actual races (or “broadcasts”); the draft 2021 calendar envisages 23 broadcasts (or “races”). The idea must come from  an accountant.

What Imola showed was that, unsurprisingly, if practise is reduced (to 1.5 hours plus qualifying) the same teams remain at the front with Mercedes again locking out the front row, this time with Bottas leading the way. Max Verstappen as ever was the main challenger but 0.5 sec slower than the (ex) Silver Arrows.

From a Scuderia perspective Leclerc continued his recent fine form, getting ever quicker through each qualifying segment and finally achieving 7th on the grid, only 0.1 seconds slower than Minardi’s impressive Gasly in 4th, followed by Ricciardo and Albon, the top 10 being completed by Kvyat and the two Mclaren’s, the Alpha Tauri cars being the surprise package around their home track.

Sebastian Vettel continued his challenging form in qualifying; the 0.4/0.5 second gap to Leclerc meant he only managed 14th on the grid while the remaining four Ferrari-engined cars did not get out of Q1.

Qualifying was significantly quicker than in 2006; then Michael’s Ferrari was on pole at 1m 22.8, while Bottas managed a 1m13.6; most of this could be explained by the Varianta Bassa chicane being removed, so have the last 14 years really brought anything?

With few (any?) obvious overtaking spots the race at Imola was anticipated to be like a fast car chase, and until a late safety car this proved to be the case.

Bottas led off the line for the lead, but Verstappan managed to pass a surprisingly slow Hamilton, which set the tone for the first 17 laps, when the Red Bull pitted followed by Bottas. They re- emerged in 2nd and 3rd while Hamilton opened a large gap with very quick lappery on his medium tyres. Further aided by a virtual safety car, Hamilton maintained his lead after his lap 30 pit stop, controlled the race thereafter and set fastest lap. So very 2020.

After their stops Verstappen eventually pressurised Bottas into a mistake on lap 42 as the Finn struggled with a wounded Mercedes, as its undertray had picked up some substantial Ferrari bodywork discarded by Vettel in a first lap incident with Magnussen. This was the bit in the classic car chase when they picked up the cardboard boxes in the alleyway.

Verstappen ran 2nd for a few laps but suffered a rear tyre blow out on lap 50 ending his race in the gravel trap. Bottas thus inherited 2nd place, and the result meant Mercedes have won their 7th consecutive manufacturers championship with four races remaining.

Behind the top three the high speed car chase had lost Gasly on lap 8, but grid order had largely been maintained until the safety car intervened due to Verstappen’s incident. The exception had been Perez, who used a poor qualifying to his advantage by running the medium tyres at the start which meant he ran longer and emerged 4th after the pitstops. The safety car allowed Perez and Kvyat a second stop for soft tyres, but while Perez suffered and fell back to an eventual 6th, Kvyat switched his tyres on quickly passing Albon, Perez and Leclerc (around the outside of Piratella) on the restart to finish 4th, just behind Ricciardo who held on for a podium on a 1 stop strategy. Similarly, Leclerc, who had passed Albon at the start, held on for 5th, his tyres past their best having pitted on lap 12 of the 63 lap race. The top 10 was completed by the McLaren twins followed by the Sauber pair, both Raikkonen and Giovinazzi having driven well from the back, the former being unlucky to pit only 2 laps before the safety car and what could have been a ‘free’ stop.

After Vettel’s first lap incident he raced well on Medium tyres to be in 4th place on lap 39 before a long pit stop undid his day’s work, resulting in a 12th place finish. At least both cars from the Scuderia finished unlike Haas where Magnussen retired with gearbox issues, and Grosjean was 14th.

The circus now embarks on its Eastwards finale trip, with the next stop in Turkey. A 7th title for Hamilton is a formality; fingers crossed for more forward momentum from Ferrari.