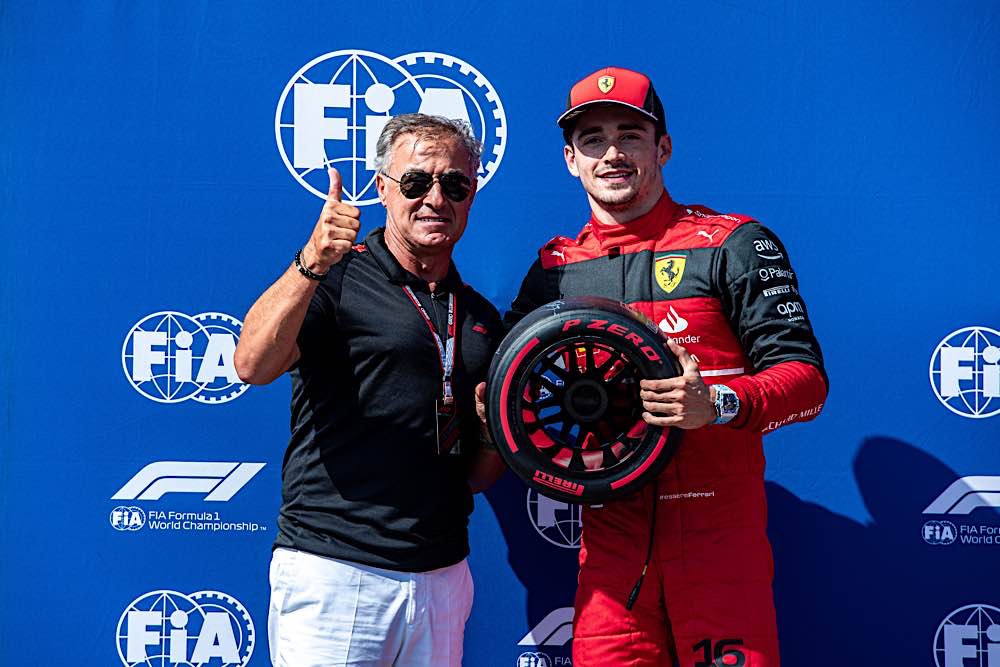 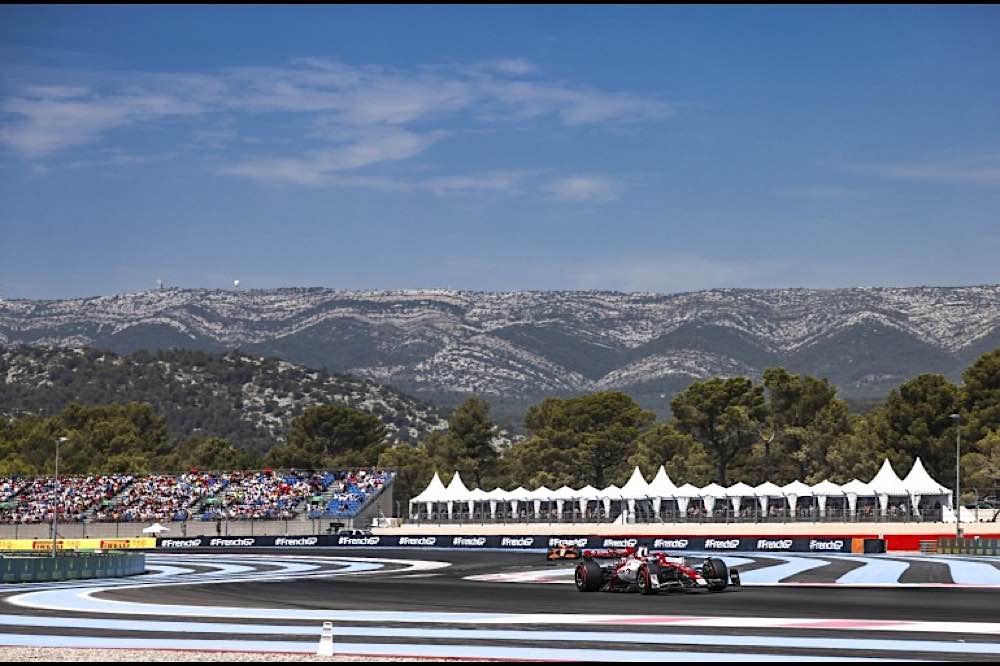 Paul Ricard is in the hills near Marseilles. 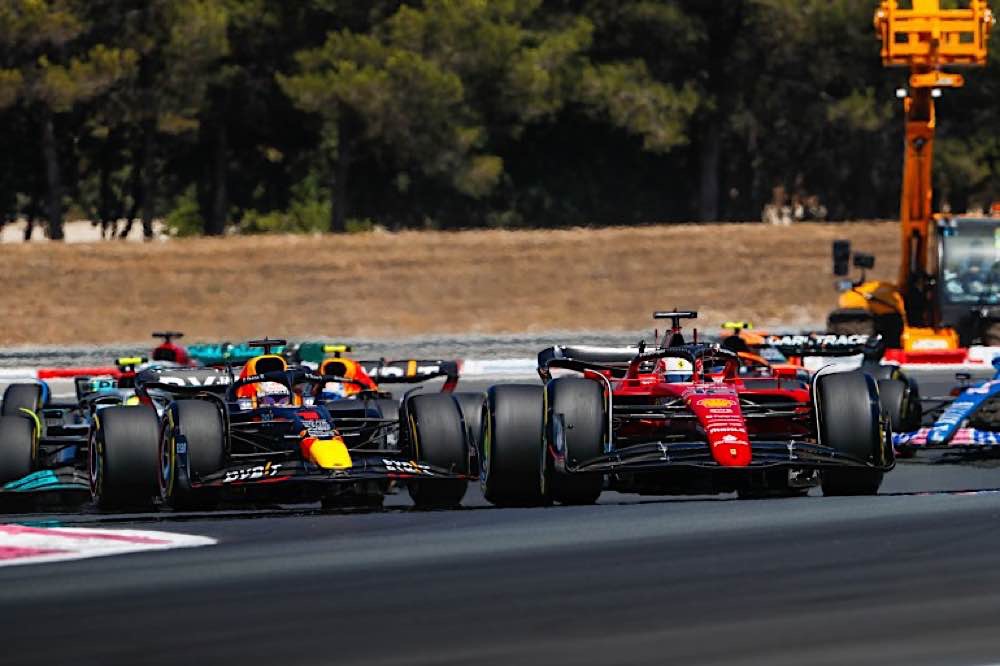 Report by Tony Cotton, with acknowledgements to  Ferrari media and FIA.com.

In my report on Austria, I may have given the impression by describing Max Verstappen as “unimaginative, a bit dirty, and brutish” that I had a negative view of him. I have since been told by our legal advisers that I do not, and never did, have this view and that I consider Mr Verstappen to be a jolly splendid and sportsmanlike chap. As a result I have been trying to put myself into his mind. This is the result.

“Oh dear, I would have liked to be on pole in qualifying, and both of the Ferraris are faster than us. Still, not to worry, because the engine penalty for Sainz in Austria means he’s still behind me in 19th. Leclerc’s faster and on pole but I’m 48 points ahead so I will just aim for a finish. The Mercs are OK but slow, everybody else is even slower, and chances are that even if I’m cruising for second something will break on the Ferrari or they’ll put the front wheels on the back at the pit stop, or there’ll be some other form of disaster for them, so I’ll still win and the car won’t get strained.”

How I wish that was just unwarranted cynicism.

Both drivers got their F1-75s comfortably through to the final phase of qualifying. On both his runs, Charles was able to get a tow from Carlos’ slipstream. It was effective down the main straight before the first chicane and especially so after that and through the Signes corner. The first run produced a 1’31”209, followed by an incredible 1’30”872, which proved to be unbeatable, and the only lap of the day under 1m 31.  The fact that Carlos got to Q3 gained him a place on the grid, putting him 19th on the clean side, ahead of Kevin Magnussen (10th in Q3) who also had a penalty.

It was sad after recent performances to see Mick Schumacher out in Q1 for track infringement, but otherwise the pruning sessions ran to form.  In Q3, Pérez made a significant gain of more than three tenths of a second in his final run to claim third place, more than four tenths clear of Hamilton. Norris put in a good lap for McLaren to take fifth place ahead of Russell, Alonso and Tsunoda.

At the start, Charles kept the lead and by the end of the first lap Carlos was up to 17th. Carlos then passed one car per lap, first Valtteri Bottas, then Pierre Gasly, Mick Schumacher and Alex Albon to get up to 13th place. By lap 9, Charles was just ahead of Max Verstappen. Carlos passed Magnussen to go 12th, and 2 laps later passed Sebastian Vettel for 11th and then dispensed with Lance Stroll next time round to move into the points. All seemed to be working well.

On lap 16, Verstappen pitted for hard tyres, rejoining seventh. His tyres would last through to the finish, as they did for most of the grid who pitted around the 16-19 mark. A lap later Carlos made up another place (Ricciardo) for ninth.

Then disaster struck. Charles went off the track at turn 11 and his race was over. He tried to extract himself, and it was then that the radio had references to throttle problems. It was later explained that this was an issue on mapping when trying to reverse rather than a repeat of the Austria sticky throttle. It was also emphasised that porpoising had nothing to do with it, as Mercedes had suggested. “I made a mistake and paid the price for it”, said Charles, but it must be said that it looked more like a “Club driver at Castle Combe” mistake rather than one from a man fighting for the world championship.

The Safety Car came out allowing Carlos, and many more, to pit. He rejoined eighth but perhaps 9th would have worked better because the rush to get out meant he had an unsafe release into Albon resulting in a 5 second penalty. Carlos passed Norris, Alonso and, in a rather spectacular move around the outside at Signes, Russell to reach 4th. On lap 41, again at Signes, he took Perez for 3rd.  By this time there was some hope that with this pace, Carlos could run to the end and be 5 seconds ahead for a podium. But it was not to be. The mediums didn’t have the durability, apparently, and it was necessary to pit for a new set. At least, that was the view of the strategists which according to various interviews wasn’t the view of Carlos, but what does he know. Carlos rejoined in 9th after the 5 second penalty, got fastest lap and made it back up to 5th.

On lap 49, Alfa Romeo’s Zhou Guanyu stopped in the run-off area at Turn 5 and the race was neutralised by the deployment of the Virtual Safety Car. When the caution finished at the end of lap 50, Russell pounced, easily powering past Pérez as the Mexican appeared to slow in order to stay within the speed delta.

Pérez tried to respond but the Mercedes driver was able to keep the Red Bull man at bay over the final three laps and soon after Verstappen had crossed the line to take the 27th win of his career and his second French Grand Prix win in a row, the Mercedes cars of Hamilton and Russell powered through to take second and third place ahead of Pérez.

Behind the Mexican, Carlos was fifth ahead of Alonso, with Norris seventh ahead of Alpine’s Esteban Ocon and the second McLaren of Daniel Ricciardo. The final point on offer went to Aston Martin’s Lance Stroll.