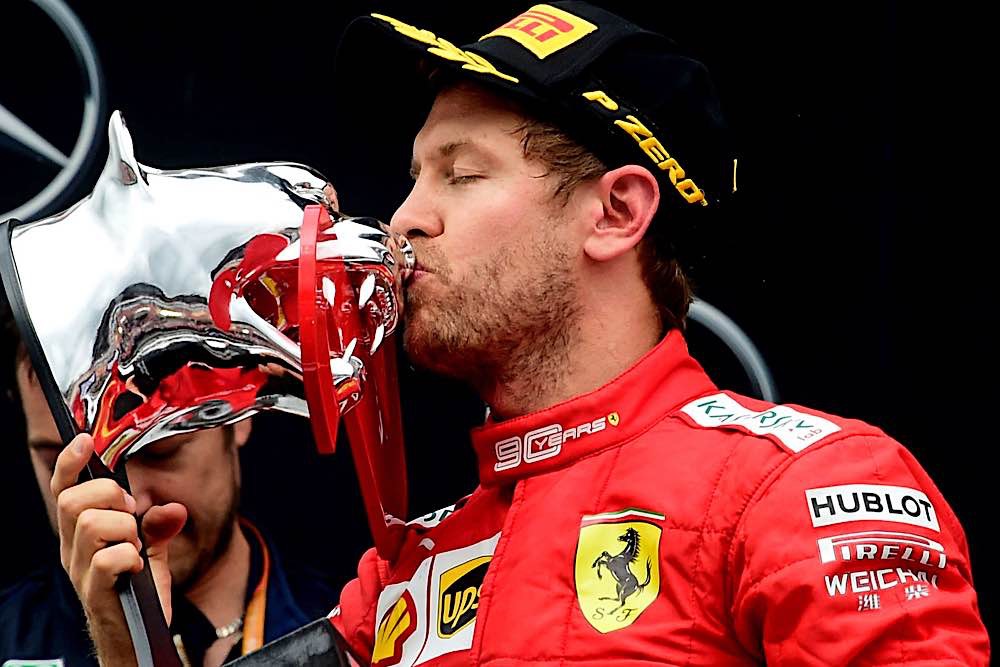 A hard won second for Seb 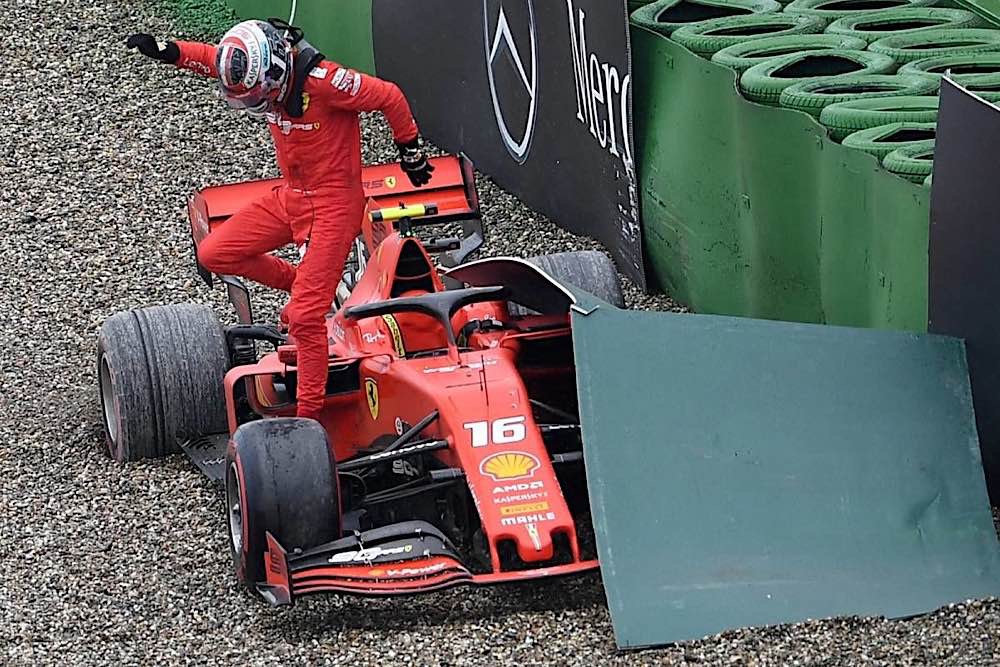 Charles steps from the car, having demolished the opposition's poster 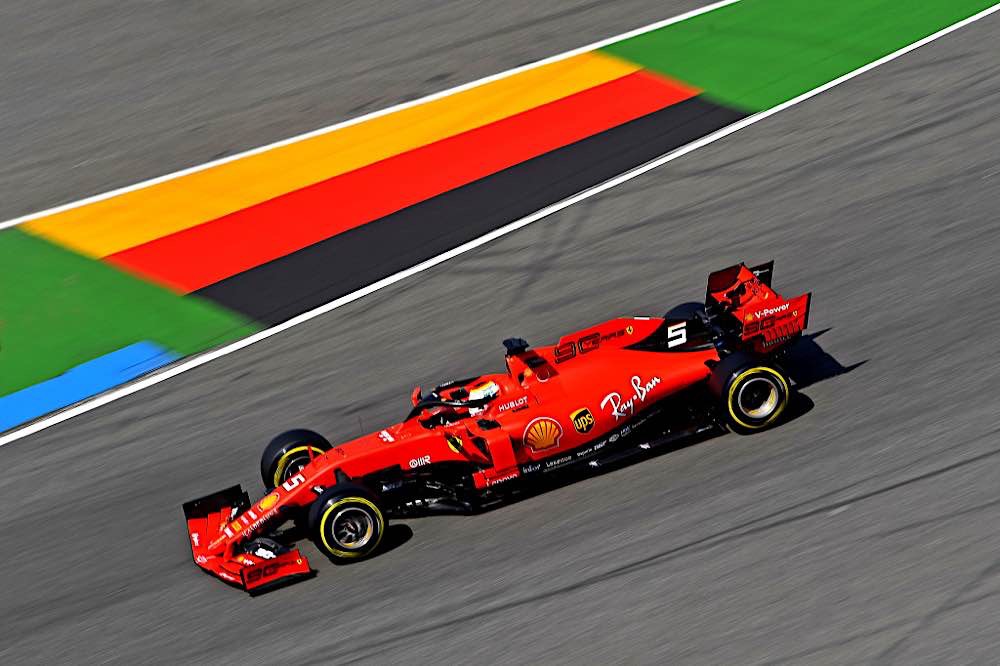 Seb was at home, and the flag welcomed him.

In the 70s and early 80s we used to have the odd bizarre race where small teams would surprise by getting an exceptional finish. Of course that could never happen now….or so we thought. The German Grand Prix proved us wrong. At the risk of spoiling the tension how does Lance Stroll in 4th sound? And a Williams scoring a point? But surely, we would have said, the days of disastrous pits stops and lamentable reliability are long gone? Oh no. Sadly. In short, Germany was a Comedy of Errors.

The first disaster took place as qualifying started. Seb’s turbo pipe came loose shortly after leaving the pits, which was disappointing to put it mildly. The only other Q1 surprise was Lando Norris failing to go to Q2, a battery issue necessitating a change which put him to the back of the grid. Charles Leclerc was second after Q2, so there was hope for Tifosi, which was duly dashed as Q3 started and his fuel pump failed. To make matters worse, Toto Wolf sportingly expressed his sympathies, which was undoubtedly well meant. (Really? – Ed). Hamilton did a good first lap for pole he could not later beat, and didn’t need to. This was despite symptoms of major illness, though with Hamilton anything would be major. Fortunately the threat of Ocon substituting in the Merc proved more effective for his recovery than Ibuprofen.

Verstappen had been behind Gasly in Q2 due to an engine issue, which was resolved enough to bag second. Team-mate Gasly wasn’t able to keep up and slotted behind Bottas for 4th. Only 15/1000th behind Gasly was Raikkonen in the Ferrari-powered Alfa. In fact, slots 5 to 10 were unusually filled by 6 different marques – behind the Finn were Grosjean (Haas), Sainz (McLaren), Perez (Racing Point), Hulkenberg (Renault) and of course Charles.

British club racers, used to being started after an out lap in all but monsoon conditions, might be forgiven for expressing surprise at 3 laps behind the safety car before the race started. Especially as in the race, the attrition rate was probably the same for the world’s best drivers as it would have been for mere club racers.

The first error of the race – and I say “error” because the editor won’t let me say “cock-up” – was Red Bull’s. Both cars bogged down, the launch control unable to manage a wet start. That Red Bull black box will be on Ebay on Monday then. The Mercs disappeared up the road whilst Raikonnen bagged third from Max. Gasly, grid position 4, was passed by the 6 cars behind him – including Charles Leclerc who finished lap 1 in 6th.

As early as lap 2, Perez spun into the barriers, though I can’t count that amongst the notable errors as it’s pretty normal. Seb (and Albon) took the opportunity to pit ahead of the safety car and took on inters. Others had to wait, and the opportunism proved a masterstroke for them both – by lap 8 Seb was up to 7th and Albon to 9th. This was getting interesting, especially as Charles was up to 4th, though he was released early and delayed Grosjean. Sensibly, the FIA fined the team rather than penalising the innocent Charles.

By lap 14 the insides of Ricciardo’s Renault ICU ( = engine) decided to see what the weather was like, the resultant oily blow-up adding to everybody’s grip woes and causing a virtual safety car. In a mirror image of the earlier safety car period, Charles benfitted by a well timed pit stop for new inters. In the drying conditions they were wearing quickly, and the new tyres allowed him to catch up with Raikonnen in 3rd. An easing of conditions and wearing inters led Magnussen (always a bit of an optimist) to try slicks, which seemed to work up to a point. Seb followed suit (softs) 2 laps later. Red Bull tried to go one better by gettting more endurance, but mediums on Verstappen proved impossible and he did a 360 without damage. Nonetheless, Charles had softs fitted during a VSC for poor Lando Norris’s engine failure on lap 25, which managed to put him into second and pursuing Hamilton. This could be good….until Charles had an off which the glass-like run off did nothing to arrest. We’re told circuit operators know what they’re doing, but that run off  simply does not fulfil its purpose. Charles hit the barrier hard and was out. Ironically, he hit a big Mercedes sign. The German company was “celebrating 200 GP starts”, apart from the fact that the GP team is really Tyrrell so have far more than that.

So with another big error under the belt the race threw another one in. Hamilton lost it on the under-temperature tyres, again hitting the Merc ad which I suppose shows dedicated professionalism. It was a soft enough impact to return to the garages for a rapid nose change. Too rapid a route for the officials though, as he went the wrong side of a bollard. The officials would apparently have found dropping carbon shards over the track much more acceptable, so he got a 5 sec penalty. Then the “rapid pit stop” is exactly what he didn’t get. With the mechanics dressed in 50’s style garb, and having been readied for Bottas, there was a comedy performance like an old-fashioned farce. The team were all over the place, running backwards and forwards with the wrong tyres and changing the nose at a glacial pace. As it’s the Mercedes-Benz Grosser Preis von Deutschland, “schadenfreude” springs to mind.

All these errors gave Verstappen the lead on lap 30, and apart from a tyre change lap he kept it to the end. Hulkenberg was second, Bottas demoted to third and Albon came through to fourth. It took Hamilton 3 laps to pass him, and in the end he dropped to 6th, but his forceful and mature drive in the wet must have helped the recent promotion to Red Bull to replace the hapless Gasly.

Hulkenberg had dropped to a still impressive 4th when that dreaded Merc sign beckoned again. In he went, and out came the safety car. Bottas made an attempt to get ahead of Verstappen at the restart with all the lack of success one would expect of him.

Several cars had come in during the safety car, including Seb. He dropped from 6th to 10th but rose to 5th and then 3rd as the leading cars came in for new tyres, their inters unlikely to last. Sadly, Seb had to come in too and by lap 48 he was down to 9th. This only seemed to motivate him, and he did masterful passes on Gasly, Magnussen, and Albon. A couple of laps later and Sainz came into view. A place was gained as Bottas, in pursuit of Stroll who got to third by simply doing everything not badly, went off into the wall, race over and – here’s a novelty – causing another safety car. Seb took Sainz in a surgical move for 4th on lap 60 at the restart, and then DRS’d past Stroll for 3rd. A podium from the back of the grid!

The safety car driver had a final outing when Gasly tried to pass Albon, and managed to lose the front wing together with his Red Bull career. Kyvat had, like Stroll, driven well and been well served by an efficient pit crew and strategy, and was at this point in a thoroughly deserved second. A touch of DRS after the safety car demoted him to a still worthy 3rd, while Seb and the team showed that despite the ultimate in set backs they won’t give up and can produce what seemed like a miracle, 20th to second.

In a race reminiscent of Long Beach 1983 when Watson won from the back of the grid, and Brazil 1981 when Ensign came a heroic 4th, the underdogs nearly triumphed. With Stroll 4th, ahead of Sainz, Albon, Grosjean, Magnussen, Hamilton and Kubica (yes – a point for Williams!), it was a topsy turvey race, and whilst it was an enjoyable piece of silliness, it’s unlikely to be repeated.