GRAND PRIX: Great Britain: Wish You Were There? 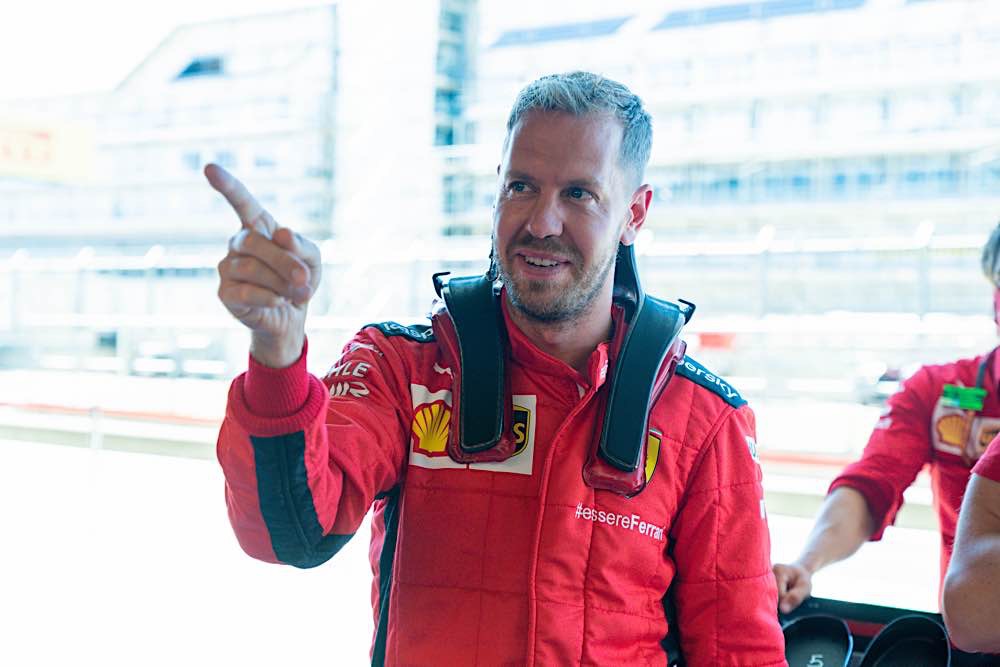 Thursday saw a happy, pointing Seb. Not seen much on other days. 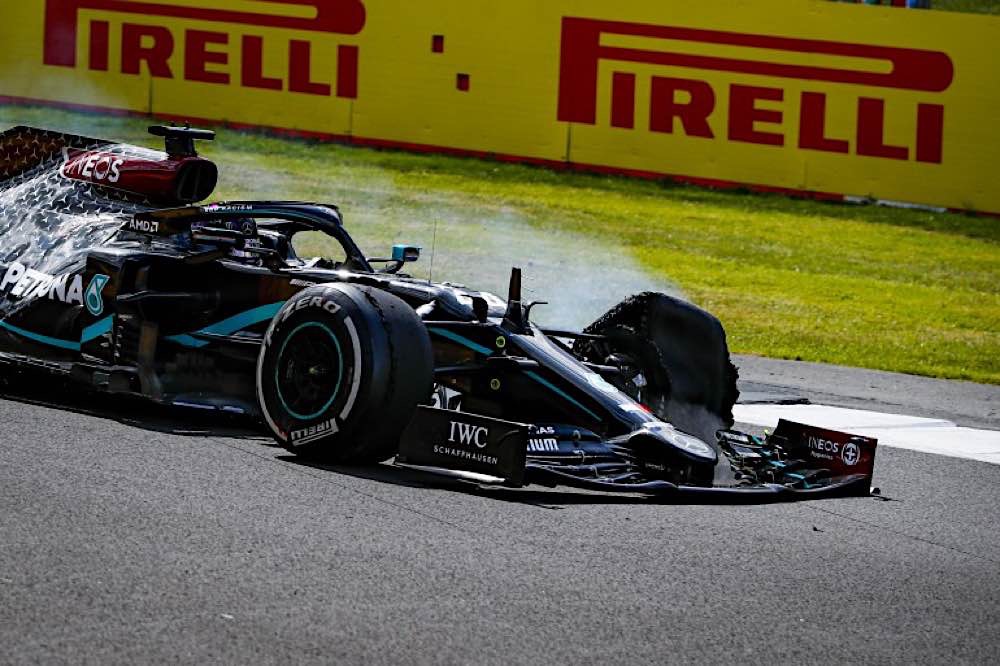 Race was defined by Hamilton's drive on 3 wheels. 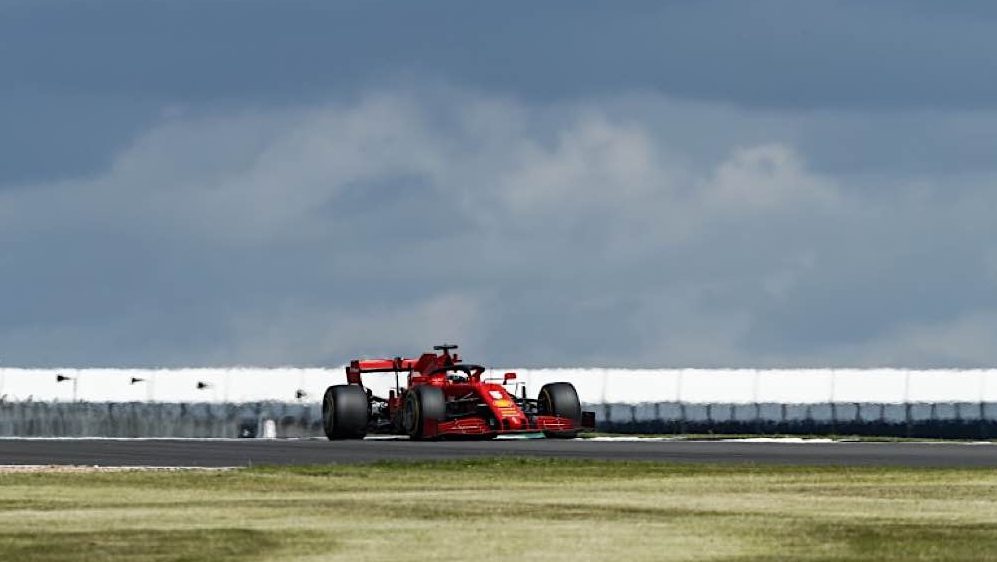 Flat and the threat of rain. Even zero spectators doesn't hide Silverstone's charms.

Like the rest of motorsport I would like to start by wishing “Checo” Perez a speedy recovery from his diagnosis with Covid, believed to have been contracted on a visit to his mum in hospital in Mexico. Racing Point invited old boy Hulkenberg back. He must have thought all his dreams had come true, and some commentators predicted a possible high finish for one of the most promising drivers of the 2010s never to achieve a podium.

Racing Point vying for a podium might be thought of as a fulfilment of the desire to have more lowly teams fighting for a near podium – Ensign in the 70’s and 80’s are the nostalgic example usually given, at least by Winston and myself. But in my opinion, we currently do have a mid-field team getting the occasional high placing by sheer determination and careful tactics. And it’s not RP, it’s Ferrari. When success is so closely linked to engine performance, I hate to say it but we are the underdogs, not really what I had in mind when I wished for an underdog over-performing.

Mattia Binotto confirmed that the team had developed “a lower than usual aerodynamic downforce configuration [and] worked a lot on tyre management”. This sounds quite radical, and may explain the concern Seb was showing in the practice sessions. After the race he said “I was struggling massively to find grip in this car ….. my confidence level is quite low at the moment, because I’m struggling to get a feel for the car and every time I try and push, I lose the car.” The lower drag helped Charles and Seb to be 8th and 12th fastest in the qualifying speedtrap at around 317kph, while Hamilton was fastest at 320kph.

It was sad but no surprise to see all four Ferrari customer cars out in Q1, along with the out-of-his-depth Latifi. Seb struggled into 10th in Q3, only 5/100 ahead of Gasly in the Alpha Tauri, and clearly unhappy with the car. Charles brought a bit of hope with a final qualification of 4th behind the inevitable Ham/Bot/Ver top 3. McLaren showed their return to form with 5th and 7th (Lando and Carlos), with the embarrassingly successful Stroll between them. The Renaults completed the top 10 in 8th and 9th.

Ferrari put out a press release which has two paragraphs headed “First 50 laps” and “Last two laps”, and that about sums it up, though for the independent observer there was also “Pre Race Disaster Time”. This applied to Racing Point and poor Hulk whose car, according to RP, suffered “power unit or gearbox issues”, a statement containing 100% truth and 0% information. It would take a hard man not to have  sympathy with Hulk for a dream dashed so cruelly.

At the start there was a bit of excitement as Bottas initially out-dragged Hamilton, but that was an aberration. More importantly, Charles outdragged Max, but he was back to 4th by the third corner.  A bit later, Magnussen was ahead of Albon but took a bit too much kerb, causing a slight lift. Albon took advantage of a gap which would have been there if the Dane had made space or vaporised himself, but the result was contact,  with Magnussen off at Club.  I can’t help feeling that Albon, having won the best seat of the “gang of three” (Albon, Norris and Russell) is now under too much pressure and so is trying too hard to please. He certainly failed to please the stewards who docked him 5 seconds, a penalty criticised for leniency by Haas’s Gunther Steiner.

After a few laps of the safety car, racing resumed until lap 13 when Kyvat went off at Maggots. An accident here is unusual, as it is normally a flat corner.  The Russian apologised profusely to his team after hitting the Armco – not a foam barrier – obliquely at an estimate of over 100mph. In a reverse of normal procedure, Kyvat blamed himself (adjusting the switches) and Alpha Tauri principal Franz Tost blamed a puncture. In the resultant safety car period nearly everybody pitted for hard tyres, which it was thought would “just” last to the end.

For the next 50 laps, Charles ran fourth while Hambotstappen occupied the first three places. Yawn. Seb had dices with Ocon and Gasly, dropping down from 10th to 11th, and briefly even 12th when the slowly recovering Albon passed. As one of my harsher friends said, rarely have so many engineering and financial resources been spent to be passed by Gasly in a Torro Rosso.

And then something happened. Those of us who survived the superb TV marathon of Canada 2011 enjoyed the unpredictable results from tyre issues so much that we asked for more unpredictability. We got our wish when F1 told Pirelli to make terrible tyres, or “high degradation” as they called them. On Sunday, the degradation was a bit too much. In a rare move, Hamilton hadn’t grumbled about tyres, but 3 laps from the end his team-mate Bottas suffered a failure, putting him out of the points. Charles was promoted to third as a result.

Seb got a double promotion to 10th and the last of the points when Sainz also suffered tyre failure. But the big one was to come. On the last lap Hamilton’s front left tyre also went. Fairly clearly, the Mercedes geometry was closer to the limit than others, and that comment by Mattia about tyre management sounds as though Ferrari made a wise choice. In a last minute that was very tense for different reasons depending where you stood, Hamilton eased the three wheeler car round for the win. On the previous lap he was 34 seconds ahead of Max, at the finish 6, with Charles only 5 seconds behind Verstappen. He made the very best of difficult circumstances and continues to cement his position as a fighter – even an opportunist- for the Scuderia. There were mixed thoughts for Max as he had taken new tyres to get fastest lap. Without that would he have passed Hamilton for the win, or would he have been behind Charles with tyre failure?  Ricciardo, Norris (with a few of his trademark overtakes in the bag), Ocon, Gasly and Albon filled the spaces between the Ferrari men.

Pirelli’s later explanation might be cynically summarised as “the cars were very fast and 40 laps was a long way to go”, which sounded a bit odd as the cars are about as fast as expected and although it’s a long stint, there was no earlier warning about longevity.

We had a race where many wishes were granted but with disappointing results: Hulk got to return to F1, but he didn’t; Albon got to drive for a top team, but he’s stuggling; we got to see a midfield team bravely overachieve onto the podium, but it’s Ferrari; we got unpredictability courtesy of the tyres, but it’s helped make the season even more predictable. Nonetheless, I still wish you all the best until same time, same place next week for the Formula 1 70th Anniversary Grand Prix. Because you can’t have enough Silverstone.