GRAND PRIX: Hungary: Not Out of the Woods Yet 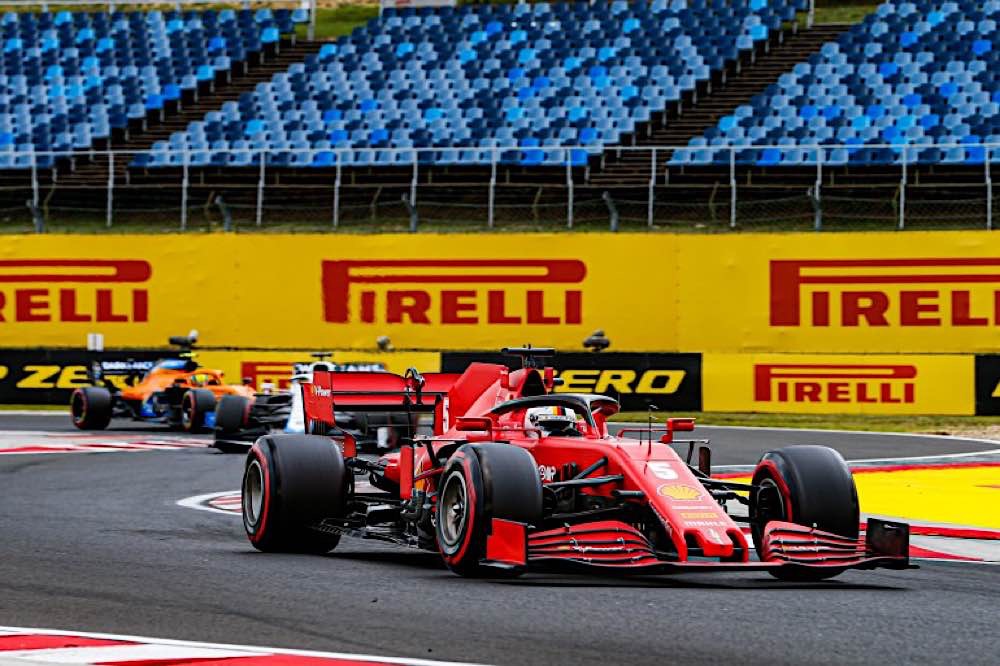 Seb in front of empty grandstands at the normally well supported Hungaroring.

Moment of the weekend as Verstappen hits the wall before the race. 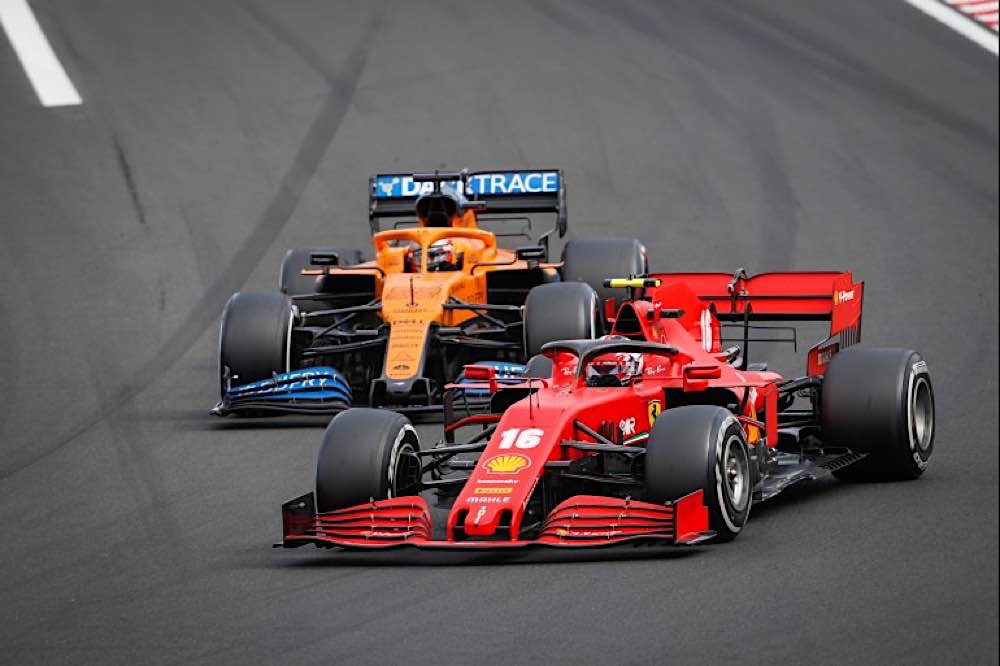 Exciting dicing between Charles and Lando

Last Saturday’s qualifying had a shadow over it for me. One of my heroes, Ron Tauranac, passed away aged 95 on the previous Friday. He was, of course, the designer behind production Ralt formula cars and before that Brabhams up to 1972, winning the 1966 and 1967 F1 championships along the way. Ron was a straightforward, but in my experience of speaking with him on several occasions, a humble, courteous, highly competitive and (with genuine questions) a surprisingly patient man. His cars were always well engineered, safe (by standards of their day) and eschewed gimmicks. As a result they tended to finish reliably, which helped their championships. At 95, Ron had only recently stopped taking an active part in professional motorsport. Whilst there’s no doubt that the brain is a bit slower as one ages, it does store up experience, which often compensates.

It might be the idea of a wise old head that caused Ferrari, according to reports this week, to bring back the 76 year old Rory Byrne to oversee the design of the 2022 car with an advisory role on this year’s car. Byrne was, of course, responsible for the F399 to F2004, years when these reports generally consisted of the words “Schuey won again, not much else happened”. So he has a great pedigree, and it must be hoped that he can make a difference. At the same time the team has implemented “a chain of command that is more focused and simplified and provides the heads of each department the necessary powers to achieve their objectives”. So that’s all good then, if as I believe the meaning is “get on with it and stop arguing”.

Rory does, of course, go back much further. He first came to the fore as the “designer” of the superb Toleman TG280 F2 car. I put designer in quotes, as Ron Tauranac was fairly clear that he thought of it as a development of his own RT2 F2 car. But where does a copy start and inspiration end? Well that’s a debate that Renault (who started out as Toleman) and Racing Point are currently having. The Enstone based French team have now twice protested the brake ducts on the RP20. The argument is that they are too close to the 2019 Mercedes design to not be copies, and that because the clever bit is internal, it cannot be photographed. It came as a surprise to me that engineering software and metrology is so good these days that good photographs can be used to reverse engineer (a polite euphemism for “copy”) most external components. So did Mercedes give away their duct design? Or did a transferring designer take information with him? Or was the same solution arrived at independently? It seems hard to believe that Mercedes would openly help a rival, albeit a customer, but who can tell. The parts have been impounded by the FIA and a decision will be announced imminently.

The engine ranking was made abundantly clear in Q1. Williams, whose entire car development budget would just about fill my Golf with diesel, have a Mercedes engine and hence were through to Q2 while four Ferrari powered cars (Haas and Alfa) were out. To add to our woes, Charles and Seb were slowest through the speedtrap at 303 and 304kph, while Stroll and Perez were on 314/313kph.

The presumed aero drag that the team took helped them to 5th (Seb) and 6th  (Charles), behind the inevitable Hamilton pole with Bottas 2nd and the Stroll/Perez duo next. It was a surprise to see the red cars ahead of Verstappen (7th), as the supposed Red Bull aero advantage was expected to be a feature of Hungary.

It would be unfair, but true, to say that the most exciting parts of the race happened before it started. Verstappen locked up on the out lap and deranged the left front corner. In just over 20 minutes the car was driven back to the grid, the corner fixed and with a few seconds to spare, it was on the grid. The discipline of the mechanics,  the planning that must have been in place to have the parts ready for such an exercise, and the precision manufacture that meant they went on without need for extensive adjustment and set up, says a lot about F1 in general and RedBull in particular.

The second excitement was because it started out damp and was declared a wet race. Haas had the great idea of starting in the pitlane and changing to slicks. Sadly they discussed it over the radio which isn’t allowed before the start so were penalised 10 seconds, resulting in Magnussen and Grosjean each dropping a place to 10th and 16th. Kyvat was correctly not answered by his team, started on inters and finished 12th. However, the Haas boys ran 3rd and 4th for 10 laps after the initial pit stops, whereas Kyvat in an arguably faster car was 13th, so it seems to be a gamble which worked.

As the lights went out, Bottas had already moved, then stopped. Whether he jumped the start is debatable, though the stewards felt no need to investigate. In any event, he was overwhelmed and was soon down to 6th. Charles was momentarily up the field, then joined and passed by Seb, but the Mercedes power overcame them and they were soon down to 4th and 5th, complicated by early (laps 2 and 3) pit stops to change to slicks. Pitlane traffic severely disadvantaged Seb, his total pitstop time being 28.3s against a norm of around 23. However, at least he didn’t suffer the indignity of Latifi, released into the path of Sainz which caused a puncture, and then having to return to the pits on the rim and take a 5s penalty.

After a mid race pit stop where Stroll lost out to Bottas, the order was established as Hamilton, Verstappen, Bottas, Stroll, which it remained until the end. It hurts to say it, perhaps Stroll does have a modicum of talent… [I don’t think so – Ed]

Despite many pit-to-car warnings of “rain in 10 minutes” it never came to any noticeable extent, and the excitement of wet pit stops was denied us. The race was livened up a bit by some good dicing between Charles and Lando on laps 32 and 33. The cars were close and in the hands of amateurs disaster would have ensued. In the hands of these men, it was a delight to view, especially as Charles won on this occasion, but as Charles finished 11th and Lando 13th, it was very much a sideshow.

Albon made a better case for retention this week, with 5th, though at 78 seconds behind the leader it was scarcely tight racing. Seb completed the top 6, but was the first man lapped, the ultimate indignity of being lapped by rival Hamilton.

After a hectic start to the season we now head for a summer break of a week and will resume at The Home of British Motorsport, Silverstone.