GRAND PRIX: Hungary: The Scriptwriters have gone too far 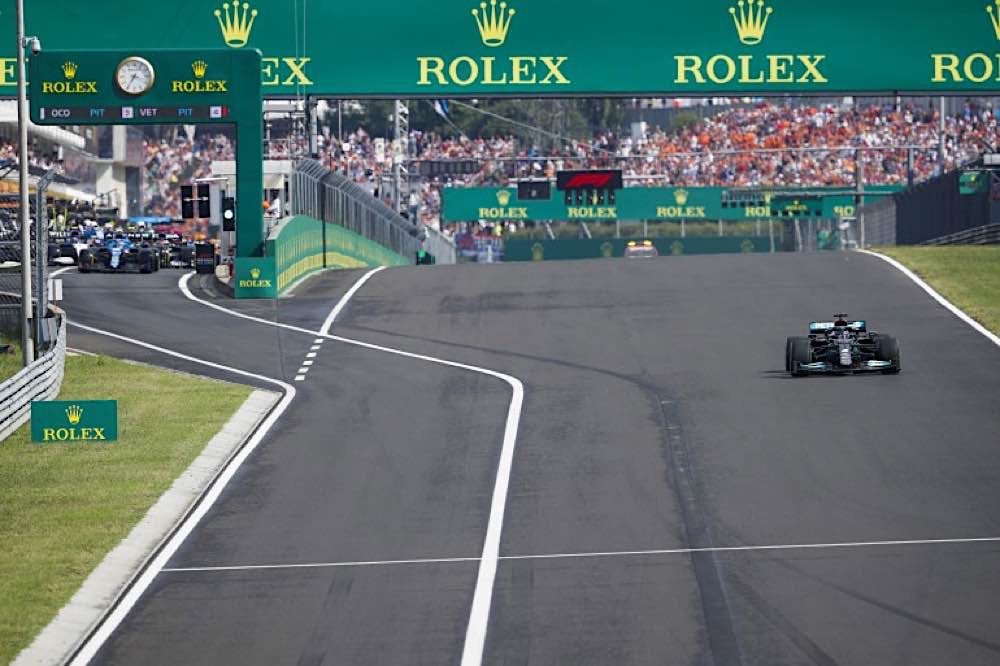 A grid of one. 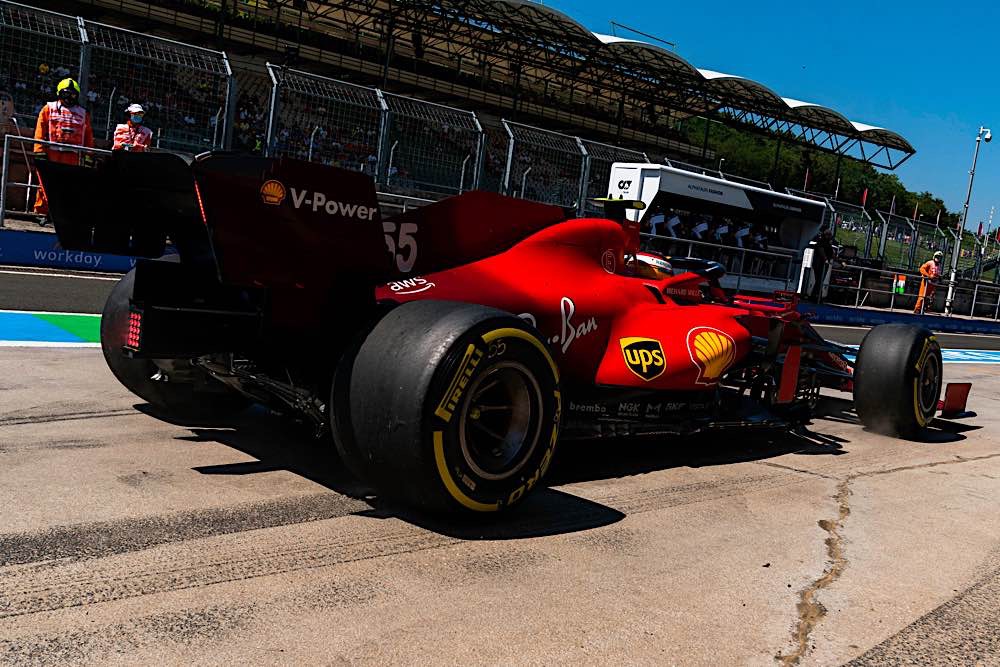 A third was ultimately surprisingly disappointing. 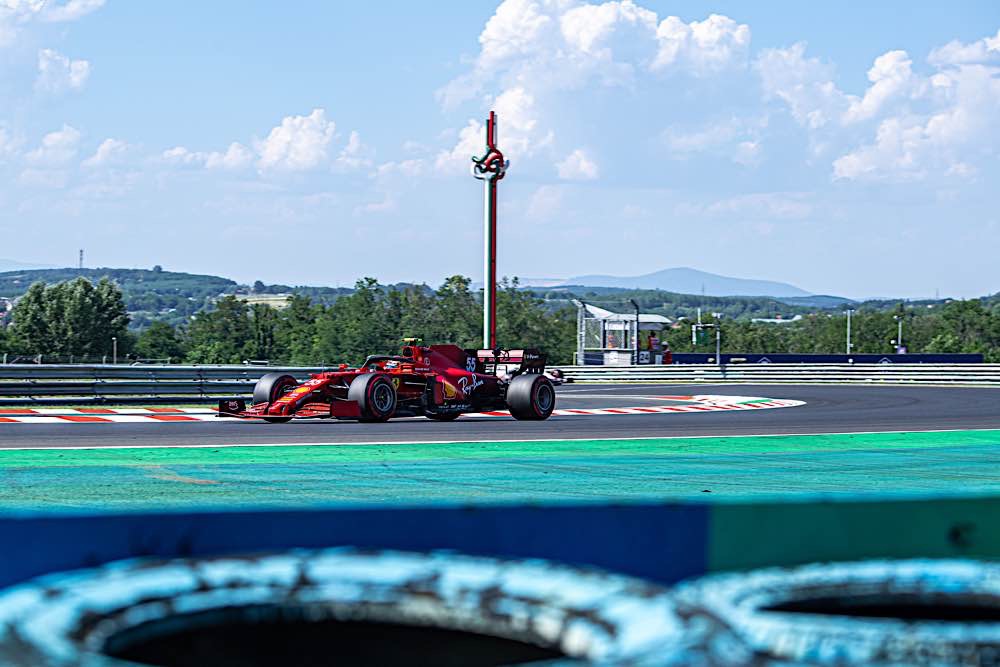 The circuit's appearance is not promising;

For many of us, a highlight of the year is the Silverstone Classic. Having sold a kidney to pay for the ticket, I attended on Friday, and if I may briefly digress from the subject of this report I was pleased to recognise so many ex-FOC Hillclimb Championship drivers participating with great success in the historic races. It was also good to see the sportsmanship and intelligent driving in the races and the valiant way the teams dealt with adverse weather. It was also traumatic for me to walk to the spectator banking during a “Classic Car” cavalcade and see a 1980’s Vauxhall Cavalier on track. That would surely be the most unexpected sight on a racetrack over the weekend. Well, it wasn’t when I watched Hungary. Not by a long way. Sportsmanship, teamwork and weather did play a big part alongside the unexpected, as did both the presence and complete absence of intelligence in the driving.

Hungary is sometimes described as  “Monaco without the buildings”. It’s quite tight and so a mechanically good, driveable car can be better than outright power and aero, which gave cause for optimism in the Ferrari camp.

Q1 had a ripple of surprise as George Russell failed to reach Q2, and it was also a bad weekend for Mick Schumacher, allowed to join at the back of the grid despite not qualifying after a big off in FP3.

But as Q2 started, there was a huge disappointment. A freak gust of wind caught Carlos, reducing downforce and sending him off into the barriers, sideways, reminiscent of Charles’s Monaco incident. He would start 15th.   Things weren’t much better for Charles, 7th being disappointing after showing some promise in practice. However, 7/100th off Perez in fourth and the now established cliché of “better in racing than qualifying”  did give cause for mild optimism. Lando was just in front of Charles, and “better in qualifying than racing” Pierre Gasly was 5th. The top 10 was completed by the two Alpines and Vettel, which was really only of interest to midfield racing enthusiasts. Supposedly.

The front (Hamilton, Bottas, Verstappen and Perez) was subject to a little controversy. As the fastest four set out on their final Q3 run, progress down the pitlane and around the track was glacial leading to Perez missing the run. On TV it looked as though  the Mercedes were deliberately holding up the RBs, and it led to booing from the Orange Army as Hamilton was awarded the pole award. However, much as it hurts me to defend the 3 pointed star, a glance at the qualifying table shows that the time for Verstappen (the only one of the quartet to improve) was recorded at 16:09:14. There were two Mercs in front of him, and Ocon’s time was set at 16:08:54, 20 seconds earlier. So three cars in 20 seconds doesn’t seem too bad to me; maybe the Mercs aren’t as bad as I thought, and the fault lies in the stupidity of everybody dawdling round the track before a run. If only we could just have some straightforward racing.

The FIA excel in their project to prove themselves out of touch with reality. Before the race Vettel and others wore a T shirt to support gay rights, appropriate in Hungary with regressive legislation. The FIA are apparently fine with human rights as long as it’s choreographed and doesn’t obscure sponsor logos. Seb forgot to take off the shirt as it rained, presumably he was thinking more about racing in the wet, so was reprimanded. Others, such as Bottas and Stroll didn’t trouble their little brains with thinking about the wet. Or anything else for that matter.

The race started in “proper” wet conditions with the field on intermediates – not ideal. As expected Verstappen (plus Norris and Perez) outdragged Bottas while Hamilton drove away. Not only did Bottas then misjudge his braking, he showed little evidence of doing any at all and threw Lando into the air, from where he cannoned like a snooker ball into Verstappen. The amount of damage to Max was evidence of the force of Bottas’s hit. Not content with taking out Max, Bottas then assaulted Perez. It was almost as if he’d been instructed to destroy the RB’s by an evil genius in charge of his team, but such a thought is clearly absurd.

However, if there was a prize for the worst piece of driving at the start, Bottas wouldn’t have even been a close second. Stroll, starting 12th, had a superb start courtesy of the usual mechanical qualities of the chassis. The in-car video is like a video game, he just continues as if he’s unstoppable, with some success but the inevitable disaster when he reaches a solid object. Sadly it was Charles that he smacked into, who was taken straight out and joined the scrapyard.

In club racing, both Bottas and Stroll would have had the book thrown at them. Followed by the bookcase and the Amazon warehouse. F1 is different. They both received a 5 slot grid penalty. As for the innocent parties, not only did Charles lose a potential podium but the engine was irreparably damaged. Not only a financial consideration but potential grid penalties if a fourth ICE is required. Justice? There are similar penalties for the equally innocent RBs.  It’s almost as if Mercedes was run by an evil genius.

After a red flag and best attempts at repairs there was a formation lap after which everybody but Hamilton went into the pits for slicks, leading to the comical sight of the grid being just Hamilton. Meanwhile in the pits, anarchy ruled. Unsafe releases were the rule rather than the exception, with Ferrari suffering at the hands of Williams and Alpha Tauri. Alfa released Raikonnen into Mazepin, removing his wheel. The “penalty” was a 10 second time which had no effect on the race. Williams and Alpha Tauri were unpunished.

At the end of the first lap, Hamilton came in for slicks, so was dead last. In effect we had a random grid race, with the lead held by Estaban Ocon, followed by Sebastian Vettel. A case of right place, right time for them, but nobody can take away the effort that they put in to keep those places, which they did to the finish. Whilst I’m not an Ocon supporter, the smile and the sheer natural joy on his face after the race was infectious. Even a grumpy accountant can begin to shed a tear…

The real story of the race came well behind the top of the podium. Carlos spent until lap 22 behind Latifi and Tsunoda, and credit to them for their defence, but it effectively robbed him of a podium – perhaps even a win? The fight with these two resulted in a compromised tyre strategy which meant that after running 3rd from when they pitted (tyre stops excepted) by the time Hamilton challenged him, Carlos was running on hards that were 15 laps older. The result, four laps from the end, was inevitable; the Brit passed Carlos for 3rd, so the Spaniard ended in 4th place. For Ferrari, it was another “what might have been”, which is an improvement over some recent results.

So how did Hamilton get to challenge Carlos? Whilst not a fan, I cannot but have huge admiration for one of the great drives of F1. From the back (14th) he passed some on pit stops, but, admittedly helped by DRS, made clean, effective, and sometimes brave passes on the rest.  Clever strategy gave him new tyres on laps 20 and 44. The early stop allowed him to pass his championship rival who had earlier gone in for new tyres. Sadly for race fans, the Bottas damage to the RB was too much for even RB mechanics and Verstappen’s driving to overcome and the damaged Dutchman was eventually nowhere, finishing 10th on the road.

I cannot recall the last time I’ve enjoyed a battle as much as when Hamilton came up to Alonso in 4th. Rarely does one see pure racing in F1, but this was it. Hamilton was all over the Alpine, but Alonso seems to have a sixth sense and consistently placed the car in the wrong spot for Hamilton. On one occasion he deliberately slowed at the apex to remove Hamilton’s slingshot. Never dirty, it was just wonderful to watch.  At 40, he’s old enough to be some drivers’ dad, but nobody could have defended better. The icing on the cake was Hamilton on the radio. When he begins a radio message with “Man…” you know he’s flustered, and on this occasion he complained that Fernando was defending at 180mph, and those speeds were dangerous. Oh, the delicious irony! New underpants for the laughing Mr Verstappen, please!

On lap 65, the inevitable happened and a minor error by Fernando let Hamilton past, but the work had been done and Hamilton had been held off for 16 laps, admittedly not all fought out. This meant that even fresh tyres and a superior car weren’t enough for Hamilton to attack Vettel (2nd) and Ocon (1st). Alonso had won the race for his team-mate, the sort of sportsmanship and teamwork one expects more at Silverstone Classic than a GP, though of course one suspects that Fernando did it because he enjoyed it and had the best time he’s had for years.

Mr Reliable Pierre Gasly came in 6th ahead of team-mate Sweary Tsunoda and, almost un-noticed in the excitement, two Williams were in the top 10 (Latifi and then Russell).

After one of the most enjoyable races I can remember (though obviously I would prefer a boring Ferrari walkover..) the FIA decided that giving weak, almost meaningless punishments for dangerous driving of a distinctly sub-club racing standard didn’t quite achieve the loss of credibility they were hoping for. So they stripped Vettel of second because they could only take a 300ml fuel sample. Let us now be quite clear. The fuel was not illegal, there may well have been enough to test, Vettel could have stopped after the line, and their team might have been able to get a litre out of the car but the rules say the sample must be pumped out without any dismantling. In all, a badly drafted rule slightly spoilt a great race. On the positive side, Carlos was upgraded to third.

The story of this race belongs in bad movies. It was gladiatorial, exciting, unexpected and thoroughly enjoyable but that only arose because of two stupid accidents and some doubtful pitlane tactics. Can the authorities please not bow to the inevitable suggestions of partially reversed grids – this is the pinnacle of the sport, not touring cars.  That said, even with a Ferrari only 3rd, I am still smiling.