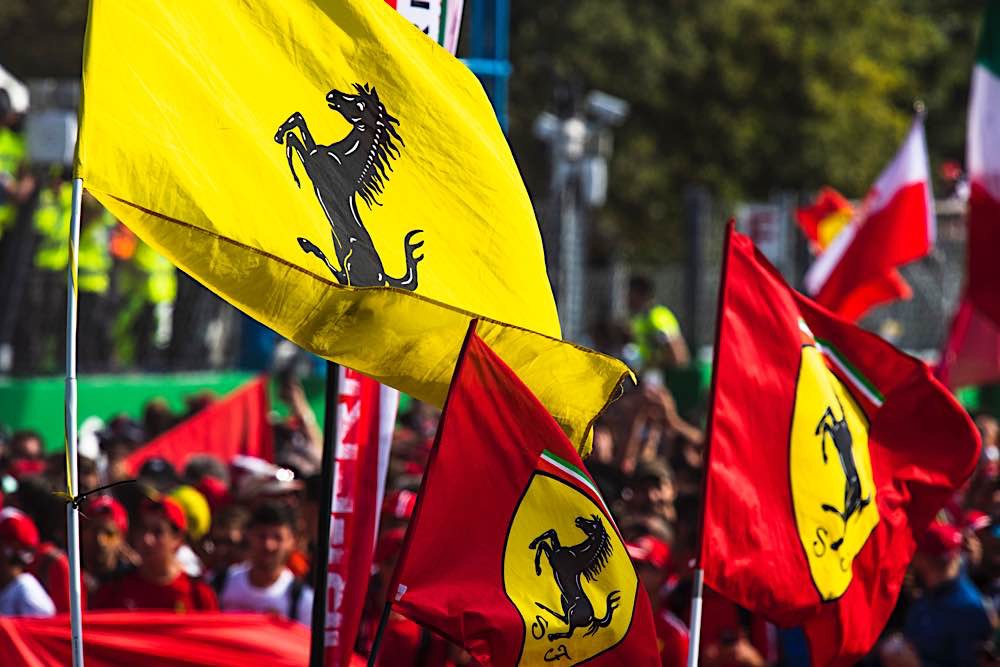 The Tifosi add a unique atmosphere to Monza 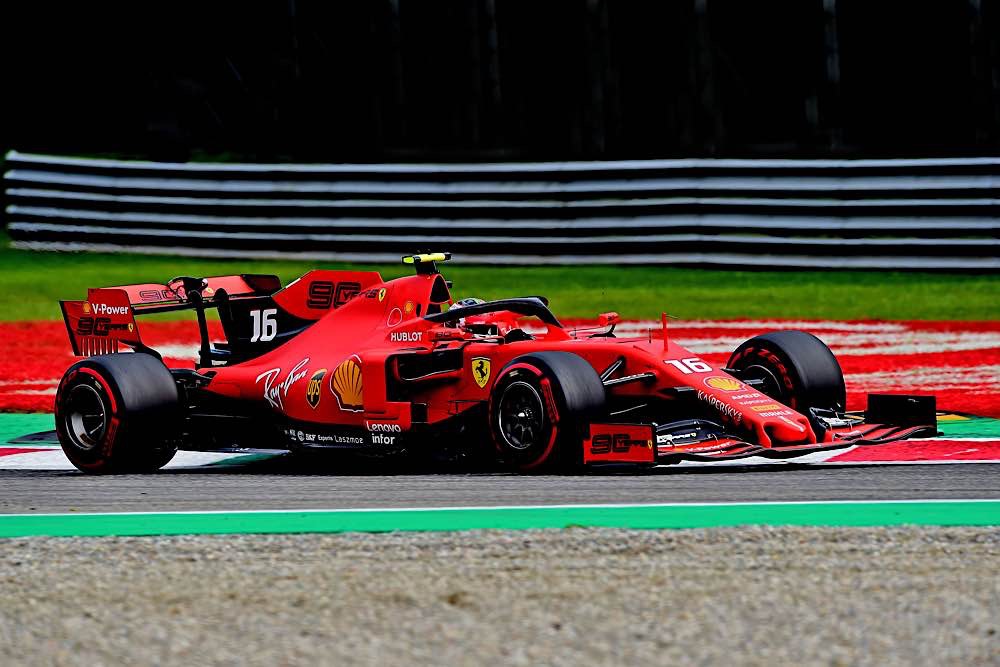 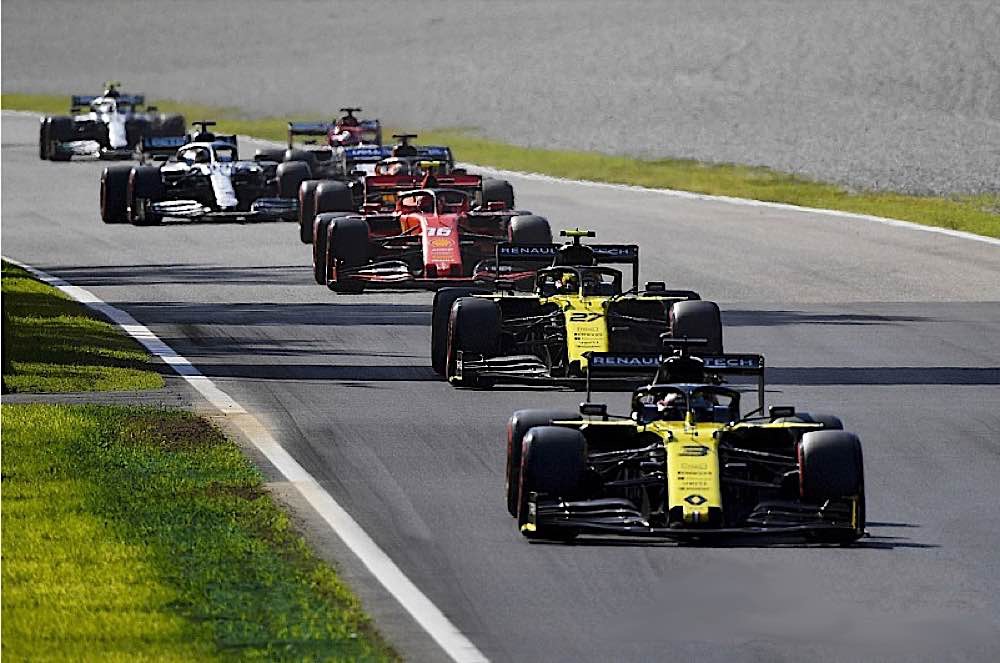 Q2 "waiting for a tow" made everybody look silly

The GP circus descended on Monza five days after leaving Spa, with the Italian fans full of expectation of a repeat victory for Ferrari and its 21-year-old star Charles Leclerc; that Charles delivered for the Tifosi at Monza for the first time since 2010 is only one of the highlights of an extraordinary Italian GP.

With the Monza circuit requiring a similar low downforce set up to Spa predictions of a similar result for Ferrari commenced once the Chequered Flag had heralded Leclerc’s debut GP victory in Belgium. Friday practise confirmed such predictions as after a damp first session Leclerc headed the pack, repeating the result in the more representative principally dry afternoon session, backed up by Vettel being within 0.2 seconds of Charles’ best time. Unfortunately all the 6 ‘ Division 1 cars’ were also within 0.6 seconds of Charles so Ferrari domination for the weekend was unlikely.

Saturday dawned a little warmer, with FP3 ending with Vettel leading the pack, but the intensity of competition meant the top 14 were within 1 second of his fastest lap, suggesting qualifying could be very close.

Qualifying soon sorted the top 10, with one notable absentee being Max Verstappen, as Red Bull opted for an engine penalty to allow them to run a new engine at Singapore, where they anticipate they will be more competitive.

The initial runs for the top 10 progressed with little drama, with Vettel towing his younger team mate to the fastest time, closely followed by the Mercedes pair. Second runs then descended F1 into a farce, or as one journalist commented ‘Carry on Qualifying’ as 9 cars competed to be last over the line in order to maximise the tow; unfortunately despite radio warnings from the pits, the drivers seemed oblivious to the session ending, so only 1 driver managed to set a time, and that was Carlos Sainz who had no teammate from whom to gain a tow! The result meant Leclerc remained on pole, with an unhappy Vettel in 4th as the anticipated/planned tow from Charles ‘timed out’.  Q3 also witnessed Vettel being reported to the stewards for ‘all 4 wheels off the track’ on the exit of Parabolica, but thankfully sense prevailed and no penalties resulted. So for the second Italian GP in a row Vettel did not deliver, a repeat of him being outqualified by Raikkonen last year, which some say led to his erratic race the next day.

Sunday dawned dry and sunny with a close race anticipated, with Mercedes perhaps favourite based on their long run pace on Friday. A largely clean start led to the anticipated Leclerc, Hamilton, Bottas running order after lap 1, with Vettel down to 5th after an aggressive overtake by Hulkenberg in the Renault. Seb soon re-established 4th, but in trying to close the gap to Bottas managed to spin at the second chicane on lap 6. His error was then compounded by a desperate return to the circuit which forced Lance Stroll off the road and led to an immediate pit stop for new ‘hard ‘tyres. Thus by lap 7 he was running in 19th place, and worse was to follow as the stewards considered his return to track dangerous with a 10 second stop/go penalty being applied, and served at the end of lap 12. Thus by lap 13 Ferrari’s number 2, Leclerc, continued to lead the race while Vettel, the experienced number 1 and the team’s chosen leader at the start of the season was languishing at the back.

At the front Leclerc was managing his 1-2 second gap to Hamilton, his soft tyres helping to maintain traction out of Parabolica and thus offsetting any assistance Hamilton was gaining from the slipstreaming /DRS effect into the first chicane. The DRS was not having its normal effectiveness due to the minimal size of the rear wing run at Monza, with ‘experts’ suggesting the normal 13mph increase at most circuits being reduced to 5mph at Monza. The leaders however soon needed to stop for fresh tyres, and while Hamilton chose the ‘Medium’ compound, Ferrari chose the ‘Hard’ a choice influenced by the times being set by Vettel on the same tyre. The question now was whether Charles could continue to hold off a charging Hamilton for the remaining 34 laps; the answer was swift as within 2 laps of his pit stop Leclerc was slightly held up in passing a yet to stop Hulkenberg at the Parabolica, which allowed Hamilton to pounce by the time they arrived at the second chicane; thankfully Hamilton was on the outside and Charles used all his racecraft to assist the Mercedes in using the escape road, allowing Leclerc some breathing space for a few laps.  The respite however was not long and continued Hamilton pressure led to Charles locking his brakes into the first chicane on lap 36, with Hamilton mounting another attack into the second chicane, which Leclerc again robustly defended.

Hamilton continued to hound the Ferrari but by lap 41 his tyres were past their best, a slight mistake leading to use of the 1st chicane run off area, allowing Bottas into second place and on tyres 7 laps younger than those on the Ferrari; the Finn managed to close right up to the Ferrari, but no serious overtake was attempted, helped by Charles managing his fastest lap on lap 47, on tyres 28 laps old – well done Pirelli!

So at the end of 53 gruelling laps Leclerc won his second GP in 8 days, by less than 1 second from Bottas. The average gap between 1st and 2nd for the whole race (excluding pit stops) was 0.951 s, emphasising the scale of Charles’ achievement as the Mercedes team threw everything at continuing their winning streak in Italy. As a result, Charles is now in 4th place in the drivers’ championship, only 3 points behind Verstappen who had another disastrous first lap but finished 8th.

While the Tifosi has a new hero, Vettel completed his race in 13th place, passing George Russell in the Williams on the last lap. For a 4-time World Champion the result is not good enough for the Scuderia, emphasised by Mercedes taking more manufacturer points from Spa/Monza than Ferrari even though Charles won both races! Seb’s 39 race wins for Red Bull must seem a long time ago as he concentrates on achieving his 53rd Grand Prix victory, not helped by him racing with 9 penalty points for the next few races, and thus in danger of a one race ban. At least Singapore is next, a circuit on which he normally excels.

Behind the Ferrari/Mercedes duel Renault achieved their best result since their return in 2016, with Ricciardo and Hulkenberg managing 4th and 5th, albeit 45 seconds (or nearly a second a lap) behind Charles. Is Daniel a potential Seb replacement at Ferrari, if, as some speculate, Vettel retires at the end of the year? Some say Ricciardo’s contract allows movement to Mercedes or Ferrari if either come calling.

The remainder of the top 10 comprised Albon in his second race for Red Bull, Perez, Verstappen, Giovinazzi and Norris. Special mention must be reserved for Giovinazzi, as his 9th place is his best F1 finish to date and in his home Grand Prix; after his last lap mistake at Spa the result must be a relief.

Of the other Ferrari engined cars Raikkonen had a poor meeting with the Alfa, crashing in Q3 which led to a pit lane start for the race; unfortunately, the team considered a pit lane start meant a free tyre choice, but apparently this applies only if the chassis is changed, hence Kimi served a 10 second stop/go penalty in the race and finished 15th. At least he beat the remaining Haas of Romain Grosjean who had two early race incidents, while Kevin Magnussen retired through ‘hydraulic issues’.

The Haas team, currently 9th in the Constructors Championship have been a poor shadow of the 5th place they achieved last year. Their title sponsor ‘Rich Energy’ finally ended their controversial sponsorship deal in Italy, being no doubt one less worry for the season; perhaps Aldo Costa joining their chassis supplier Dallara from Mercedes (and Ferrari) will help in the medium term ?

So the European F1 season for 2019 ends, with Ferrari in a firm second place in the Constructors championship 85 points ahead of Red Bull with 7 races remaining, and Charles in 4th place in the drivers with 2nd a real possibility; roll on Singapore.