GRAND PRIX: Italy: Who would have thought…. 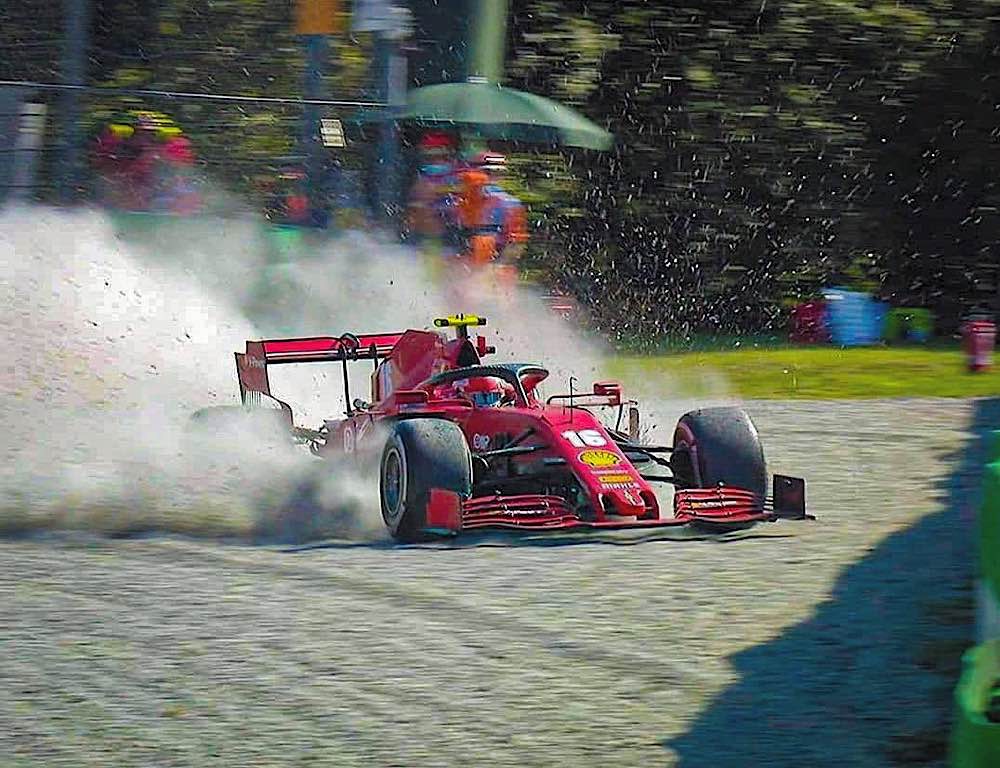 An uncharacteristic mistake for Charles. 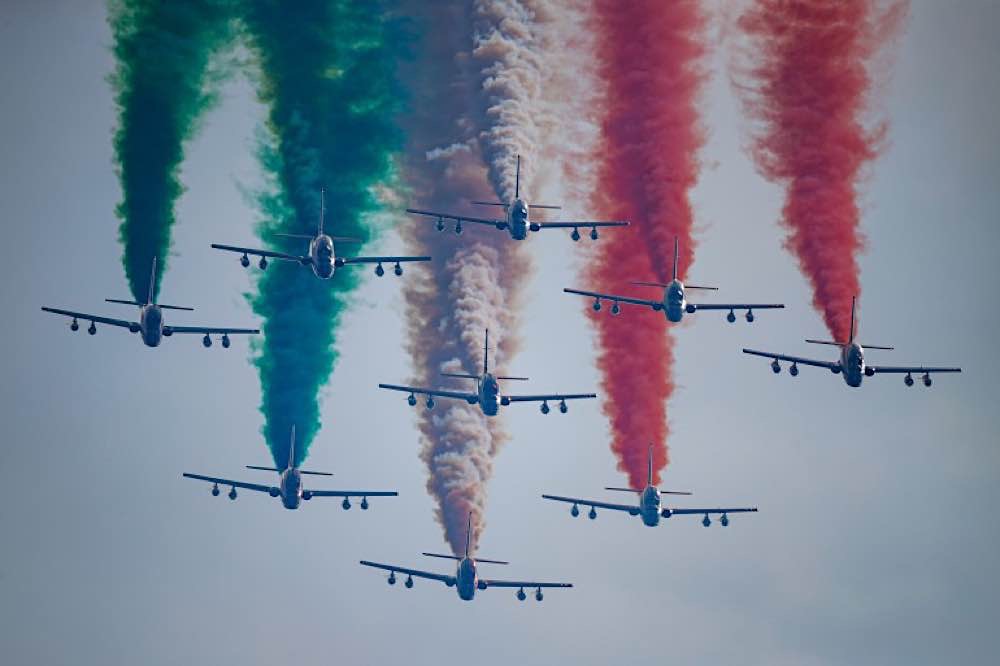 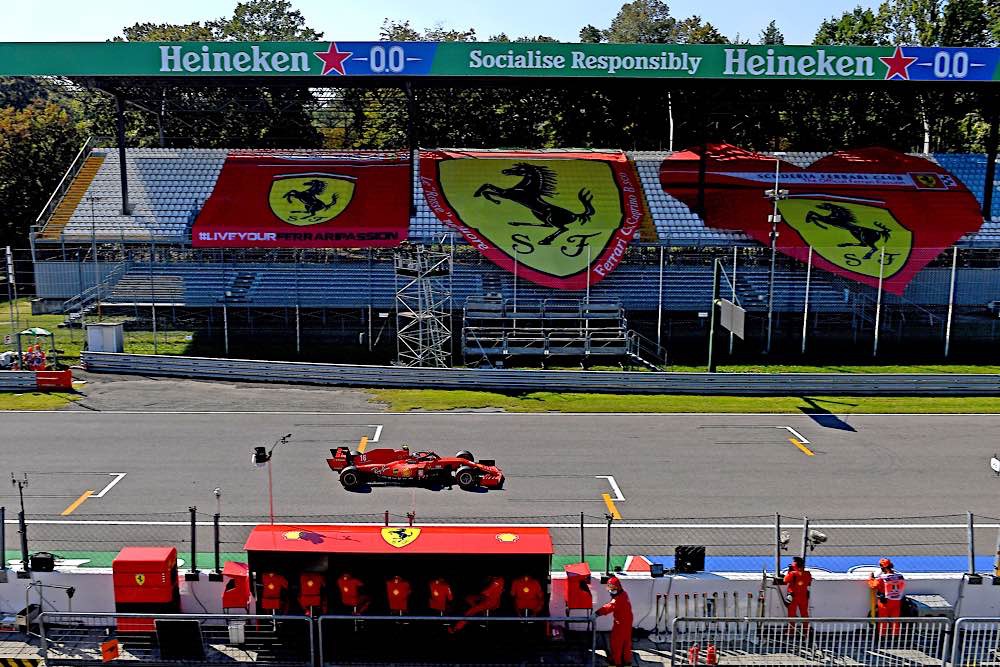 Report by Tony Cotton, based on Ferrari Media

In 2008 Seb won at Monza in a Ferrari engined Torro Rosso. This year, with Torro Rosso morphed into Alpha Tauri and with a Honda engine, Pierre Gasly won from 10th on the grid. He was definitely helped by circumstance.

Start. When the lights went out, Charles stayed 13th while Sebastian lost a place to George Russell in the Williams, but he got it back on the following lap. However, on lap 6 his SF1000 had a dramatic brake problem, which meant he had to retire on the next lap.

Safety-Car. On lap 18, Charles pitted to switch from Soft to Hard tyres, rejoining in 17th place. On the next lap, Kevin Magnussen had to park his Haas at the side of the track with a power unit problem, just before the pit lane entrance. Gasly pitted, and then a safety car was called. The red light for the pitlane was not in the most visible of places and as a result Hamilton missed it. He pitted for new tyres and to incur a 10 second penalty.  Most of the rest of the field pitted on re-opening, resulting in Gasly becoming third behind Ham and a non-stopping Stroll. Charles thus found himself sixth. At the restart, Leclerc was on a charge and passed the Alfa Romeos of Kimi Räikkönen and Antonio Giovinazzi to move up to fourth. Unfortunately, on the next lap Leclerc lost control of his car, crashing heavily into the barriers at the Parabolica corner. It was a frightening accident, but fortunately, Charles was not hurt. After a brief safety car, the race was stopped.

After the restart, Stroll went wide, though later recovered to third, and Ham took his penalty, leaving Gasly in the lead. Sainz chased hard and was disappointed to be “only” second. Alpha Tauri, McLaren, Racing Point must surely be the most interesting podium for some time.

Charles Leclerc #16
“It was a very difficult race and I struggled quite a lot with the balance. I thought at first we were unlucky when the safety car came out, but due to the fact the pit-lane remained closed, we were actually pretty lucky. We were in a very good place at that point, but I was struggling a lot on the hard tyres. I tried to push but then I made a mistake, lost the rear and crashed at Parabolica.
The crash was quite a big one but I am ok. A bit of pain here and there, which is quite normal.
We have had two difficult weekends for the team, but it’s like this at the moment and I hope we can bounce back, so I am looking forward to Mugello.”

Sebastian Vettel #5
“This is a very difficult moment for the whole team and as part of it, I am suffering along with everyone else. But this is our reality right now and we need to try and do the best we can, to have a worthwhile final part of the season with still plenty of races to go. We have a lot of work to do and we have to be focused on that.
As for my race it was very short as almost immediately I had an issue with brakes. I went on the brakes in the first chicane but the car didn’t slow and I had to drive through the run-off area. Actually it was the best possible spot to have the issue.
We have to keep our heads up, even if it is difficult. Now we head to Mugello, a completely different track and maybe there we could be in a bit of a better place. Hopefully we can have a clean weekend.”

Mattia Binotto Team Principal
“Retirement for both cars is the worst possible end to a very difficult weekend. After Belgium, we knew that here too we would struggle a lot and so it turned out. That was clear in yesterday’s qualifying but failing to get either car to the chequered flag really hurts. It’s even more disappointing that Sebastian’s retirement was down to a lack of reliability on the car. Problems like that, in this case with the brake system, should not happen.
It’s a very hard season but it’s by facing up to difficulties like these that you get stronger. We must look ahead and there are useful lessons for all of us to take away from this to build for the future. Having said that, we must absolutely not give up and we will be giving our all next weekend at Mugello which is a special event for us, being our one thousandth Formula 1 Grand Prix.

Inaki Rueda, the Scuderia’s Head of Race Strategy, explains what the plans were at the start given the grid positions with Charles 13th and Sebastian 17th

“As in Belgium the week before, given the outcome of qualifying, there was a free choice of tyre for the start of the race and we again split the choices between the two drivers: Charles went on the Soft and Seb the Hard,” explains Inaki. “The red tyre would give a good advantage at the start, especially considering the long straight from the start to the entry to the first chicane, and also offer a bit more grip in the opening laps. Unfortunately, although Charles got off the line well, he was unable to make up any places and was stuck in traffic, so that he was passed by Kimi Räikkönen (Alfa Romeo) who was on the Mediums. Our man managed to stay quite close to the Finn but only for a few laps and then the Soft began to degrade and the Alfa Romeo got out of the minimum distance after which it was not possible to try and undercut. At this point, he was actually fighting with Alex Albon (Red Bull) who had to take a five second penalty and with Antonio Giovinazzi (Alfa Romeo) and we decided to make a relatively early pit stop (lap 17) to switch to the Hards, which are very long lasting. The first laps were pretty good and Charles was able to maintain his position.”

At this point everything changed when Magnussen parked his car at the side of the track just before the pit lane entry.

“That led to what we feared most, a safety car period just after our pit stop, which in theory gives those yet to stop an almost free pit stop. Usually, pitting under the safety car saves 40% of the time: if a pit stop costs 20 seconds, when the race is neutralised it only costs 12. On top of that, because of where the Haas was parked, the Race Director closed off the pit lane on safety grounds, given that a breakdown vehicle was required. The situation was thus reversed in the nine seconds from the neutralisation period starting to the Race Director’s decision. Once the pit lane was open again, almost the entire field pitted for their first and obligatory tyre change and Charles was now sixth at the restart. But two of the drivers ahead of him, Lewis Hamilton (Mercedes) and Giovinazzi, were due to be penalised for having come into the pit lane when it was closed. Our driver did really well on the restart lap, overtaking both Alfa Romeos so that he was theoretically third. However, any thought of a great result vanished a few kilometres later, at turn 11 to be precise, when Charles went off the track and crashed heavily into the barriers.”

Fortunately the driver was fine…

“It was a heavy impact but Charles emerged completely unscathed, as confirmed by the medical centre at the track and then after more extensive checks yesterday in Monaco. Once again it showed just how high are the safety standards in Formula 1, although one can never drop one’s guard on this front, so we must always study every accident to learn as much as possible to reduce the risk to a minimum. It’s this perseverance and attention to detail, which has led to rigorous safety systems, guaranteeing maximum driver safety. These measures also had an effect when it comes to the failure that led to Sebastian’s retirement. His car still had some braking effect given that the front brake system was still working. Obviously, it was not enough to continue and so he retired. Now we must understand what happened and we are working on that with Brembo.”