GRAND PRIX: Miami: Fake It Till You Make It 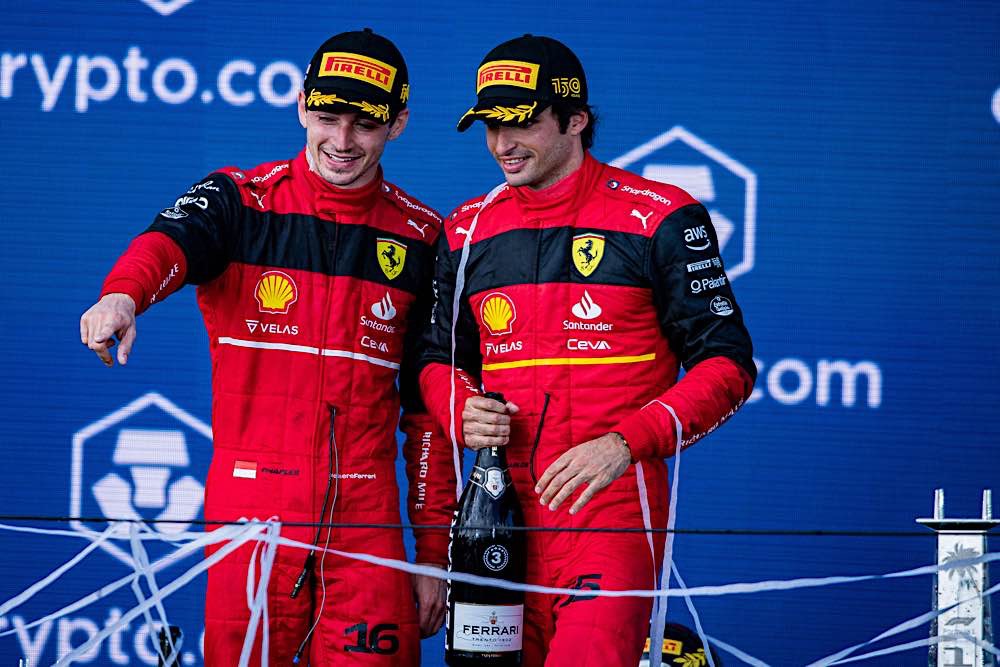 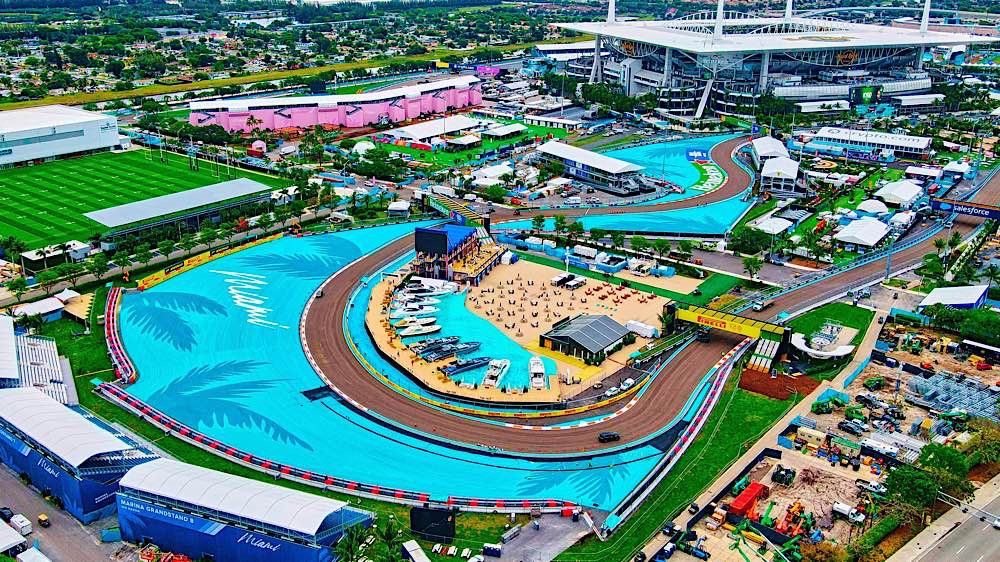 The fake marina worked, maybe because it was so blatant. 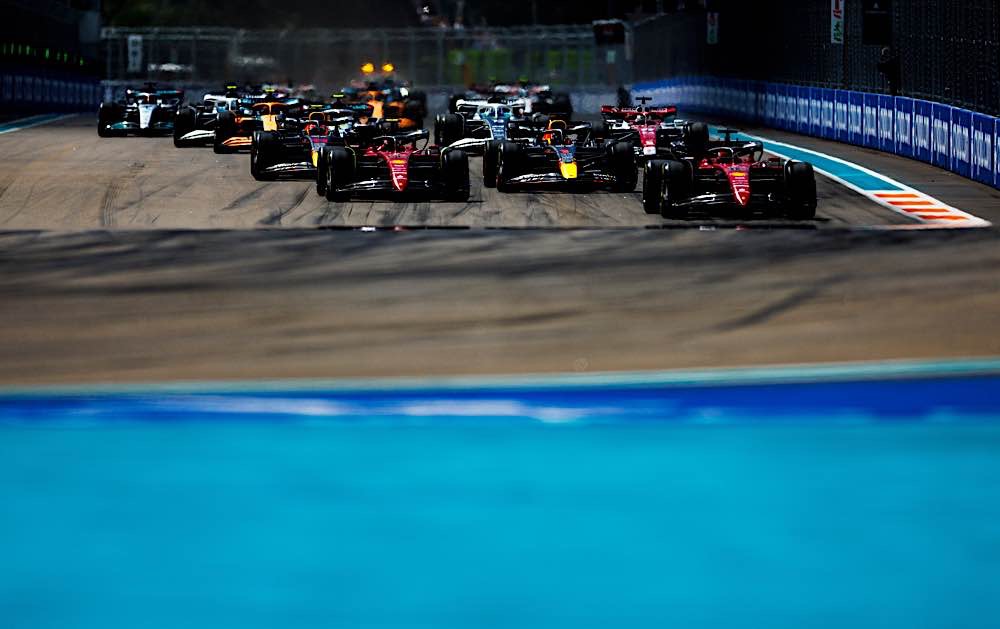 Charles and Carlos lead at the start.

Occasionally I get tired on a long journey and, avoiding the recommendation of Winston D’Arcy which I assume involved fruit and veg as he mentioned “Class A”, I tried some Premium Energy Drink which shares its name with an F1 team. It worked, but at £1.40 a pop I begrudged it. I then tried a German Discount Supermarket version at 36p. Tastes just as vile and similarly stimulating. So is a cheap imposter always worse than the original? A question which came to my mind often when watching the Miami GP, sponsored by a crypto currency and NFT trader (what they? Ed).

The organisers obviously like the Monaco vibe, so coloured a bit of concrete blue and craned in a few boats, which may have been real or not, added an overpriced terrace next door, and populated it with people whose faces and bodies may in many cases be described as “non-matching numbers”. Behold, Monte Carlo to a tee, at least as far as the paying punters were concerned.

It’s symptomatic of F1’s attempt to break the USA, and it looks like Liberty are succeeding where Bernie failed – remember the 1990’s Phoenix  race beaten for spectator numbers by ostrich racing? They’ve done it in part by using the power of social media and the scripted reality streaming show “Drive to Survive”. Amusing hokum, but little to do with racing. However, it has succeeded in motivating “Generation Z” to attend which must be regarded as a success.

Even the location is a bit of a fake, though perhaps the spectators find a track based around the “Hard Rock Stadium”, a baseball and American Football venue, less intimidating than a true track like Austin or (whisper it) Laguna Seca. It’s supposed to have excellent viewing, which I have to admit is absent at Silverstone, Spa or Monaco, though it certainly had a design fault that resulted in Carlos Sainz going off and hitting a very hard barrier on Friday, which is bad enough, but the “ever efficient” FIA race director ignored the request for extra Tecpro.  On Saturday, Esteban Ocon went off with a reported 51g impact, resulting in him missing qualifying.

However, the design of the track did lead to a bit of extra interest, even if it was at Ferrari’s expense. Some noted that the Red Bulls spark more from the back than the front, indicating that the mix of aero and mechanical balance is reducing the rake, or angle of attack, as the car gets faster, thus reducing drag. With a very long straight, could this be part of the reason that the RB18 had such a high terminal speed? It is an example of a different approach which looks to have made them difficult to catch so that the dreaded DRS is less effective.

Charles took pole which was his 12th; the Ferrari press release pointed out that this equals the number of poles by Vettel at Ferrari (which sounds impressive) and in the all time list, the number of poles by Coulthard. This somehow doesn’t sound quite as impressive.  Carlos’s second might arguably be a greater achievement after the high-g impact from Friday, especially as the run was in sectors 1 and 2 faster than Charles. The ability of top level drivers to switch off or supress thoughts of previous incidents is a necessary attribute that normal people don’t possess.

By managing the tyre usage, each entered Q3 with 2 sets of tyres, so that when their first runs left them behind Verstappen, they were able to take fresh softs and lock out the front row. Needless to say, Verstappen was 3rd, though a mistake at turn 6 lost some time, and his increasingly reliable wingman Perez 4th.

Elsewhere, Hamilton looked precarious in Q1, rising to 5th from 18th only in the last minutes, despite the Mercedes seeming to run well in practice. In the end, he would produce a credible 6th, behind his former team-mate Bottas who put the Alfa into 5th.  Meanwhile, current team mate Russell was eliminated in Q2 (12th), along with BBC Question Time star Sebastian Vettel (13th), whereas Stroll dragged the Aston to 10th. Gasly (7th) and Tsunoda (9th) possibly also benefitted from a track suiting their Alpha Tauris, while Norris took 8th, six places ahead of his hapless Aussie team-mate.

The high temperatures provided an interesting sideshow as Aston over-cooled their fuel. It needs to be within 10 degrees of ambient, and so the delay while it warmed meant a pitlane start for both cars.

Meanwhile, Charles got a good start, but on the dirtier side of the track Carlos struggled a little, allowing Verstappen to pull alongside in the run to turn one. Realistically, once Verstappen is alongside he rarely gives way, and so he took second. The medium tyres started to drop a little from lap 7, and by lap 9 Verstappen had initially failed to pass, but after a second chance to take advantage of DRS, he gained the lead at turn 1. Charles was unable to get close enough in the DRS detection zones due to the higher outright top speed of the Red Bull, and lost a few tenths per lap until he took on hard tyres on lap 24.  Verstappen followed suit on lap 27, leaving Charles briefly in the lead.

Carlos had looked a little earlier to be under pressure from Perez, with DRS coming into play, but the Mexican’s pace suddenly dropped due to a sensor issue, being 8 seconds in arrears by lap 23. This proved to be fortunate because Carlos’s pit stop was troubled with the right front, taking 5.4 seconds compared to a norm of under 3. However, once the tyre changes had sorted themselves out, the order remained Max, Charles, Carlos, Checo.

On lap 41, Gasly, normally an impressive driver, went wide, drifted off track and rejoined, but was unaware of Lando Norris closing in on him. The two touched, Lando spun dramatically and ended up mid track. After a brief VSC, the real safety car was launched, bunching up the field, which helped the level of interest as there were 8 and 10 second gaps between first, second and third. Perez took on fresh mediums without losing 4th to Bottas.  Behind him, the 2 Mercedes drivers in 5th and 6th also took on mediums. Battle lines were drawn for the restart.

On lap 46, the cars were released. For a few laps, Charles was close behind Verstappen and it looked as though he might be able to pass, but it was not to be. Whether the pace dropped or whether a decision was made that a solid second beats an over-driving non-finish, nobody can say, but Charles dropped back and held on to second. Behind him, Perez was equally aggressive against Carlos in 3rd.  In the words of the team, Carlos fought like a lion, and made sure that the Mexican could not use DRS. Perez had a good try in turn 1 on lap 52, but locked up, leaving Carlos safe.  Both drivers did well to achieve two podium places, bearing in mind the speed advantage of the Red Bull on the Miami circuit.

Elsewhere, it was interesting to follow the progress of the Mercedes. Hamilton locked up in turn one and dropped back to 8th, having a brief rub with a fast-starting Alonso, up from 11th to 7th.  He would work his way back to 6th, but his race was nothing compared to the seemingly indomitable Russell.  Falling to 15th on lap 1, he started on tyres which lasted to lap 40, by which time he had moved up, mainly by taking advantage of everybody else’s pit stops, to 5th. Fresher tyres allowed him to then pass Bottas and his own team mate, resulting in 5th and 6th for the Mercedes team, which must have been better than they envisaged. Russell still seems to have the upper hand in the silver arrows.

Bottas took 7th, while Ocon took a  similar path to Russell, changing tyres on lap 41 by which time he had moved from the back to 8th. It’s clearly an interesting choice as to which tyres to start on. At the front anything but mediums would invite instant demotion, but the midfield runners must have been frustrated to see Russell and Ocon picking them off.

It was pleasant to see Albon scoring for Williams in 9th, which brought them some joy, and one has to also commend Stroll for 10th from the pitlane with “just warm enough” fuel. However, it must be said they both lucked into the places when Schumacher made a half hearted attempt to pass Vettel on lap 53 when they were running 9th and 10th , putting Seb out and demoting Mick to 15th.

Despite being a real circuit, the next race at Barcelona has the same characteristic of a very long straight and some windy sections. Will the results follow Miami?

It’s a sign of the times that your scribe was a bit disappointed that the podium places were only 2nd and 3rd. Imagine that two years ago.

Despite the reservations, though Miami wasn’t a classic race it was undoubtedly a great success.  Mattia Binotto said “I want to thank the American fans for their enthusiastic welcome and my congratulations to F1 and the Grand Prix organisers for putting on an incredible show, both on and off the track.”  Note “on and off track show”.  Liberty is gradually imposing its internet-led house style on F1, for better or worse.But if it means Grand Prix racing will continue to be successful in the coming years then that might be a price worth paying because in this case I don’t expect a discounter to come along with a credible alternative.