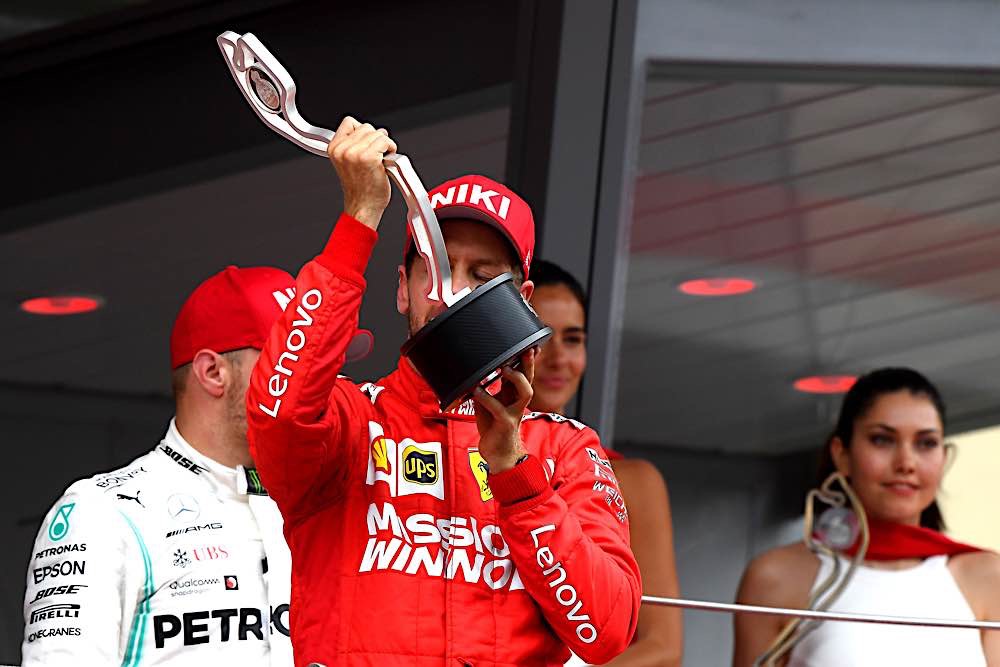 Seb was rewarded with a second 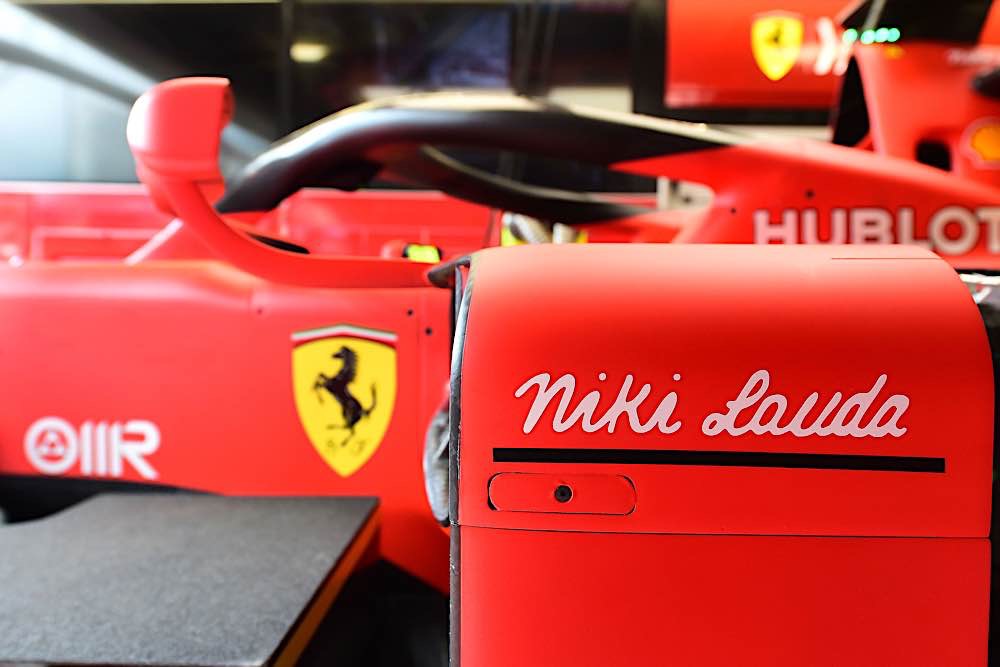 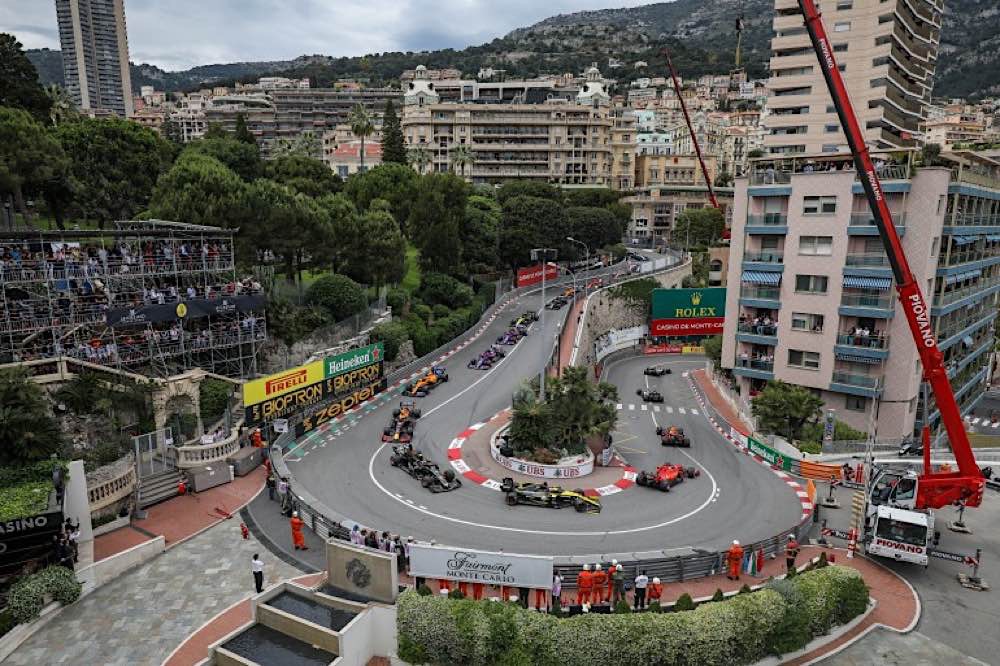 This view may be a cliche, but it's an effective one

I finished my report on the Spanish GP by saying “I can’t help wondering if the management concept may also need a look?”

After Monaco Q1 on Saturday, I said much the same thing again, but loudly, forcibly and slightly wearily. By evening I was emerging from the Black Dog but then read Mattia Binotto’s comments that “We took some risks to perform as well as we could” and “We’ve got the right procedures but we need to improve our tools”. Welcome back Black Dog. Historically, within my 40 years of interest,  the consistently most successful teams have always been managed calmly and confidently. Ferrari’s golden period under Ross Brawn is a good example. At the moment arch rivals Mercedes have a good car/engine combo, but the SF90’s performance in early races (especially Bahrain) didn’t look inferior to many. Where the Brackley team have scored is in the detail, and the ability to recover from setbacks. To have persuaded Ferrari that the championship is lost and that the only way to catch up is to take risks is one of their major achievements.

As for better tools, meaning strategy algorithms, I was reminded of Ken Tyrrell’s comments at Monaco when a number of teams complained of poor weather forecasts leaving them on slicks on a wet track. “Go outside, put your hand out, if it gets wet use the grooved tyres”. If I know that Monaco is tricky and unpredictable why didn’t the team? Watch the timing screens, be ready to change to plan B if plan A isn’t working. I think it’s called common sense.

FP3 went well for Charles, he was at the top of the times. But Seb hit the St Devote barriers. The necessary rapid rebuild caused pressure for the team.  Both cars locked up into Rascasse in Q1, crucially flat spotting the fronts for Charles. Rather than waste a second set, the team decided to gamble on the time (P6) being good enough. That all wasn’t generally well was indicated by Charles missing a weighbridge call, fortunately recovered. It almost seemed as if all the effort was being put into Seb and Charles was forgotten. In fact, the effort to get Seb ready was rewarded in Q1 by him bumping Charles. Seb certainly seemed to give everything in Q2 and Q3, ending up 4th, behind the “inevitable” Hamilton/Bottas lockout and sandwiched between the two Red Bulls. It’s perhaps indicative of the unpredicatble nature of Monaco that whilst Seb was around 0.8 sec from Hamilton, a further 0.8 got the grid to Lando Norris in 12th.

Lap 1 at Monaco is always worth watching. Hamilton got his start right, and by St Devote he looked to have the race won. Whilst Verstappen did get ahead of Bottas, the assertiveness classes the Finn clearly attended over winter paid off and he joined Hamilton. Seb chased Verstappen. Further down the field, Ricciardo made up a place (6 to 5) while Kyvat dropped from grid 7 to 9th.

Meanwhile, back in the land of Williams and Racing Point, Charles was moving forward. Despite an escape road trip at St Devote, necessitating a pass of Stroll, he was into 14th at the end of lap 1. An inside route at the hairpin gave 13th on lap 2. Romain Grosjean proved more difficult. It was lap 7 when at Rascasse, named after Monaco’s version of Wetherspoons, he audaciously passed, just touching wheels. Grosjean described it as Kamikaze on the radio, a little difficult to take with his history.

Unfortunately at Monaco, getting away with one audacious move often gives false confidence. A lap later Charles tried the same move on Hulkenberg, with similar results in that there was minor contact. Unfortunately, averages caught up with Charles and this one didn’t work. He suffered a puncture. What looked like a degree of impatience led to the flailing tyre destroying various lovingly crafted carbon bits. The hobbled car was quickly fitted with new tyres, but the effort was for nothing as Charles retired on lap 16, amazingly the only retirement.

Charles’s over-shared carbon bits were a bit of an issue, so the safety car came out. Naturally, this was taken by the leaders as a “free” tyre change. Interestingly, Mercedes thought of the issue of stacking, and so Bottas’s in lap was slow enough to allow for it. Detail, not big stuff. Verstappen’s mechanics did a very quick stop and took a chance on releasing him. The Monaco pitlane is narrow, crowded, and the buildings in it are flimsy by modern standards. A collision could be a major issue. Fortunately the collision resulted in no more than a puncture for Bottas who returned on the next lap, dropping behind Seb. There were a few raised eyebrows that when the almost inevitable penalty for Max came it was as little as 5 seconds.

In the early tyre change, Hamilton was put onto mediums. With further safety cars not unlikely, and rain forecast, it seemed the logical choice. Almost immediately Hamilton was complaining to his engineer, building up the Mansell-esque “what a hero I am for finishing in this undriveable shed” story. Whilst there were undoubtedly problems, strategist James Vowles came on to politely tell him to just get on with it.

Such is Formula 1 in 2019 that the effects of the tyre-saving lap times meant at one stage George Russell in the ‘orrible Williams had fastest lap. However, one matter of concern was that during the slow running, Seb’s hards didn’t seem to be working properly.

The 5 second penalty meant that the only way Verstappen was going to get a podium would be to pass Hamilton, but it didn’t look likely. He tried through Rascasse with no effect. Then, on lap 68, both turned up their engines. There was a bit of a fight, including a harmless touch at the Turn 10 chicane. Such inappropriate “racing” lead to a stewards’ opinion: “The Stewards considered that neither car was wholly or predominantly at fault for the collision and both drivers took appropriate action subsequently to mitigate the effects of the contact.” So that’s alright then, except that common sense wouldn’t have even raised the question.

As expected, Hamilton ended on the top step and thanks to the minor penalty for Verstappen, Seb was second after a sensible drive – effectively a well deserved “award of merit”. Bottas deserved better than 3rd, but as it benefitted Seb, who’s to complain? Gasly, with an extra “bolt on the softs for a fastest lap” point was fifth, Sainz an impressive 6th, with the two Torro Rossos in 7th and 8th.

But what might have been? If Charles’s FP3 had been repeated in Q3, what a race we could have had, with Seb hassling the Mercs and Hamilton increasingly frustrated. I have faith that this could conceivably have happened. Do you have faith? And more importantly, does the Scuderia have faith?