GRAND PRIX: Portimão: Over the Limits 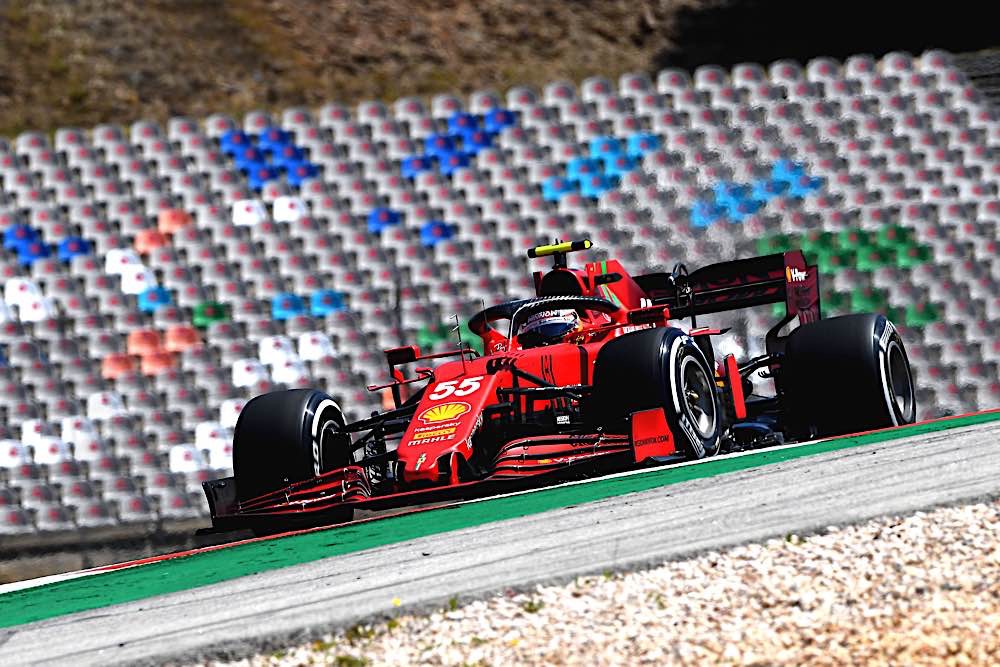 Carlos against the arboreal background 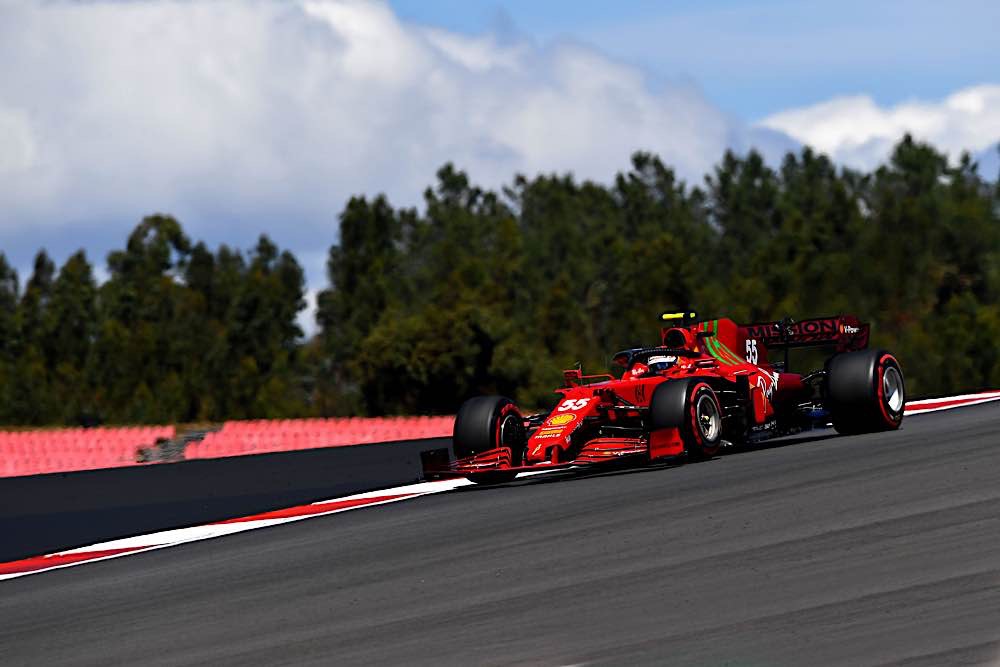 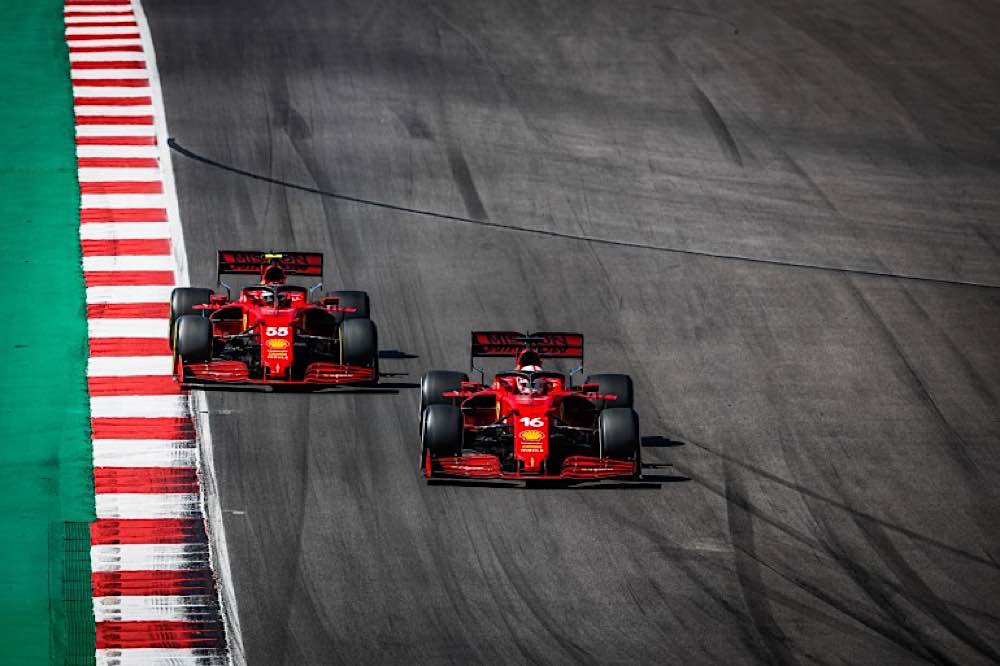 The two cars run together

Portimão was undoubtedly the story of limits. On an obvious level, Verstappen was the victim of the FIA’s obsession with track limits on two occasions. On another level, many enthusiasts, and not just Tifosi, are reaching the limit of their tolerance for a podium that, despite glimmers of hope at Imola reverted this week to Mercedes and RedBull. Predictability is not good.

It seems almost as if the PR department has reached the limits of its enthusiasm. The press release after Portimão qualifying opened as follows: “Qualifying for the Portuguese Grand Prix turned out to be very close, as has been the case so far this season, with around a dozen cars all capable of fighting for a place on the third row of the grid. Saturday’s performance matched our expectations, with Carlos Sainz fifth and Charles Leclerc eighth and when analysing the result, there are a few positives to consider.” Just re-read that, please. “Third Row” and “matched expectations”. Compare that with this extract from the Ferrari annual accounts: “The prestige, identity, and appeal of the Ferrari brand depend in part on the continued success of the Scuderia Ferrari racing team in the Formula 1 World Championship.” Do we now have more passion for success from the accountants than from the race team?

Ferrari were the only team besides Mercedes and RedBull to get both cars into Q3, which is encouraging for Ferrari and for the diversity of the top 10. Charles even made the cut on mediums, giving him optimism for the race. Conditions were difficult with low grip, constantly changing because of the wind that varied in intensity and direction from minute to minute. This led to his first Q3 time being his best, 1`19”306, which gave eighth. Carlos shone in the final minutes, emerging as the best of the midfield pack on both his two runs and his time of 1’19”039 was good enough for fifth on the grid.

Out at the front, the real P1 was Verstappen (1’18”209) but a freak gust moved him beyond the track limits beloved of the FIA. He lost that time and was 3rd with a half second slower time, allowing Bottas to take pole (18.348)  from Hamilton after surprisingly moving to mediums for their final run. Perez duly put in a good number 2 performance for 4th, with Ocon dragging the Alpine to 6th, seven places ahead of his team-mate Alonso. Norris, Gasly and Vettel filled the remaining places, the former World Champion seven places ahead of team-mate and 2020 pole sitter Stroll. Putting the angle grinder to those aero bits has certainly hampered the Astons.

The race did not, for Ferrari, live up to expectations. Behind the first 3, Carlos got a good start to edge out Perez. On lap 2 Kimi collided with Giovanazzi on the pit straight and the safety car was needed to allow shattered carbon wing to be collected. This took five laps and at the restart Perez got back past Carlos, and further forward Max passed Hamilton. Norris then moved past Carlos as well, a position he stayed in until the stops when things took a turn for the worse.

Carlos said: “We tried the undercut by changing quite early onto the medium and it didn’t work. From there on, it was a big struggle to make it to the end with that compound due to the graining. I’m disappointed, as I feel we had a good opportunity to score good points today. We will analyse the race, learn from the strategy, from the tyres and from the car behaviour. On to Spain.”

His own summary can be expanded to dropping to 9th after the stop, rising to 8th for 14 laps, only to be demoted by Alonso on lap 58 and Ricciardo on lap 64, 3 from the end, to finish 11th. The team suggested that he might have been pushing a bit too hard for the tyres. If there must be a fault, pushing too hard is one to have.

Charles also suffered from graining on the mediums, which didn’t seem to affect other cars, so obviously a development opportunity.

Just as Carlos slipped back at the first rstart, so Charles gained a place over Ocon and ran behind his team-mate. He passed on lap 37, and gained places as Stroll, Alonso and Ricicardo, on different tyre strategies, pitted. Unlike Carlos, having moved up to 6th, he kept Ocon at bay and finished there. He later commented that 5th might have been achievable, but no more.

Out at the front, Lewis asserted his number one status on lap 20, while Bottas slipped to 3rd. Perez took the lead on pit stops, and Hamilton had a bit of a fight to get it back, helped somewhat by Mazepin impeding Perez. He was penalised for ignoring blues by 5 seconds, which made little  difference as he was last by 64 seconds.

At the finish, the top 3 (Hamilton, Verstappen, Bottas) was so certain that there was time for both Max and Val to pit on the last couple of laps for softs to try for fastest lap. Both achieved it but poor Max again suffered from track limits and had it taken away.

Perez made sure the top 4 wasn’t interesting, with Norris achieving 5th as best of the rest. Behind Charles, Ocon and Alonso brought the two Alpines in together, while Ricicardo and Gasly completed the top 10.