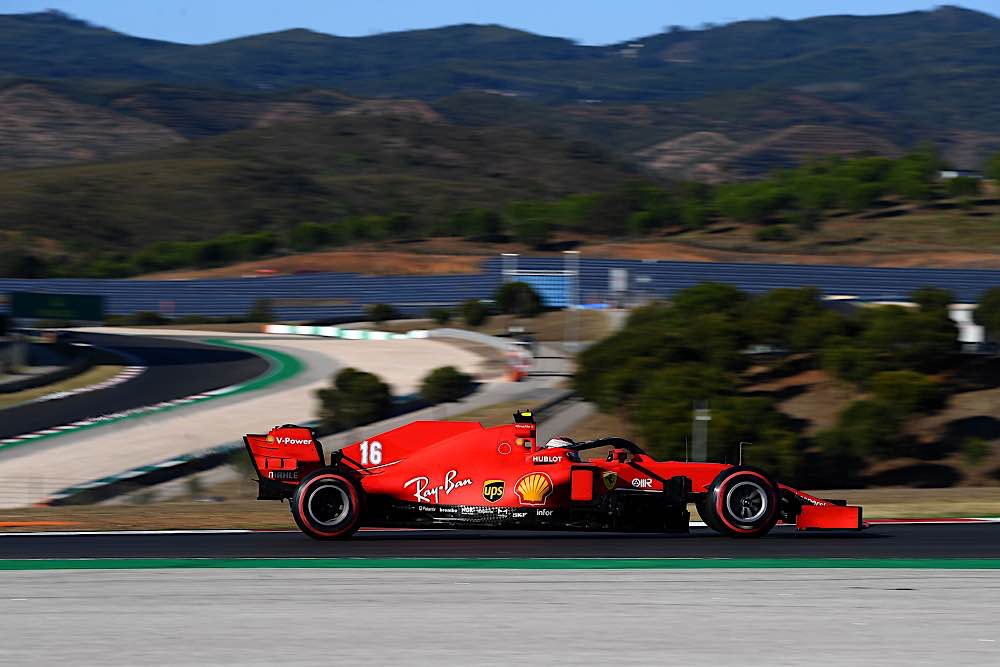 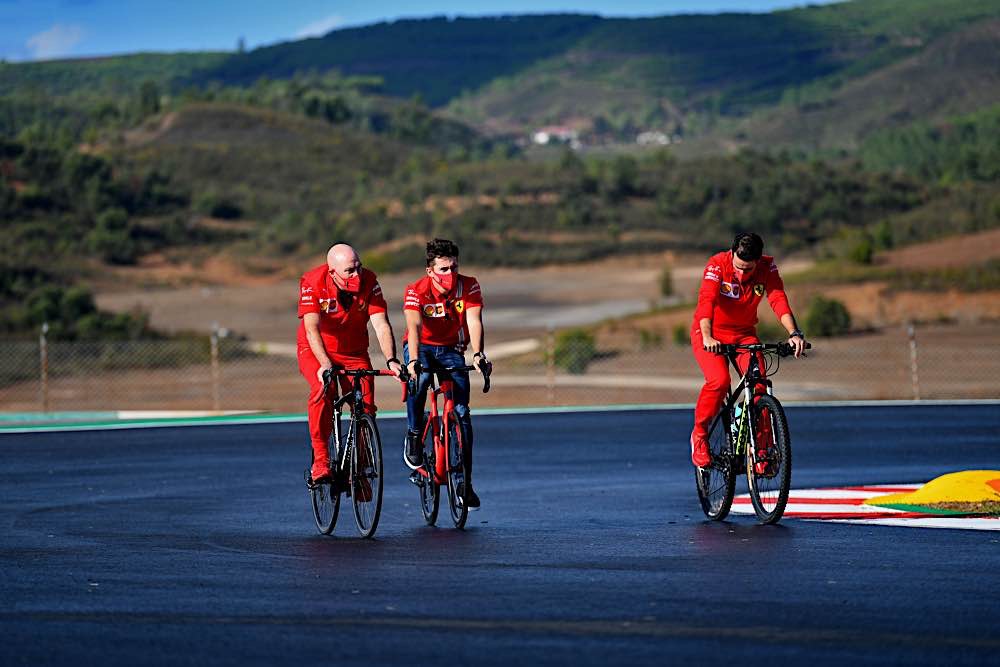 Reconnaisance is always better by bike. 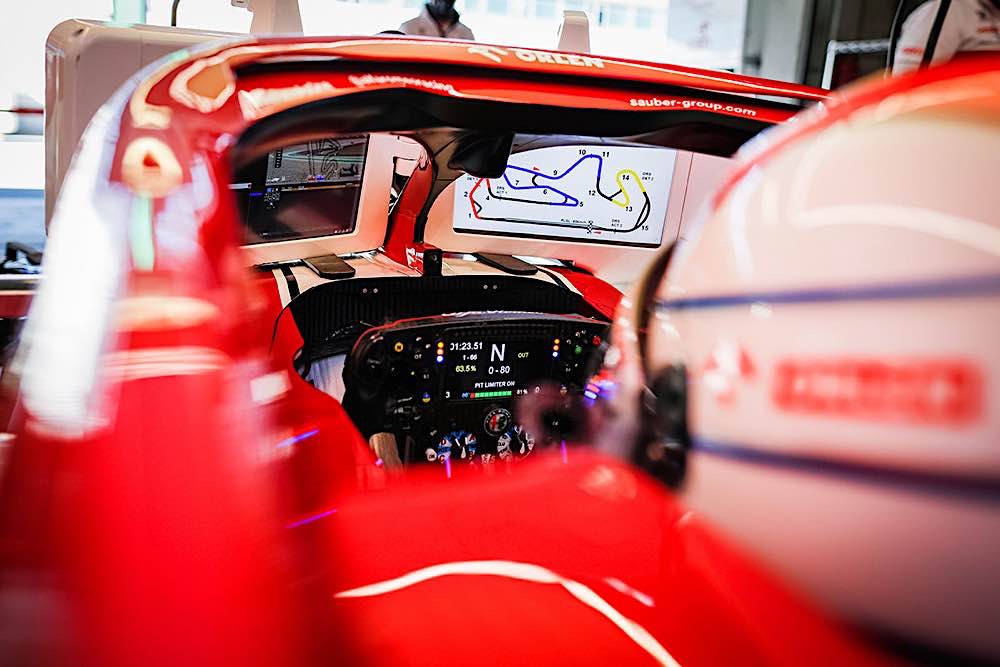 OK, so I turn right when the track changes colour to red.....

Portugal seems to generate interesting Grand Prix, and whilst that applied to this year my mind went way back when the Portimao event was announced. Let me remind you of a story of a Ferrari going backwards, Britain’s best loved driver of the time, and an involvement by the World’s best of the time that resulted in a change to the World Championship. In fact, let me remind you of two such stories.

In the 1958 race on the road circuit at Oporto, Hawthorn stalled his 246. The only way to get it going was a bump start which meant running downhill, against the direction of the race. The stewards disqualified him, but Moss intervened, pointing out that Mike started on the pavement which wasn’t part of the course. His 7 points were reinstated. At the end of the season, Hawthorn won the Drivers’ championship in his Ferrari by a single point from Moss. Is it any wonder Moss was universally admired for his sportsmanship as well as his abilities?

By way of contrast, in 1989 Il Leone Mansell overshot his Estoril pit box, and did what anybody would do when missing a slot in Waitrose’s car park – he hit reverse in the 640 for a couple of metres, despite the mechanics waving to stop him. This caused a slow pits stop and worse, a disqualification. Mansell collided with Senna while fighting back from the delay, and was suspended for a race for not seeing the black flag. Senna’s loss of points meant he had no realistic chance of the Championship. Possibly a slightly less uplifing tale, but still memorable.

Never having been to or seen Portimao, I looked at the map and it looked a bit like a wobbly version of the lovely Estoril. I thought I should ask an F1 driver about Portimao. I don’t know any current ones, so asked Monaco F1 Historic winner Martin O’Connell. “It’s a great track to drive, there are lots of blind corners. It should be a good race. When I went there the track was a bit uneven. I think the ground moves a bit. I know they’ve resurfaced it for the Grand Prix, so it should be smoother.” I commented that when I went to the Algarve in the 1980’s, the area where the track is seemed to be in the middle of nowhere. “It still is; there’s a big dual carriageway that goes to the circuit then stops dead. There’s nothing but the track there, but it’s worth the trip.”

The resurfacing gave a smooth track, but not a grippy one. Ricciardo said “It’s not a nice surface to drive.” Which is good news for spectators. The good news for Tifosi was that more aero development had been done. Race Strategist Inaki Rueda said: “We introduced a new floor and diffuser, which we had wanted to test at the Nurburgring, but could not because of the rain. We also tried some solutions that should help to warm up the tyres, an area in which we have suffered this year, especially in the low temperatures we have encountered in this unusual season. I’d say the results were positive, to the extent we then fitted the updates to both cars.”

Qualifying was delayed because of a drain cover being thrown up when Seb touched it in P3. The wonders of quickset concrete resolved the issue, and a full inspection of the covers around the track was performed. More minor subsidence issues?

The aero changes helped both cars through to Q2, where the SF1000s took to the track on Medium tyres, with the aim of using that compound for the race start. Charles immediately posted an excellent 1’17”367, while Seb could only manage a 1’18”116. Both drivers came in for another set of Mediums. However, it was clear that track conditions were very changeable, especially because of the wind, with very few drivers managing to improve their times. Seb did go quicker, posting a 1’17”976, but he had a few problems waking up the tyre. It wasn’t enough to get to Q3 and he had to settle for 15th.

In the final 12 minutes, Charles did two runs on the Soft tyres. His first was a 1’17”456. In the closing stages, when Albon and Perez went quicker, he went out again to improve to an excellent 1’17”090, good enough for fourth on the grid, less than two tenths slower than Max Verstappen, third in the Red Bull and just over four tenths off Lewis Hamilton’s pole time in the Mercedes. We are moving forward!

For the front of the grid, please re-read almost any other report from this year: HamBotStappen. With the prospect of a record 92nd win, Hamilton did a lap slower than Bottas’s best in Q2 but better than the previously dominant in practice Finn could manage in Q3.

Perez was having a good weekend and managed 5th, beating Albon who has been given marching orders unless he can achieve the impossible. Has it occurred to RedBull that the car may not be perfect and in fact Verstappen is VERY quick? The midfield boys then formed up with both Mclarens ahead of Gasly and Ricciardo, whose lowly 10th might be explained by him not running due to an issue at the end of Q2.

It’s all about grip. The aero’s only there to push the tyres down, the engine’s only there to make the tyres go round. Add a slippy surface to a bit of light rain at the start and you get poor grip, unhappy drivers  and great spectator entertainment.

The rain meant that the start was slightly chaotic, particularly for the drivers who were on the smart choice of medium tyres. Charles  lost four places, slipping back to eighth, while Sebastian reached the end of the first lap in 16th. As soon as Charles managed to get temperature into his tyres he lapped at an excellent pace – allowing him to pass the Renault of Daniel Ricciardo, the Alfa Romeo of Kimi Räikkönen (yes, Kimi was ahead!) and the McLarens of Lando Norris and Carlos Sainz to make his way back up to fourth place. Sebastian similarly made ground, taking himself up to the fringes of the points.

At the front of the grid, Hamilton made a good getaway and led into Turn 1. From the clean side of the track Verstappen put pressure on Bottas but he fought back and as the pair went through Turn 1 the Dutchman was forced wide, which allowed Pérez to attack. There was contact with the RedBull and the mercurial Pérez was bounced off track, rather spoiling his weekend. Verstappen dropped to P5.

Hamilton locked up into Turn 5 and as seems standard Bottas took the lead. But tyres came to the fore. Soft-tyred Sainz soon had everybody, especially Hamilton and Bottas, rubbing their eyes as he took first place. A nice moment of glory, but as the mediums came to life he was passed by Bottas and Hamilton. Verstappen, also on softs, began to find more and more pace and on lap 8 he dismissed the McLaren driver into Turn 1 to reclaim third place.

As well as grip being vital, there is one more fundamental truth. When it comes to contract time Kimi will pull off some kind of stunner, and laps 1 and 2 were it. 10 places in just over a lap showed he may be the old man of the grid but he’s still got it. He finished out of the points in 11th, but who cares. The man’s a racer. If you haven’t seen the on-board of it, you have missed a treat.

As the race matured, both the Scuderia drivers – or at least their engineers –  went for the same tactics: just one pit stop, in which they switched from the medium compound to the hard. This choice was spot on both for Charles, who pitted from 3rd on lap 34 and was then able to manage the gap to his chasers without problems.  Seb, pitting from 8th on lap 27, initially dropped to 15th, but gradually came through the field. He passed Kimi for tenth place on lap 54 and challenged Ricciardo for ninth at the end, without joy.

Hamilton, meanwhile, got bored with 2nd and took the lead on lap 20. With no reason to do otherwise (and despite a plea to his pitcrew from Bottas) both Mercs took on hards at their single stop and casually ran to the end, Ham 25 seconds ahead of Bottas, Bottas a “mere” 9 seconds ahead of Verstappen who in turn was 31 seconds in front of Charles. Grip came in, excitement went home in a sulk.

Sergio Pérez, meanwhile, made a great recovery from his first-lap incident to rise to fifth place but in the final laps, on fading tyres, he was passed by Gasly and Sainz to finish 7th. What could he have done without that first lap brush?

Mattia Binotto said after the race: “Overall this was quite positive. Charles had an excellent race, very mature. We knew that the first lap would be treacherous and so it proved, not least due to the drops of rain that fell right at that moment. Once his tyres were up to temperature, he was able to make up places and get himself into the position we had been hoping for before the race. Sebastian also found himself in difficulty at the start, losing some positions and in the end he didn’t manage to get any higher than tenth.

“Now we must confirm the progress seen in recent races as we go into the last part of this championship. We are still a long way back in the Constructors’ Championship but it’s possible to make up ground: this must be our target and we must do everything to achieve it.”

With Imola next stop on the tour bus, it’s nearly home, so may the forward momentum continue.