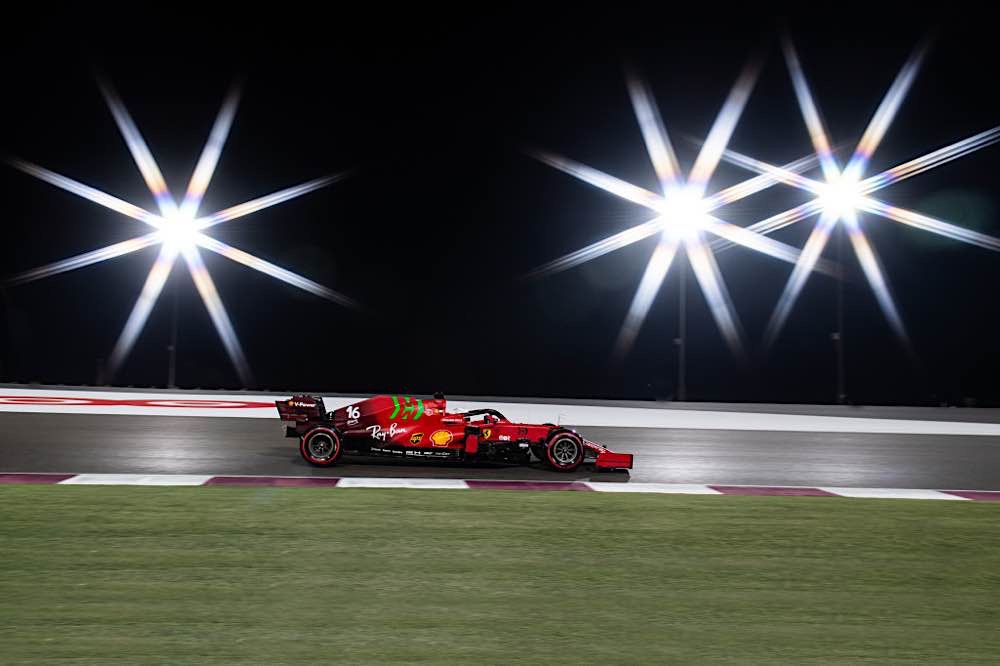 Charles beneath the lights. 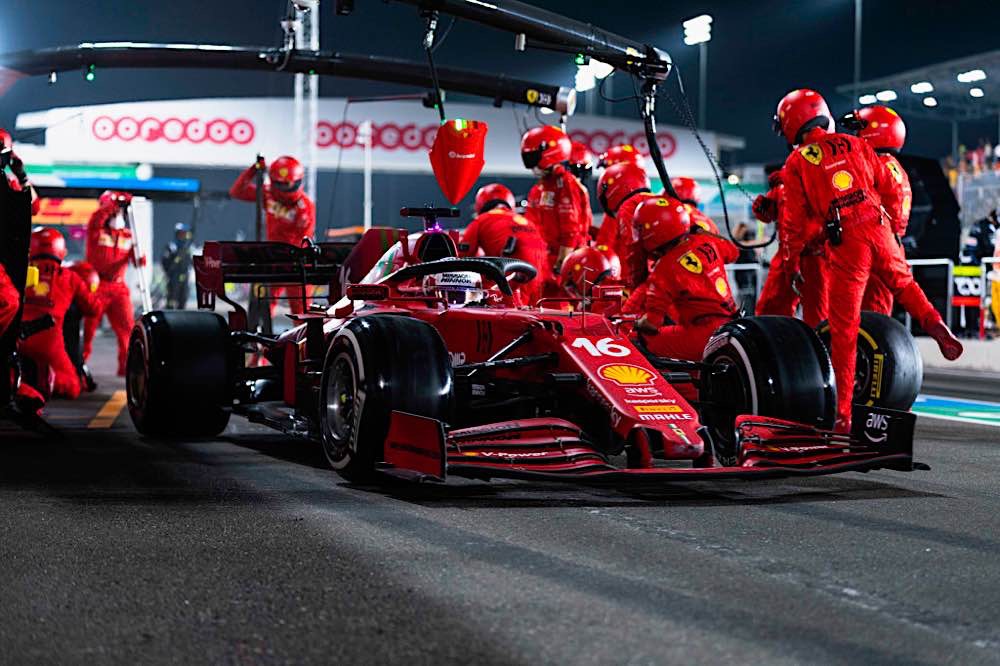 Charles had an effective double-stacked pit-stop 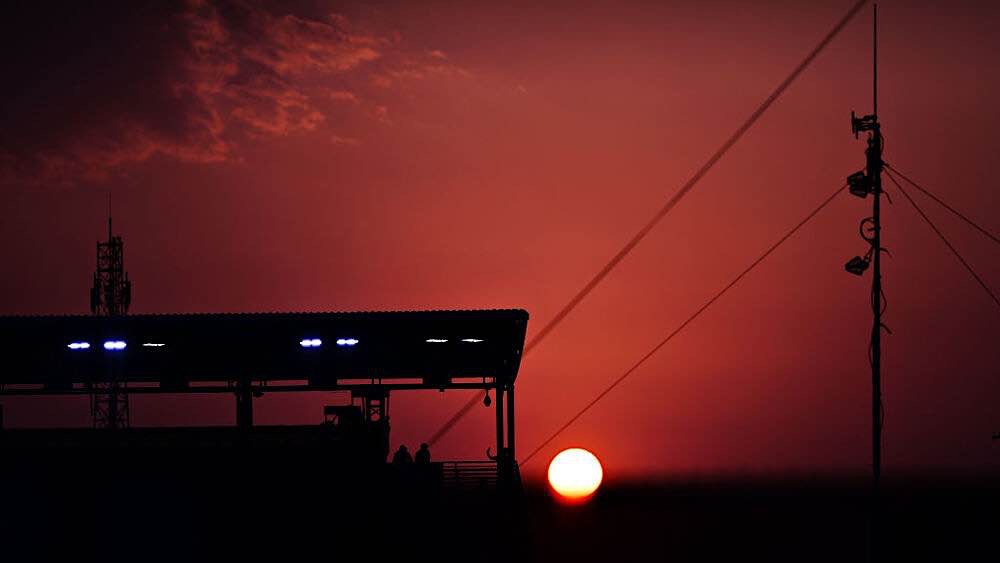 The sun sets in Qatar. 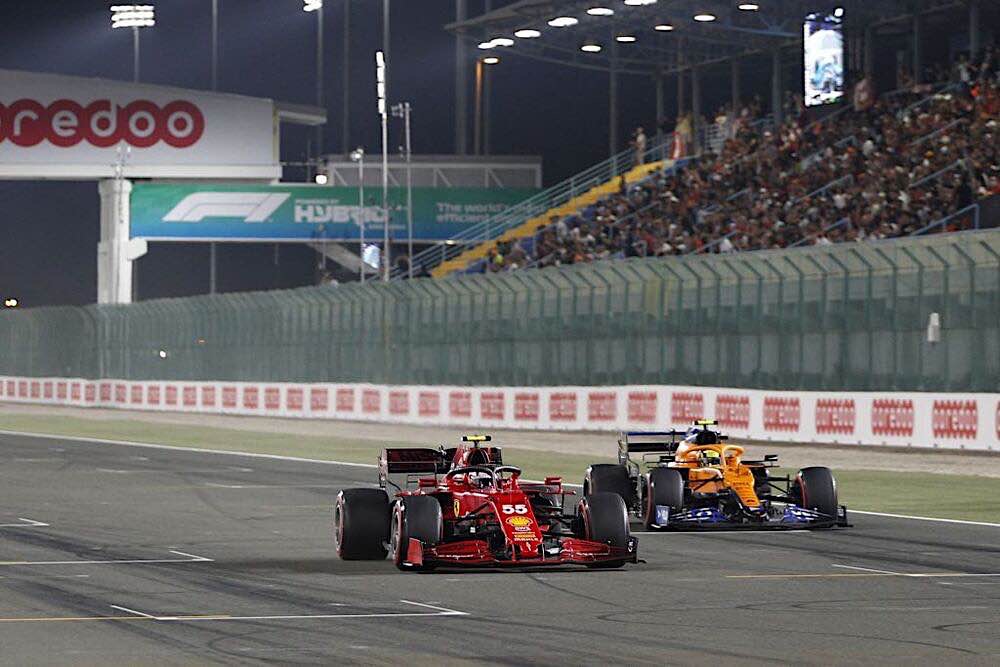 One of the most famous plays of the 1950’s is the perennial kiddies’ Christmas favourite, Beckett’s “Waiting For Godot”. Two  characters sit on stage, discussing when Godot will come, a few other characters come and go, but nothing much really happens. If Hamilton and Verstappen were the main characters, the rest of the grid the support, and Godot was a bit of racing, that play is an ideal metaphor for the Qatar race.

The Losall circuit was built between 2003 and 2004 by 1,000 workers as a motorcycle track and like many Middle east circuits is brightly floodlit, mainly to find an extra thing to annoy Greta with. Their website indicates it’s a proper circuit with some club usage, including local championships, karting, cycling, and track days for 400Qatari Riyal, which Google indicates is around £80. Clearly, it is the Gulf’s answer to Curborough, which is a compliment.

The event was obviously seen  in some quarters as part of the build up to next year’s football World Cup, including a “Grid to Goal” 6-a-side football match, featuring Carlos, Pierre Gasly and Valterri Bottas. All good fun, which sadly didn’t really continue for Ferrari in qualifying. Charles didn’t make it out of Q2, having suffered some kerbing in Q1 which later was identified as causing a chassis crack, in turn leading to an overnight chassis swap. Charles commented “I never felt that the tyres were in the right window and I was sliding around all the time, limited by the lack of grip.”

Carlos was pleased, given the issues the team had in practice at this new to F1 circuit, to finish 7th on the grid. He took the gamble of Q2 on mediums, the top three qualifiers (unsurprisingly Hamilton, Verstappen, Bottas) being the only others. Tyres would prove to be even more critical at Losall than normal. The lottery of a new track put Gasly, Alonso and Norris ahead of Carlos, with Tsunoda, Ocon and Vettel behind him. Yes, poor old Ricciardo is back to struggling. Gasly’s last run included a trip over the kerbs, puncturing a tyre and breaking a wing which stopped the car short of the finish. Yellow flags were obeyed by most, but not Bottas and Verstappen who respectively lost three and five places, promoting Carlos to 5th. He too was investigated for yellow infringement, but all was well.

Hamilton just drove off and won, completely unthreatened. Verstappen was not really troubled by starting in 7th, beating Bottas and Carlos before Turn 1, Alonso at Turn 2 and DRS’d Gasly on the pit straight, followed by passing Alonso in the same place on lap 5, and that was it for the top two steps. So far, so dull.

As for Ferrari, the team described the race as “well prepared and defensive” because of the tyre wear. “Charles and Carlos both looked after their tyres very well, without taking any risks and only pushing when they had to, backed up by the data that was constantly being monitored by the engineers.”, which was very satisfying for the fans who wanted to see them gain a further 8 point lead over McLaren in the battle for third.

Carlos sums up the race better than I could: “It wasn’t the most entertaining race today for us due to the amount of tyre management we had to do. As expected, the race start on the Medium tyre was tough for me and I struggled to fight with the cars around me. From there I just focused on extending the first stint to the maximum and then taking care of the Hard tyre during the first laps of the second stint. When I was told we were safe to push to the end I finally had some fun, catching Ocon and Stroll ahead of me. However, being stuck in a DRS train made it impossible to overtake so that was it. (7th)”  Ironically, tyre deg and DRS were introduced to spice up the show…..

Charles, like Carlos on a one-stop strategy, gradually rose up from a starting position of 13th to 8th, directly behind his team-mate.

If it’s a bit disappointing that the Ferraris were behind Alpines and Astons, think how frustrated Bottas must have felt with his team mate in an easy lead. He passed the pitted Alonso for 3rd on lap 23, but the pushing must have overstressed Bottas’s tyres as he had a puncture on lap 34, giving 3rd to Perez. Bottas rejoined in 14th but the car wasn’t right and he retired on lap 49.

While Hamilton and Verstappen had untroubled runs, Perez wasn’t quite as quick and his second stop dropped him down, only able to recover to 4th behind Alonso. He had initially also been behind Norris on a one-stop, but the McLaren driver also suffered a puncture (lap 49), dropping him down to 9th, which benefitted Ferrari’s 3rd place aspiration.

With newer tyres, Perez looked to be in a strong place to challenge Alonso for 3rd, to the extent that commentators suggested both Alpines would be brought in for precautionary new tyres to preserve the team points haul. Those commentators cannot know Alonso. Having already told the pits to tell Ocon to “defend like a lion” against Perez, any call to change tyres would surely have resulted in immediate retrospective radio and pit board failure. He would never come in, he’s Alonso. And he was blessed by Pirelli as Rusell (harmlessly) and Latifi (in a dangerous place) had tyre failures and the Virtual Safety Car was deployed giving a few easy laps. By the time the last lap was declared a racing lap, it was too late for Perez  and the former Scuderia driver had his first podium for 7 years. Sorry that it may be disloyal to Ferrari to enjoy success elsewhere,  but it was a joy to see that at 40 Alonso is still an outright racer.

(1) Although Ferrari had a decent points haul, this circuit didn’t suit the cars, due to tyre wear. To finish with only one tyre stop showed commendable, intelligent management even if it lacked full spectator engagement. Also, kudos to the team for managing a double-stack pit stop.

(2) The World Championship looks to be heading back to Hamilton.

(3) Has Alonso brought back racing to F1? Did Godot pop his head round the curtain?

(4) Nobody likes a conspiracy theory, but allow me to suggest a scenario consistent with some observations. Hamilton’s car (and to a lesser extent Verstappen’s) is very fast, not in outright speed but in lap times. However, we all know that aero efficiency allows top speed and downforce to be traded. Scuff marks have been seen on Hamilton’s rear wing, and the usually impeccable team were caught out by a wing gap 2mm too wide at Brazil. Verstappen has suffered wing failures, and when RB have been tweaking his rear wing, cameras have been excluded. Is it possible that both Hamilton and Verstappen are running legal but innovative rear wings that allow higher cornering downforce, reduced in some way on the straights?

It would be wrong to complete any report without paying tribute to Frank Williams whose death was announced on Sunday 28th November.  Probably the greatest ever exponent of the Cosworth/Hewland “kit” car, his cars were beautifully engineered, and his fierce, single-minded determination as a constructor was surely reflected in his personal life following his accident. One cannot but respect and admire rivals of such calibre and bravery. This website sends its condolences to the Williams family.