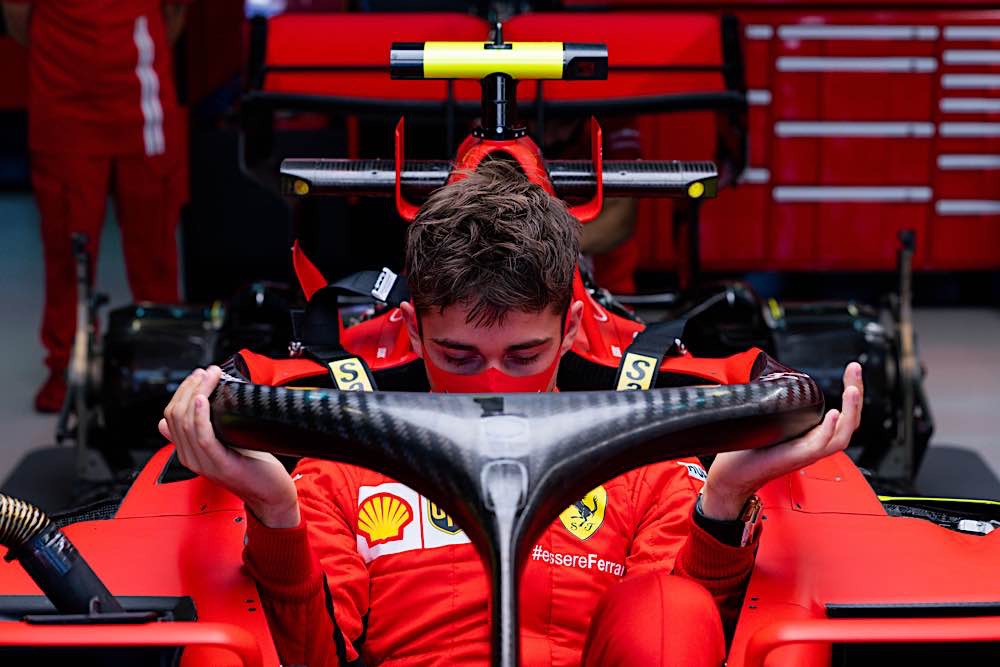 Charles lowers himself into the cockpit 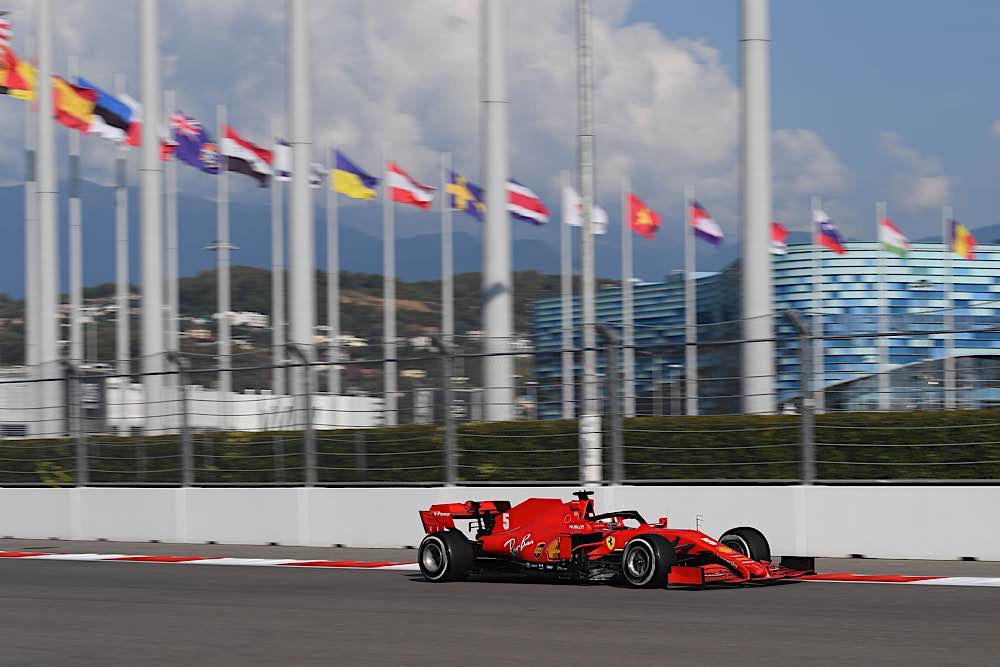 Flagpoles add to the interest of Sochi 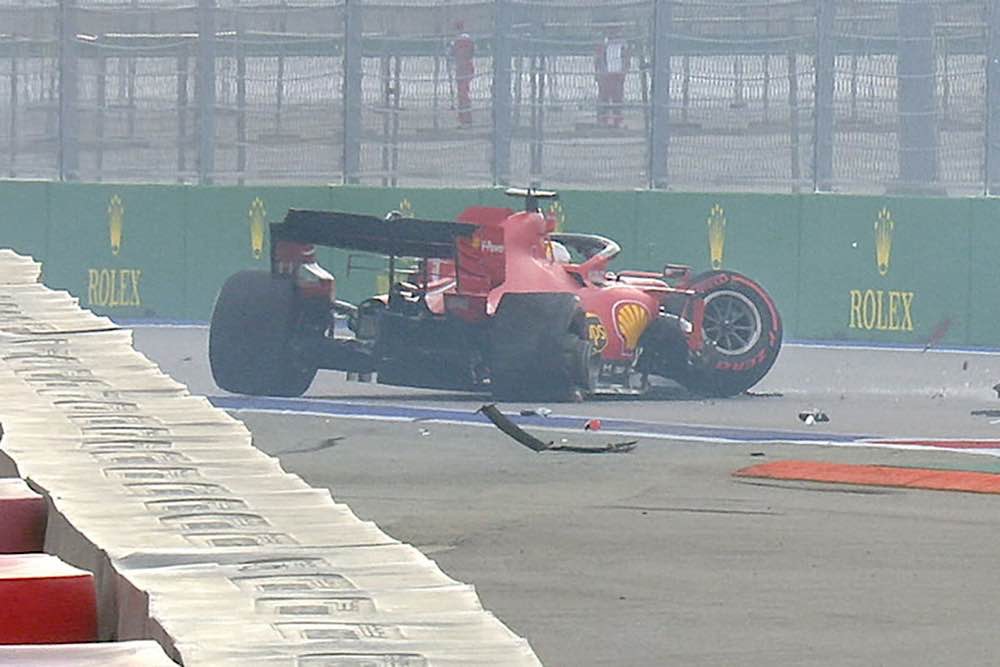 Seb's off had a big effect on the race

There’s the old saying of always be nice to people on the way up as you might meet them on the way down. Never having risen very far, it hasn’t really bothered me, but it must be in the mind of Christian Horner at RedBull. Just after Sochi, Honda announced that they would be ceasing an F1 involvement after 2021, so RedBull and AlphaTauri will be after a new donkey. Being Honda, it sounds like an engineering-led decision. Honda F1’s CEO Masashi Yamamoto said: “Honda needs to funnel its corporate resources in research and development into the areas of future power unit and energy technologies, including fuel cell vehicle and battery EV technologies, which will be the core of carbon-free technologies.” In other words, the half-way house of hybrids may be the right route for F1 and for hypercars like the SF90, but not for the everyday car which is Honda’s bread and butter. Their decision must be respected.

But where does it leave RedBull?  They can have few friends in the paddock. They have offended Mercedes by aggressively protesting their number 2 team of Racing Point, offended Ferrari with the never-proven engine protests and innuendos of last year, and openly criticised Renault as their previous supplier. The likelihood of Ferrari or Mercedes wanting them as customers is remote, so it looks as though Renault, with the smallest number of customers, will be forced under the rules to supply them. And of course, they will supply the latest specifications, identical to the works cars…….won’t they?

The question does arise whether RedBull could use a completely new engine. It seems unlikely that a major manufacturer would wish to join F1 in its current state. Rumours of VAG are surely wide of the mark, having nailed their colours firmly to the pure electric mast. So could RedBull commission their own engine? They have previous experience from their input to the much delayed Aston Martin Valkyrie of working with Cosworth, who are one of the few companies that have the credibility to produce so complex a power unit. And finally, despite strenuous denials, could the fizzy pop empire crumble as surely as the teeth of its drinkers, and we lose both teams so engines will in any case be irrelevant? Your guess is probably much more informed than mine, though the one certainty is that any decision will be based on financial return on investment. Unlike Ferrari, RedBull are not in it for the passion.

Meanwhile, back at the Sochi industrial estate race track, Ferrari looked to have adopted a damage limitation policy. Their subsequent analysis was that “minor aero updates introduced at Sochi produced positive signs, more in terms of future development than in an instant performance boost”, which sounds as though there is no magic bullet, but progress can be hoped for.

The key moment of the weekend was when, with little more than 2 minutes of Q2 remaining, Seb crashed. He hadn’t done enough to progress to Q3, so started 15th. Charles failed to improve at the restart and narrowly (0.05sec) missed Q3 for 11th. The “comfort” for both was to start on the tyre of choice, mediums.

However, Seb’s effect on Ferrari was far less than the effect his incident had on Hamilton. To understand the story, let’s go back to before the start of practice and the issue of the race director’s event notes. These are 13 pages long and pretty much like the final instructions issued to club racers, complete with pictures in case drivers are a bit hard of reading. As long as you stay awake it takes about 10 minutes to read the whole document. One would think this would be worthwhile.  It makes a big thing of track limits at turn 2, which has a large run off area and complex rejoin instructions. So whilst I give credit to Hamilton for being on the Villeneuve/Mansell wing of “always being fastest” rather than the Prost/Stewart approach of “as fast as it takes to do the job” there is a time and place. As a result of the absolute racer attitude he took too much kerb at turn 2 and had his time disallowed. He was on for a good time to recover the error in another late lap when Seb went off, and so the lap was aborted. He joined the pit lane queue at the back, and had little choice but to slip on the softs and do a very fast – desperate – out lap to beat the flag by a second, and then get through to Q3, but with the penalty of starting on softs. He would need a good race start.

The out lap isn’t usually significant, but at Sochi it was. Remember those event notes? Section 19 says “Practice starts may only be carried out on the right-hand side after the pit exit lights” and “cars may not stop in the fast lane at any time the pit exit is open without a justifiable reason (a practice start is not considered a justifiable reason)”. Also, do you remember doing exams when you were advised to read the instructions before starting? Well neither Hamilton or the usually reliable engineer Bonno had remembered either, and to make sure he got a good start Ham did a couple of practices, but where he fancied rather than the designated area. The result was two 5 second penalties which Hamilton learnt of during the race (and 2 penalty points, later withdrawn). He wasn’t a happy lad, later accusing the FIA of victimisation. Yes, they do tend to “victimise” people who don’t obey their rules.

When the lights went out, Bottas made a good start and challenged Hamilton, but couldn’t make it stick. He later said “it was a bit compromised because there was a massive bee that hit my visor; I couldn’t really see when I should brake, that’s why I went too deep.” We’re going to have to produce a new edition of the excuse book to add in that one.

The first lap was a bit chaotic. Charles was challenging Stroll, and minor contact resulted in a spin into the wall for the Canadian. Sainz had worse luck. Going wide at the infamous Turn 2, he rejoined via the “array of blocks”. I once got lost during a bandit sprint at Wellesbourne which was far better marked out, and that “array” did make me wonder whether the organisers had been to a motor race before. Sainz drove a reasonable line, but knocked his left front off. The whole thing is supposedly  there for safety, though obviously a sort of safety I’m too stupid to understand as it threw Sainz onto the track, fortunately without consequences apart from a safety car.

This left Charles eighth.  From then on, he did a perfect job of managing the tyres, which was the key to his race. Leclerc was actually the third from last driver to make his stop on lap 29, going from Medium to Hard. Charles ran at a consistent pace and made no mistakes, thus making up two more places, getting ahead of Pierre Gasly and Esteban Ocon, to finish sixth behind Daniel Ricciardo. Seb, who was taking part today in his 250th race in Formula 1, maintained 14th place and spent the entire race outside the points. He pitted on lap 31 to change tyres and in the closing stages, made a few passing moves, but still could not break in to the top ten. With refreshing honesty he said “I did the maximum today but I was just not quick enough.”

Hamilton’s penalty, taken at his tyre stop, promoted Bottas and dropped him to 11th. He gradually moved up to 3rd, behind Verstappen, at the finish. In the midfield, mid race, there was some exciting dicing between old friends Albon, Russell and Norris which petered out. Like many F1 events, the order was established mid race, and apart from Gasly, Albon and Norris disputing 9th and 10th, resolved in favour of Gasly and then Albon, it stayed unchanged to the end. After the inevitable top 3, Perez had one of his surprisingly effective days for fourth with Ricciardo behind him, our man Charles in 6th, and Ocon and Kyvat in 7th and 8th.

Following the race, Bottas sent out a grumpy message that the win was a (sanitised version) “flip you” to his critics. I suspect most of the readers of this website wouldn’t have found such swearing funny or appropriate, and would much prefer the attitude of Ricciardo when told a bodged position swap resulted in a 5 second penalty. “My bad. Sorry. I’ll just have to drive a bit faster.” An Australian Gentleman trumps an unfunny Finn.

Mattio Binotto showed some welcome optimism: “To sum up the weekend, it was a step forward, at least compared to recent races, both in terms of the result and our performance level. We must continue moving forward like this, starting with the next round in a fortnight at the Nürburgring.”  The journey of 1000 miles begins with a single step. Let’s hope.