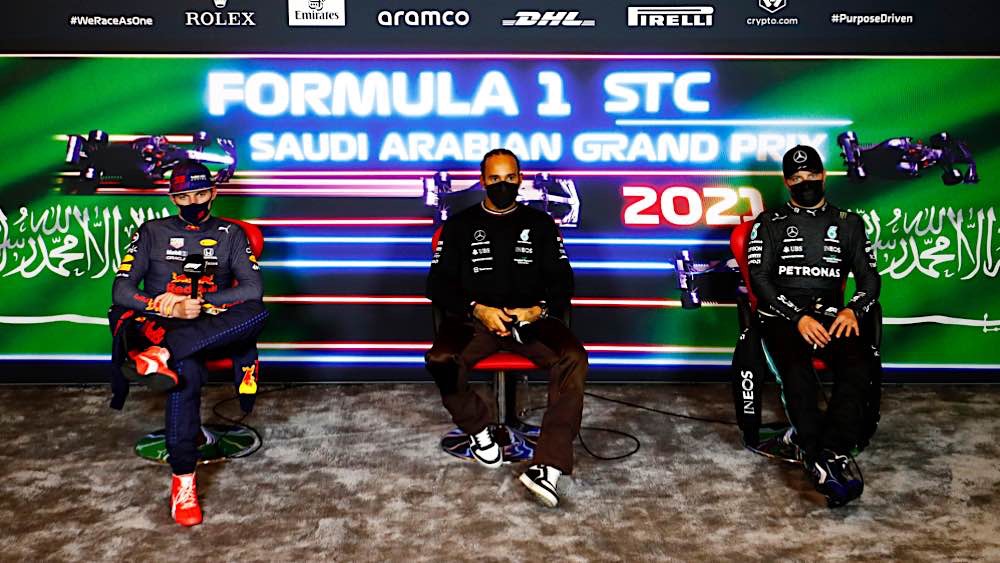 A slightly icy press conference after the race. 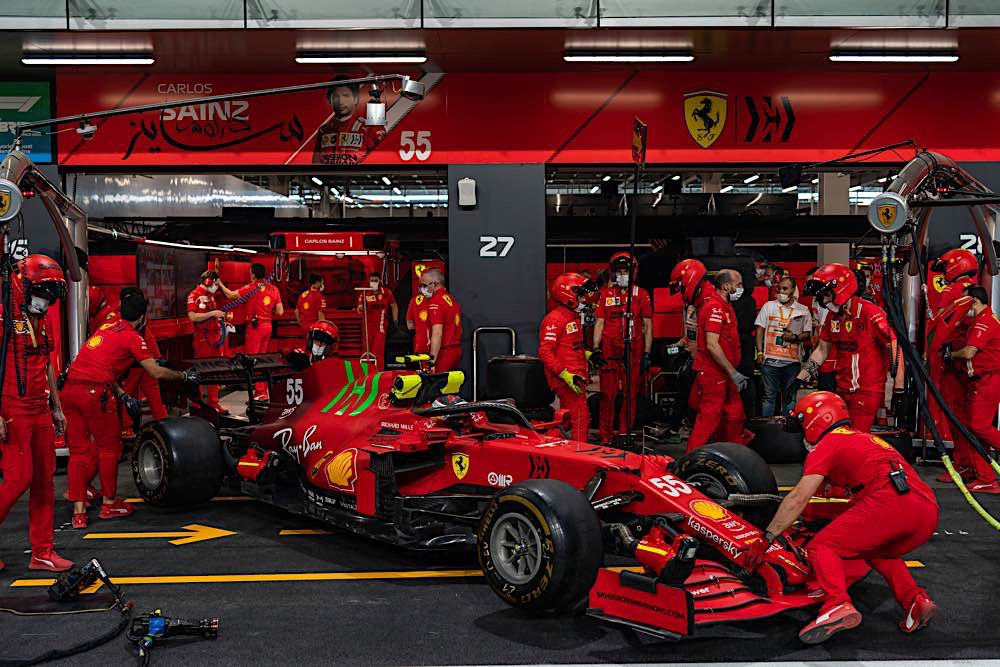 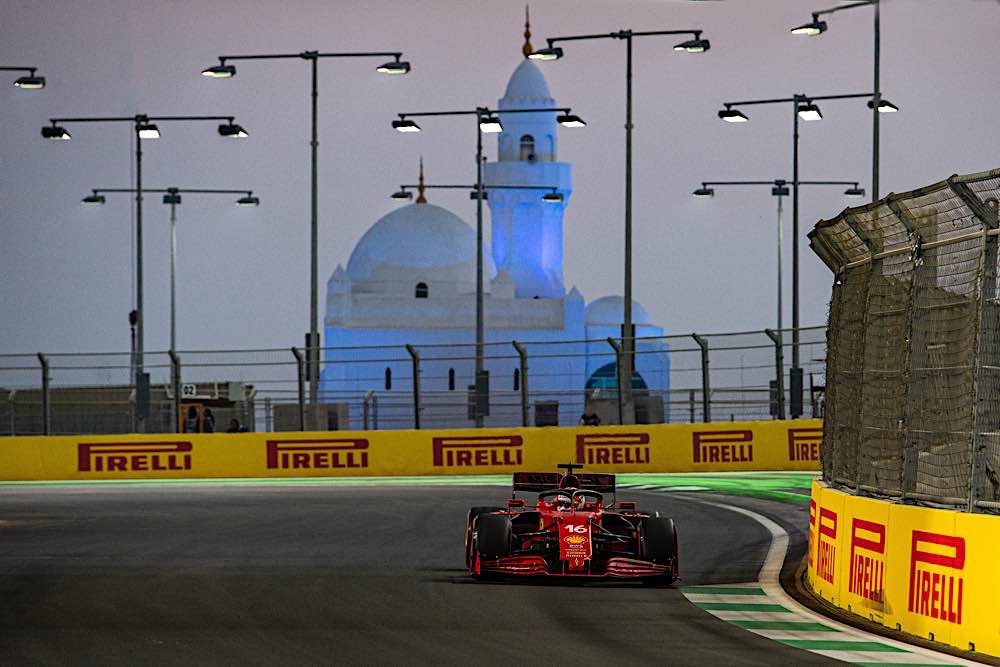 A racing car, a mosque, a fast street circuit. This could almost be Birmingham Superprix.

After a fractious inaugural Saudi Arabian Grand Prix the Championship contenders enter the final round next weekend in Abu Dhabi on equal points following Lewis Hamilton’s 8th victory of the season. For the Tifosi the race all but confirmed Ferrari will finish 3rd in the Constructors table, a sizeable move in the right direction after a poor 2020.

Motorsport news over the past week has been dominated by the passing of Sir Frank Williams, aged 79. His life was celebrated over the weekend with demonstration laps by Damon Hill and Martin Brundle in the first Williams GP winner, the FW07. Numerous tributes have been made to an individual who never gave up, despite horrendous injuries suffered in a car accident in 1986 which left him wheelchair bound for the remainder of his life, but didn’t stop the subsequent glory years of Mansell, Piquet, Prost, Hill and Villeneuve (J) and of course the loss of Senna.

On a personal level one memory stands out; in 2018 I attended a Williams GP hospitality day based around the Brazilian Grand Prix; after a day of activities we all sat down to watch the race, live in the Williams conference centre, only to be joined just before the race start by Frank. He sat with his guests and happily chatted to us all after the race had finished; I can think of no other team owner who would do similar, the ‘sport’ having seemingly lost contact with real enthusiasts, but Frank seemed very happy to be engaged with motorsport fans, many of whom went home that day as firm Williams supporters.

The Saudi GP was a late addition to the 2021 calendar, with the ‘street’ circuit constructed from scratch on barren land in Jeddah in 9 months. While in nature a ‘street circuit’, with few run off areas and walls defining the edge of the circuit in many parts, it is also very fast, becoming the second fastest GP circuit of the year, behind Monza. No wonder the current F2 leader called it ‘Silverstone with walls’ as lap times were 150mph+, but perhaps more worryingly the circuit incorporated numerous blind corners where the potential for someone to have an accident and then be collected by another car was huge; thankfully the F1 circus were lucky this weekend, but George Russell as a GPDA representative has asked for circuit changes before the second GP next April. One FIA query I have is why should Spa/Silverstone and many other circuits be required to have huge run off areas when Saudi and Baku, high speed street circuits, don’t?

Practise on Friday commenced with Mercedes apparently on the ascendancy, both cars a little quicker than Verstappen in his Red Bull, with Perez struggling, as were the Ferraris, with Carlos and Charles 7th and 10th respectively after the 2nd session. The daylight practise on Saturday morning suggested Red Bull had refined their set up, while Ferrari remained 7th and 8th.

Qualifying in the night skies brought slightly lower temperatures, with all teams trying to qualify on the ‘medium tyre’ in order to be competitive in the race as the soft could not cope with the combination of high speed and temperatures for more than a few laps. Charles managed to achieve this, 8th fastest in Q2, but Carlos had a qualifying session to forget, firstly having his time disallowed due to track limits, and then spinning on his second attempt and lightly damaging his rear wing. A final attempt again resulted in a half spin so a 15th place start was the result. Charles meanwhile went back onto the softs for Q3, and put in one of his special laps to be 4th fastest, less than half a second from pole. This perhaps inevitably was occupied by Lewis Hamilton, despite Verstappen being apparently quicker, but he overcommitted into the final corner and found walls don’t bend as easily as stewards, so he finished the session 3rd with only 3 wheels on the car.

With a Mercedes lock out of the front row Vertappen’s  8 point lead in the World Championship from Hamilton was severely under threat, and as the race started no change resulted so the first 10 laps or so was very ‘follow my leader’. This all changed after Mick Schumacher hit the wall in his Haas, firstly necessitating a safety car, which Mercedes used to their apparent advantage to change tyres to the optimum hard compound, while Verstappen stayed out. A red flag was then shown as the barrier damage was extensive, allowing a free pit stop for Red Bull and a pole position restart position. Max fluffed the second start, and in trying to offset his mistake drove off the circuit at the first corner to retake the lead, forcing Hamilton to lose 2nd place in the process to Ocon.

Unfortunately this was not the end of the action as Charles and Perez collided on the exit of turn 2, neither really at fault as there was no room, with Perez causing Russell to break hard and being hit violently from behind by Marzipan; the second Haas was out on the spot, and another red flag shown.

A third start was thus needed, but Verstappen obviously needed a penalty as he had re-joined the race in a dangerous way and from off the race track. (Why no ‘chicane’ slip road as at Sochi ?). After the race director  held negotiations with Red Bull it was agreed he would line up 3rd behind Hamilton and Ocon, but this did not stop him taking the lead at the restart with a brilliant inside pass at turn 1 while Hamilton fought with Ocon on the outside. The race then came down to tyre strategies as Max had restarted on the medium compound as the remaining race distance was only 35 laps and they were ‘good’ for at least 30. Meanwhile Hamilton was on the hard tyres, good for 40 plus.

As the race wore on it became evident Mercedes had made the right choice; Hamilton initially tried to pass Max on the outside of turn 1 on lap 37, only for Max to lose control, and force Lewis off the road and regain the lead. At this point the race became absurd as the race director instructed Red Bull to give Lewis the place back, which he tried to do just before the DRS detection line; Lewis was not aware of the ruling, so was reluctant to pass, so Max gave Lewis a brake test in the middle of the road, resulting in Lewis damaging his front wing in the resulting collision. The Mercedes was not badly damaged, and although Max tried to build a gap his tyres were past their best and eventually Lewis got through and went on to win the race. Subsequently Max was penalised 10 seconds (!) for his brake test; something the Red Bull pantomime principals Horner and Marko stated he had not done. Whatever, the soap opera continues to the final round with both drivers level on points, and in my opinion on 8 wins apiece. Officially Verstappen has 9, but this includes Spa, where the race was abandoned before a racing lap occurred.

Behind the title protagonists Charles initially had a good race in 4th, but on the 3rd restart was swallowed a little by the pack and ended up racing Carlos for 7th place (a la practise); while Charles had started on the Mediums, he was now on the better race tyre while Carlos having made great progress on the hard tyres in part 1 was now on the mediums. They were pretty inseparable for the whole race, with Carlos having to cede 7th at the end to Charles as his softer tyres fell away. Thankfully they conceded only 1 point to Mclaren in the manufacturers’ championship as although Ricciardo managed 5th, benefitting from the free tyre stop after part 1, his team mate Norris suffered badly as he stopped under the safety car and was then condemned to a race at the back eventually finishing 10th. Ferrari are now 38.5 points ahead of Mclaren, and as 43 is a maximum haul in any 1 race 3rd place is all but confirmed. Similarly, Mercedes are now 28 points in front of Red Bull in the manufacturers championship, benefitting from Bottas’ eventual 3rd place (compared to a Perez retirement), narrowly passing Ocon on the line to secure a podium finish.

The remaining point scorers were 6th for the ever impressive Gasly,  9th for Giovanazzi’s Alfa and 10th for Norris. Antonio followed up his excellent 10th in qualifying, to finish 9th, only his second points finish this year before his final GP next weekend, and then a future in Formula E. Bet he can hardly wait. Meanwhile in the similarly Ferrari powered Alfa, Raikkonen could only finish 15th after a skirmish with his old Ferrari team mate Vettel.

So Liberty Media have a grandstand finish to the season; let’s hope racing triumphs over controversial incidents, and remember if both protagonists fail to finish in the top 10 Verstappen wins due to more race victories…

Final preparations are underway for the National F

It takes more than a little ice to stop our member

We celebrate our members braving the elements this

Something a little different for this #FerrariFrid

It's been a busy day today at @classicmotorshownec

We are live at the @classicmotorshownec this #Ferr