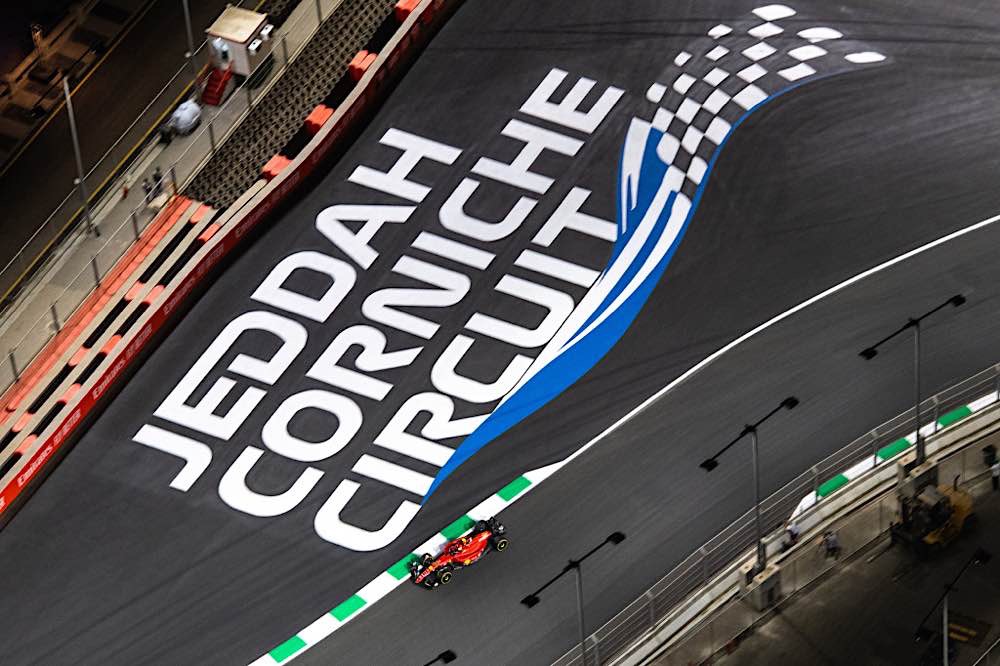 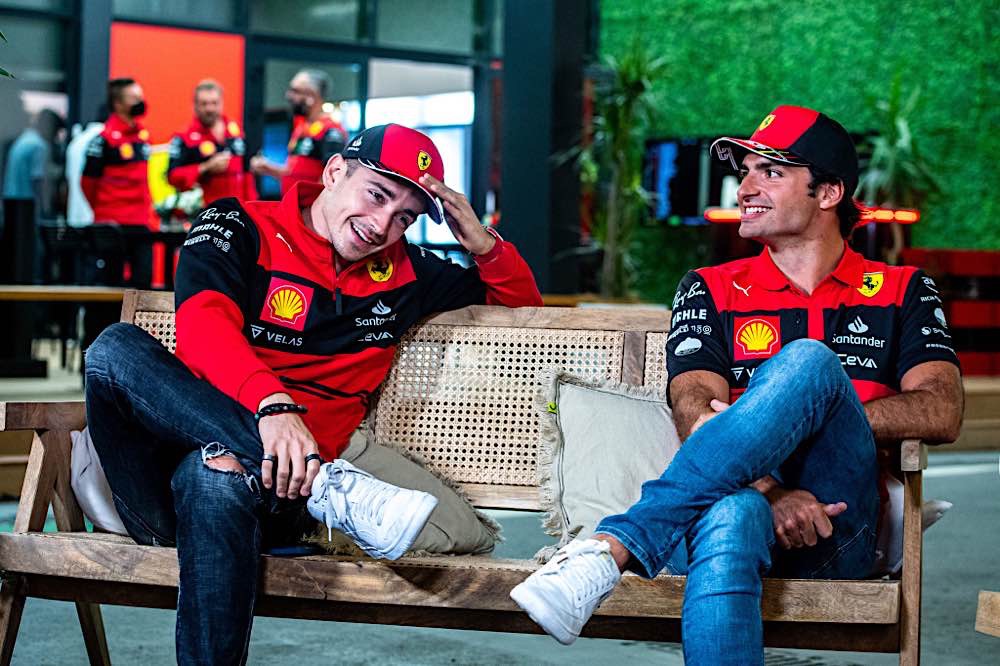 Two youths hanging about on a park bench. 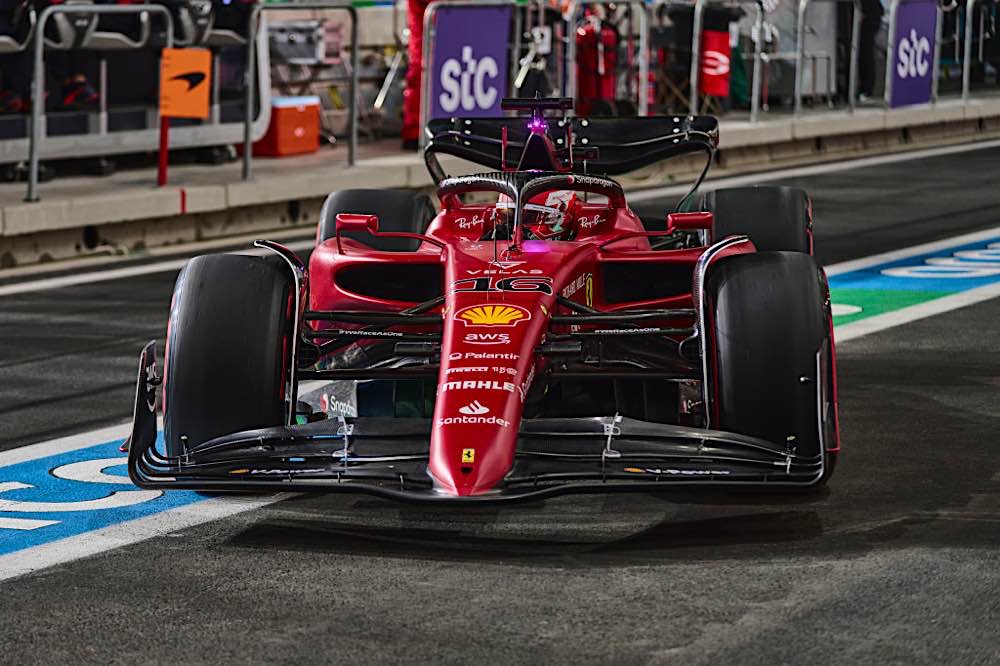 Still the best looking car on the grid.

“Always be good. If you can’t be good, be lucky. And if you can’t be lucky keep detailed records for the lawyers.”  I assume the FIA have heeded advice similar to this, because while the Saudi Arabian Grand Prix was undoubtedly an interesting and exciting race, with less luck it could have been very different.

The first issue is the country. F1’s social consciences, Seb and Lewis, have both voiced disquiet, though in fairness Saudi Arabia does just avoid the “Top Ten” of poor human rights. However, during final practice, Yemeni Houthi rebels attacked an oil facility about 10 miles from the circuit on Friday afternoon, causing long debates amongst the drivers about their safety. Team managers seemed to be more sanguine, doubtless checking first with their security advisers.

Of more immediate and ongoing concern to the drivers was the track itself. As my colleague Nigel Bland said last year, how a track which is so fast, but blind and with little run off, could have been added to the calendar when Spa has to spend millions on run off is puzzling. Add to this a new car framework which brings in a level of unpredictability due to the aerodynamic changes arising from the return of ground effect and its bedfellow of porpoising. To see Lewis’s head on the practice in-car moving about at what seemed to be a regular 1 to 2Hz was scary. Remembering the 80’s, I also seem to recall that when ground effect cars let go, the downforce went rapidly rather than bleeding away. All of this sounds a recipe for disaster, yet narrowly and thankfully, it was not.

Though a freak of the time when drivers ran, Haas headed the timing for a while in Q1. They’ve obviously improved, due to both the new Ferrari engine which now seems to be as good as any, and a supposedly Ferrari-influenced chassis. Nicholas Latifi, rapidly making a name as the Pastor Maldonado of the 2020s, parked assertively into the wall, stopping the session, after which Carlos took top spot. And yet few eyes were on the victor of Q1, since down amongst the Williams and Astons, Lewis Hamilton was fighting with a car which was noticeably less comfortable than his team mate’s. An attempt at pushing the aero envelope had clearly misfired. A quick run by Stroll demoted him to 16th, the first shock of the afternoon.

As Ferrari and Red Bull then slugged it out for the pride of Q2, Schumacher’s car let go and crashed heavily.  After checks he was deemed unhurt, but too shaken to race on Sunday. It was said that part of the increase to 795kg in the weight of the car was due to safety features, and if that is the case then it’s justified, but there’s always the nagging doubt that a lighter, more nimble car with less momentum might avoid some of the accidents.

Carlos and Charles led when the session was resumed after an hour, but the one that mattered saw Perez have one of his periodic flawless laps. Charles had set an impressive 1:28.225, with Carlos on 1:28.402, but “Checo” edged them both with a 1:28.200. His team-mate was just behind Carlos with Ocon and team-mate Alonso in 5th and 7th, sandwiching George Russell whose Mercedes was somewhat less disastrous than Hamilton’s. Two more Ferrari powered cars (Bottas’s Alfa in 8th and Magnussen’s Haas in 10th) completed the top ten with Gasly’s Alpha Tauri unable to pull the giant killing tricks of 2020 in 9th.

There was minor drama before the start as Tsunoda’s car failed, which gave some food for thought after the RedBull Power Train failures in Bahrain.

Charles had a slightly disappointing start, allowing Perez to drive away, and worse still he got into a minor tussle with Carlos which allowed Verstappen to challenge and take 3rd by turn 2. Perez pitted on lap 15 for hards which would take him through to the end of the 50 lap race, but left him 5th, behind Russell. Almost immediately, crash-enthusiast Latifi put his Williams into the wall, bringing out first a virtual then a real safety car, allowing everybody to save about 10 seconds on pit stops. Charles and Max retained their places, but Carlos emerged from the pits ahead of Perez, who thought otherwise and passed him. There was much debate, but fortunately the stewards saw sense and required him to return the place at the restart. This wasn’t entirely to Carlos’s liking: “Having to wait for the restart to get back to third meant I could not try and fight for second place.” Was that the RB plan all along? To think so would imply Red Bull place sportsmanship behind winning.

It soon became clear that Verstappen was closing on Charles and by lap 29 he was within 1.4 seconds.  Carlos continued to hold off Perez, while tyre choice had promoted Hamilton to 6th, behind Russell, after he had passed Magnussen’s Haas. Who would have thought that a possible scenario a year ago?

The new cars seem to have lost some reliability, which is surprising as the main changes are in the aero. On lap 37, hapless Ricciardo stopped at the pit entry. Magnussen pitted but his sparring partner, the (currently even more hapless) Hamilton didn’t make the split second decision fast enough. Never mind, next lap would still be VSC…..except Alonso broke down as well, also heading for the pits. So the pitlane was closed as the cars were recovered, and didn’t re-open until lap 41 when the VSC ended. Hamilton P12. I should add that the descriptions of Hamilton’s woes are not reported as a matter of schadenfreude, but because they illustrate the knife edge at which the sport is played out at the top level. Is the aero on his car bad luck or bad judgement?

Verstappen grew closer to Charles, and then with DRS closer still. A lap after the restart, Verstappen passed Charles, but in a repeat of Bahrain the close following allowed by the new rules meant Charles could fight back and retook the lead on lap 43. More dicing, and a little bit of silliness when the fast driving and slow thinking Verstappen realized that passing could be a disadvantage, and so there was an F1 equivalent of a primary school slow bicycle race. At the start of lap 47, the Dutchman made it stick. There was still excitement as Charles tried to re-pass, but a coming together of Albon and Stroll caused yellow flags, meaning Charles had only the last corner of the last lap to try to recover first. It was close, but not close enough, and Verstappen took his first win. Charles of course still leads the championship with second, with Carlos’s third place maintaining him as closest championship challenger.

Perez had an incident free run to fourth, while Russell showed that the new Mercedes can’t be all bad with 5th, his team mate coming 10th and asking where he was, and was there even a point for it? It was good to see the rest of the points spread out amongst the teams with Ocon 6th for Renault, Lando 7th for McLaren, Gasly 8th for Alpha Tauri and Magnussen 9th for Haas. Yes, a Haas ahead of Hamilton, and on merit.

The body language of the first two after the race clearly showed they had enjoyed it, and Charles confirmed it: “Although I’m disappointed to lose the victory so late in the race, it feels good to be fighting for wins again. Whenever I had a bit of margin to Max, I could manage the race well. But after the Virtual Safety Car, as soon as he got in the DRS range, it became difficult. He was fast in the straights and I was fast in the corners. It was a really fun battle! I hope it stays this close for the coming races. It’s exciting to watch and to drive like this.”

Were the risks of a track, which is close to terrorist action and has a challenging and controversial layout, well managed or was luck smiling on F1? Spectators and drivers both went home happy, TV viewers stayed home happy, and the teams’ and Liberty’s accountants were probably happy. And even better the Tifosi were happy(ish).