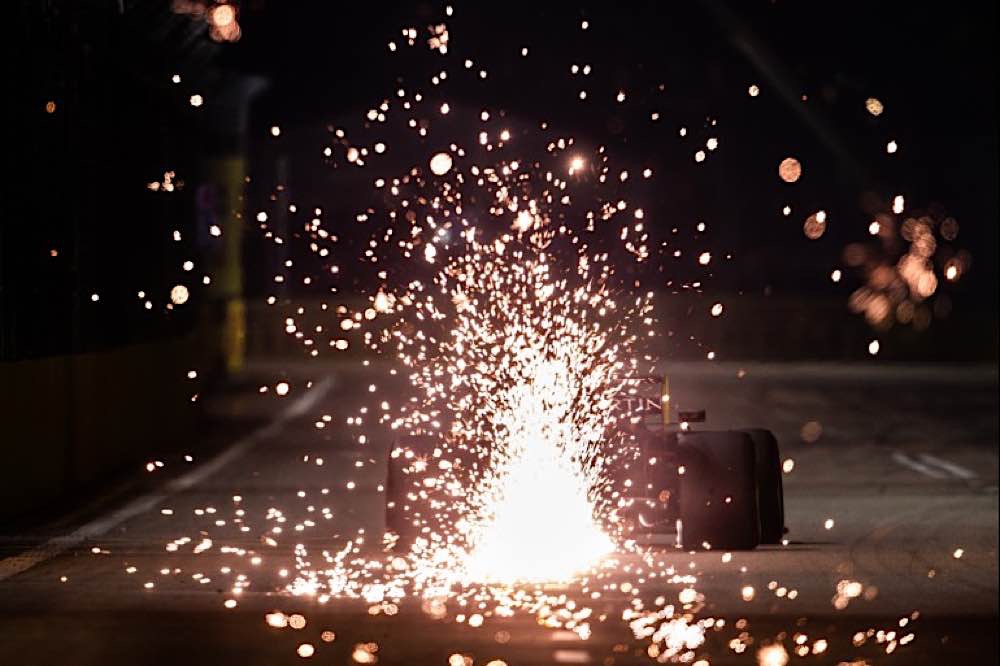 Sparks always fly at Singapore. In this case, literally. 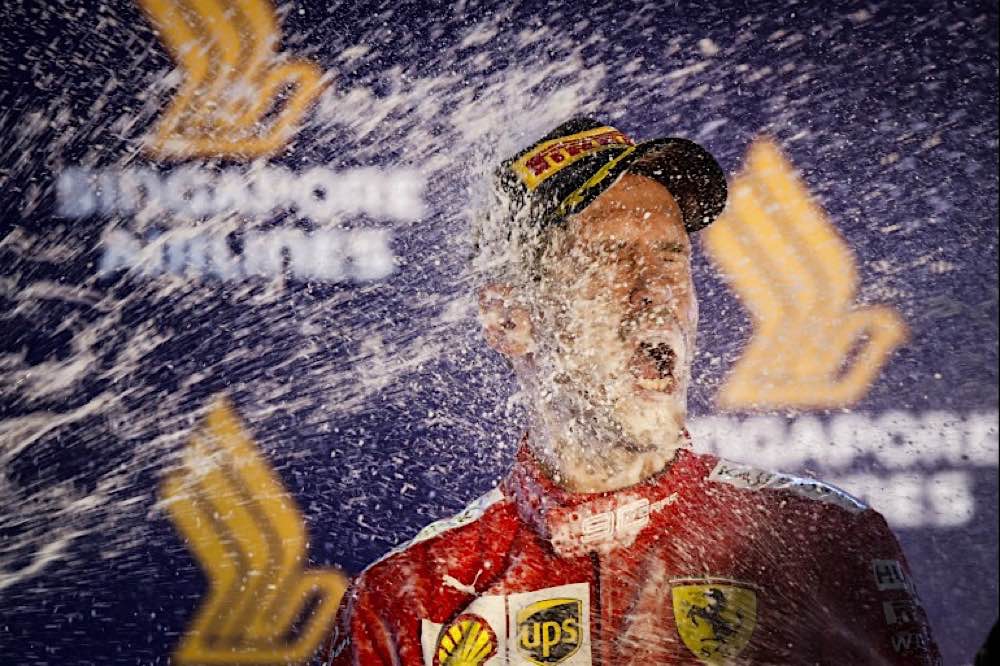 A while since we have seen this scene. 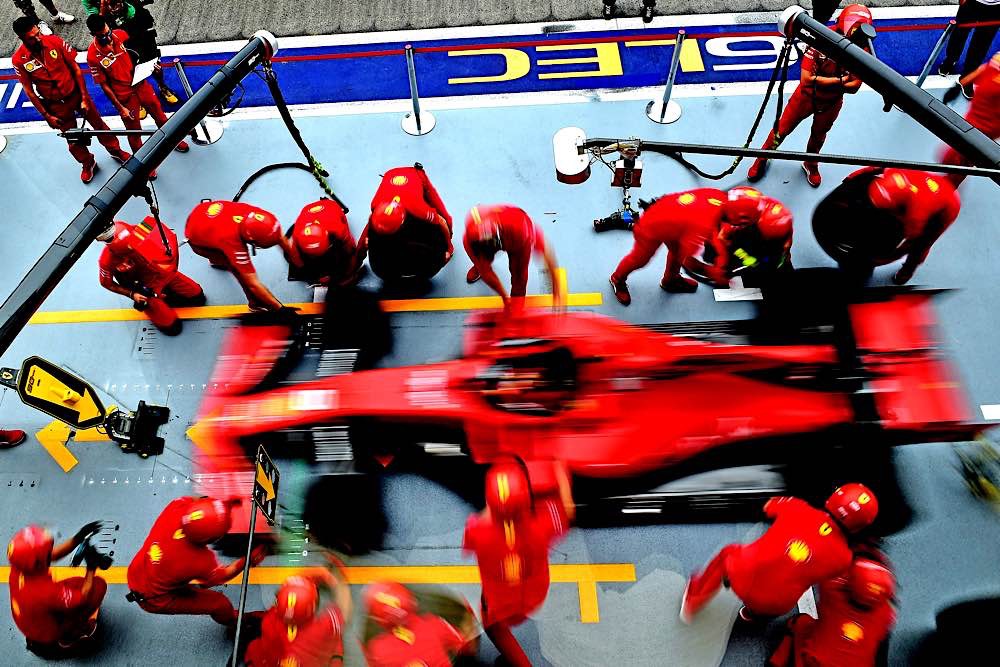 A stop for Charles

It’s interesting to think of the ethic of race teams. Williams have always been an engineering company that happens to make F1 cars. Red Bull are a fun loving fizzy pop company that ruthlessly sacks drivers. McLaren are grey and serious (or used to be). And Ferrari are a sporting team devoted to winning F1 races and championships.  All unfair summaries, certainly, but there’s no doubt that on Sunday the question Ferrari asked was “what will be best for the team?” and not “how can my driver win this race?”. That Leclerc showed a slightly petulant side for the first time on Sunday might mean he hasn’t quite grasped the ethic. After all he was only 12 years old when the (in)famous transmission “Fernando is faster than you” was made to Felipe Massa. Or it may also mean that underneath the polite young man he has the hard edge of a champion.

Qualifying
It came as a major surprise that  there would be a need for race winning tactics from Ferrari. Even as qualifying started, the experts were explaining how the tight Singapore track suited Mercedes and Red Bull. Even my esteemed colleague Nigel Bland tipped Red Bull for success. But there had been some significant aero developments which work at lower speeds. And so Q1 gave hints that Ferrari should not be written off. Charles was 3rd, but about half a second behind Hamilton. When Q2 arrived he improved his time by 1.3 seconds to be at the front, Seb just behind. And in Q3 Charles was 2/10s ahead of Hamilton with Seb in 3rd, on the same tenth as The Ham. The Red Bull promise was vaguely fulfilled with a 4th slot for Verstappen, while the number 2s symmetrically filled 5th (Bottas) and 6th (Albon). McLaren and Renault filled the top 10, Sainz in 6th being half a second ahead of Norris. A very disgruntled Ricciardo started from the back due to his MGU-K producing too much assistance for a lap in Q1 (when he was 1.3 seconds slower than Q3, which was legal). Oh for the simpler days when BRM would win Spa by running the 3.3 litre (allegedly).

Charles had a cracking start and was over a second ahead of Hamilton at the end of lap 1. Hamilton was delayed a little due to battling with Seb, who had been using the reported additional power of the latest generation engine to good effect. Nonetheless, there was a further 1 second gap from Hamilton to Seb, mainly due to aero interference. Further back in the field, Hulkenberg and Sainz had collided in a racing incident, though Sainz was aggrieved. They struggled back to the pits, while George Russell also pitted with a puncture from being sandwiched by Kubica and Ricciardo.

Strategy started to come into play as early as lap 2. The Ferarris were thought to be harder on tyres, so a slower pace would help longevity. Charles eased off, and the field bunched slightly, making under-cuts more difficult, though not impossible. A failed undercut by Kyvat on Perez created a gap just where a pit stop would return a car to the field, allowing a charge to gain time. But overtaking would still be required and Singapore is somewhat difficult in that regard. Pitting Charles early might have been considered irresponsible because while he might have gained some time in the gap, he could then possibly find himself caught in a safety car period, with Hamilton then on newer tyres. So if an undercut was to be done, Vettel was the man to do it, to get ahead of Hamilton for a 1-2 and pre-empt Verstappen from doing it to him. If it worked, it would be excellent because there hadn’t previously been a 1-2 in Singapore…….

It happened on lap 19, and Seb rose to the challenge. Perhaps more so than was expected because he gained so much time that not only did he get past Hamilton but also past his team-mate. The problem was that the softs on which they had started were, even with the slower pace, wearing less well than anticipated, so while Seb over-performed, Charles, through no fault of his own, underperformed. Verstappen had followed Seb into the pits, so his strategy, and the outcome, shadowed Seb. Hamilton stayed out until lap 26, and this might have been too long even for the tyre-preserving Merc. It was a question of betting how long the softs would stay good and how well the hards would perform, as well as second-guessing the undercut gaps. Only players of 4-dimensional chess need apply for the job of strategist.

Finding himself in an unexpected second, Charles was what might be termed “a bit disappointed”. Several times he ranted on the radio, damaging his “nice boy” image, but showing the sort of ruthless streak of ambition we all so admired in Schuey and Senna. As the pit stops unwound on lap 33, Seb led from Charles, with Verstappen 3rd and Hamilton 4th. It would have been worse for him had Bottas not been instructed to back up the rapid Albon and Hulkenberg leading up to his pit-stop. Whilst Hamilton would have benefitted from an earlier safety car, the cards went against him when there were three safety cars.

The first was caused when Grosjean – who else? – misjudged an overtake of George Russell. The fates dictated that Russell was out. The safety car was in play for 5 laps, which was welcome relief for Seb’s tyres. On lap 44 the safety car came out for another 4 laps as Perez stopped his Racing Point in a difficult place having been told to by his pit. Seb must have thought Christmas was early this year and Hamilton and Verstappen must have cursed the Mexican. Charles was still sulking when not allowed to chase Seb by pressing some of the magic power buttons.

The final safety car happened as Kyvat tried to pass Raikonnen. The stewards’ report states that both drivers agreed it to be a racing incident, but that didn’t stop Kyvat from proclaiming afterwards that “Raikonnen suicided himself”. Kimi was too laid back to respond.

Racing resumed on lap 52, but there was no change of position. Seb from Charles, Verstappen from Hamilton. There was some tension as to whether Hamilton would jump Verstappen, but it didn’t happen. 5th was loyal Merc wingman Bottas, and Alexander Albon in 6th, looking over his shoulder to see if the performance is good enough to satisfy the fun-loving management of Red Bull, with Lando Norris producing another solid performance to take 7th and best of the second division. Oh, isn’t it fun to patronize McLaren! Gasly was eighth, trying to demonstrate that RB had made the wrong decision by pressing hard on Norris. Hulkenberg took 9th despite his first lap issue, making one wonder what a bit of prudence might have led to. Finally Giovanazzi, despite a 10 second penalty, was 10th.

Perhaps a special award should go to Ricciardo who, despite starting at the back, managed 14th. And a special consolation prize to Magnussen who had been running a worthy 10th until a plastic bag lodged in the side pod, necessitating a stop, but with an overall fastest lap of 1min.42secs, 1.3 seconds faster than Bottas, who got the fastest lap point just because he was in the top 10.  All the finishers were, thanks to the safety car periods, on the same lap 61.

A historic 1-2 for Ferrari should have been joyful, but Charles showed his annoyance at having to be a team player which took the edge off the celebrations. He later calmed down and admitted that there were facts of which he was unaware. Perhaps even more significant for the long term (ie next year) was that Seb had scored a victory. Some “experts” said that it wouldn’t mean as much to him because he was gifted it by strategy. I suggest that those “experts” have never competed. A win is a win. He sounded relieved and happy after the race, and ready for celebrations. I think most Ferrari fans were happy to join him and the team in those celebrations after such a successful race. Remember I said that Ferrari are a sporting team devoted to winning F1 races and championships?  Whoever was first or second doesn’t matter. For the fans, the team is the winner. May it continue….