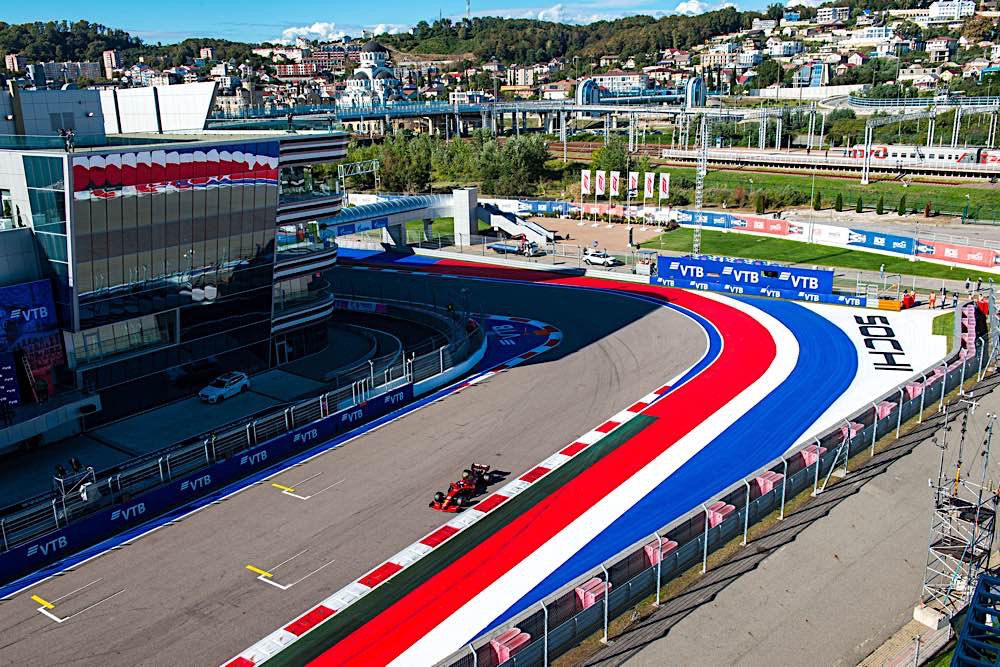 A prominent railway line, dramatic hills and a seaside location; Sochi is known as the Colwyn Bay of the Black Sea.i 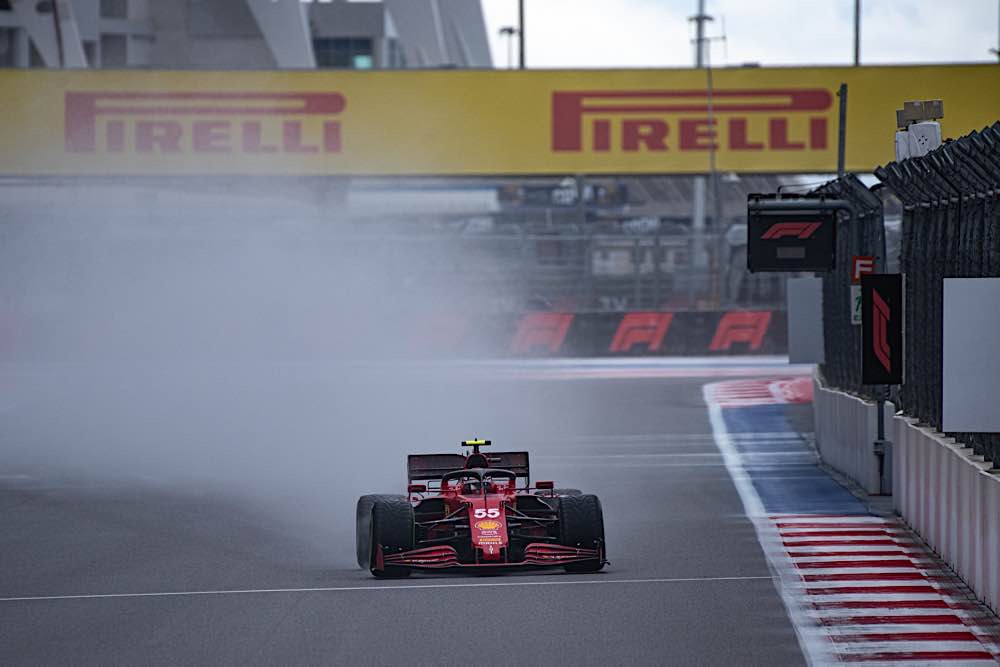 Rain played a big part in both qualifying and the race 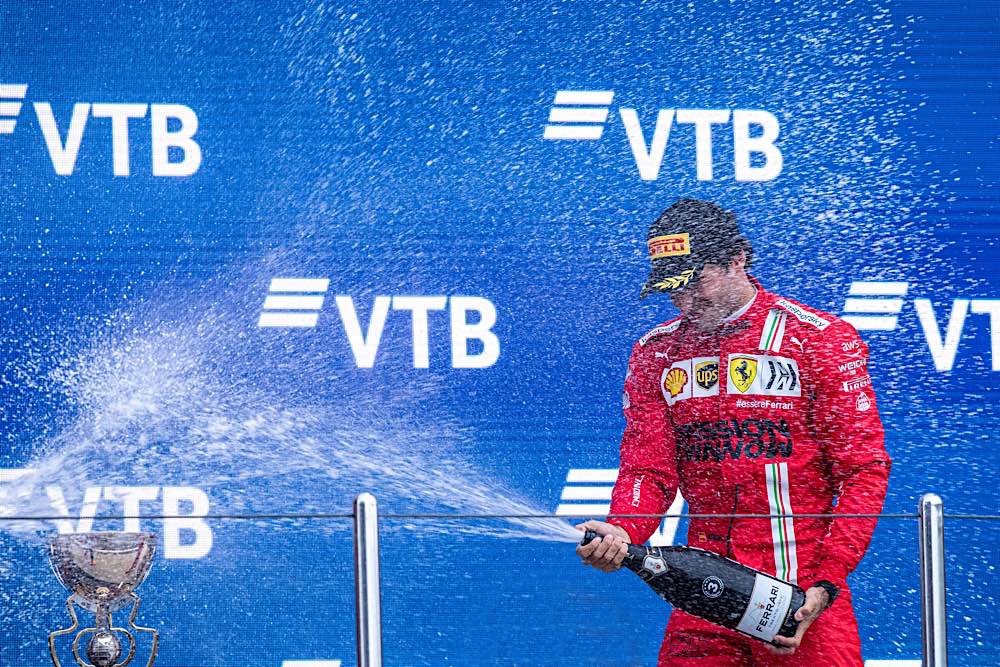 A podium for Carlos

Report adapted by Tony Cotton from Ferrari Media and FIA.COM

Scuderia Ferrari took its fourth podium of the season in the Russian Grand Prix courtesy of Carlos Sainz who came home in third place. Charles Leclerc, who was starting from the back, produced a masterly performance but came away empty handed after the final crazy stages of the race when the rain fell.

Lewis Hamilton took a record 100th Formula 1 victory as the rain in the final laps saw McLaren’s Lando Norris slide out of the race lead and out of contention for his maiden F1 win and which allowed Max Verstappen to rise to second place after starting the race in last place on the grid. Whilst Hamilton’s century is rightly lauded as a unique achievement, he undoubtedly had a strange weekend, driving into his jack man in practice and the pit wall in qualifying. Cue inevitable jokes about the jack man being given a 3 place grid penalty, and the wall reprimanded for not giving enough space. Your usual reporter was so downhearted by the inevitability of history in the former Soviet resort that this report is plagiarised (sorry, adapted) from the non-copyright FIA and Ferrari Media reports, to whom thanks are due.

Carlos Sainz secured the best qualifying result of his Formula 1 career, qualifying on the front row for the very first time. Charles Leclerc only took part in Q1, even though he made it through to the next part, given that he would start from the back of the grid  because of taking on a new power unit [=engine, Ed]. He just did a few laps to get a feel for the SF21 on a wet track.

Heavy rain throughout Saturday morning and into the early afternoon meant that final practice was cancelled but in the hour before the scheduled start of qualifying the sun began to appear and conditions improved enough to allow the session to go ahead.

Eliminated at the end of Q1 were Alfa and Haas, and Verstappen who saved both his PU and his tyres knowing he had a penalty.

Vettel missed out on a Q3 berth by just five hundredths of a second. Eliminated in Q2 behind the German were Gasly and AlphaTauri team-mate Yuki Tsunoda, Williams’ Nicholas Latifi  and Charles.

In Q3, some parts of the track were still damp, but a dry line was emerging. As the drivers went out on inters it quickly became clear that the crossover point to slicks was close. The field opted to put in banker laps on intermediate tyres and after the first runs Mercedes’ Lewis Hamilton led the way from Bottas.

However, rivals were already pulling into the pit lane to take on slick tyres to take advantage of the steadily improving surface. One of those was Hamilton, but in the pit entry the Briton clipped the wall, damaging his front wing. The delay to fit the new wing meant he would be one of the last to take to the track and that he would only get one opportunity.

It was McLaren’s Lando Norris who made the most of the conditions to claim his first pole position. Carlos put in a timed lap on intermediate tyres but then he and the team chose the almost perfect moment to switch to slicks. He pitted to take on a set of new softs, going back out knowing he had enough time to do two warm-up laps to get the tyres up to temperature. With just seconds remaining before the chequered flag, he started a flying lap right on the limit, setting an excellent time of 1’42”510, for which he was eventually rewarded with second place on the starting grid. George Russell also made his move at the right time to take P3 respectively ahead of Hamilton who claimed fourth place with his opening lap.

Behind the Mercedes driver, McLaren’s Daniel Ricciardo took fifth place ahead of the second Mercedes of Valtteri Bottas. Lance Stroll was eighth for Aston Martin, Pérez finished ninth for Red Bull and the final top-10 place was taken by Alpine’s Esteban Ocon.

Both Carlos and Charles drove great opening laps. The Spaniard started from the dirty side of the track, managed not only to fend off those behind but also to exploit the slipstream to overtake Lando Norris and lead the race. Charles, who started from the back row, was 12th come the end of the first lap having made no less than seven overtaking moves.

From then on the race was all about tyre performance for the two Ferrari men. Carlos, who started on mediums, began to suffer from a bit of graining after a dozen or so laps, which led to him pitting earlier than his nearest rivals. The situation was better on the hards and the Spaniard was third when the rain came. Charles had a great pace on the hards and he was also competitive on the mediums, to the extent he was fighting for a good position before the chaotic final stages.

As the rain got progressively harder, choosing the right moment to change tyres was the key factor. It all went well for Carlos in achieving 3rd, but Charles came in a few laps later, which cost him dearly, depriving him of a good points haul that had seemed to be within his grasp, 15th scarcely reflecting his drive.

Hamilton made a solid start from fourth place but got boxed in on the inside as the field went into Turn 1 and he was passed by Aston Martin’s Lance Stroll and soon after by Daniel Ricciardo in the second McLaren.

At the rear of the field Verstappen made a good start and quickly began to work his way through the pack. By the end of lap five he was up to 15th place and was closing in on Mercedes’ Valtteri Bottas who had taken an overnight 15-place penalty for changing power unit elements and started from P16. Verstappen soon made his way past the Finn on lap six, powering down the inside of the Mercedes into Turn 13 to steal P14. He then caught Pierre Gasly and two laps later employed the same move to push past the AlphaTauri driver.

There was a nervous moment for the Red Bull driver soon after, though. Ahead of him Charles was attacking Sebastian Vettel. And seeking to profit from the battle Verstappen dived to the right of the Ferrari driver. But fighting for position, Leclerc was unsighted and almost pushed the Dutch driver into the wall. Verstappen escaped and passed Charles at the next corner.2. Vettel was next in his sights and once again the Red Bull driver made the move into Turn 13 .

At the front, Norris was closing up to Carlos and on lap 13 he tucked into the slipstream and powered past on the run to Turn 13 to claim the lead.

Verstappen was on a march and as Sainz, Stroll and Russell pitted ahead of him he rose to sixth place behind Alpine’s Fernando Alonso and found himself just four seconds behind third-placed Hamilton.

Hamilton and Verstappen made their sole visit to the pit lane at the end of lap 22. Hamilton rejoined in P9 on hard tyres with his title rival in 12th place. Hamilton began to make his way through the pack and by lap 30 he was back up to P5 as Verstappen laboured more behind Ricciardo in P10.

At the front, Sergio Perez, still running on his starting hard tyres, now led the Russian Grand Prix. Behind him, Alonso was in P2 ahead of Leclerc, who also needed to pit. Norris was now fourth ahead of Hamilton, Gasly and Sainz.

Charles  pitted on lap 35 but a slow stop dropped him down the order. Perez then pitted from the lead at the end of lap 36 but the switch to medium tyres was hampered by a stuck rear left wheel and when he rejoined the action he was behind Ricciardo who was now fourth behind Carlos, Hamilton and race leader Norris.

Verstappen’s progress had halted, however. The Red Bull driver’s medium tyres were beginning to fade and he dropped to seventh behind Alonso, raising questions about RB’s performance on mediums. Ahead Perez managed to get past Ricciardo to sit in fourth place and as the race entered the final 10 laps and gaps appeared secure it looked like the order might solidify.

However, on lap 46 rain began to fall and as the umbrellas went up in the grandstands the race was suddenly thrown into chaos.

With rain predominantly falling just in the final two sectors, both Norris and Hamilton initially elected to remain on track on slicks. And for a lap it looked like both had made the right choice. But after a brief lull the rain suddenly intensified and Hamilton dived for the pit lane for intermediate tyres, matching a call being made throughout the order. With just four laps left Norris gambled on slicks.

It proved to be the wrong call. Hamilton quickly chased down the McLaren driver and when Norris slid wide in the final sector, Hamilton flew past to take his 100th career F1 win. One has to wonder how long it will be before the young Brit gets another chance of a GP win.

Verstappen though, read the conditions just right. The Dutchman made the switch to intermediate tyres at the right time and after emerging from the pit lane he scythed through the field to claim second place when Norris eventually pitted for inters.

Carlos took third place, with Ricciardo claiming fourth. Fifth place went to Mercedes’ Valtteri Bottas, despite the Finn spending the bulk of the race outside the points. Alonso took sixth, while Norris was left with seventh place. Eighth place at the flag went to Alfa Romeo’s Kimi Raikkonen and Perez, who had also chosen to stay on slick tyres for too long, finished ninth. The final point on offer went to Williams’ George Russell.

Carlos commented: “It’s a happy podium but I think as a team we need to keep analysing what we can do better to make sure next time a Ferrari is leading we are less vulnerable. We’ve got some time before the next race so we will keep pushing”

Charles: ”What a disappointing end to an otherwise extremely positive race! I had a good start, gaining a few positions. Everything looked really promising, I made lots of overtakes and my pace was strong. Things suddenly changed when it started to rain at the very end of the race. Carlos was ahead and decided to pit for Inters, while I still had some doubts. I tried to do another lap on slicks, hoping that the rain would decrease. But it started pouring down and it was just impossible to go on without pitting with two laps to go. That was basically the end of my race, which is a real shame.”

Mattia Binotto: “We introduced an update to the hybrid system for the power unit, which worked the way we had expected and produced a little bit more performance. However, we were not perfect in other areas, for example the pit stops and tyre management with Charles in those final chaotic moments of the race, whereas with Carlos everything went according to plan and we will build on the experience gained today.”