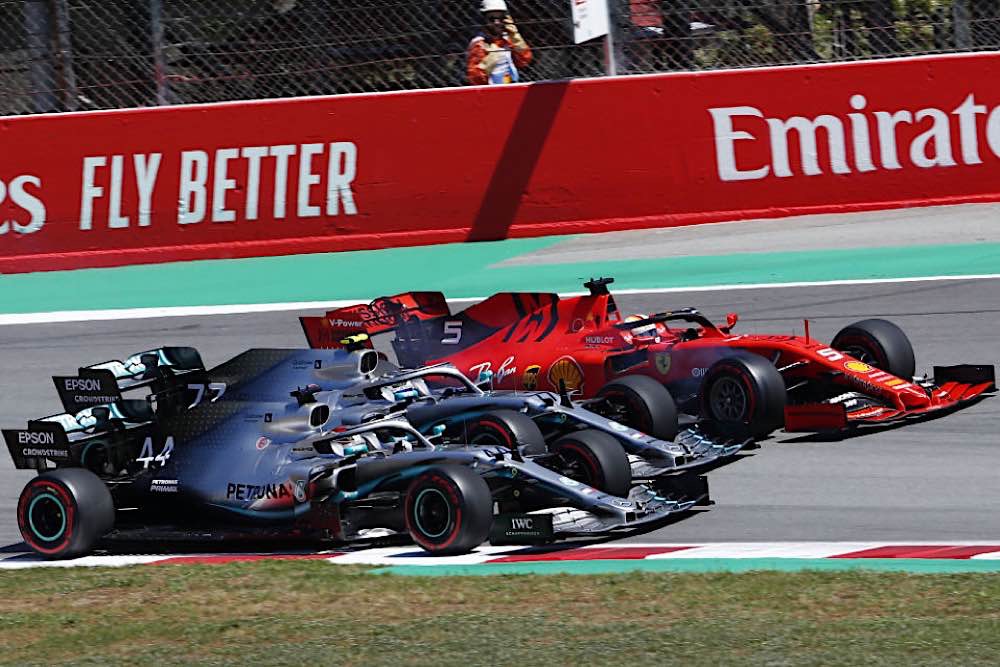 Seb did lead at one point. 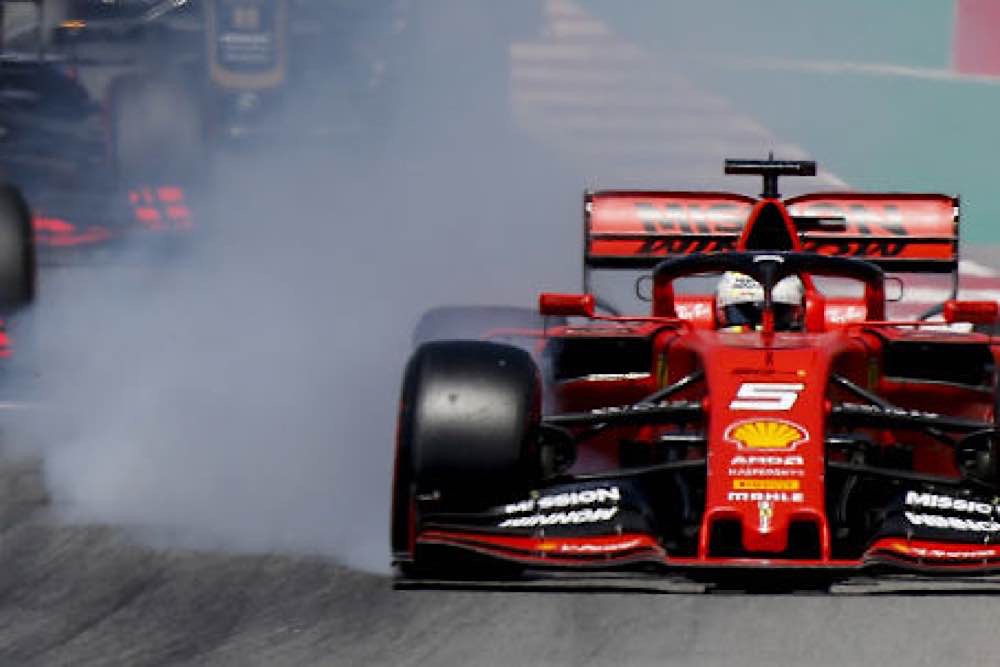 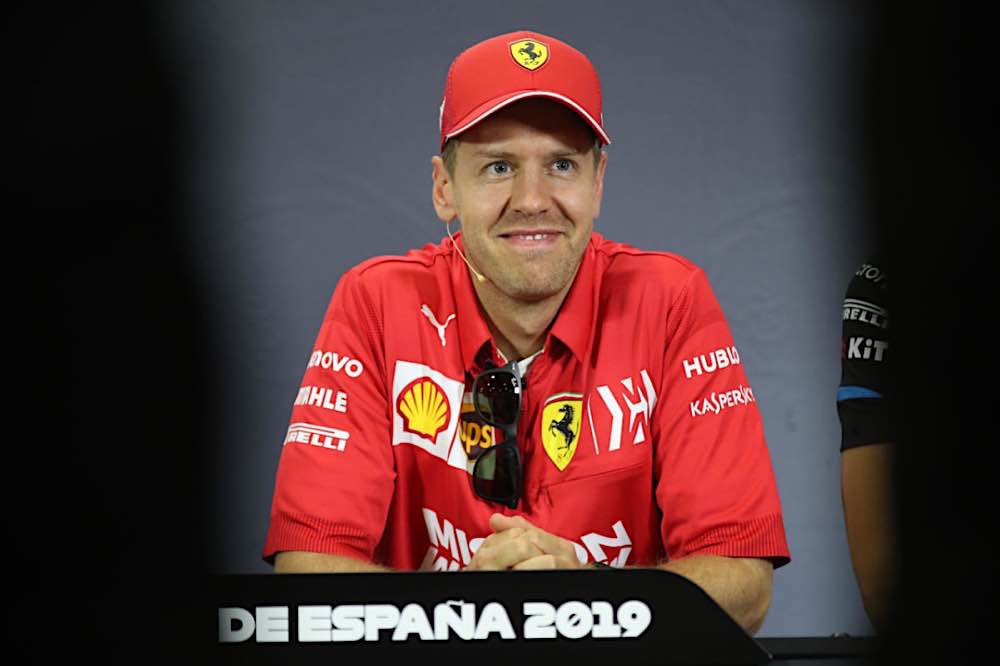 It’s clear that Mercedes had an aero advantage, and whilst all the teams have had upgrades (I gather even Williams put new air in the tyres), sadly, for both Ferrari fans and spectators who enjoy racing, Mercedes’ were the most effective by far. Everything went well for Bottas, and he got an “easy” pole, as if anything in F1 is remotely easy. The 0.6 seconds ahead of Hamilton was not representative because the complexities of hybrids meant his banker lap was compromised and a change in conditions made the traditional last minute banzai impossible.

Even the long Barcelona straight couldn’t make up for the silver superiority. Seb was 0.9 seconds behind Bottas, though most of that was in the final sector where low/medium aero is at a premium. Charles could only manage 5th, a further 0.3 seconds down due to a minor off requiring use of a second set of softs in Q2, hence like Hamilton he had only one attempt. Always hovering, Max Verstappen picked up 4th, 0.3 seconds ahead of team-mate Gasly in 6th. As Max is recognised as “The Team Talent”, that’s probably enough to stop Red Bull ringing the job centre with a “Number 2 Required” ad. This week’s leader of the minnows was Haas with both cars in the top 10, with Kyvat and Ricciardo making up the set.

As usual, the start determined the winner –  Hamilton. “I’m keen to find out why the start was so bad” said Bottas, clearly having learned how to imply engineering conspiracies from Hamilton, if not how to do starts. There was no such issue with Seb who joined them as a threesome. It ended badly, because Seb had to be spectacular to get ahead of the Mercs. He was spectacular, but not in a good way. He locked up, flat spotting the tyre. In the aftermath he veered towards Charles. Avoiding contact meant Charles moved back towards Verstappen, who promptly passed both of them in the third corner. The flat spot stopped Seb’s efforts to chase the Dutchman. Gasly and Grosjean pressured Charles, but he held them off. He was then held up by Seb. It had to be an overtake for Charles to pass Seb because an early tyre change wouldn’t work due to the grip/wear balance.  The hard this week was not only lower grip but difficult to manage, and the medium unlikely to last. Sadly, it was as late as lap 11 when Seb was asked to move over, which probably reflects slightly disappointingly on the team decision, but even worse on the non-passing circuit. Seb lasted another 8 laps on the flatted tyres, getting increasingly tetchy. Even worse, at the stop the left rear jammed, putting him behind the Toro Rossos. Fortunately, pitstops got him back to 5th without any of that silly overtaking stuff being necessary.

On lap 25, Charles suffered the same jamming as Seb on his change to hards. It looked as though the SF90 was a bit harder on its tyres than the W10, but that’s probably a sign of how hard the chase was. In fact, Bottas did have some issues: he later commented how much easier things are in free air, which was why Hamilton was faster than him. There was some confusion in the messages to the Ferrari drivers about strategy, leading to some unseemly jostling, but Seb got ahead and then made a final stop on lap 40. He retook 4th after 5 laps when there was a safety car period due to Stroll and Norris colliding. I always enjoy the official comments so here goes: “The Stewards believe that Norris could have backed out of the attempted overtake into turn 2 and also that Stroll might have been more aware of the possibility that car 4 could be on his inside.” Don’t be pushy, use your mirrors.

The safety car allowed some cheap tyre changes. Charles was able to get rid of the awful hards, the Mercs were able to play fastest lap. The effect on positions was more due to errors than strategy – the Torro Rossos each slipped back a place due to their tyre sets being mixed up, and Grosjean got a little caught out when team-mate Magnussen muscled past and as a result he got passed by Sainz and Kyvat. But this is just fighting for the “B Class” cup. At the front Hamilton and Bottas had an unthreatened 1-2, Seb and Charles worked very hard for 4th and 5th, splitting up Red Bull’s Verstappen and Gasly, whilst the aforesaid Magnussen, Sainz, Kyvat and Grosjean finished the top 10.

For a while it looked as though this would be the last race at this circuit and Catalunya would join Pedralbes (yes, I did have to look that one up), Montjuic Park, Jarama and Jerez in the history books of the Spanish Grand Prix, but there are possibilities of a reprieve. Will anybody care either way?

I promised I would suggest a difficult – and probably rude- answer as to why Mercedes are so far ahead  despite testing results, and despite Mattio Binotto questioning the car concept. Please don’t hate me for saying  that I think there may be a few other factors. A conversation with an insider last week gave some hints. Mercedes are one of the few teams with a formal ISO Quality System. As a result they push inspections of key parts back to the suppliers, which gives them extra design time. For them, everything is a little less rushed. And perhaps that stretches through all matters, because a lot of the Scuderia’s (and other teams’) problems seem to be due to decisions taken under time pressure leading to a chain of issues. Mattio may be right about the car concept, but I can’t help wondering if the management concept may also need a look?