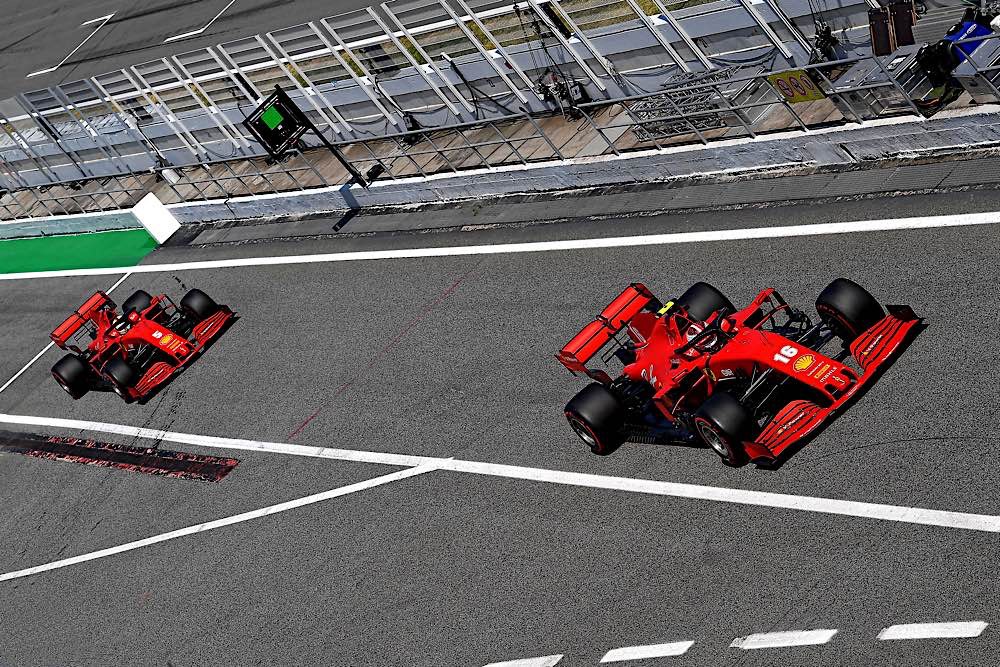 Optimism as the cars formate in the pitlane. 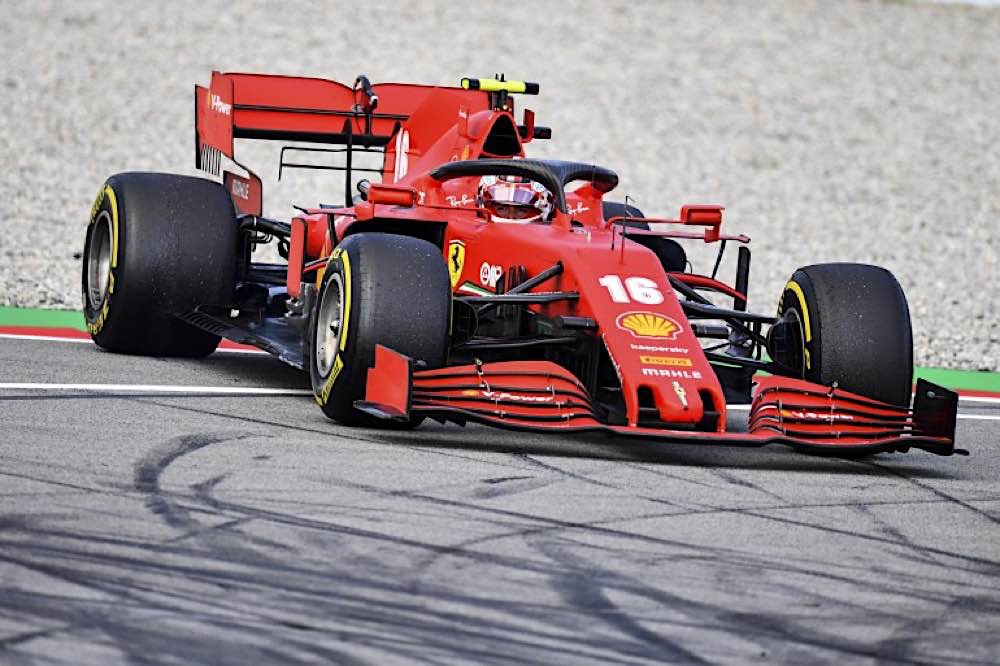 Charles's weekend ended with a spin, from which he restarted - after releasing his belts. 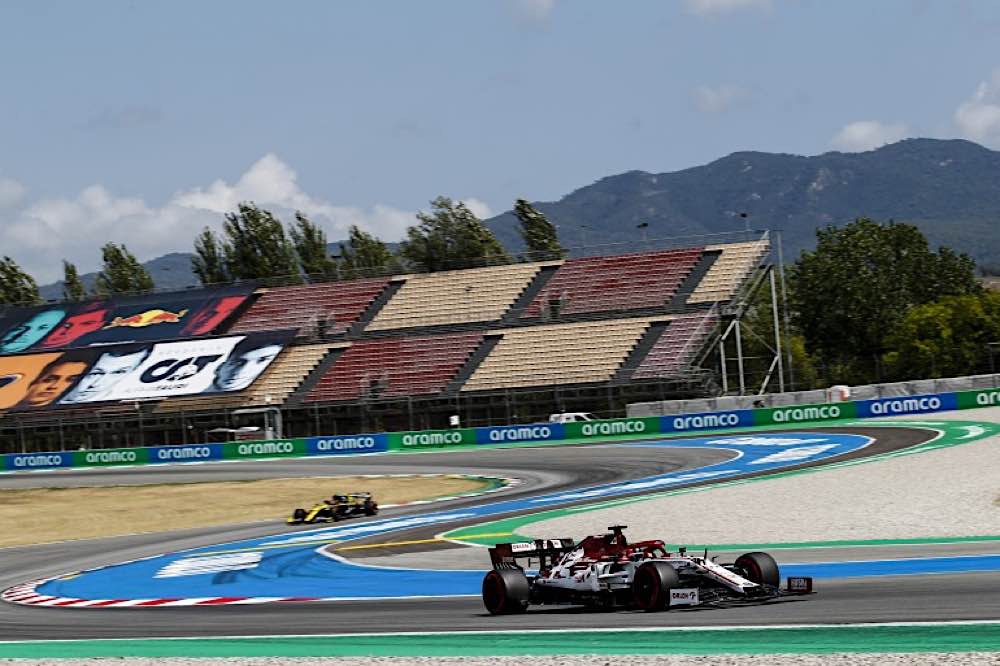 Despite an impressive background landscape, the circuit lacks character.

There’s not really much to say about the result. Hamilton is easily the quickest out there, Bottas trails in his wake despite the odd flash, the Mercs are the best and the Fazzas, well, they’re nowhere. And the sad cap to it all is watching the Vettel/Ferrari relationship falling apart like a tawdry divorce.

There were few joys about this Grand Prix. With a bit of glee I suppose one of them was following the continuing fall-out about brake cooling ducts, which actually had nothing to do with brake cooling but more about whether a customer team could copy the design of a proven winner. Racing Point (the old Eddie Jordan team, remember, and he knew a thing or two about regulations and rules…) are a close customer of Mercedes, using their engines and gearboxes and various other bits and bobs that make up an F1 car, and we are being asked to believe that there are two entirely separate design and build teams who share no illicit IP between them. Fair enough, I of course believe it.

The scenario gets a bit sexed up with Merc boss Toto Wolf being a shareholder in Aston Martin, part-owned by Laurence Stroll (owner of Racing Point) which will morph into Aston F1 next season, so some unreasonable people are thinking that this looks a bit fishy. I don’t.

As always in F1 it’s in the interpretation of the rules. No wonder Mercedes in Brackley have a department of 80 highly skilled people who just scrutinise the rules to see where there’s a loophole. See Brawn double diffuser and push-me pull-you steering.

I had forgotten that the Circuit de Catalunya actually existed. When I first saw P1 it was like a completely new circuit, I didn’t know any of the corners, and it seemed to have all the appeal of Mallory on a wet November Wednesday. Just a few swerves and chicanes, no Hangar Straights, no Eau Rouge, no Degner, no nothing to test a driver and a modern F1 car. But at least it was another F1 race to count towards the total for 2020 that the TV broadcasters need to pay the full whack.

Qualifying was easy to disseminate. Hamilton was quickest in all three sessions with Bottas up next and less than a tenth behind. Verstappen as expected followed but nearly three-quarters of a second behind the lead Merc. The Pink Mercs then followed, with Perez making a welcome return to his seat following his bout as a Covid carrier.

The Ferraris struggled again, Leclerc down in 9th and Vettel not even making the final cut, just 11th despite having a new chassis. It’s all sad to see and of course one wonders whether this relationship will actually make it through to the end of the season.

The start was easy for Hamilton but Bottas again fluffed his, being passed by Verstappen and also Lance Stroll, up from fifth on the grid. With tyre degradation still a hot topic (see Silverstone) it was expected that Max would be able to trouble Hamilton up front but no such luck. The Merc steadily pulled away as the dreaded ‘tyre management’ phase took over. Lap times were now in the 1:23secs mark as cruise control kicked in. How dull for everyone, compared to lapping in 1:15secs in qualifying.

Bottas had gone past Stroll with DRS but third was all he could manage, he never troubled Max let alone Hamilton, not even when the latter had a tardy pitstop with a sticking wheel. The top three finished roughly 20secs apart, and the rest of the field was lapped, in other words on a different planet. Not a great advert for a race. I also watched the F3 and F2 races and there was some superb wheel-to-wheel stuff going on, with engines popping and banging and flames coming out of exhausts. I’ve always thought that the World Championship should be for these much simpler cars instead of technology monsters that no one can comprehend, including most of the teams.

What about the rest? The Pink Mercs were good again, Perez running in fourth although a late 5-sec penalty dropped him to fifth just behind his team-mate Stroll who seems to be getting a bit better than his rich-Dad image of before. The Maccas got Sainz into 6th place, still wondering what he’s done to give up that re-energised team. And as for the Ferraris, well, they had a torrid time. Leclerc was running quietly in the midfield when his engine cut and he retired to the pits with an electrical fault. Vettel had a similar quiet run but a late decision to make the race a one-stopper instead of the more normal two enabled him to finish 7th, albeit with the indignity of being lapped by Hamilton.

There’s not much on the horizon to cheer the tifosi up, whilst other teams are getting stronger and the Ferraris are in danger of being swamped by the close midfield. Those engine downgrades agreed secretly with the FIA have certainly taken their toll…

The final words go to Mattia Binotto, the Team Principal:
“A very disappointing weekend, not just because of the result, but also because of the way we managed it. In qualifying yesterday, we didn’t make the most of the potential at our disposal and we know how important grid position is on this track where overtaking is so difficult.”

“Despite that, in the race we had a genuine chance of fighting for fourth place with Charles, but a reliability problem put him out of the running. A malfunction in an electronic control unit resulted in his car shutting down, causing him to spin, effectively ending his race.”

“Sebastian moved up the order well, showing great tenacity and driving very cleanly: doing a 36 lap stint on used Soft tyres is quite something. The same observation goes for him as well as for Charles: starting further up the grid he could have aspired to do better than seventh”.