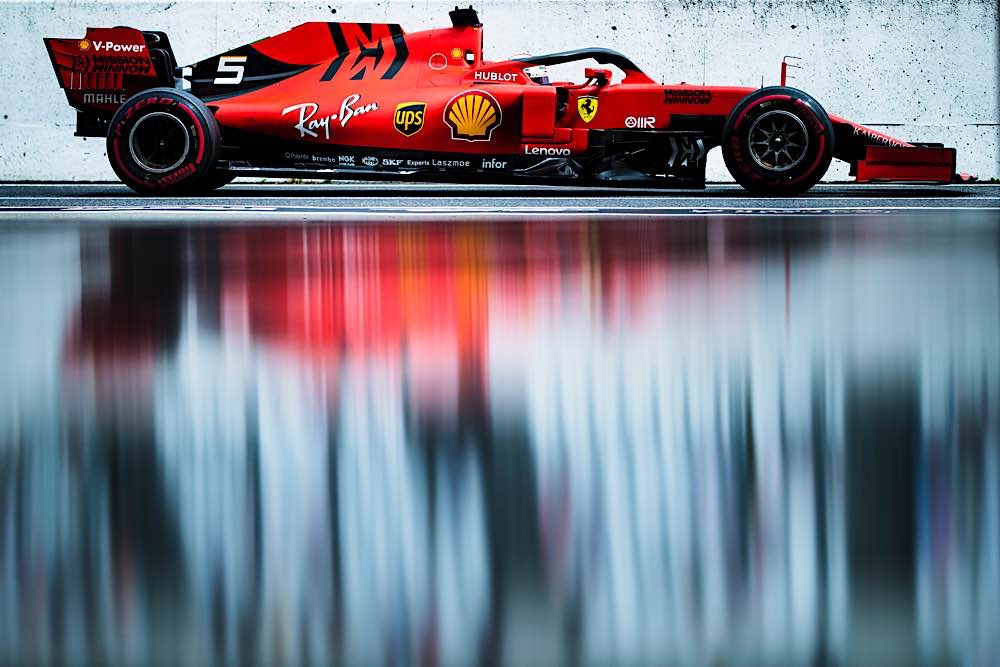 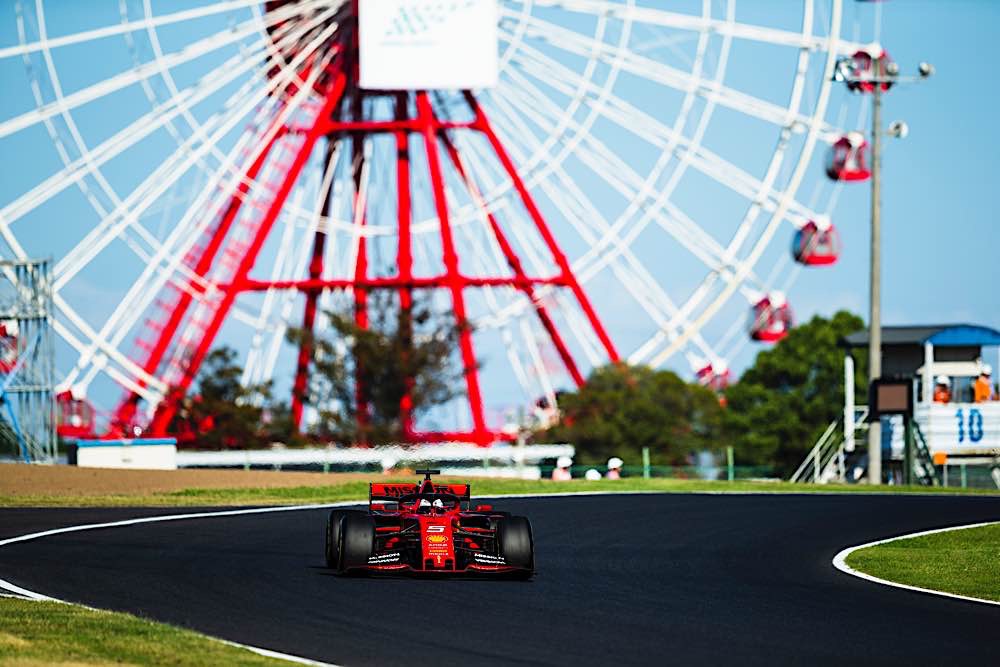 Big wheel forms a man-made background to the circuit... 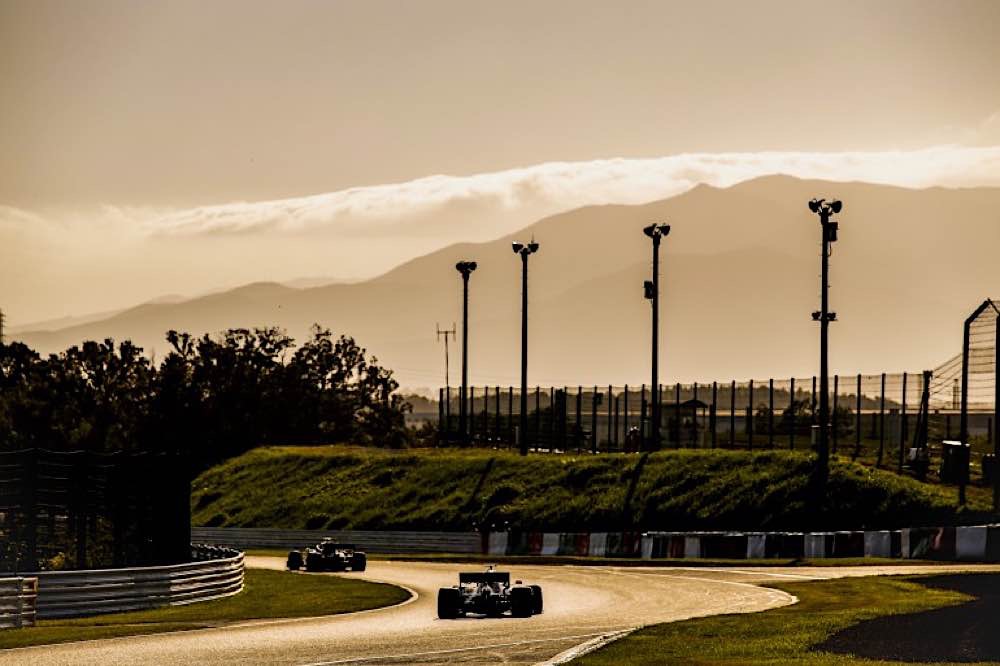 Despite the best efforts of Typhoon Hagibis and the undoubted resources of the Scuderia and Red Bull, Mercedes AMG Petronas sealed their 6th consecutive Constructors’ and Drivers’ Championships at Suzuka. While this may be difficult to stomach for we Tifosi, perhaps the Mercedes domination owes something to the Ferrari domination at the turn of the Century?

Remember those great days of Schumacher, with the FIA even changing the scoring system in an attempt to prolong interest in the World Championship beyond the Summer? Well the backbone to that domination was founded after Schumacher’s defection from Benetton and by 1997 the team comprised, amongst others Jean Todt as Team Principal, Ross Brawn as Technical Director, Stefano Domenicali as Team Manager and Nigel Stepney as Chief Mechanic. Backed up by Schumacher’s brilliance and capable No2s in Rubens Barichello and Eddie Irvine this team remained in place until the end of 2004 when the Scuderia sealed their 6thconsecutive Constructors’ Championship. Compare this to the current Silver Arrows domination where Toto Wolff, Andy Cowell and James Allison (preceded by Paddy Lowe) have been constant figures since 2013, helped by the considerable talents of Lewis Hamilton who has had Peter Bonnington as his race engineer since Lewis left Mclaren in 2013. The similarities are quite revealing, with one clear link in that Ross Brawn also set up the Mercedes dynasty before his departure when the hybrid era commenced. A stable, motivated team thus appears to be one pre-requisite for sustained success, further emphasised by the Red Bull domination of 2009-12 (Horner/Newey/Marko/Vettel). Hopefully the Ferrari personnel can remain stable for 2020 so Mattia Binotto can further develop his team to lead the Scuderia challenge to Mercedes, as with stable regulations for 2020 the variables are reduced.

Regulations for 2021 were the background story in Suzuka, with talk of six teams being against the FIA’s latest proposals. While Mr Brawn may be very busy trying to develop unity, it does strike me that the current manufacturers may not be around, at least in their current guise, for 2021. Renault, having seen their proposed F1 technical collaboration with Mclaren snubbed, are unlikely to be supplying engines to any other team in 2021, so will the costs be overbearing, precipitating a departure at the end of 2020? With the Renault Chief Executive Thierry Bolloré being recently ousted, the Nissan links under question and global car sales plunging, can Renault really afford F1? A similar story is in place at Honda with a Board restructure questioning their future participation against a backdrop of falling sales and the uncertainty over future power source. Mercedes are embracing electric technology in their motorsport offering for 2020. Perhaps they will leave their customers to fly the Mercedes flag from 2021? If Mclaren win it will be due to the engine and if they lose, well its Mclaren …  Certainly if Mercedes win as a factory team in 2020 where can they go from there – more domination? Which could leave Ferrari as the only participating manufacturer team in 2021, a throwback to the mid ’70s! While this all sounds very negative with the changing markets and Formula E going from strength to strength, assuming F1 will retain its motorsport dominance may not be sensible and Liberty/Ross Brawn will have much bigger issues than finalising the 2021 regulations.

While speculation abounds the Japanese GP was held under the shadow of Typhoon Hagibis. This led to all track action at Suzuka on the Saturday being postponed, so that qualifying and the race all occurred on Sunday, which was logistically possible because the only other track action on Sunday was a short Porsche race, but would certainly not have been as easy to achieve at, for example, Silverstone where F2, F3 and Historic F1 races were also scheduled.

After Friday’s free practice Mercedes seemed to be the team to beat, particularly as their high downforce setting is particularly suited to the Suzuka circuit, explaining perhaps their unbeaten record in Japan in the hybrid era. Qualifying however was still affected by the remnants of the typhoon winds which apparently affect the front wing of the Mercedes and Red Bull far more than the Ferrari. Consequently, a front row lock out for the Scuderia resulted, with Sebastian outqualifying Charles for the first time in nine races, continuing his good form since Monza. As is often the case at Suzuka the grid was then determined primarily by team, so Mercedes occupied row 2, Red Bull row 3 and Mclaren row 4, and maybe it should have been Haas on row 5 except Kevin Magnussen had been blown off track exiting the chicane earlier in qualifying and so could not back up Grojean’s 10th place on the grid.

With overtaking being difficult at Suzuka and track position so important hopes of a good result for the Scuderia were high. Sebastian however suffered a very poor start after initially dropping the clutch before the red lights were out, which seemed to affect Charles with the result that Bottas from 3rd on the grid in his Mercedes led into turn 1. Vettel had somehow held onto 2nd, with Charles in 3rd alongside the ever-optimistic Max Verstappen, and he understeered wide on exit pushing Max into a spin and damaging his nose in the process. He held Hamilton off for 3 laps, but an inevitable pit stop for a change of nose was required, together with any hopes of a podium finish.

The race soon settled into a Bottas, Vettel, Hamilton procession, with the only real variable being tyre wear. The typhoon had totally cleaned the circuit on any rubber deposited on Friday, so tyre wear was high, and unfortunately for Ferrari their relative lack of downforce means the car slides more and thus suffers greater tyre wear than Mercedes, and so Vettel pitted on lap 16 in order that Hamilton did not overtake, but Bottas mirrored the move a lap later to restore the status quo. By lap 31 Vettel was in again, by which time Bottas had extended his lead to over 10 seconds, and so he did not pit until 5 laps later, re-joining with a healthy lead which he held until the chequered flag. Vettel however had to work hard to counter a late charge from Hamilton, on softer tyres which were 10 laps younger, but he used the Ferrari straight line speed advantage to offset Hamilton’s quicker overall pace and thus held onto 2nd. Unfortunately, Charles could only recover to 7th place and so with only 4 races remaining in 2019 Mercedes tied up the Constructors championship, while only a Mercedes driver can now be drivers champion, although a Ferrari driver could still be second as Bottas is only 53 points in front of Charles.

Behind the top 3 Alex Albon came through to 4th for Red Bull, his best result in his short F1 career, but nearly a minute behind Bottas, and perhaps not the result Honda were looking for at the home race, particularly as Max retired after his incident with Charles. Of academic interest was that Alex’s fastest race lap was almost identical to the Ferrari fastest lap from the 2004 GP, suggesting overall race lap times have moved little, despite this year’s Pirelli tyres being much more durable.

Carlos Sainz was 5th and the only other unlapped runner, easily winning Division 2 again. Unfortunately Norris in the other Mclaren suffered from being hit by debris from Charles’s car on lap 3, leading to an early pit stop, and resulting in an eventual 13th place finish. The other points finishes were Ricciardo, Gasly, Perez and Hulkenberg. Perez was particularly lucky as he finished the race in the turn 1 run off area after a late move on Gasly on the ‘final’ lap, but due to a timing error the race distance was reduced by a lap and so his Racing Point collected 2 points. How F1 can be reduced to such a farce when it appears to be so sophisticated is beyond me.

As for the Ferrari engined cars Alfa struggled all weekend with Kimi managing 14th and Giovinazzi 16th. How they would perform without the best engine in F1 at the moment is open to question. Similarly, Grosjean suffered the common Haas grip/tyre issue in the race, being unable to reproduce qualifying form and quickly faded from his 10th place on the grid finishing 15th between the two Alfas, while Kevin was the last car not to be lapped twice in 17th.

Post-race Charles suffered two penalties, amounting to 15 seconds being added to his race time for his collision with Max and driving a car in an unsafe condition; a poor end to a day which promised so much for the Scuderia. Roll on Mexico….