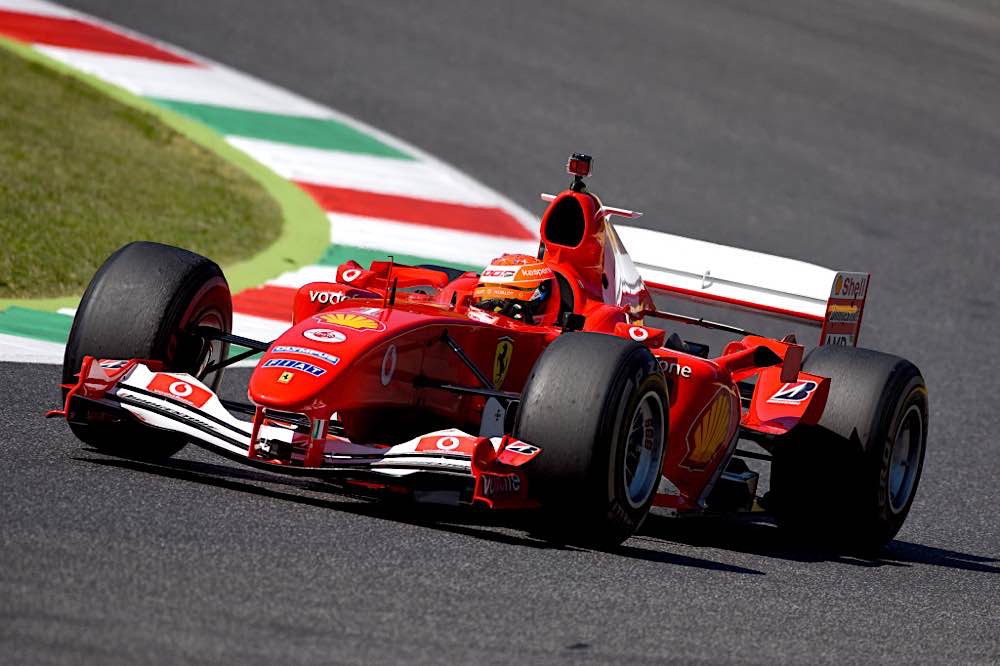 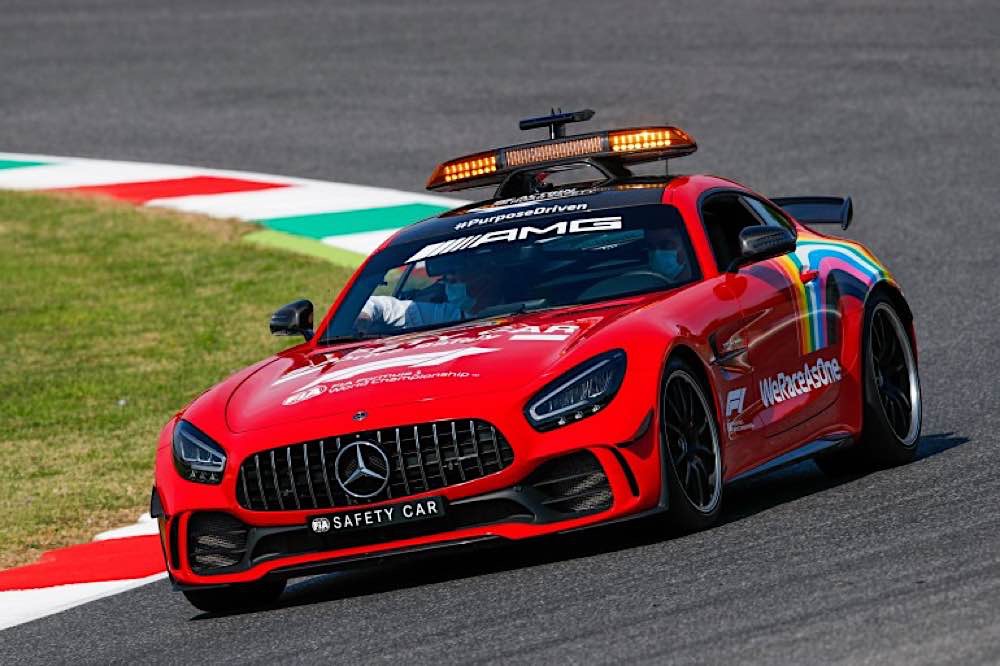 Safety Car was perhaps the most important car of the day 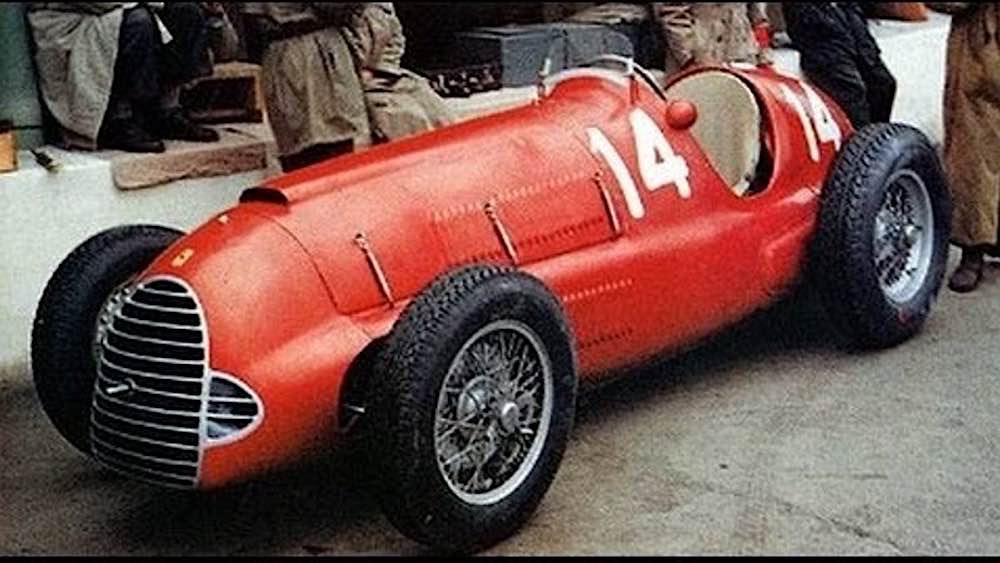 To celebrate its 1000th Grand Prix, Ferrari painted the SF1000 maroon. This reflected the colour of the first Ferrari racing car, the 125S sports car. A rather cheap jibe would be that “maroon” is also defined as a signal of alarm or warning, which seems appropriate for the current car, but instead, let’s go back to that 125S and its drivers. Cortese and Biondetti are scarcely in the forefront of 50’s GP drivers, the latter having entered one GP in a “Ferrari-Jaguar” – the mind boggles. In any event, even though sports cars were a support formula to the Grandes Epreuves of the day and the 125S engine was developed for the 125 F1 car which made the team’s 1950 Championship debut in Monaco, the Scuderia clearly didn’t see them as strong candidates; the well-established Ascari, Villoresi, Sommer and Whitehead were chosen. This has generally been the policy of Ferrari over the years – to choose known drivers, and there has never been a lack of candidates.

However, Charles Leclerc is a recent exception – a product of the “ladder” system, having driven for the feeder team of Sauber for a year before promotion. The ladder now extends downwards to Formula 2, where at present there is almost an embarrassment of riches. At the time of writing, the Ferrari Academy drivers rule the Formula 2 championship.  Mick Schumacher leads, Brit Callum Ilott is second and Robert Schwartzman is 4th. Pleasantly dominant, as they say.

But to bring any one of them in, somebody must go. Could I suggest, not as a rule but as a team management practice, that any driver who has not shown signs of over-delivering and therefore being capable of winning a Grand Prix after 2 years should be put out of his misery? And also any former winners past their sell-by date who are unlikely to win again? If Alfa and Haas survive, that would free up four places, though I might make an exception for Kimi for entertainment reasons. Under my suggestion, three hungry newcomers would be there to keep Charles and Carlos honest.  It would be good to see the other teams applying this approach too.   Racing Point have removed Perez so perhaps they’re ahead of me. Get that new broom out – new, fresh talent always keeps the interest up.

I’m not sure whether Ferrari-owned Mugello can be described as new and fresh, even if F1 hasn’t raced there before. Located 120km south of Maranello and 40km north of Florence, it was built in 1974,  to replace a road circuit. It has high speed corners and gravel traps to catch the over-enthusiastic. The track is a public road-type surface rather than the super-smooth tracks normally used, meaning the tyres have less work to do. In summary, precise bravery of the old school is needed. This could be a drivers’ race.

After squeezing into Q2, Seb could only manage 14th, not wholly at home with the car. Charles got through on softs, and in the final shoot out with fresh tyres improved to 5th.  He was happy with the car: “I think our medium-downforce package is better in terms of balance compared to our low-downforce one that we were running in Monza and Spa. I was struggling to drive the car there, and here I’m a bit more at ease with it, so I had more confidence and that also helped today.” Whilst it was pleasing to see a maroon car so highly placed, not many Tifosi held their breath for a result.

It goes without saying that HamBotStappen filled 1-3. A cynic might say that Albon in 4th was a much-needed response to Gasly’s Italian win. Charles almost appeared as an interloper in 5th ahead of the Racing Point pair, while Ricciardo in 8th could only think back to Monza with nostalgia. Team-mate Ocon joined him in 10th, splitting the 2 McLarens with next year’s Ferrari Number 2 ahead of jolly-coloured-helmet enthusiast Lando.

How much time have we got?

There was some interest when Bottas beat Ham away, but things got really interesting when Verstappen’s power unit stumbled.  He dropped through the field, which would have been bad enough, but then the 2 Pink Mercs and Carlos Sainz went three abreast into turn 2. It appeared that in trying to keep the RP’s separate there wasn’t enough room for Sainz who touched the leading Stroll and spun. Apparently independently but simultaneously Raikkonen, with Gasly and Grosjean alongside, was slightly untidy, the three came together and chaos ensued. The slowing Verstappen was then rear ended by Gasly and Raikkonen  into the gravel trap. Amazingly, Seb steered right to where Carlos was spinning rather than for the gap, and by the time he got there he missed him by millimetres. That Days Of Thunder trick works then… Whilst the incident was chaotic, it was assessed by the stewards as a first lap incident, with no blame apportioned. A safety car was put out, Gasly and Verstappen were out, and after 6 laps the restart took place.

Bottas weaved about a bit as he approached the lights for the restart, as he is entitled to do, but before the lights changed the back group accelerated, then slowed suddenly. I’m deliberately vague because the FIA were too. They concluded that “the root cause of this incident was the inconsistent application of throttle and brake, from the final corner along the pit straight” by the 12 drivers at the rear of the field, and gave them all a warning. Is 12 warnings for one incident a record?  In any event, it was chaos. Once again the strength and inherent safety of the cars was proven when Giovinazzi  hit a slow moving Magnussen, putting them both out. Also eliminated was, ironically, Sainz because he had escaped the first lap carnage despite his mid pack spin. With cars everywhere, the red flag came out after a short safety car period.

At the second start, Charles initially stayed in third which he had inherited from RedBull’s troubles. With Hamilton in his customary lead after turn one, Charles gave us some reason for optimism, but in truth he was driving hard to stay in place as the Mercs drew away and the Racing Points pressured him. It was still lap 18 before he relinquished the place to Stroll and, on the next lap, he lost out to Ricciardo, who made the pass look easy and went on to run 3rd for a while. (If the Aussie is that quick in the Enstone car, could a returning Alonso strike a blow in it for pension age drivers next year?) [No- Ed].  Next, Albon further demoted Charles who pitted for new hards on lap 22 as a change of strategy. As he was back for mediums on lap 38 the strategy was presumably unsuccessful, especially as Seb followed it by coming in for hards and then softs shortly after.

On lap 43 Stroll went off hard at Arrabbiata 2, skating across the gravel into the tyre wall. He instantly blamed a puncture, but whatever the reason it genuinely didn’t seem to be Stroll’s fault. Recovery teams aren’t currently having a good time (see Seb’s recovery last week); this time the Racing Point set itself on fire during the operation.

After another red flag, the third start. The good news was that both maroon cars were still in the race, the bad news that they were 8th and 10th out of 12. All cars restarted on softs for 16 laps, and to the amazement of all viewers, all 12 finished. Hamilton drove away to victory, but Ricciardo got ahead of Bottas for a while. Normal order was restored when Bottas and, a couple of laps later and more impressively, Albon swept past.  It was good to see the young Thai/Brit on the podium for the first time, and the choice between Gasly and Albon must now be very difficult for the Moguls of the Taurine Empire.

The order of all 12 cars remained unchanged from lap 51 to the finish, which on most days would be a dull end but after all the activity was almost a relief.  Riccicardo ended a disappointed 4th, followed by Perez, Norris and Kyvat, before reaching Charles in 8th. Each car had a respectable (3-6 sec) gap from the next, and it was only when Seb was approaching the flag that two cars came round with under a half second between them. Sadly, Kimi was the one just ahead in 9th, so Seb just picked up a point.

Will Mugello return to F1 in the future? I doubt it. The entertainment value was high and it’s spectacularly fast. I love it, and so do others I’ve spoken to. But with other Italian tracks available, it isn’t as practical a proposition for spectators and, arguably more importantly, Corporates and The Paddock Club. It was great to see the Scuderia’s 1000th Grand prix at their home track, but sadly I think we now wave a tearful farewell to the 1970’s and this part of Tuscany, and return to the current millenium and the World of Tilke.

Interesting was nice for a change