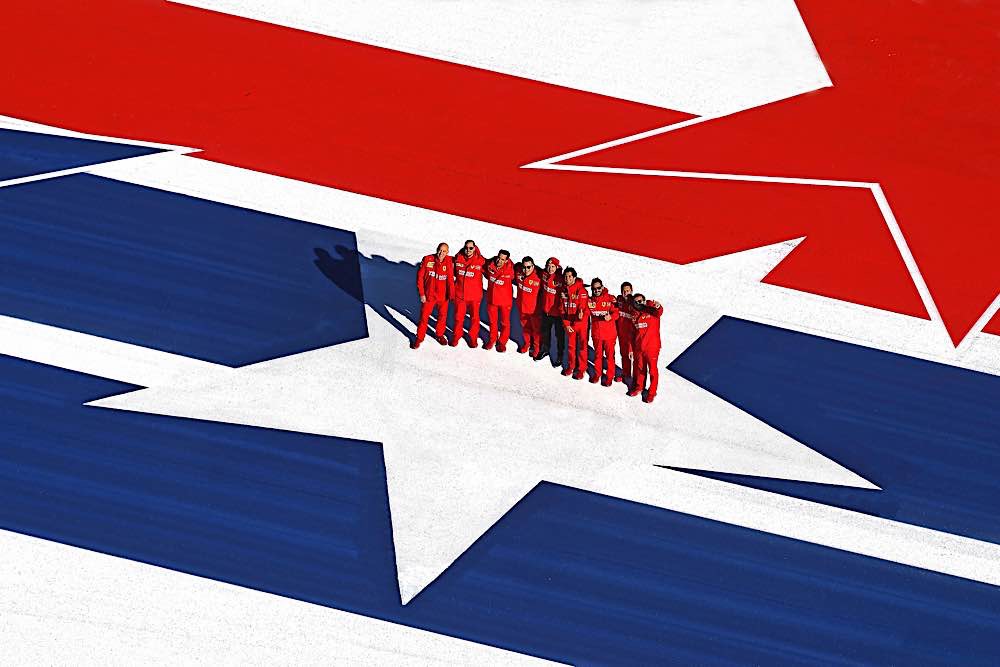 Stars 'n Stripes with the team 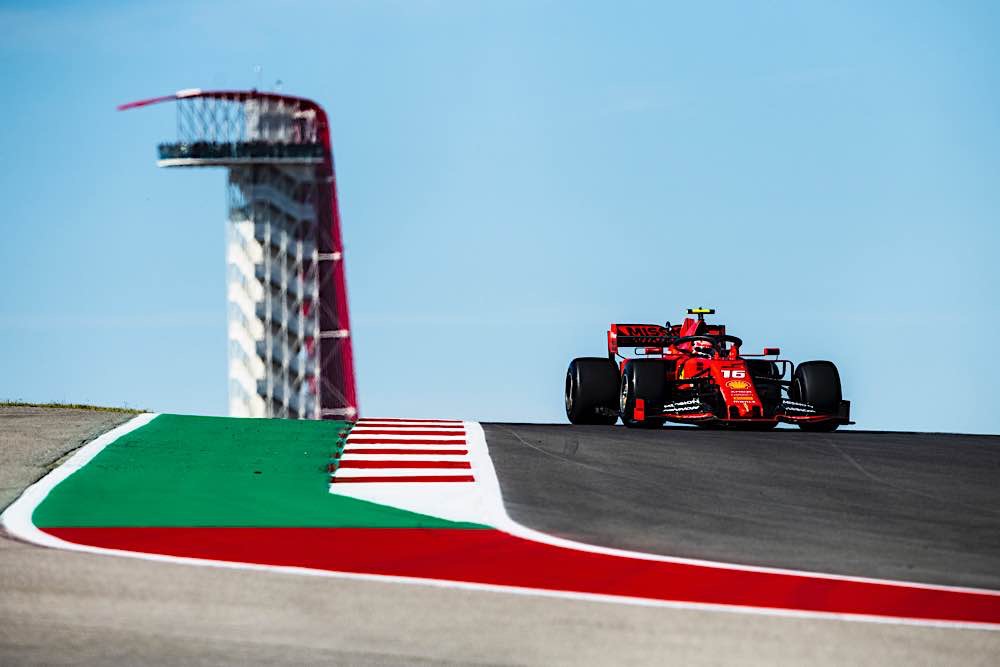 Charles appears over a blind brow 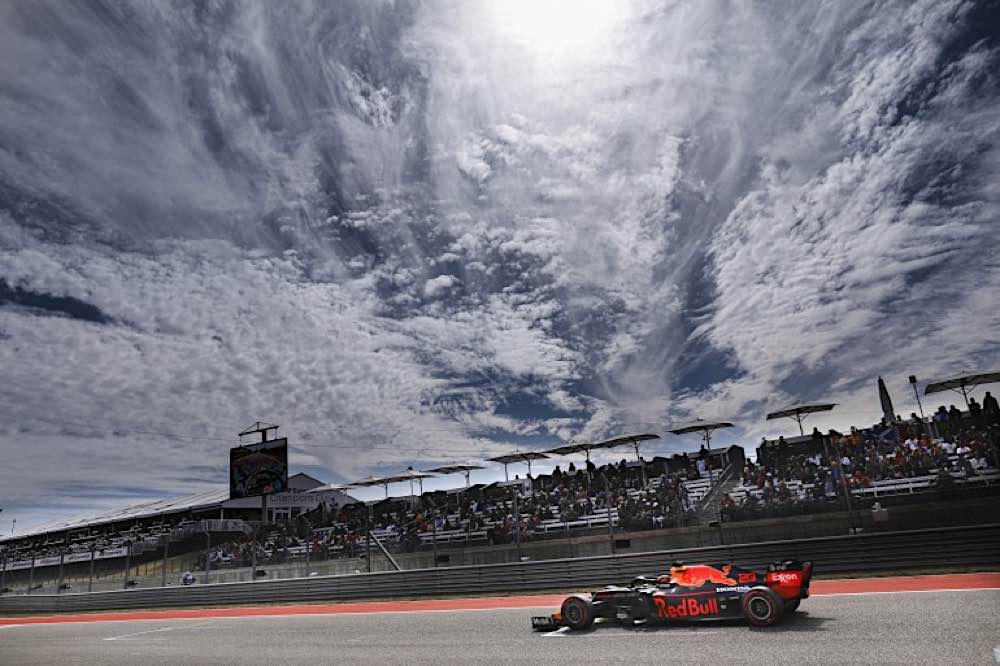 A cloudscape forms a dramatic backdrop

Spoiler alert: Hamilton has won the World Championship again. The last few years have seen Mercedes/Hamilton dominate, and we fans want a change. We thought we might be getting it, as Ferrari have challenged in recent races. It all fell apart in the first few minutes of the race at Austin, but that’s motor racing and disappointing but understandable.

What was unacceptable were the comments of Max Verstappen following the team’s performance. Never renowned for his tact on the track, or indeed his intelligence during a race, he said after the race that Ferrari’s performance at Austin was “what happens when you stop cheating”. Red Bull had asked for a clarification about measuring fuel flow, perhaps believing that the recent Ferrari performance was due to using the rules to gain a benefit.  Perhaps Verstappen needs to be aware that pushing the rules envelope is what F1 design is all about. He could always ask Adrian Newey if he wants confirmation of that approach. He should also be aware that suspension breakage and understeer are not usually symptoms of reducing power output. About the kindest interpretation I can put on his generally offensive statements are that he was showing that Red Bull are in the vanguard of diversity and inclusion by giving drives to those of limited perspective.

Qualifying issues started in FP3. Charles had an oil leak which resulted in an engine change to a lesser spec unit. The lack of an explanation for the problem led to concerns for both Charles and Seb.  Despite this Seb managed second on the grid with a time only 12/100 slower than poleman Bottas, whose masterful first Q3 run proved impossible to beat. Charles, with the old spec engine, managed 4th.  They had both suffered (along with others) from the bumpy nature of the circuit, a function of the underlying Texas terrain rather than the Austin tarmac.

Verstappen was sandwiched between the Ferraris in third, while Hamilton was behind Charles, later identifying the reason as inadvertently changing the brake bias. Albon was 6th on the grid, meaning the top places were again the prerogative of the “big 3”, while McLaren (Sainz and Norris) took the next places.

If Bottas was in good form for qualifying, he didn’t lose that form in the race. He had a good start and made no significant mistakes on his run to victory. Verstappen, having a good start from third, on the better side of the track, did try to pester him on turn one. Confusing “lap one” and “the race”, the Dutchman managed to tag his own front wing on Bottas’s rear right, which would prove to be a very minor issue but enough to damage his challenge for the other 1,119 corners which a 56 lap race involves at Austin.

Seb, however, was on the slippy side of the track, but was suffering from rather more than just that.  The car, looking so good in qualifying, was understeering and braking badly. Why the balance should have gone was a mystery, at least for the first 7 laps.  He had been passed on lap 1 by Hamilton,  Charles and Norris, and then by Ricciardo on lap 2. Clearly all was not well.   Then the “upper arm” (Binotto’s phrase)  of the right rear suspension collapsed and he retired on lap 8. Vettel protested his innocence of undue kerbing, and the evidence that the fault was there from the start is visibly in his favour and supported by Mattia.

Charles, also on the dirty side of the track and slightly hampered by Seb’s slow start, lost a place to a charging Hamilton.  Whilst not as badly off as Seb, he had some issues with the medium-shod car. He said after the race “It was difficult to find the grip and we have to look into how exactly that happened. The other two stints were a bit better, but not good enough.” He was part of a threesome with Sainz and Albon around turn one, which ended with Charles clear, while Albon took off over the Spaniard, ending with a very damaged nose, and a visit to the pits for replacement. He would ultimately make his way through to 5th, which was a pity for him as he could have challenged for a podium place.

It’s common to describe McLaren as best of the rest. Unfortunately at Austin, that dubious honour fell to Ferrari and, specifically, Charles. He occupied a lonely, distant 4th place for 53 of the 56 laps, the gap being such that he didn’t lose position on his second tyre change but was never close enough to third to challenge or gain from stops. The race is best summed up by Mattia who said “Charles’ race was compromised by his first set of tyres, on which he had no grip at all. We could not understand why he was so slow and off the pace. In the second and third stint he had good pace, but it’s difficult to compare it to that of the others, as everyone was in a different tyre situation at that point. In the final stint, he then found the car much more to his liking on soft tyres and set the fastest lap.”

The podium order was determined by two pieces of optimism, being Verstappen’s damage-causing move in turn 1 lap 1, without which I believe he could have won the race, and Hamilton’s attempt to do a one stopper, which was a good try for the win, and worth it as there was nothing to lose. The result was he shadowed Verstappen conservatively for 13 laps, briefly lead on the first stops, and then returned to third. As Bottas and Verstappen stopped a second time he again inherited the lead, and it looked as though he might just squeeze the victory. But Peter Bonington on the pitwall knew otherwise from the degradation numbers, and sure enough on lap 52 Bottas went into the lead, though not until he had been pushed off the road by his team-mate in an earlier passing attempt.  Bottas seems to have that Finnish characteristic of staying calm, just getting on with the job in hand and this week it was well rewarded.

Verstappen, also on fresh tyres, was faster than Hamilton at the end, but that isn’t good enough and he ended in 3rd, ahead of Charles and Albon. His attempts were thwarted by yellows for Magnussen’s Haas, in the scenery with brake failure.

Ricciardo upset the form book by being ahead of the Maccas, achieved with the benefit of a one-stop which worked for him as surely as it didn’t for Hamilton. Ricciardo seems to be the master of tyre preservation. In the McLarens, Norris (two-stop) beat Sainz (one-stop). Which left 9th and 10th. It looked as though Gasly would finish well but he and Perez came together, putting him out. Perez then got into a battle with Hulkenberg and Kyvat. Hulkenberg was undoubtedly the winner as he finished in 9th, while Kyvat, to quote the stewards who awarded a 5 second penalty, “dived down the inside, had a small lock up and bounced off the kerb, which moved the car to the outside of the exit of the corner, colliding with Perez”. As a result, Perez got 10th and the demoted Kyvat wasn’t happy.

After the race, the crudeness of Verstappen’s attack and the albeit justified self-aggrandisement of Lewis (“it’s been so hard. Only athletes at top of their game can relate to it”) contrasted with the gentlemanly praise of Seb, Charles and Mattia for the Brit’s 6th championship. Grace in defeat and adversity is the mark of gentlemen. Others in the paddock could learn.